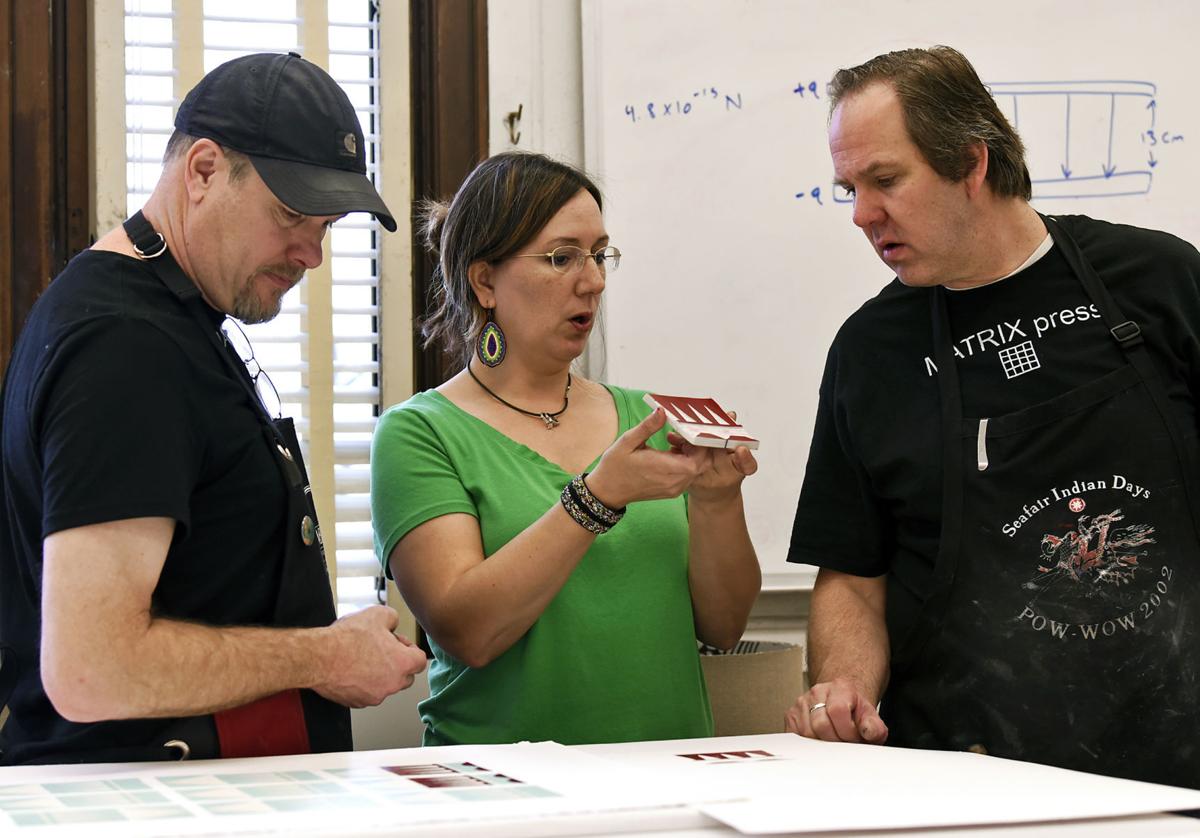 Molly Murphy-Adams discusses a rubber printing block she's using to make a print with University of Montana professors James Bailey, left, and Jason Clark on Thursday in the print-making studio in UM's Fine Arts Building. Murphy-Adams is at UM for a print-making residency for Native contemporary artists sponsored by the Missoula Art Museum and UM's MATRIX Press. 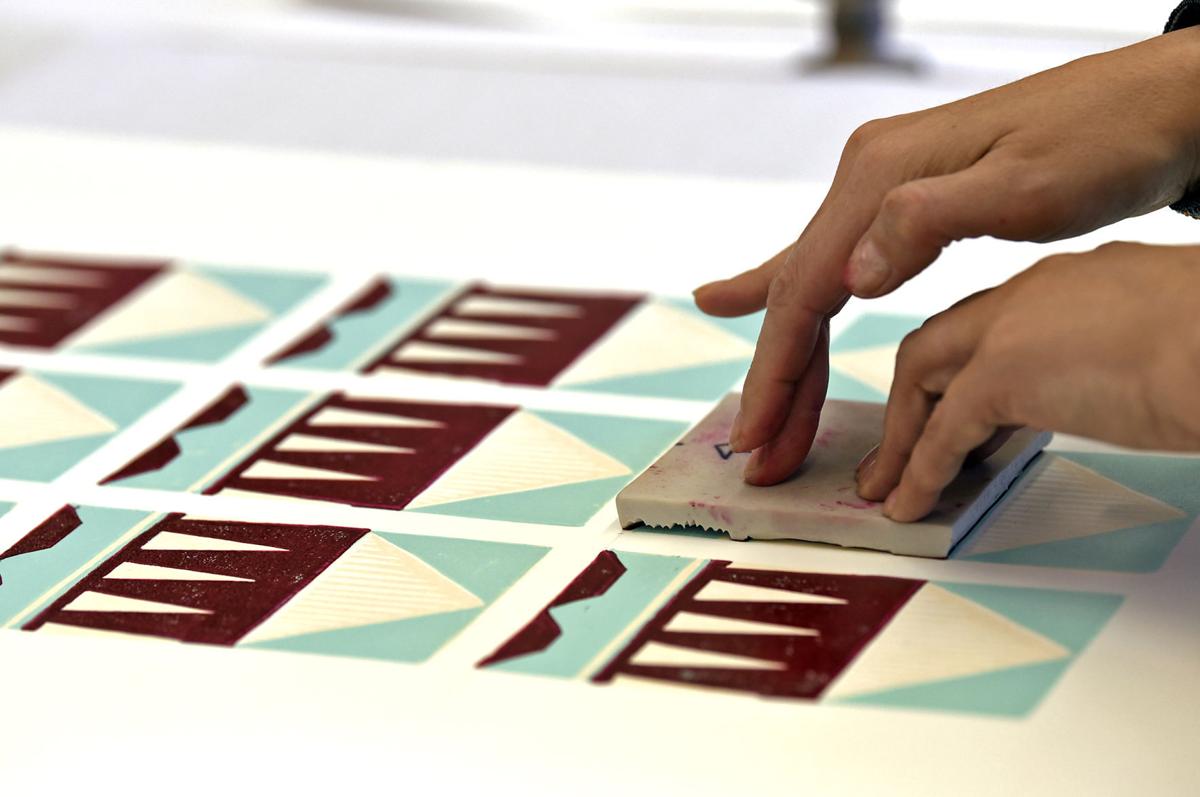 Murphy-Adams presses a rubber printing block onto geometric designs to add another layer of color to her print. Her designs and color palette are inspired by traditional Native beadwork. 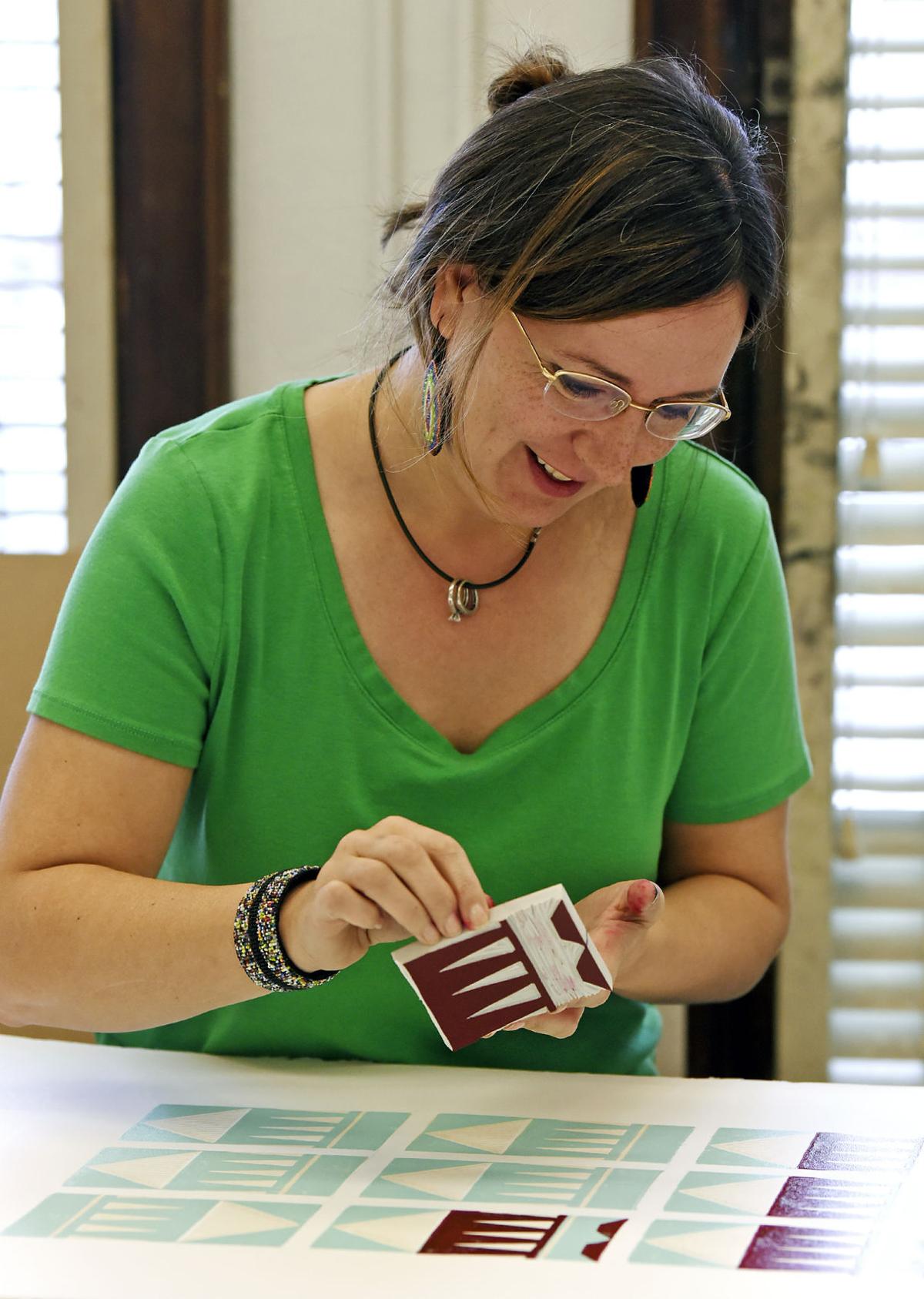 Molly Murphy-Adams works on a print in the Fine Arts Building at UM on Thursday. The UM graduate, who now lives in Oklahoma, began using the rubber block print technique when she lost access to printing presses and equipment.

Molly Murphy-Adams discusses a rubber printing block she's using to make a print with University of Montana professors James Bailey, left, and Jason Clark on Thursday in the print-making studio in UM's Fine Arts Building. Murphy-Adams is at UM for a print-making residency for Native contemporary artists sponsored by the Missoula Art Museum and UM's MATRIX Press.

Murphy-Adams presses a rubber printing block onto geometric designs to add another layer of color to her print. Her designs and color palette are inspired by traditional Native beadwork.

Molly Murphy-Adams works on a print in the Fine Arts Building at UM on Thursday. The UM graduate, who now lives in Oklahoma, began using the rubber block print technique when she lost access to printing presses and equipment.

After Molly Murphy-Adams graduated from college in 2004, she lost access to the university's printmaking presses and equipment.

She had only recently discovered printmaking and loved the way its graphic qualities applied to the traditional beadwork, embroidery and quilting she learned from her mother. Murphy-Adams, an Oglala Lakota, grew up making her own powwow regalia for traditional and fancy dancing.

She began making prints with small rubber blocks on paper, a technique that didn't require a press or a wet lab – she could make them on her kitchen table.

Going back to her undergraduate years, she adapted the patterns and colors of those traditional forms in contemporary art. The block prints were no different.

"We're making complex designs by ​printing the same image multiple times on the same page, so they start to multiply and create a larger graphic pattern," she said. "It's a pretty humble technique, but with repetition you can create a complex piece."

This week, Murphy-Adams returned to her alma mater, the University of Montana, for a printmaking residency for Native contemporary artists through the Missoula Art Museum and UM's MATRIX Press.

She would produce a set of prints, talk and work with students, give a lecture and more.

On Thursday, she and Jason Clark, a printmaker and adjunct professor, were at work in the printmaking studio in the Fine Arts Building, using that rubber block technique.

They each were carefully aligning the block, small enough to fit in your palm, to apply another layer of patterning to her intricate designs. They would apply ink to a block, set it in place and then gently apply pressure. The atmosphere was calm, but Clark described the process as "nerve-racking" between applications.

The print he was working on had interlocking triangular and rectangular forms, requiring precise alignment.

"It's a geometric design that's used on a lot of different Crow pieces," she said. She adapted the pattern from a historical pair of moccasins, trimming the palette from six colors to three: pumpkin, pink and pale blue.

"Crow beadwork has its own color palette that is preferred, its own design style, its own shapes," she said. Lakota Plains beadwork, meanwhile, has apple greens, deep blues and reds. A tribe's palette might change over time depending on fashion and availability, she said.

Another print she was working on used a palette and design of her own creation. While these were relatively small, she's pushed it much further.

"I started making big prints and multiples and seeing how far I could take it," she said. "The largest I've ever done is a grid of 10 by 10." She said at some point she'll have to order specialty paper.

Last year, the contemporary art museum applied for and won a two-year, $100,000 grant from the Andy Warhol Foundation to fund the collaborative residency.

Ten years ago, the museum opened a gallery on its top floor that is dedicated exclusively to Native contemporary artists. The MAM saw the grant as a way to expand on its work with indigenous artists going into the second decade.

Murphy-Adams, who now lives and works in Oklahoma, is the second of four Native artists coming to Missoula through the MAM-Matrix collaboration.

Last semester, Sara Siestreem, a Hanis Coos abstract artist from Portland, kicked the program off. As part of the residency, the artists produce editioned prints that are divided up between the artist, MATRIX and MAM's Permanent Collection.

Both are young artists who had solo exhibitions at MAM earlier in their career, said MAM senior curator Brandon Reintjes. This was a way of revisiting them several years further in their development.

Next fall semester, John Hitchcock will visit, and in spring 2018, Duane Slick will visit.

MATRIX Press, the publishing arm of UM's printmaking program, was founded in 1998 by professor James Bailey.

Over the course of Murphy-Adams' visit, she'll have help from about six artists, including undergraduate and graduate students. Every BFA student takes an introductory printmaking course, he said, with about 18 per semester.

"It's a good chance for the students to learn new skills and learn professional print quality, and work with an artist all the way from conception to the finished piece," he said.

He said the visiting artists give students' insight into different artists' techniques. In Murphy-Adams' case, he said it's a good insight for them because of the way she turned a perceived limitation – not having access to a printmaking press – into an entire body of work.

During the residency, Murphy-Adams also produced a screen-print with a similarly graphic quality, and a drypoint copper-plate etching. In that piece, she accents the sharp monochrome lines with embroidery and beads, stitched through the cloth-like, 100 percent cotton paper.

Murphy-Adams, who was born in Great Falls and graduated from Hellgate High School, saw a large variety of beadwork growing up. The majority of her exhibited work since she graduated is based on it, and she still makes her own regalia and dances in powwows.

She said Oklahoma has a vibrant Native contemporary art community, with artists curating exhibits and mainstream museums incorporating Native art into their collections and exhibitions, rather than separating them.

The internet has changed the way that Native artists work, research and exchange information. She compared Native communities to an archipelago.

"They're all these little islands and pre-internet they were a little bit isolated in terms of how much can you share, how can you research and separated by distance," she said.

Now, she can access a museum's entire collection of art online: thousands of moccasin designs in an afternoon. The access has deeper significance for many artists.

"It's meant that a lot of Native artists are finally able to do research on their own material, because Native material and culture was bought, collected, stole, sold and is now in museums. Families don't always have their own antique pieces," she said.

Among artists, the community and competition has creative benefits.

"The quality and quantity and interest level is just through the roof," she said.

Molly Murphy-Adams' piece, "Forced North," is on display at the Missoula Art Museum through March 18. To see more of her work, go to mollymurphybeads.com.

Missoula Community Theatre: 'Over the River' comedy about family

Teresa Waldorf, who's well known in the local theater community for her comedy work, has stepped in to guest-direct plays at the Missoula Comm…