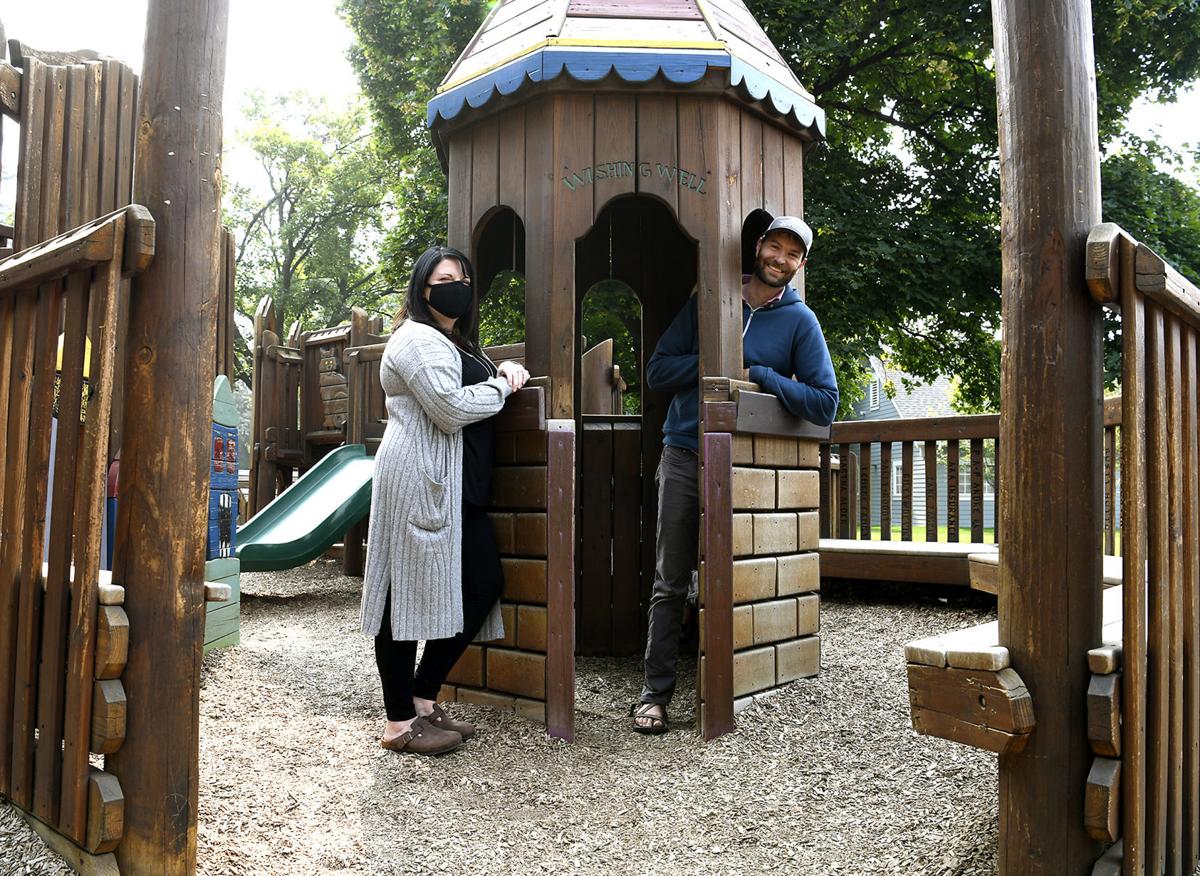 Lowell Elementary principal Barbara Frank and Nathan McLeod, parks and trails design and development coordinator for Missoula Parks and Recreation, stand in one of the features at the current Westside Park playground on Wednesday. The playground receives heavy use by both the school and the neighborhood, and construction of the first phase of a new playground is scheduled to begin before the end of the year. 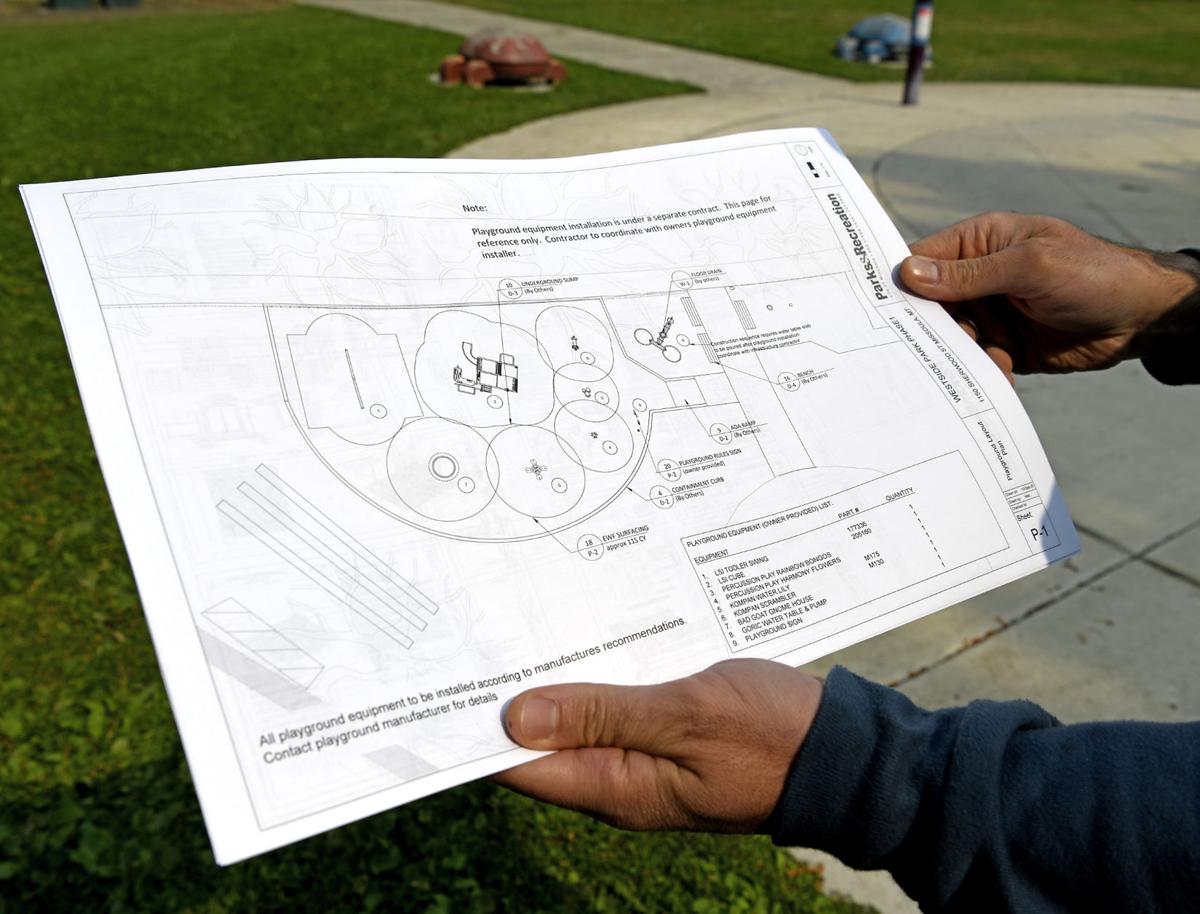 The first phase of Westside Park's new playground will incorporate some water features and an open design that keeps kids visible.

The Westside Park at Lowell Elementary School sees many children and families every day — shooting down a slide, kicking soccer balls and climbing through a play castle.

"I think it's probably one of the highest-used playgrounds in the entire city," said Nathan McLeod, with Missoula Parks and Recreation, on Wednesday.

But the playground, built in 1998 with a life expectancy of 20 years, needs an update. This month, Parks and Rec, nonprofit Trees for Missoula, and project partners released a mini documentary, "Project Westside Park" by Josh Nelson, to help raise money to build a new $2.16 million park for the neighborhood (see box for funding details).

In the film, parents, neighbors, educators and parks staff talk about the importance of play, not only for children but for society. "We thought that a documentary would be a good way to just talk about the project and get some excitement behind it as well as explain the reason why a playground in this Westside neighborhood is so important," McLeod said.

Karen Sippy, with Trees for Missoula, said the seven-minute film debuted last week at Centerfield Cinema before the showing of "Grease," and she believes it was well received. On the same day, she said Lowell Principal Barbara Frank unveiled it to staff at the school, who were moved to see community support for the project.

"There were quite a few tears that were welled up," Sippy said.

Lowell Elementary has had an enrollment of roughly 300 students, and in the documentary, Frank said collaboration has a significant effect on learning, and students need to play in order to collaborate and learn.

"So a playground is just as essential as books to an elementary school. And a safe playground is absolutely one of the most important things I can guarantee a family and student as a principal," Frank said.

She noted numerous studies show that after students come in from recess, their academic achievement increases. She also said play is critical to developing their motor skills, building their endurance, and helping to create healthy lifestyles.

Meg Whicher, with Parks and Rec, said children learn social skills, problem solving, crisis management, and how to get along in a park. "Play creates the building blocks to society at a young age.

"It all happens on a playground. And so these spaces that facilitate that type of socio and emotional learning within kids are vital to create the next generation of community members that know how to interact with each other and solve problems," Whicher said in the documentary.

Amber Shaffer, a parent, has personally witnessed growth in her son. In the documentary, she said her child is on the spectrum, and at Lowell, he learned social skills and how to interact with others. Shaffer said she saw her son exhibit on the playground skills a team of people had worked hard to teach him, which "hits you in the heart."

Lewis Yellowrobe, an educator with Missoula County Public Schools, said the park will help children become better students: "They'll have the opportunity to take a break from their studies and come have fun, rejuvenate and go back to their classroom with a clear mind."

Joanna Smetanka, a parent, simply expressed appreciation for the park for her family: "We love Lowell park, and I love the idea that there's going to be a new, beautiful, wonderful park for my family to play in and for all of our friends."

According to Parks and Rec, the City of Missoula is putting $350,00 toward the project, Missoula County Public Schools is putting in $100,000, and private money is coming from donors, grants and other sources (see box for details). The $2.16 million is the estimated cost for the full master parks plan, and it includes $1.5 million for the elementary and preschool playgrounds.

McLeod said the new playground will have five different play zones with different experiences for children. He said the first phase of the project is out to bid, and construction should begin before the end of the year. The timeline for future work will depend on the availability of funding; McLeod hopes the second phase can start in 2021.

Residents can learn more about the project and donate at projectwestsidepark.com.

Missoula Parks and Recreation counts a total of $723,700 contributions to date for the Westside Park, including from the following:

Residents can learn more about the project and donate at www.projectwestsidepark.com.

A Walk Through Time exhibit at University of Montana

A split Montana Supreme Court decision on Wednesday reversed the two negligent homicide convictions of a former Bitterroot pharmacist convicted in 2018, but upheld other convictions stemming from over-prescribing of opioids to his patients.

UPDATED: The University of Montana can accommodate quarantine needs to date and has doubled its testing since school started, according to a spokesperson.

University of Montana sees 4.5% decrease in enrollment, retention up

The University of Montana reported a 4.5% decrease in student enrollment Wednesday, attributing the drop to a global pandemic. But UM said retention and graduate school enrollment are up.

Lowell Elementary principal Barbara Frank and Nathan McLeod, parks and trails design and development coordinator for Missoula Parks and Recreation, stand in one of the features at the current Westside Park playground on Wednesday. The playground receives heavy use by both the school and the neighborhood, and construction of the first phase of a new playground is scheduled to begin before the end of the year.

The first phase of Westside Park's new playground will incorporate some water features and an open design that keeps kids visible.