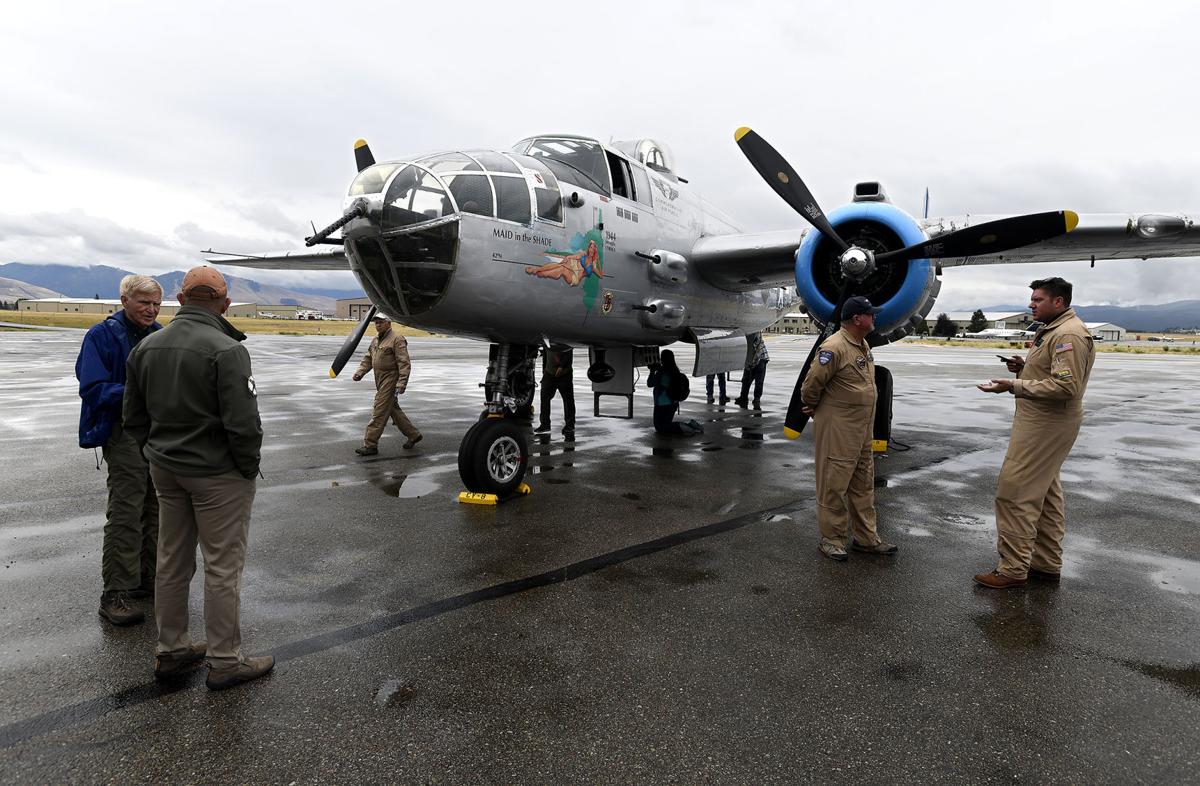 "Maid in the Shade," a restored B-25 World War II bomber, sits on the ramp at the Missoula International Airport on Monday. The B-25 will be at the Museum of Mountain Flying through Sept. 7. 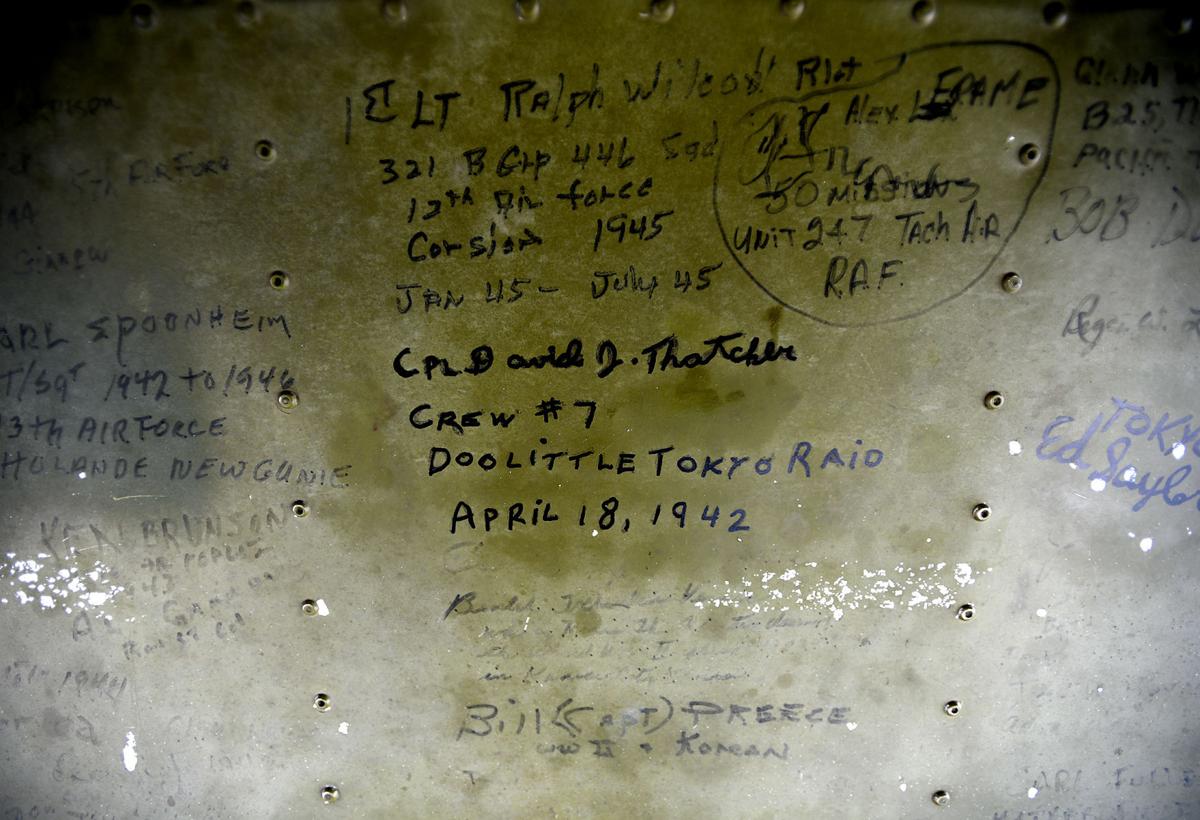 The  bomb bay doors on the B-25 have been signed by numerous veterans, including David Thatcher, one of the Doolittle Raiders who lived and raised his family in Missoula before his death in 2016. Thatcher signed at the 70th reunion of the Raiders in Dayton, Ohio, in 2012.

The old pilot came to see the restored B-25J bomber like the ones he used to fly.

This was a few years ago, the last time the Commemorative Air Force’s “Maid in the Shade” found her way to Missoula and the Museum of Mountain Flying.

Crew chief Bob Gates related his interpretation of the visit with his grandson shortly after she touched down again Monday morning for an eight-day stay.

“He was looking at the aircraft and just mentioned casually that he flew a B-25 in Korea. I asked him, why don’t you come and sign our door?” Gates said.

It took some convincing. The bomb bay door of the venerable plane that in late 1944 strafed and bombed bridges and railroads on 13 missions over Italy and two more in Yugoslavia teems with signatures of World War II pilots and crew.

“He gets up into the bomb bay, he raises his hand with a pen and his hand starts shaking. It’s got nothing to do with Alzheimer’s or Parkinson’s or anything like that,” Gates recalled. “He’s surrounded by names of these guys who are dead and gone. I’m sure the memories are flooding back to him of his time in the war.

Only after more encouragement did the pilot agree to sign his name only. His grandson filled out the rest of the details, and the signature remains among those of his predecessors.

Gates doesn’t know any more about the man’s story, or if he’ll be around to visit “Maid in the Shade” again this week.

“But he was very moved,” he said. “People had heard that he had signed the doors and were thanking him for his service on his way out, with tears in his eyes.”

It’s what she flies for.

The bomber is among 34 airworthy B-25s left, but one of just two with World War II histories.

Pilot Trevor Henson and co-pilot Brice LeClarre guided “Maid in the Shade” into western Montana from the east on a rainy morning. They took some time on their trip from Bozeman, where they spent the past two weeks, to fly low by request over Anaconda, to the presumed delight of a 95-year-old B-25 veteran living there.

The aircraft roared over the Missoula airport at 11 a.m. before landing from the west and taxiing up to the museum door. The crew of Gates, his wife, Lana Gates, Henson and LeClarre and flight load masters Gene Adkins and Greg Rothe stood at attention as four men with a color guard from VFW Post 208 fired three volleys from M14 rifles. A couple dozen others, including museum co-founder Dick Komberec, were there to pay tribute.

Each summer the Commemorative Air Force of Mesa, Arizona, sends its prize B-25, its B-17 “Sentimental Journey” and, most years, its C-47/DC-3 “Old Number 30,” to cooler climes for public ground tours and short flights. “Maid in the Shade” will be at the Museum of Mountain Flying east of the passenger terminal at Missoula International Airport through Labor Day.

Reservations for flights of 20 to 25 minutes aboard the seven-passenger plane starting Friday morning can be booked online at www.azcaf.org/tour or by calling 480-462-2992. Cost is $325 for a waist gunner seat in back and $590 for a jump seat just behind the flight deck.

Seventy-five years have passed since some 10,000 North American-made B-25s helped win the war with their versatility. Sixteen of them launched from a carrier far out in the Pacific and gave Tokyo a wake-up call with a bombing raid a few months after Pearl Harbor was attacked. The Doolittle Raid sent a resounding message to the enemy that the U.S. and its allies would not roll over.

Three of the last four Doolittle Raiders, including Missoula’s David Thatcher, signed these same bomb bay doors of “Maid in the Shade” after she was resurrected in 2009.

Dale Stovall of Missoula was on hand Monday and he’ll speak at a museum program at 4 p.m. Saturday. A decorated Vietnam War veteran and retired Air Force brigadier general, Stovall was born in February 1944, the same month “Maid in the Shade” came off an assembly line in Kansas City.

These days, roughly two flying accidents occur for every 100,000 hours of flying.

Watch this: Bellusci relives smokejumping days of the '40s

Two old veterans of the skies, a vintage airplane and a 93-year-old smokejumper, were reintroduced Friday at the Museum of Mountain Flying.

"We gotta stop fighting amongst ourselves."

"Maid in the Shade," a restored B-25 World War II bomber, sits on the ramp at the Missoula International Airport on Monday. The B-25 will be at the Museum of Mountain Flying through Sept. 7.

The  bomb bay doors on the B-25 have been signed by numerous veterans, including David Thatcher, one of the Doolittle Raiders who lived and raised his family in Missoula before his death in 2016. Thatcher signed at the 70th reunion of the Raiders in Dayton, Ohio, in 2012.