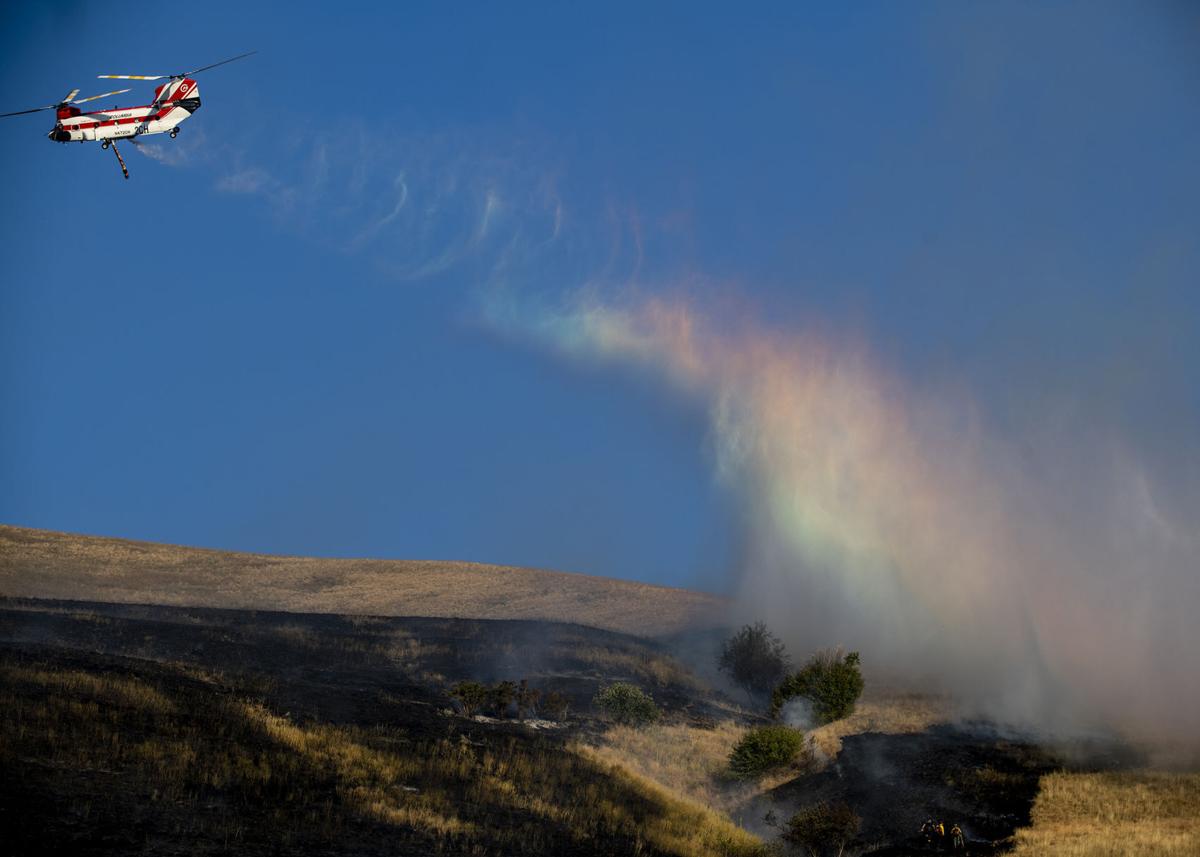 A Vertol heavy lift helicopter drops water on a fire on Mount Sentinel on Thursday night. As of 9 p.m. the fire was 75 percent contained. 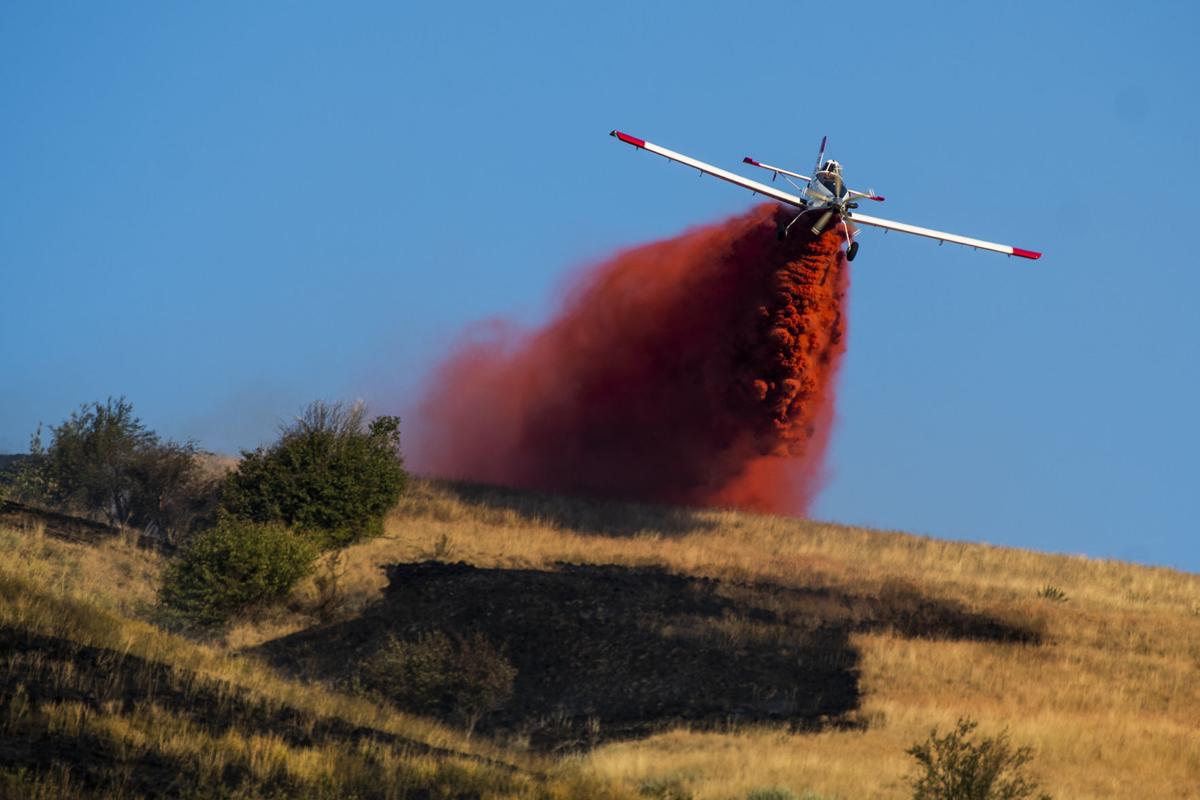 An Air Tractor drops fire retardant on a ridge above the fire on Mount Sentinel. 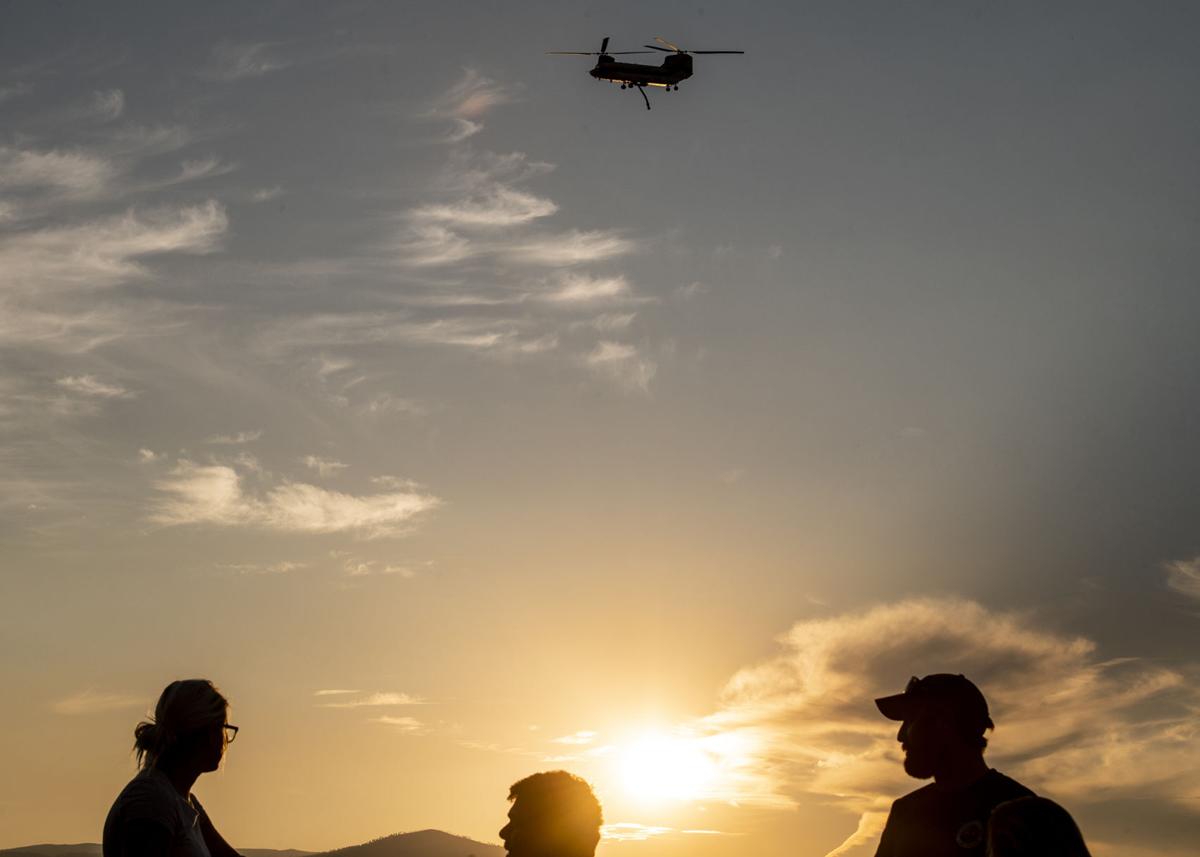 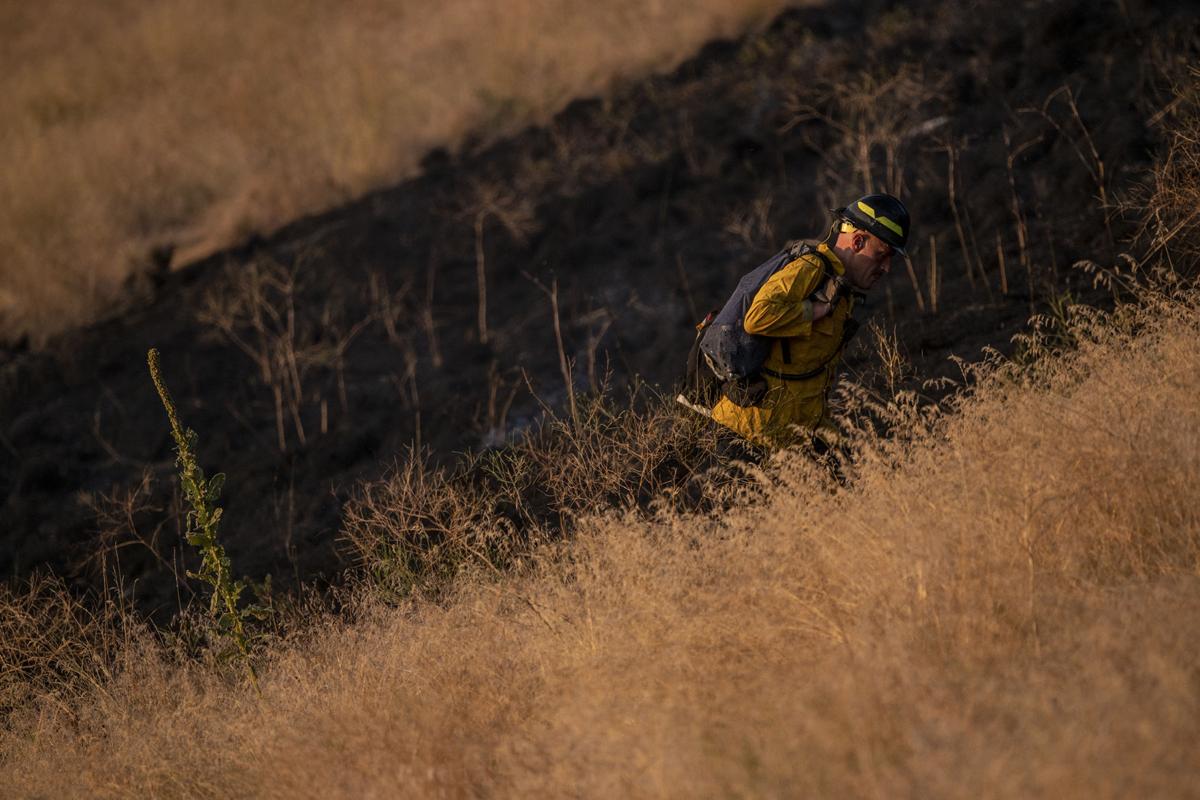 A firefighter walks up Mount Sentinel amid smoldering brush. 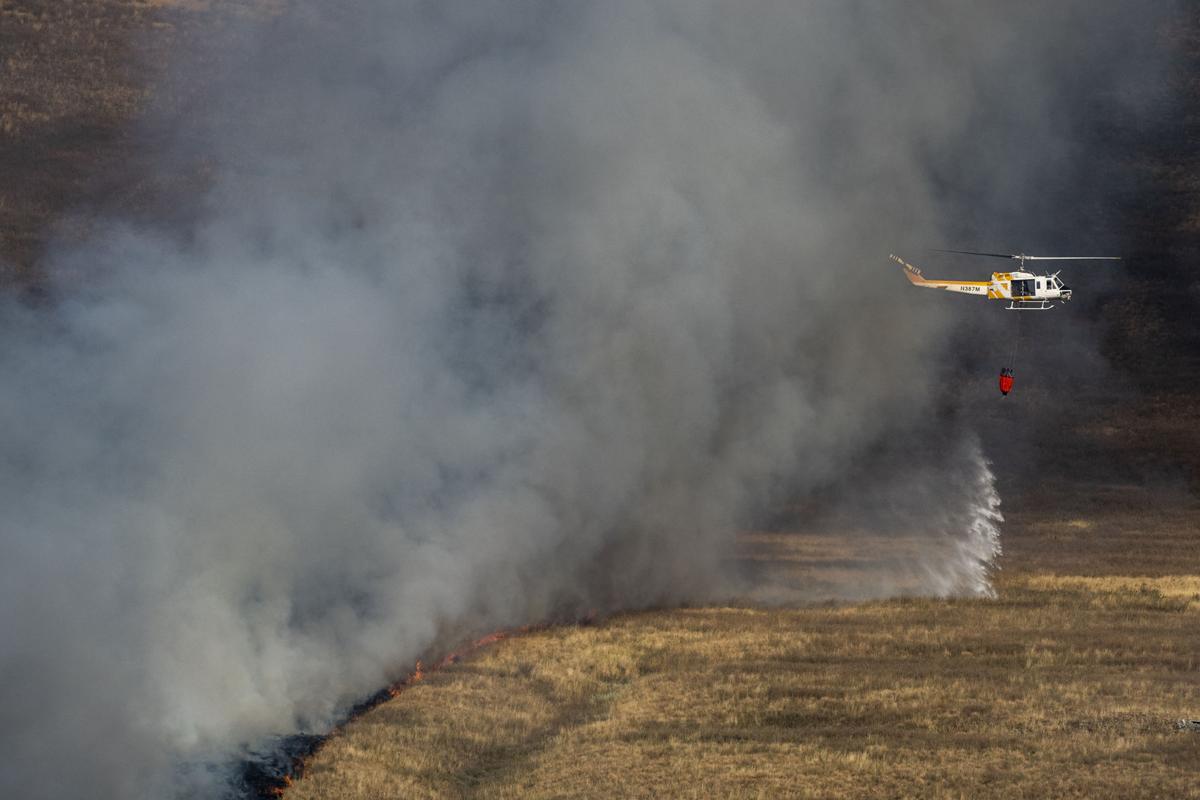 A huey helicopter drops fire on the south side of the fire. 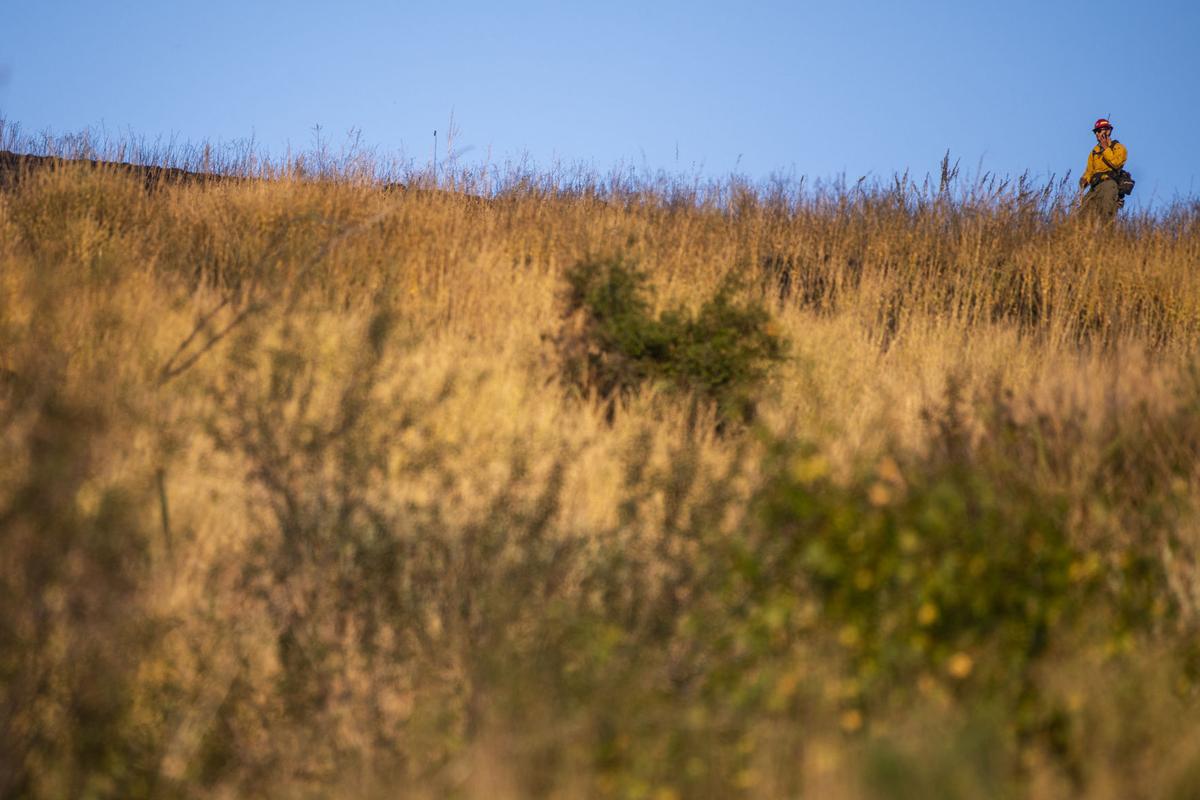 A firefighter uses his radio while watching the fire from above. 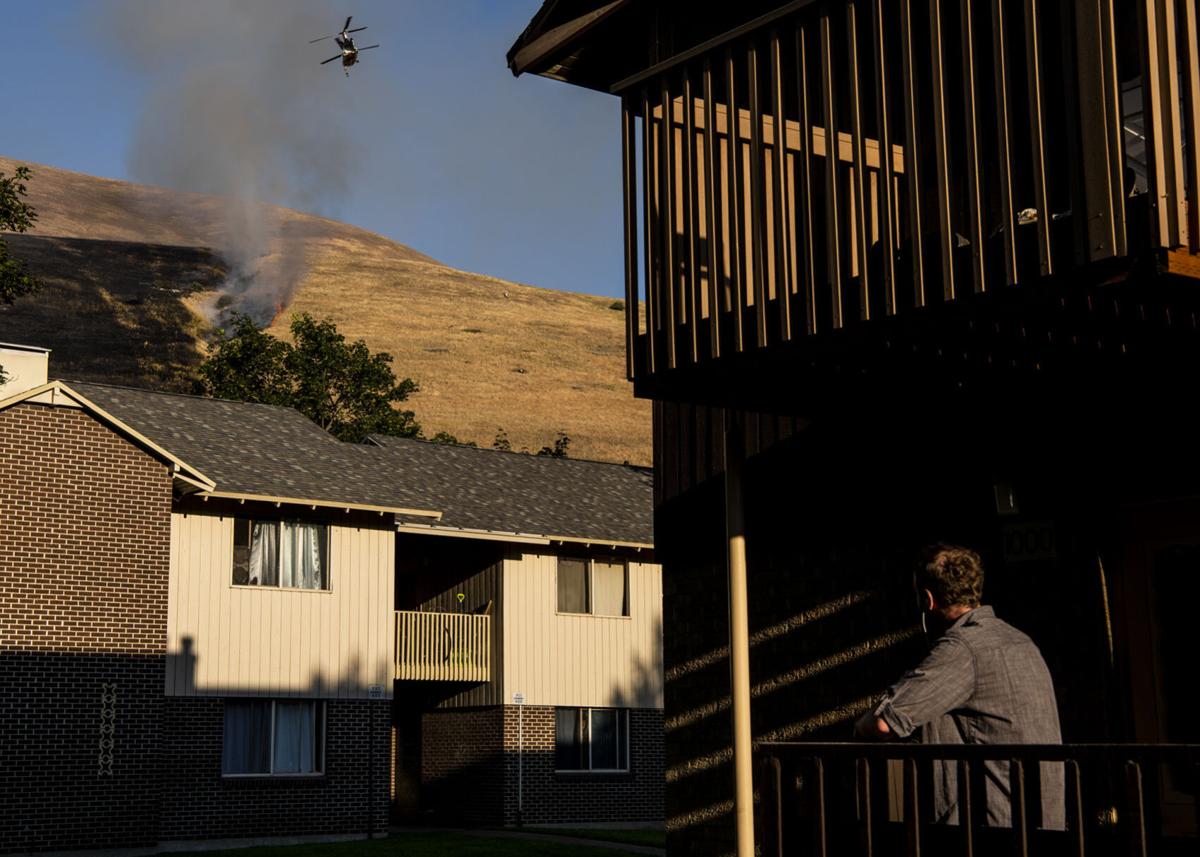 A Vertol prepares to drop water on the fire. 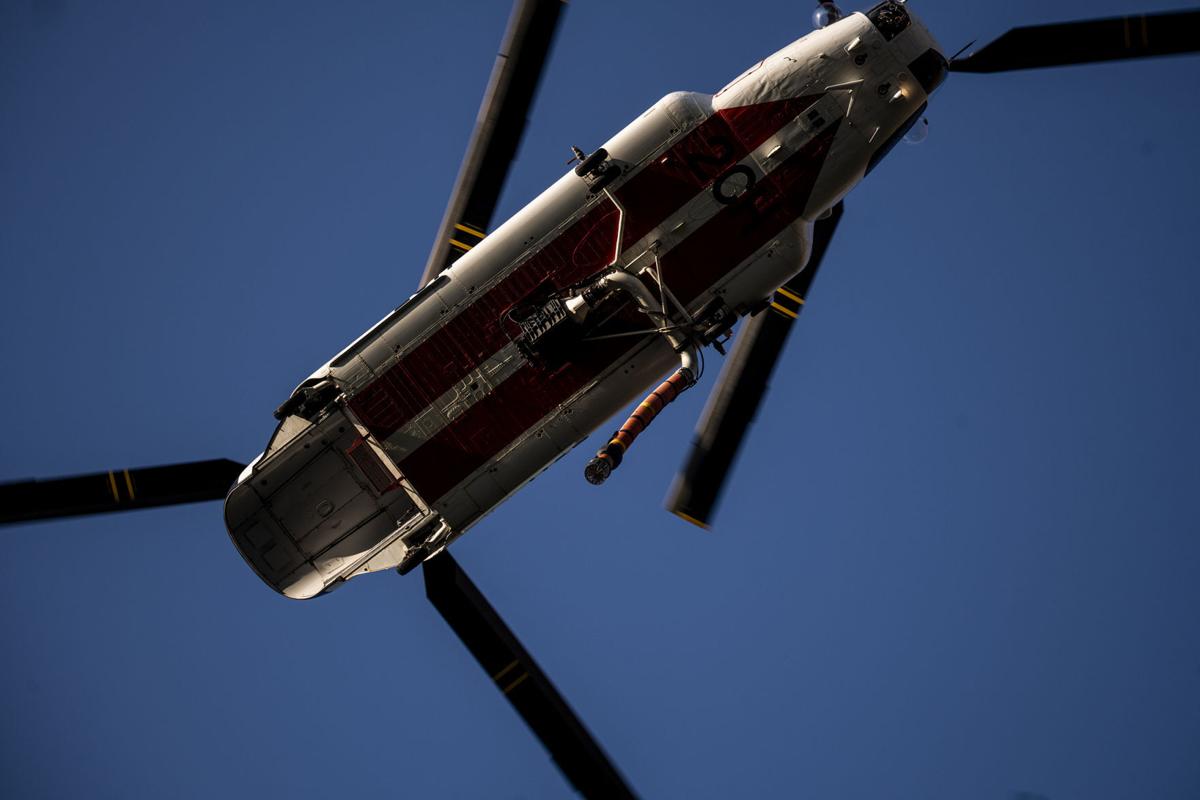 A Vertol leaves the fire to retrieve more water. 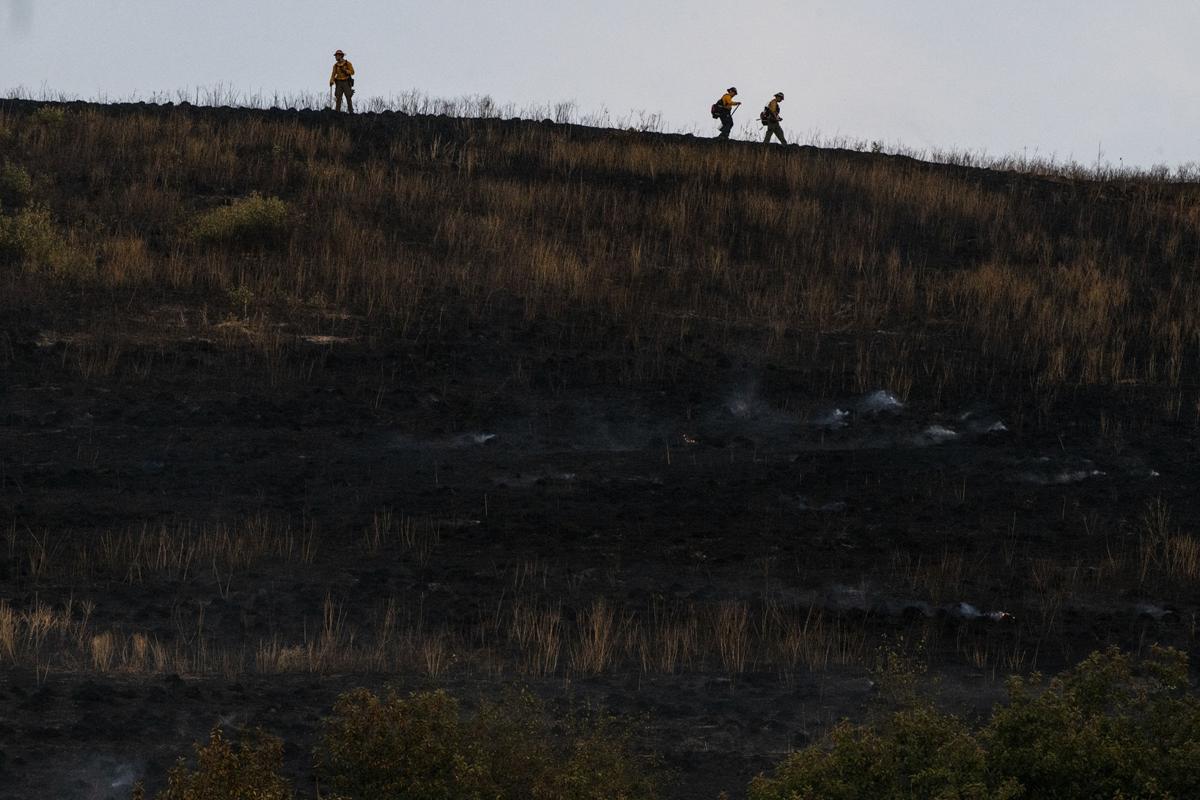 Firefighters walk across the ridge above the smoldering fire. 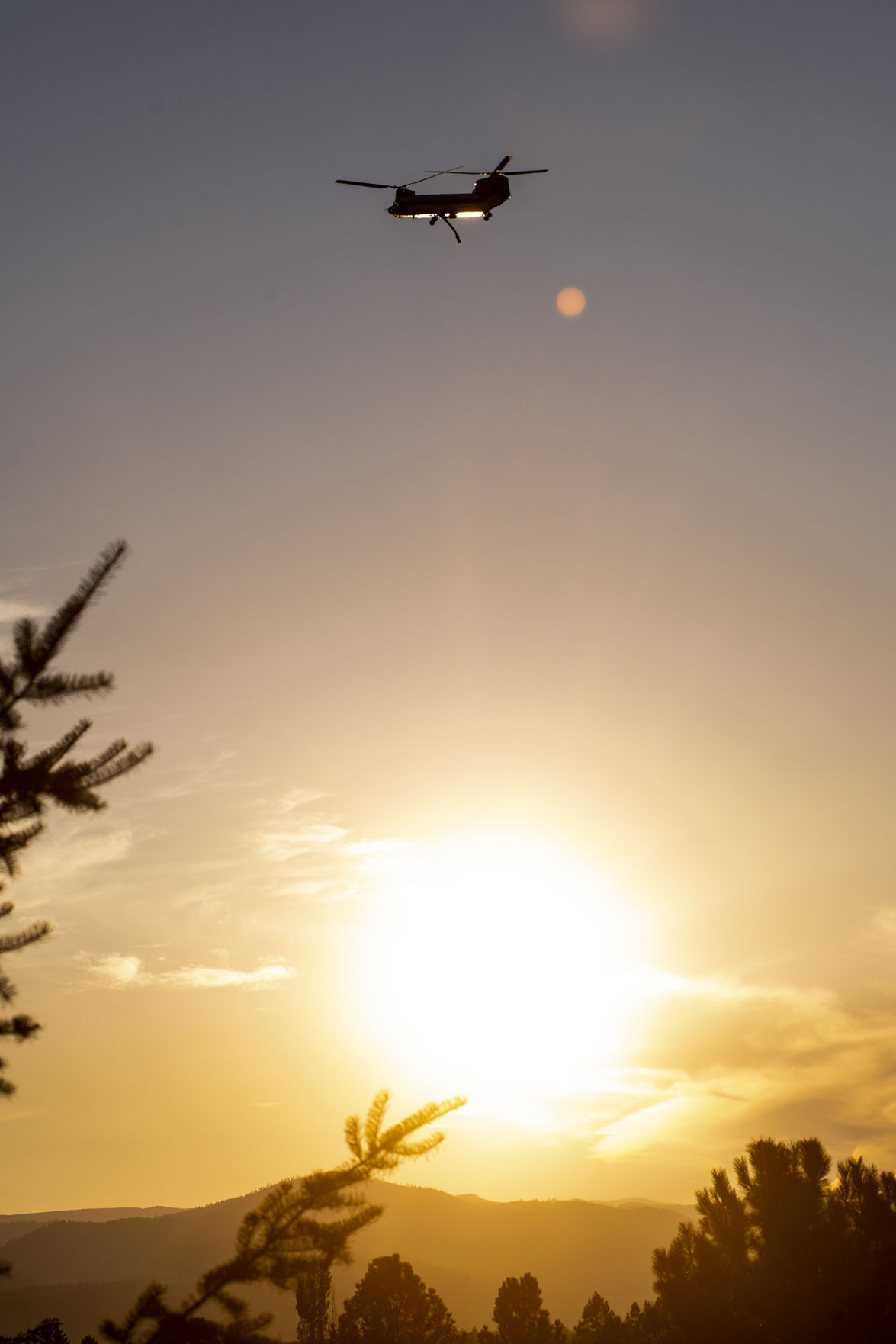 A Vertol circles around the fire before dropping water. 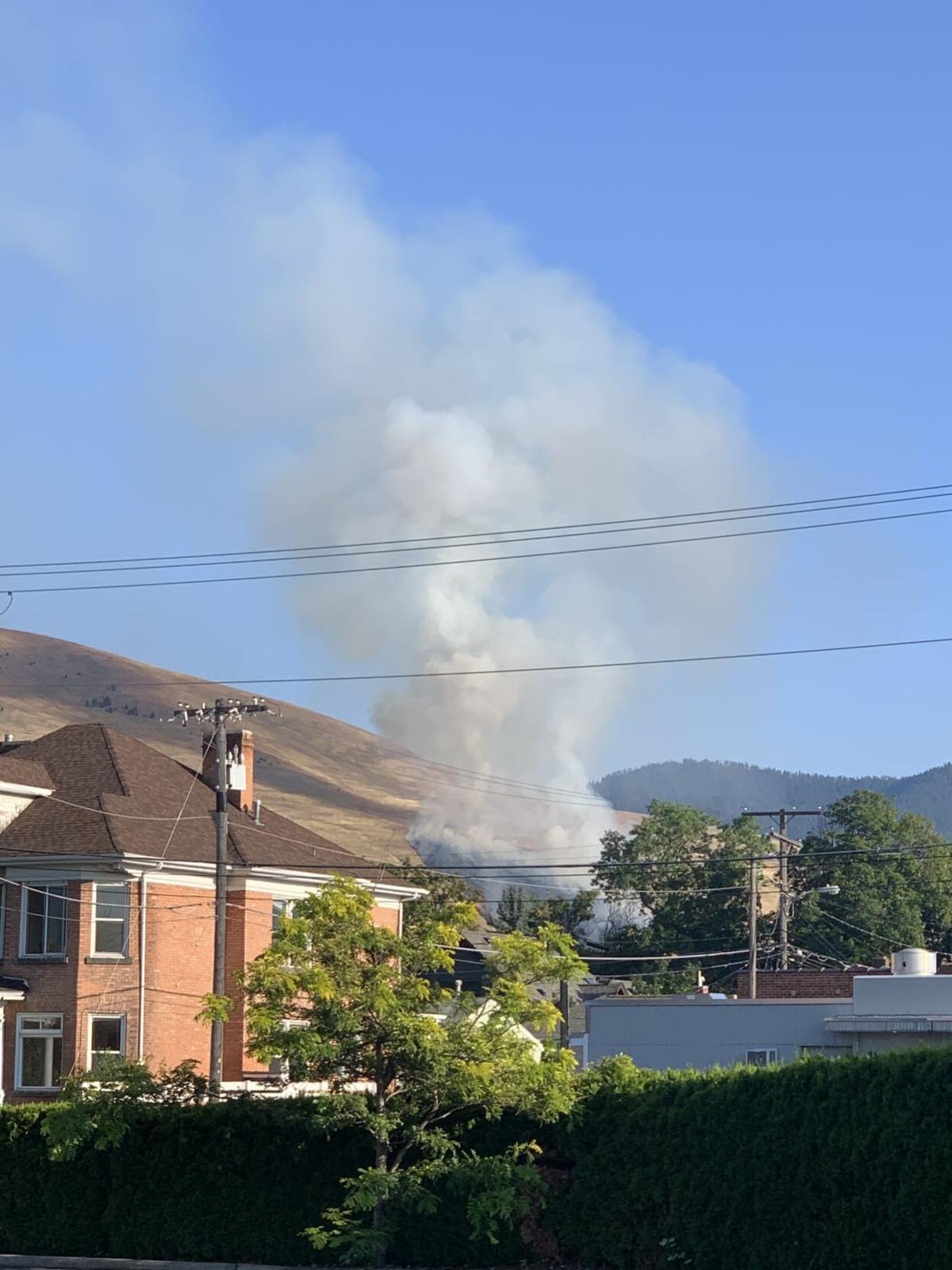 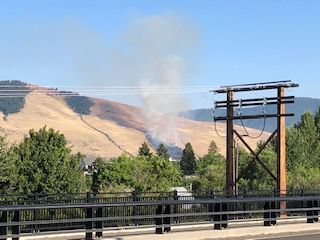 The fire on Mount Sentinel was roughly 75 percent contained around 9 p.m. Thursday, according to an update from the University of Montana citing the Montana Department of Natural Resources and Conservation.

Earlier in the evening, firefighters were monitoring roughly 10 different hot spots that broke out after a blaze started around 6 p.m. and firefighters flanked the sides of the main burn to try to catch up with the slope.

“We have good air support coming in, we’re just trying to catch it,” Missoula Fire Chief Jeff Brandt said Thursday evening. “The slope is pretty huge in terms of firefighter fatigue, but we’re very lucky that we don’t have a lot of winds.”

University of Montana Police Department Sgt. Kurt Feilzer said no residences were evacuated as a result of the fire, but officials did request through an alert that hikers on the M trail evacuate the mountain. The mountain is popular with hikers, but Brandt said he did not believe anyone was trapped. However, the DNRC was asking people to remain off the mountain, and the M trail remained closed.

At an A-frame house up the fire road beyond Maurice Avenue, former wildland firefighter Zach Bashoor and a small group of friends were drinking on their porch watching the crews haul hoses around the mountain side. Planes dropped fire retardant just above them, leaving red droplets on the table next to a bottle of vodka.

Bashoor saw the initial heat off the bottom of the mountain, climbed on the roof and then watched the fire roll up the hill.

“Those guys were moving,” he said of the fire crews swiftly climbing Sentinel to catch the blaze.

Shortly after the fire started, firefighters were spraying the perimeter of the burn with a hose. The fire appeared to have blackened the base of the mountain but looked to have charred mostly grass and brush, not reaching the top of some trees in its path. It wasn't clear Thursday how many acres the fire had burned or what had ignited the blaze. Early on Thursday evening, flames could still be seen near the top of the burn, and billowing smoke was visible from downtown. Vehicles were going up the fire road, and firefighters were bringing hose down.

The U.S. Forest Service, Montana Department of Natural Resources and Conservation, Missoula Police Department, UM Police Department, and Missoula Fire Department all were on scene. Chief Brandt said the crew had good air support with helicopters dumping water on the burn and some small airplanes on the way early in the night.

Near Maurice Avenue and the Elliott Village apartments, police were blocking the road early on as onlookers observed the fire from Arthur Avenue. On Mount and Southwest Higgins avenues, bystanders stood on the sidewalks, some in the back of parked pickups, snapping photos as the helicopters made drops.

Near the scene, Waldemar Ortiz, a master’s student studying wildlife biology at UM who lives at the Elliott Village Apartments, said the fire started around 6:14 p.m. He said he saw two kids run down the mountain right after a bush caught fire.

He and two other residents grabbed buckets of water to prevent the fire from spreading to nearby residences from the base of the mountain while another neighbor called the fire department.

“Our guess is just that it’s teenagers doing something they weren’t supposed to be doing,” Ortiz said.

Firefighters accessed the burn via the Fire Road, which was marked by a sign citing high fire danger conditions. Ortiz, who has taken classes on wildfires and fire containment, said he watched aircraft drop water and flame retardant on the burn while eating a cold Chipotle burrito he had set aside to help douse the flames.

“Since there was no wind blowing it anywhere, no directionality of the fire, just the slope would help the fire creep up rather than coming down,” Ortiz said.

Donovan Bell, another resident at the Elliott Village, had just returned from getting a burrito at El Diablo and said the fire had started and spread all the way up to a tree line in the 15 minutes he was gone.

UM photojournalism professor Jeremy Lurgio had just ended a bike ride on the MoZ, a trail that drops down to Maurice, when he heard someone in the student housing apartments yell: “Fire!”

At that point, “It was big enough that I wasn’t going to run up there and try digging a fire line,” he said.

Lurgio watched as the blaze rolled up the hill, died down and then fired up again in spurts. By then, fire crews and emergency personnel were already on the way.

A neighborhood resident said his son noticed the fire around 6:30 p.m.

Mount Sentinel has seen several fires over the years, most of them small. But in July 2008, a fast-moving grass fire scorched 450 acres on the mountain’s western slope.

Authorities said that fire was started by two boys, ages 7 and 8, playing with a cigarette lighter behind the University of Montana’s married student housing complex. ​

This story was updated to reflect the correct name of the MoZ Trail.

The trustees also voted to delay a vote on a six-month lease of Mount Jumbo School to the Missoula International School until their first board meeting in October.

Investigators seeking cause of Sentinel fire

Fire crews worked Mount Sentinel on Friday morning securing the edges of a burn that erupted the night before and scorched 24.9 acres, according to Missoula Fire Department Chief Jeff Brandt.

Charging documents filed Friday against a University of Montana men's basketball player allege Naseem Gaskin choked a woman after an argument over him texting with another person.

Missoula schools set to reopen this week, though some families will stay home

Missoula County Public Schools and other smaller schools in the area are preparing to reopen, though some families are choosing online options or even homeschooling.

A Vertol heavy lift helicopter drops water on a fire on Mount Sentinel on Thursday night. As of 9 p.m. the fire was 75 percent contained.

An Air Tractor drops fire retardant on a ridge above the fire on Mount Sentinel.

A firefighter walks up Mount Sentinel amid smoldering brush.

A huey helicopter drops fire on the south side of the fire.

A firefighter uses his radio while watching the fire from above.

A Vertol prepares to drop water on the fire.

A Vertol leaves the fire to retrieve more water.

Firefighters walk across the ridge above the smoldering fire.

A Vertol circles around the fire before dropping water.