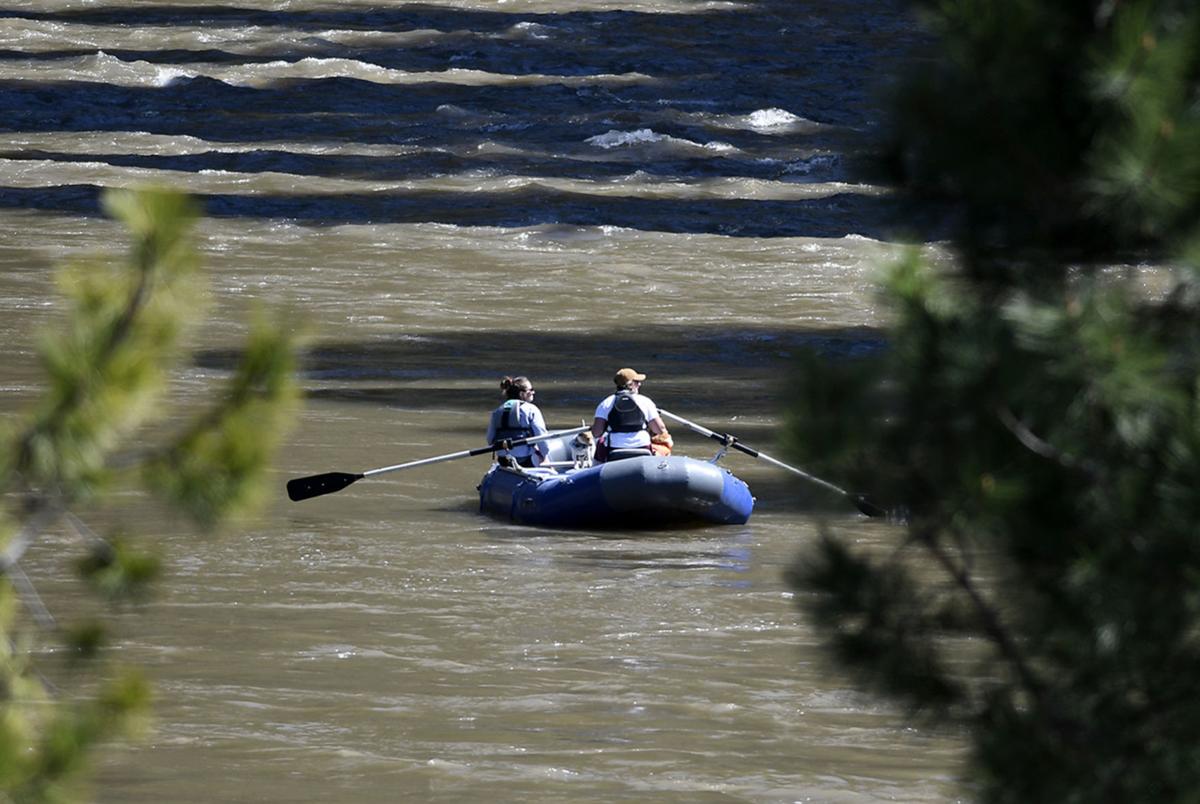 Rafters float the Blackfoot River on Tuesday. Rafting, fishing and other activities bring millions of nonresidents and billions of dollars to Montana, but the COVID-19 pandemic has forced state officials to discourage visitors in the short term. 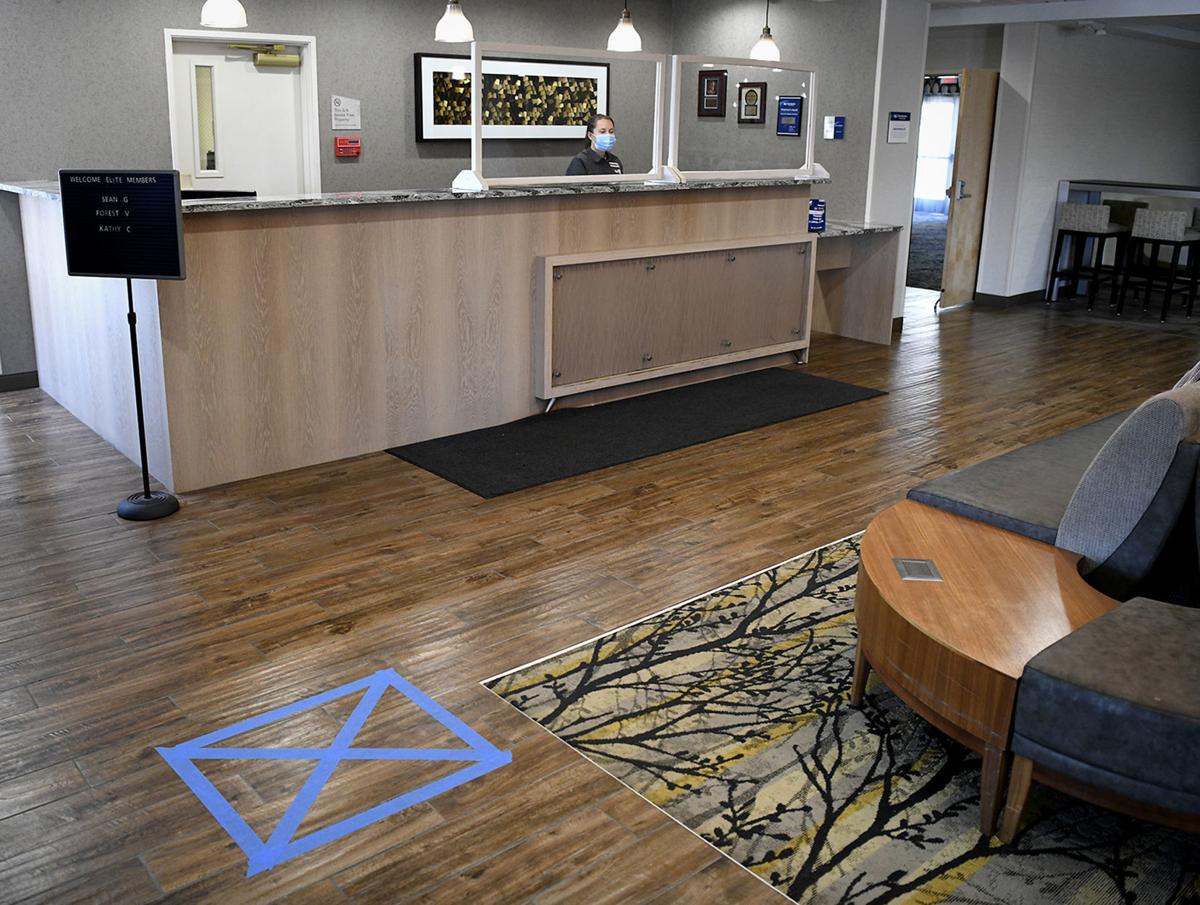 Sierra Kirk works at the front desk of the Best Western Plus Grant Creek Inn in Missoula on Tuesday. The hotel's occupancy is about 10% to 20%, when in a typical year it would be 80% and increasing as summer nears.

Tourism is one of the most important industries for Montana's economy, but the coronavirus pandemic has forced state officials into the previously unthinkable position of encouraging visitors to stay away in the short term. Meanwhile, hotels in Missoula and statewide are seeing what one Missoula manager calls an "awful" loss of business.

To strike a balance, the Montana Office of Tourism wants people in other places to keep the Treasure State in mind for future vacations. So on Monday, Visit Montana, the state's website for marketing to out-of-state travelers, released a video with a message that "Montana is worth the wait."

“Now is not the time to welcome visitors back to Montana, but when the time is right we want visitors to keep us in mind,” said Montana Department of Commerce Director Tara Rice in a statement accompanying the video. “There’s no better way to inspire future visitors than by showing off all Montana has to offer.”

The 1-minute video features some of the majestic scenery that drew 12.6 million nonresidents to visit here in 2019. Those tourists spent about $3.6 billion combined here, according to the Institute for Tourism and Recreation Research at the University of Montana. That spending supports roughly 60,000 jobs here and is a major driver of the economy, especially in western Montana.

But the industry has been demolished by the pandemic, and a mandatory 14-day quarantine for all out-of-state travelers visiting Montana remains in place under Gov. Steve Bullock's emergency declaration.

Whitney Bergmann serves on the board of directors for the Montana Lodging and Hospitality Association, and she also manages the 126-room Best Western Plus Grant Creek Inn in Missoula. She's also the president of the Missoula Tourism Business Improvement District Board.

"Our first priority is the safety of our community, employees and guests," she said. "We are in full support of the idea that travel needs to happen in a thoughtful, coordinated way with the governor's phased reopening. The hospitality industry is about welcoming people and treating them like family. We’re focusing on that mission every day, and we will be ready as the governor moves us into phases where out of state travel is encouraged."

She said hotels and lodging businesses around the state are seeing huge impacts. In Missoula this time of year, lodging would normally be between 75% and 80% occupancy, but they're averaging about 18% right now.

"It's pretty brutal," Bergmann said. "It's been challenging."

Some hotels are as low as 5%, she said, and her own hotel is way below normal.

"From a financial standpoint, it’s awful," she said. "We are running 10-20% occupancy when typical for this time of year is 80% and upwards to 100% through the summer.

She's hoping travel within the state will be encouraged under the next phase of Bullock's phased reopening plan and Missoula County's stricter guidelines.

"The hotels in Missoula and Montana were been deemed essential and so we’ve been open this whole time," Bergmann noted. "We have been taking care of people like traveling health care workers, truck drivers, and folks traveling for essential medical procedures every day. This also means we aren’t just now figuring out how to do so safely, we’ve been doing it the whole time, things like three-day vacancies between guests, constant and consistent cleaning and sanitation protocols, and careful social distancing and reduced or no-touch check-in and out processes and more."

That means they feel well-practiced in the methods needed to keep the community safe.

Karen Baker, the chair of the Montana Lodging and Hospitality Association and general manager of Grouse Mountain Lodge in Whitefish, said the state's video is a good idea.

“The (Association) has reviewed the new ad issued by the Department of Commerce and appreciates the effort to inspire future visitors by showing off all Montana has to offer when travelers are ready to visit," she said. "We believe Montana will be one of the safest places to visit in the nation and our members look forward to the next stages of Montana’s reopening process. This video is a good reminder to us all about the natural beauty that makes our state the best place to visit, play and work.”

Brad Griffin, the board president of both the Montana Restaurant Association and the Montana Retail Association in Billings, said the video does a good job of "whetting people's appetite" for travel in the future.

"I hope this is the first of two or three phases of an advertising campaign to get tourists to come to Montana (eventually)," he said. "When we're open, we need another campaign that says 'the cakes are on the griddle' or that Montana is a great place to social distance. There's folks that are more clever than me that will come up with something I'm sure."

Taylor Scott, now in his fourth year of owning the Missoulian Angler fly shop and fishing guide service, said he's already had to cancel between 40 and 50 boats this spring. The state's imposed restrictions have had taken a big toll on the guided fishing trip industry, which is huge for western Montana outfitters, guides, restaurants and lodging businesses.

"I have a mixed opinion. I'm on on both sides of it," he said. "It’s hard to tell the guides they may not have work with this 14-day quarantine on nonresidents coming. It’s something that obviously needs to be done, and they’ve done a great job of limiting the coronavirus in Montana, but at the same point if June comes around, tourism makes Montana run so it’s hard to see that continuing throughout the summer."

Scott said he employs about 30 guides every summer, and 10 of those are full-time. He said his clients stay at local hotels in Missoula, which right now have nearly empty parking lots. With good weather conditions this spring, he says the state is missing out on what would have been big business. Mid-June through October is when people in the industry make their "bread and butter," he noted.

"I hope something changes, you know, and we can get our guides out fishing and working this summer," he said. "It doesn’t look pretty at this point. I don’t know what to think at this point. Every week I have different feelings, different emotions. We'll just keep playing it by ear and take this thing in stride, I guess."

"Our clients are going to drive to other counties to get their hair done and already are," said Burton's Classic Hair Salon owner John Herring. "How will that help curb the spread?”

All three lost their sense of smell.

One local economist said the economy has "fallen off a cliff."

Paycheck Protection Act a headache for some Missoula businesses

Some business owners are finding that they can't compete with federal and state unemployment benefits right now and therefore are having a hard time getting workers re-hired.

Montana tourism businesses are seeing fewer long-term cancellations than other places in the U.S.

“If there’s any bright spot in this tragedy it’s people getting a new awareness of how important it is to be tapped into the local food system.”

“July and August are really our high-production months,” said Darwon Stoneman, co-owner and manager of Glacier Raft Company. “We’re still planning on having somewhat of a season."

Missoula County prosecutors last week filed charges against a man who attempted to tie up the local health department's phone lines in protest of a self-quarantine order.

More people without homes are choosing to sleep outdoors during the COVID-19 pandemic, and one city official said that has exacerbated trash concerns along the Reserve Street river corridor.

UPDATED: Taproom closes, but Kettlehouse will do brewing, R&D at Northside

"We have made the decision to permanently close our Northside taproom in response to the global pandemic we are currently experiencing," a social media post read.

Businesses in Missoula are slowly starting to re-open.

“Why is (the business reopening plan) industry-specific and not requirement-specific, I guess is our point,” said a Missoula fitness studio owner.

The Missoula Marathon pumped in $1.8 million to the local economy four years ago and the race director estimated it was closer to $2 million last year.

Surveys of potential American travelers show a large majority support mask-wearing policies as well as 14-day quarantines, according to a tourism expert in Missoula.

Rafters float the Blackfoot River on Tuesday. Rafting, fishing and other activities bring millions of nonresidents and billions of dollars to Montana, but the COVID-19 pandemic has forced state officials to discourage visitors in the short term.

Sierra Kirk works at the front desk of the Best Western Plus Grant Creek Inn in Missoula on Tuesday. The hotel's occupancy is about 10% to 20%, when in a typical year it would be 80% and increasing as summer nears.