'We can't let these things go': Tribes work to protect artifacts
Share this
× 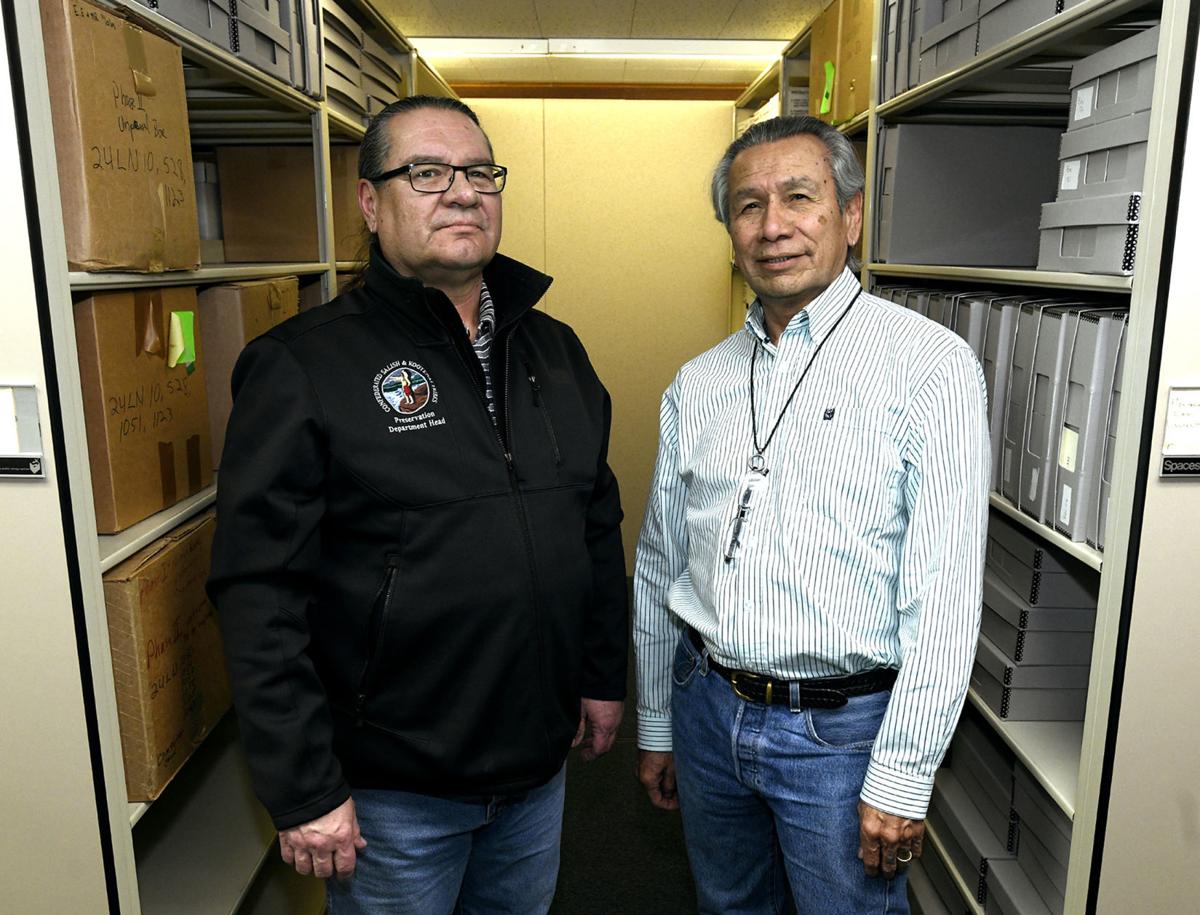 Mike Durglo, left, the Confederated Salish and Kootenai Tribes' historic preservation officer, and Vernon Finley, chair of the Kootenai Culture Committee, stand in the room that houses about 24,000 artifacts unearthed around Libby Dam in the 1970s and '80s in Pablo last week. The tribes would like the U.S Army Corps of Engineers to release ownership of the artifacts to them, but also need to create storage that meets standards for archaeological collections. 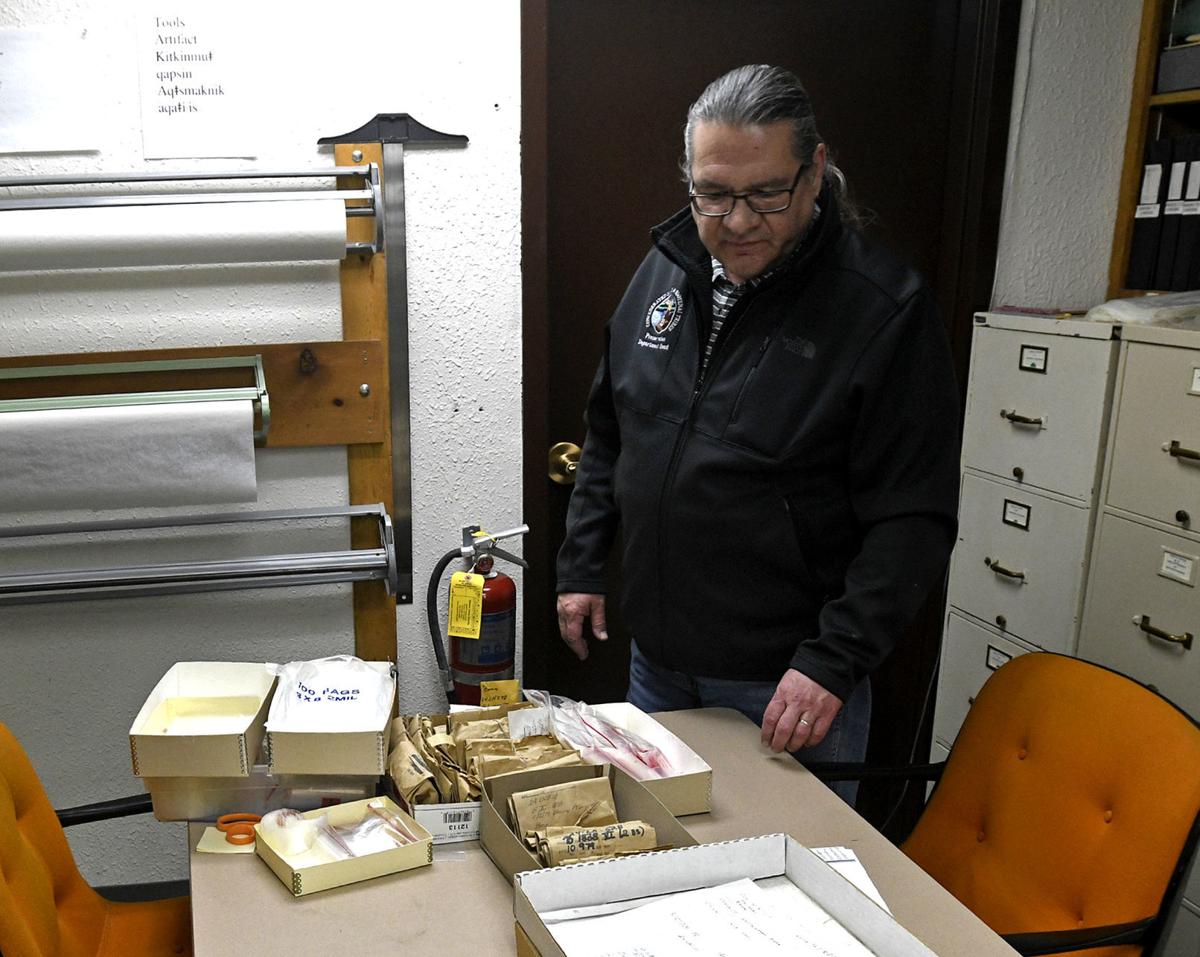 Durglo stands next to some of the materials used to catalog the artifacts. Tribal preservation office employees have spent years working on the collection.

PABLO — A basement here stores thousands of artifacts from Montana’s distant past. Their future weighs heavily on Mike Durglo.

“There’s a lot of respect that goes into taking care of these things,” said Durglo, head of the Confederated Salish and Kootenai Tribes’ Preservation Department.

He was standing in a room beneath Salish Kootenai College that holds about 24,000 artifacts. They were unearthed around Libby Dam in the 1970s and '80s.

But the Army Corps of Engineers is now working to centralize its archives, and the artifacts’ current home is flood-prone and rodent-infested. These developments have left the tribes working to find them a new home.

It’s the latest phase of a decades-long dispute over these artifacts, one that began in the 1960s when the Army Corps built Libby Dam in the Kootenai tribe’s ancestral territory. Since the 1990s, the Confederated Salish and Kootenai Tribes have stored the artifacts at Salish Kootenai College under an agreement with the Army Corps.

The Army Corps oversees several archives and archaeological collections across its Northwestern Division, which stretches from Missouri to Washington state. For the last few years, it’s been working to consolidate its collections to a few centers as part of a National Regionalization Effort.

Durglo first learned about the effort at a Portland meeting in 2017, and came away with the impression that the artifacts could be removed, possibly permanently. “I came back here, Vernon (Finley) was the chairman at the time, and I was like, ‘What the hell!? We can’t let these things go.'”

The tribes' Char-Koosta News later reported that the Army Corps was considering moving them to St. Louis. But in an email to the Missoulian Friday, Jennifer Riordan, director of the Army Corps of Engineers Mandatory Center of Expertise for Collection Management, Archives, and Curation, denied that such a move was ever part of the regionalization plan. She also wrote that “while the Corps assessed the collections and the curation facility at the Salish Kootenai College during the research for the National Regionalization Effort, the Corps is not relocating collections from tribal facilities as part of this effort.”

She also pointed out that the facilities holding federal archaeological collections must meet certain upkeep and staffing standards — and that the Corps wanted to help the tribes meet them. “The Corps is doing all that we can to facilitate the retention of the Corps collection at the tribal repository by providing technical assistance and sharing any additional information.”

Durglo is quick to admit the current storage isn’t adequate. “This whole area is in a floodplain,” he said on the staircase. A mousetrap lay in wait just outside the door.

The artifacts themselves are held in plastic bags, within plastic bins and cardboard boxes on rows of rolling shelves. “The majority of them would be archaeological-type materials associated with occupation sites,” said Finley, who now chairs the Kootenai Culture Committee, describing them as a “lithic scatter" — that is, stone tools and their remnants.

“This whole thing really concerns me,” Durglo said of the current storage. “Not so much that all the items, the lithics are going to be damaged by water. … It’s the documents I’m concerned about”  — the documents in which tribal preservation office employees Mary Adele Rogers, Kayla Johnson and others have spent years cataloging the artifacts and their backgrounds.

He has his eye on two possible homes for the files and relics. He said one, a former bank building with an underground vault, would cost about $350,000 to purchase and about another $10,000 to modify. The other, a shop building at the now-closed Kicking Horse Job Corps Center, wouldn’t have to be purchased but would likely cost more to clean and prepare.

Whichever one they choose, the tribes expect they'll have to pay for it. “They have not specifically set aside funding for a facility,” Finley said of the Army Corps. “We have some mitigation funds that we can possibly use, but we don't have a pot of money that we can just dip into, or else I would have.”

Even if the tribes and the Corps share the goal of upgrading the artifacts’ storage, the tribes take issue with their status as a “Corps collection.”

A 1990 law called the Native American Graves Protection and Repatriation Act, or NAGPRA, states that if federal agencies hold human remains, funerary objects or “objects of cultural patrimony” affiliated with a particular tribe, the agency must return them to the tribe upon request.

“There are no identified Native American human remains within the Corps collection at Salish Kootenai College,” Riordan wrote. “The Corps is coordinating to produce a catalog of the collection, and once cataloged, any NAGPRA items identified through consultation will be handled through the NAGPRA process.”

In Durglo’s view, the collection already falls under the law. “We identify those items as items of cultural patrimony, in that they are sacred items to all of us and they do fall under NAGPRA, so therefore, we're telling the Corps of Engineers, ‘You should give them back to us, you should repatriate them back to us. Give them to us and walk away, don't tell us what to do with them.’”

Finley concurred. “The agency shouldn't be the one to tell us, ‘Oh, those don't qualify, they're not the right kind of things. It should be the tribes all across the United States (who get) to say, ‘Oh, those are spiritually significant to us.’”

Disputes over the legal status of Native American items can crop up, said Monte Mills, an associate professor at the University of Montana’s Alexander Blewett III School of Law and co-director of its Margery Hunter Brown Indian Law Clinic.

“Even though agencies may be in a position to say, ‘We don’t think this applies,’ I think the spirit of NAGPRA says … you should consult with tribes and work with them to figure out whether they agree.’”

As the negotiations continue and the fate of the artifacts remains uncertain, Durglo is clear-eyed about their significance to the tribe’s past — and its present.

“When they made the tools, there's a lot of prayers, a lot of that person's actual soul goes into that,” he said.

“Those things are screaming. They don’t want to be in bags and boxes and things.”

This article has been updated with Mike Durglo's correct title as head of the tribes' Preservation Department.

KALISPELL — Bill Silva made the trip here from Libby Wednesday night, and the town’s namesake dam was on his mind.

MISSION DAM — Many people try to escape technology by seeking out nature. But for Germaine White, the two go hand-in-hand.

Mike Durglo, left, the Confederated Salish and Kootenai Tribes' historic preservation officer, and Vernon Finley, chair of the Kootenai Culture Committee, stand in the room that houses about 24,000 artifacts unearthed around Libby Dam in the 1970s and '80s in Pablo last week. The tribes would like the U.S Army Corps of Engineers to release ownership of the artifacts to them, but also need to create storage that meets standards for archaeological collections.

Durglo stands next to some of the materials used to catalog the artifacts. Tribal preservation office employees have spent years working on the collection.