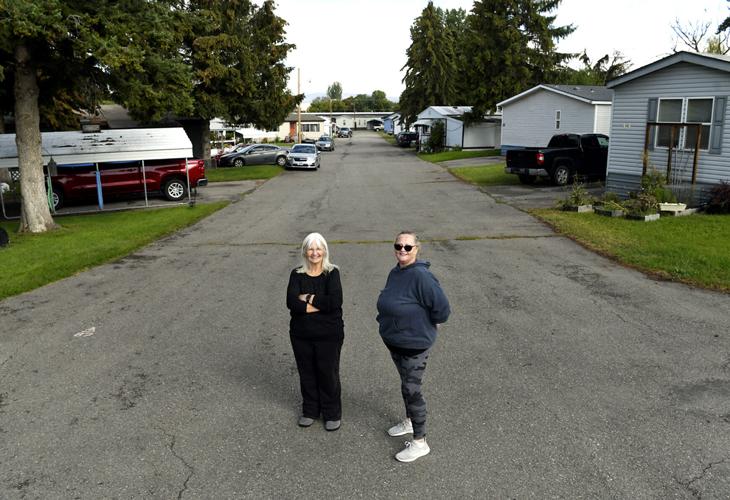 Linda Hartless, left, and Barb Kasauskas stand in Old Hellgate Village trailer court, where the residents have banded together to buy the land under their homes. With help from NeighborWorks Montana, the homeowners pooled their money to take out a loan and form a Resident-Owned Community. 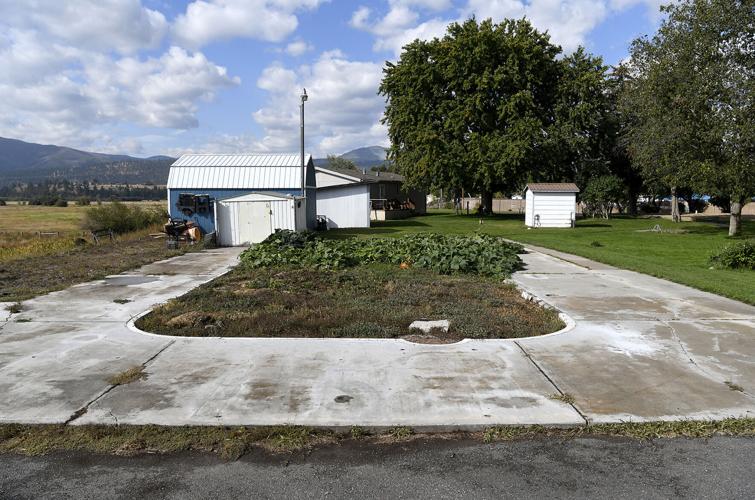 Some residents of the trailer park have used a long-abandoned pool to plant a garden at Old Hellgate Village. 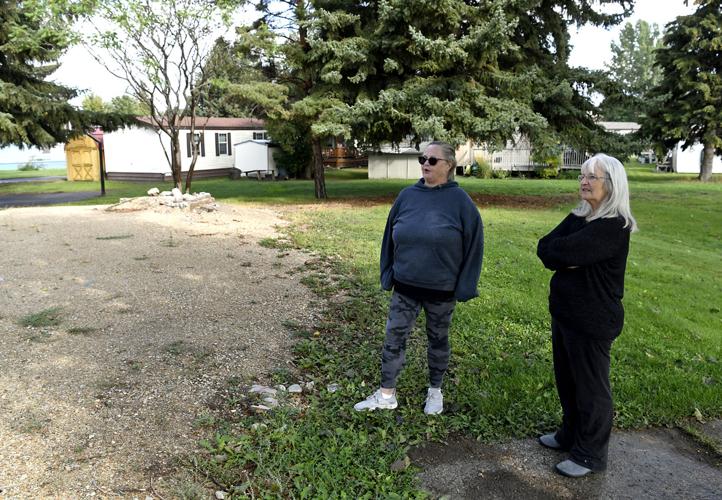 Kasauskas, left, and Hartless said owning the trailer park as a community will let them make decisions on repairs and maintenance and even possibly turning a large open space into a park for the residents. 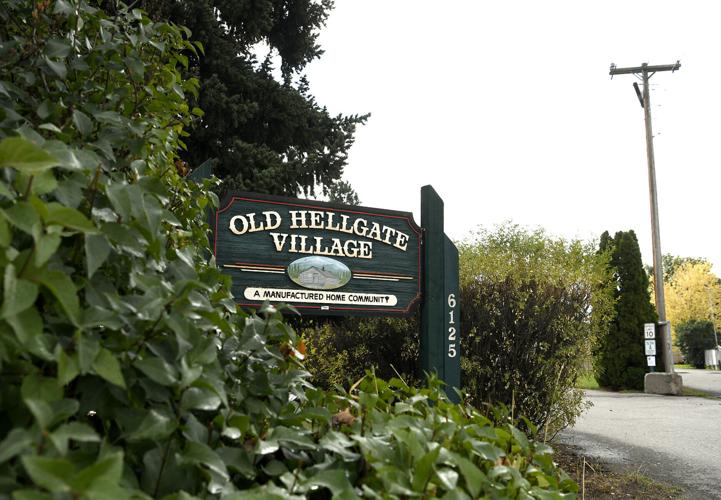 Linda Hartless and Barb Kasauskas, who both live in trailer homes in Missoula, have heard horror stories all their life of people getting displaced and forced to move when a trailer court is sold.

So when they found out that the trailer court where they live was being sold, they were worried they might meet the same fate.

“It’s scary,” Kasauskas said. “I mean, where do you put your home? And a lot of people don’t have the financial means, so it’s pretty scary. And we had the same anxiety here, you know? Because that’s a scary thing for people that they are losing their home.”

They both live in Old Hellgate Village, a 34-home trailer court on Mullan Road. Hartless has lived there for 15 years, and loves her mountain view and the fact that she can hear birds singing. Kasauskas has been there 10 years and loves the peace and quiet of the place.

And now they’ve managed to work out a way so that they can all stay as long as they want.

The community of Old Hellgate Village has banded together with the help of a nonprofit called NeighborWorks Montana to form a Resident-Owned Community. Essentially, the owners of the 34 homes have pooled their money together to take out a loan to buy the entire property as a collective. Now Kasauskas is the board president of Old Hellgate Village Inc., and Hartless is treasurer.

Resident-Owned Communities, sometimes called Resident-Owned Cooperatives, are gaining in popularity across the country. Trailer court residents own their homes but not the land underneath, and are often at risk of displacement or large rent increases.

There are now at least 1,000 trailer courts in the U.S. that have been converted to Resident-Owned Communities, and there are 17 in Montana, representing nearly 700 homes.

According to the American Community Survey, 10% of houses in Montana are mobile homes compared with 5.5% for the U.S. overall.

Kasauskas said she and her neighbors got a letter from NeighborWorks Montana in June informing them of the possibility.

“It’s kind of their vision to keep these kind of parks up and running for the low-income in the community and not be bought out by developers,” Kasauskas explained. “And so the seller decided to go that route with it and give us the opportunity to purchase it.”

Their lot rents will be going from $500 to $600 per month to cover the loan, but both Hartless and Kasauskas said they probably would have had that much of a hike before too long if the court was kept by a private landlord.

“Instead of the lot rent going to the previous owner, it’ll go to the loan we took out for the purchase,” Kasauskas explained.

Of course, it took a little bit of work to get everyone educated about the process. Kasauskas and Hartless talked to their neighbors about the advantages.

“I think we got 100% buy-in,” Kasauskas said. “There were a lot of questions, but in the end every resident who was eligible wanted to sign on.”

Hartless said she’s been so relieved since they decided to go that route. She’s seen the rent prices in Missoula, and she knows there are very few open spots at any trailer courts in the area.

“Just being able to sleep at night, instead of thinking, ‘Oh my God, what happens if they sell this place to a developer? What am I gonna do?’” she recalled. “Where would I live? I have limited income and I’m retired.”

They now have the peace of mind that they can’t get displaced.

“We’re buying the property, which, if we behave ourselves, we don’t have to worry about that ever again,” Hartless said, laughing.

Both women said Adam Poeschl, the ROC acquisition specialist at NeighborWorks, was extremely helpful throughout the process.

“It has been a lot of work,” Kasauskas said. “We had no idea what we were getting ourselves into, but we knew that we wanted to save our community. So somebody had to do it, why not me?”

They also are now more invested in where they live, financially and emotionally.

“I think that owning it as a community, being able to come together and make decisions that we would like to see for the park, like repairs and maintenance, is a big advantage,” Kasauskas said. “I personally would like to see maybe a nice park for the kids, and we can make those decisions as a community of what we want to do with the spaces and instead of having a landlord make those decisions, or having to wait for a landlord to be able or willing to make those repairs.”

They have plans for a big get-together after they officially close in October. Hartless said all the residents were friendly toward each other before, but they’ve really all gotten to know each other better now.

“And one of the other plus sides is I have met a lot of my neighbors I didn’t even know by name,” she said. “I walked around when I first took over the treasurer’s job and I’ve made a lot of new friends. Hopefully we can do some community-building things where everybody can get to know one another.”

"... I had no idea what I was going to do. It was awful. Definitely the hardest time of my life.”

Over a dozen people are living at an illegal campground west of Missoula and the residents say they've been forced to dump sewage tanks into a field nearby.

A Missoula man with a full-time job who lives in his RV blames the series "Breaking Bad" for the myth that all people living in campers cause crime.

A portion of the more than 900 residents of the Westview Mobile Home Court in Missoula have formed a tenant union in order to advocate for repairs and property upgrades.

More than 5,100 comments have been submitted to the Flathead National Forest about the project.

The Mexican Moose has a permanent location, the YWCA of Missoula has a new executive director, and Clearwater Federal Credit Union got a big federal award.

The Coordinated Entry System is designed to, among other things, provide services and keep people from dying in the streets in Missoula.

One recommendation is to allow duplexes, triplexes and fourplexes where single-family residences are allowed in cities of at least 50,000 residents in Montana.

GoFundMe: The most generous countries in the world

GoFundMe: The most generous countries in the world

A year on this 'hell planet' only lasts 17.5 hours

A year on this 'hell planet' only lasts 17.5 hours

Linda Hartless, left, and Barb Kasauskas stand in Old Hellgate Village trailer court, where the residents have banded together to buy the land under their homes. With help from NeighborWorks Montana, the homeowners pooled their money to take out a loan and form a Resident-Owned Community.

Some residents of the trailer park have used a long-abandoned pool to plant a garden at Old Hellgate Village.

Kasauskas, left, and Hartless said owning the trailer park as a community will let them make decisions on repairs and maintenance and even possibly turning a large open space into a park for the residents.