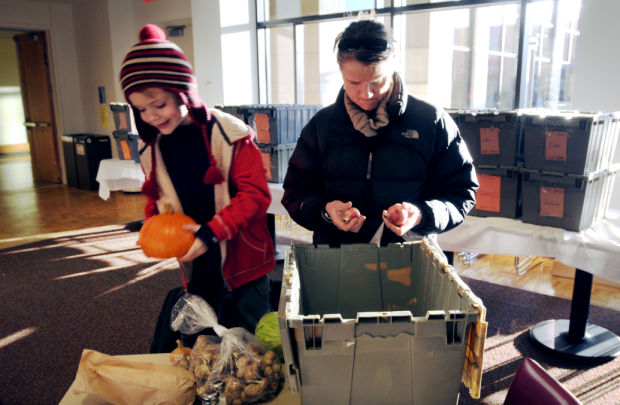 Mary Pat Hansen, a nurse practitioner at St. Patrick Hospital, and her son Will sort through their food allotment as members of St. Pat’s Food Smarts program last week. St. Pat’s works with the Western Montana Growers Cooperative, which provides the food. 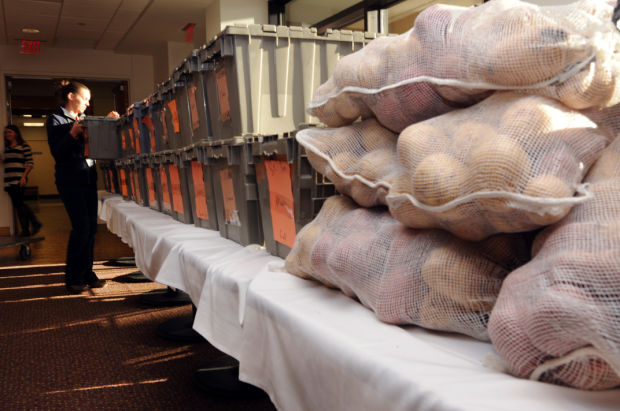 Hospital employees can sign up for the Food Smarts program, which offers locally grown food from 35 coop members between the Bitterroot Valley and Mission Valley.

An employee with the Western Montana Growers Cooperative, Costello delivers the fresh produce every two weeks at drop points around Missoula, helping fill the growing demand for locally grown and sustainable foods.

“How can you go wrong with things grown between the Bitterroot Valley and the Mission Valley?” said Costello. “This program really gets you closer to the farms and farmers, and the local produce keeps things within our general area.”

The Western Montana Growers Cooperative is enjoying its 10th anniversary this year. The effort launched by a collection of local farmers back in 2003 has undergone several transformations over the last decade, a span that has seen sales jump from $200,000 to nearly $1 million last year.

With its successes mounting, the cooperative last year contracted University of Montana professor Neva Hassanein and students in the environmental studies program to analyze the co-op’s role in the regional food economy and to help it make improvements.

The resulting 167-page report found that the co-op has grown each year in members and sales, along with the number of customers it serves and the pounds of produce it sells.

“They’ve grown from a scrappy little business to a $1 million a year business,” said Hassanein. “They have about 35 members that provide varying amounts of products they sell and distribute through the co-op.”

The co-op’s gross sales have increased since 2006 at an average annual rate of 30.8 percent. Health food stores generated 47 percent of those sales in 2011, followed by grocery stores at 26 percent, restaurants at 14 percent, and institutions at 7 percent.

The Community Supported Agriculture (CSA) program also has grown, thanks in part to efforts implemented by St. Patrick Hospital and other large institutions around Missoula.

St. Pat’s recently launched its Food Smarts program, a hospital-wide initiative to bring healthier foods to patients, staff and visitors. In doing so, the hospital put its full support behind the co-op, its growers and the CSA program.

“The number of people participating in the CSA program has doubled from what it was last year,” said Missy Kelleher, the hospital’s food services director. “The interest has skyrocketed this year.”

As part of its push, the hospital adopted a sustainable food policy that decreased everything from meat to plastic bottles. In their place, St. Pat’s turned to the co-op for local and sustainable produce, ranging from Montana grains to local cabbage and potatoes.

“You have to think outside the box when it comes to some Montana food products,” said Tim Waddle, the hospital’s executive chef. “There’s a plethora of root vegetables and very interesting grains we get. It’s been great working with the people at the co-op.”

The CSA shipment delivered by the co-op on Thursday included more than two-dozen boxes filled with cabbage, onions, garlic, two types of winter squash, and Jerusalem artichokes from Ploughshare Farms in Moiese.

Much of the co-op’s growth has come through the sales of such products, though vegetables have brought in the least. While 62 percent of co-op members contributed to the vegetable category, the sales accounted for just 30 percent of total sales in 2011.

In contrast, the UM study found that products such as fruit, eggs, dairy and poultry combined to account for 55 percent of annual sales, even though just 38 percent of the co-op’s members contributed to the categories.

“I was fascinated by the various social and economic relationships that have developed in the process of the co-op becoming more of an established business,” said Hassanein. “It’s not just about the food miles. It’s about these really important relationships we develop in the supply chain.”

Some growers sell more than others, but they all play a part in keeping the larger co-op solvent. Members must be producers who sell through the co-op. In doing so, they become part owner in the larger conglomerate.

“They’re democratically controlled and profits go back to member-owners, or get reinvested in the business,” said Hassanein. “Cooperatives provide a real opportunity for a healthy business operation that works at the local level.”

While the UM study looked at the co-op’s successes, it also identified areas open for improvement, including matters of transportation, packaging and distribution. The group also has talked about leaving Arlee for a more spacious and central location in Missoula.

Dave Prather, the co-op’s general manager, said the move would greatly enhance distribution. Several locations are being studied, and he expects the new center to open by May.

“Arlee is a good spot for our production, but about 75 percent of what we sell goes to or through Missoula,” Prather said. “For distribution’s sake, it’ll be really big. We’ve outgrown our space in Arlee.”

The study also noted an opportunity for the co-op to further expand into the grocery market. Creating more value-added products, such as diced and frozen butter-nut squash processed at the Mission Mountain Food Enterprise Center in Ronan, could benefit the co-op and its growers.

“It makes it easier for schools in the area to buy local products and get them year-round in packages that’s easy for them,” said Laura Ginsburg, who worked on the study as a UM student before getting a job at Mission Mountain.

“That’s what institutions want,” she added. “They want products that are ready for them to use. The co-op is ready to expand into that market and the growers are ready too.”

Expanding the market for local foods could give the co-op more stability by essentially expanding the season, Hassanein said.

“By doing this value-added processing and doing it at a reasonable cost, the co-op can continue to serve institutions during winter,” Hassanein said.

“You’d think the growers would be competing with one another, but instead they’re partnering and helping one another,” she added. “It’s an important type of relationship if we’re going to make these local food systems work.”

The beer display for Super Bowl XLVIII is coming down, and none too soon for Denver Broncos fans looking to put Sunday’s game behind them.

Creston man is one of Montana's last mint farmers

CRESTON – Kirk Passmore stands in his farmland, looking at the green mint plants sprouting from the fertile Flathead Valley soil. Not far off,…

Mary Pat Hansen, a nurse practitioner at St. Patrick Hospital, and her son Will sort through their food allotment as members of St. Pat’s Food Smarts program last week. St. Pat’s works with the Western Montana Growers Cooperative, which provides the food.

Hospital employees can sign up for the Food Smarts program, which offers locally grown food from 35 coop members between the Bitterroot Valley and Mission Valley.