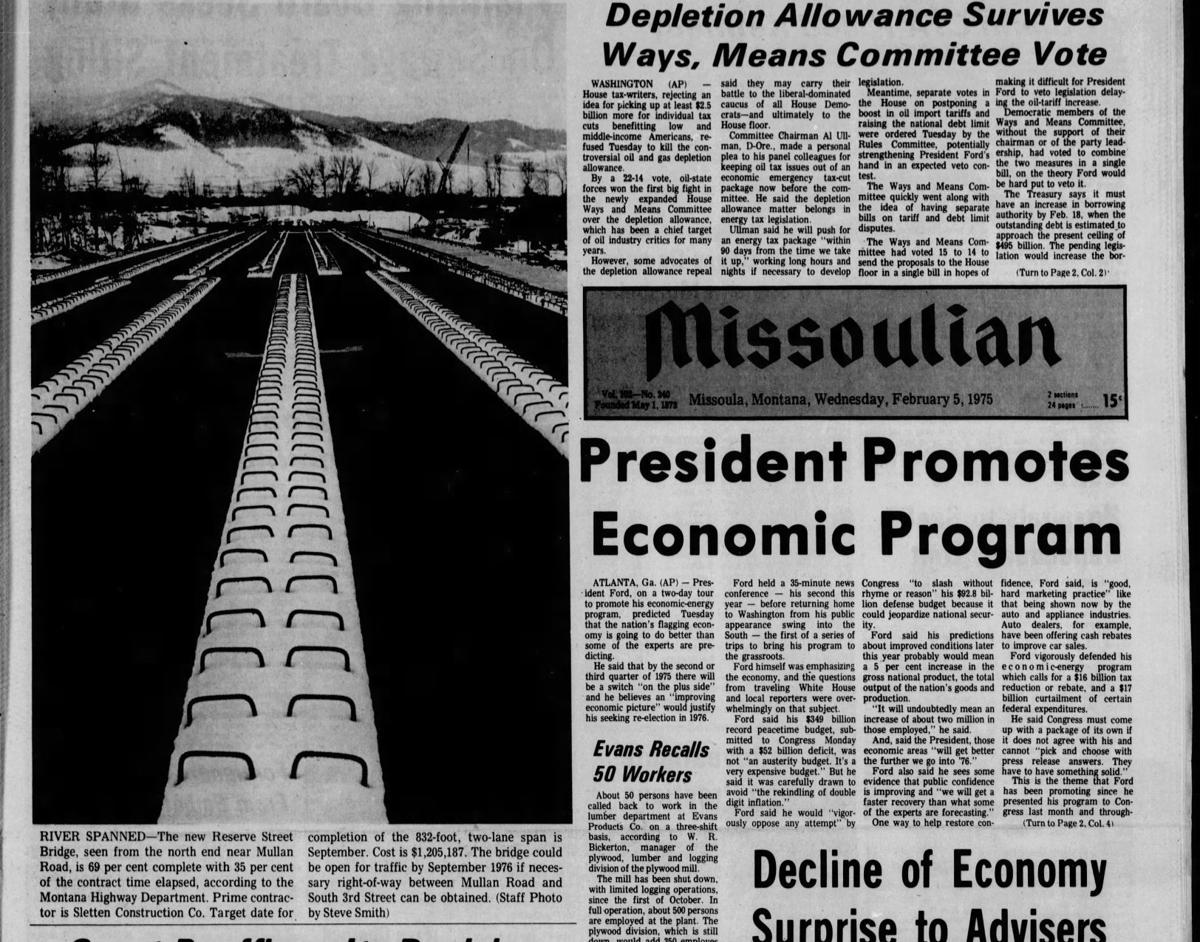 If you're picturing heifers dodging four lanes of high-speed traffic, stop right there.

This was in 1938. Reserve, more commonly referred to as "the Reserve road south of Missoula," was a country road running from Third Street to and past the Fort Missoula military reserve.

For some reason the lost cows merited a blurb in the back pages of the Missoulian, probably because the man who found them was Missoula County Commissioner Lewis Felton. He was holding them for the time being but warned if they weren’t claimed soon, he'd start charging pasturage and damage costs.

It caught Missoula Rewound's eye simply because it was the first time Reserve was called a street in the daily paper. More than 80 years later, it's still that — on steroids.

It's U.S. Highway 93's route through Missoula, bridged across the Clark Fork River, lined by offices, businesses, houses and the county golf course. Last week Missoula city and county forces from the Metropolitan Planning Organization launched a community input project with a public forum to come to grips with the mess. Wandering cows were not among the gripes.

Let's fast forward from 1938, past the paving of Reserve south from Fort Missoula to Highway 93 in 1941 that was hailed as a new highway bypass, past the fender benders and "molested" mailboxes at the corner of Third and Reserve, and past the decades-long discussion of extending the street north across the Clark Fork River.

“Yes, Missoula, there really is a Reserve Street Bridge,” began reporter Annette Taylor. “And, believe it or not, it’s open. About 2 p.m. Friday, the first legal public traffic crossed the four-year-old bridge.”

Taylor said no ribbon cuttings and no speechifying about the beauties of a new Missoula bypass accompanied the opening.

“It was simply a matter of shoving aside the battered, four-year-old 'road closed' signs and letting hundreds of vehicles roll across the two-lane blacktop.”

The bridge was built in 1975, “then forlornly waited for the roads leading up to it to be connected,” op-ed page editor Sam Reynolds noted wryly a week later. “At last it’s open. Two cheers.”

Two hours after the bridge's un-grand opening, Taylor talked to Jim Weaver of the Montana Highway Department, who told her the two-lane bridge “probably will be inadequate in the near future.”

“I guess you could say it’s obsolete,” Weaver said.

Now jump over a bunch of Reserve Street developments to 1994. The highway department is now called the Montana Department of Transportation, but Weaver is still its Missoula district engineer. Cars are backing up for a mile north and south of Mullan Road at rush hour.

"It's close to gridlock," Weaver told the Missoulian's Michael Downs. "It's the worst congestion I've ever seen in Missoula."

The problem, as Downs explained, was that Reserve Street south of South Third had been widened the previous summer to five lanes, including a center turn lane.

"But north of Third, the roadway abruptly narrows to three lanes and then, quickly, to two," Downs said.

"We knew what was going to happen, but we simply didn't have the funding to finish the job," Weaver said. "It was more money than Missoula had in its pot."

One more jump back to the future.

We land this time on North Reserve on July 6, 1999 — 20 years and a few weeks after the Reserve Street bridge was first opened. Over the previous 15 months a wider bridge had been built to replace the two-lane span over the river, the Milwaukee Road overpass had been removed and Reserve was at least a four-lane highway, with a fifth center turn lane in most places, from Brooks Street near K-Mart to Interstate 90.

Local officials, business people and U.S. Sen. Max Baucus stood across from Costco, armed with scissors to snip a red ribbon and formally open the $22-million stretch of Reserve that exists today.

Reporter John Stucke said the short ceremony was "nearly drowned out by cars whizzing past, trucks rumbling by with deliveries to new chain stores and jets landing at the ever-busier nearby airport."

Men and women in suits, dress loafers and high heels "negotiated unfinished boulevards and wandered into the street lanes to declare in front of the cameras that the project was done," Stucke wrote.

It wasn't, obviously. "But motorists can pretty much drive hassle free the entire way."

Some people, then and now, would dispute that assertion. No one's asking the cows.

Each Monday the Missoulian dives into its online archives, missoulian.newspapers.com, to plumb stories from Missoula's and Western Montana's past.

Weeks after the assassination of Martin Luther King Jr. in 1968, in the midst of the racial unrest that followed, President Robert Pantzer announced a new scholarship on the University of Montana campus.

Leslie Bush: Accept congratulations on the fine game you pitched. Citizens are all rejoicing over your victory. Give regards to Bohen. MISSOUL…

From a Missoula once home to the Cyrus Skinner Steakhouse we bring you, or soon will, the Cranky Sam Public House on West Main Street.

Canceled flights have become a way of life at Missoula International Airport as the coronavirus rages on.

Hyperbole runs through it: The art of fishing and its aftermath

There’s more than one way to tell a fish story.