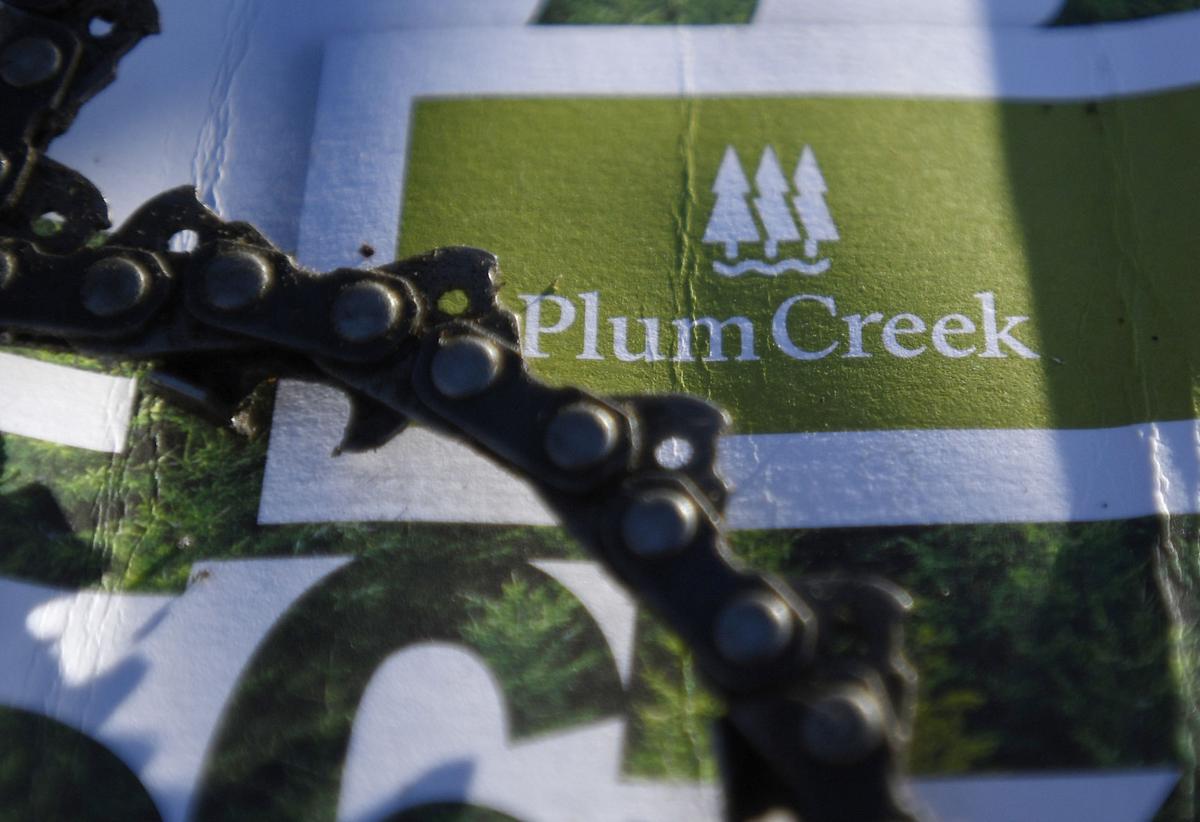 An old chainsaw chain and a copy of sustainable forestry practices are the only hints that the large office building at 140 Russell St. used to be the base of Plum Creek Timber Co. in Missoula. New owner Weyerhaeuser Corp. closed the building earlier this year as it concentrated its forestry staff at its Seattle headquarters. 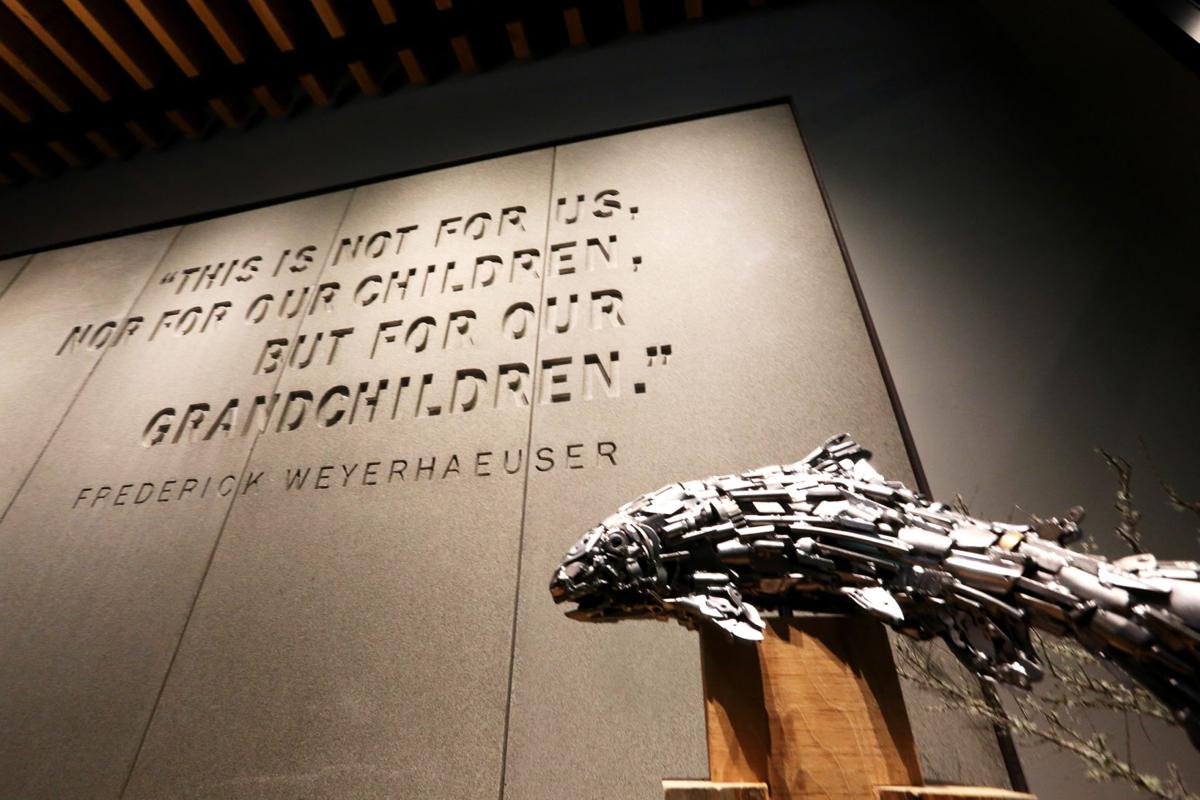 The Weyerhaeuser company has moved from their massive headquarters in Federal Way, Washington to a new location in Seattle's Pioneer Square last summer. In the lobby on the wall is a quote from Frederick Weyerhaeuser. The fish was created by Portland-based sculptor, Travis Pond. 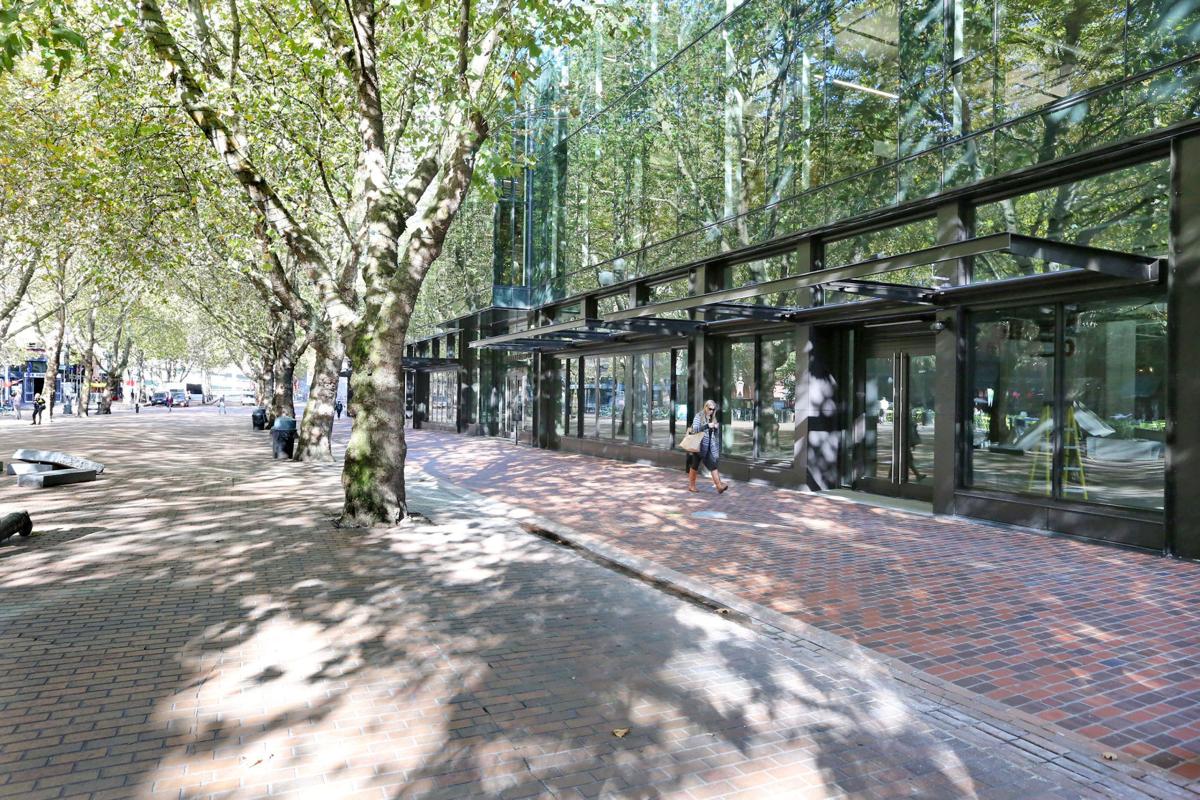 Mirrored windows reflect the surrounding trees at the new Weyerhaeuser Corp. headquarters in downtown Seattle. Montana timber industry watchers wonder what the company, which is the largest single landowner in the state, plans to do with its assets here.

Tom Ray does not speculate in public about Weyerhaeuser Corp.’s future.

He wants it clear that the new owner of 786,000 acres of private timberland will continue the old Plum Creek tradition of allowing hunting and berry-picking on its property. He acknowledges that about 100 white-collar jobs will soon leave Columbia Falls when Weyerhaeuser finishes consolidating its management staff needs. That’s in addition to the closures of plywood and stud mills in Columbia Falls that ended jobs for 72 more workers.

“But when you talk about policy or the future and speculation, we leave that to the Montana Wood Products Association (MWPA),” Ray said in a recent interview. “We have an adequate supply for the mills that we’re currently running. I don’t have anything else to offer now.”

MWPA Director Julia Altemus has developed a list of proposals for Congress to consider with Weyerhaeuser's input. But that hasn’t given her much insight on the company’s direction.

“Weyerhaeuser is still in transition with the merger,” Altemus said. “I don’t have a read on that whatsoever. I know they look to our federal partners for timber supply and they’re bidding on several sales.”

Weyerhaeuser bought Plum Creek for $8.44 billion in February. In addition to those Montana lands, it picked up about 6 million acres more that Plum Creek held elsewhere in the nation – mostly in the Southeast. About 60 percent of Plum Creek’s workforce was in Montana before the merger.

Four months later, Weyerhaeuser announced it would permanently close the two Columbia Falls mills, transferring 146 of the workers to its three remaining plants. One makes medium-density fiberboard in Columbia Falls. The other two make lumber and plywood in Evergreen.

“For some time now our operations in Montana have been running below capacity as a result of an ongoing shortage of logs in the region,” Weyerhaeuser president and chief executive officer Doyle R. Simons said in June. The log shortage had been going on for more than a decade, Simons said.

That’s just part of the changes Weyerhaeuser has undergone recently. In 2012, it had $10.4 billion in assets, including 6 million acres of timber land, wood mills, fiberboard plants making things like juice-box paper, as well as a real estate development and home-building subsidiary.

By 2016, that pie chart had simplified. The graph now shows two slices: 13 million acres of timberland and a wood-products division worth a total of $17.3 billion.

In early October, Weyerhaeuser announced plans to sell its North Pacific Paper Co. in Longview, Washington. That plant makes newsprint and printing paper, including some of the stock used in the Missoulian. It also has sold its Longview-based liquid-packaging board plant (used for making juice boxes) to Nippon Paper Industries.

It has also sold off its home-building business, Quadrant. It appears to be getting out of its holdings in South America, including a 300,000-acre timberland and mill operation in Uruguay.

“They’re financially strong,” said Tom Kerr of S.G. Long Co.’s Missoula investment office. “They’re not over-leveraged and they have enough cash on hand to cover their dividend. And they’re a REIT, not just a timber company. They’re a well-run, well-managed company."

Real Estate Investment Trusts, or REITs, have become the dominant format for the big timber companies in the United States. Most REITs own properties like apartments or shopping malls, and make their income from rent payments. Timber companies can earn "rent" when they sell the timber growing on their lands. Or they can profit by selling their lands.

REITs by law must pass at least 90 percent of their annual profits directly to shareholders. The corporation doesn’t pay corporate income tax on that money – up to 35 percent savings. And the shareholders don’t pay personal income tax on their receipts. They get taxed at the 15 percent capital gains rate. Institutional investors like pension funds get even more tax-exempt benefits from holding REIT shares.

“As a property owner, you’ve got this vast amount of acreage, said Bob Seidenschwarz of S.G. Long. “The challenge is how do you unlock the value? If you’re a timber company, you can cut trees down, plane it, and sell the timber. Becoming an REIT allowed them different ways of unlocking the value.”

Plum Creek became a REIT in 1999 – the first timber company to take advantage of the new format. At the time, it owned about 3.2 million acres of timberland. It quickly started unloading some of its already-harvested property, starting with 89,000 acres to the Blackfoot Challenge in 2004 for $70 million. The Montana Legacy Project followed, passing 310,000 acres at a total cost of $490 million.

“Almost every major timber company that owned a lot of land has changed its business mode from one big company to many smaller companies, each in charge of a different aspect,” said Peter Kolb, Montana State University extension forester. “In my perspective, that’s not a good thing. Thirty years ago, there were 16 or 17 major corporate timber companies, who owned the bulk of the private timberland across the U.S. Every single one of them is gone now.”

That split between large and small timber businesses has some fascinating financial side effects, according to retired University of Montana forestry economist Alan McQuillan.

“A 1980s study concluded that most timber companies so undervalued their lands, you could buy all their land for fair market value and get the mills for free,” McQuillan said. “That’s because corporate timber types weren’t used to looking at land and seeing future investment. In business, the short term is three to six months and long term is five years. In silvaculture, the rotation age is 60 years – or in Montana, more like 100 years. So the best way to buy timber is to buy whole companies, because the stock is undervalued.”

Pyramid Resource Manager Gordy Sanders came to a similar conclusion as McQuillan regarding his big neighbor up the road.

“When Weyerhaeuser wound up with all this land in Montana, it could be because it came with 6.5 million acres elsewhere,” Sanders said. “It may have had nothing to do with the resources here in Montana. Large corporations will look at opportunities to make investments which they fully intend to unload, because they’re not attached to anything except the return to the bottom line. When it no longer meets the criteria for return, they unload and do something different.”

Which opens a bigger question regarding Weyerhaeuser's presence in Big Sky Country. It may be the state's largest single property owner, but does it plan to stick around?

“Montana is still a relatively small part of (Weyerhaeuser's) whole picture," Kerr said. "Oregon and Washington are big for them. Canada is big. The Southeast is big. Whether they’re committed to Montana – that’s a tough question to answer.”

Where does wood come from? Nature and business shape Montana's forests

PRIMM MEADOW – What lesson should we take from a walk through this 500-year-old stand of Ponderosa pine?

Ben Smith grew up in a logging family.

If you want to visualize Missoula's timber history, ride a bike.

About the timber industry series

Look any direction from Missoula and you’ll see thick forests. So why does Montana’s timber industry struggle to find enough wood to cut? This…

My family history has been split between forests and trees.

COLUMBIA FALLS - From the gateway on Half Moon Road, F.H. Stoltze Land and Lumber looks a lot like it did in 1923.

Missoula, the timber industry and the University of Montana have a fractured family relationship.

An old chainsaw chain and a copy of sustainable forestry practices are the only hints that the large office building at 140 Russell St. used to be the base of Plum Creek Timber Co. in Missoula. New owner Weyerhaeuser Corp. closed the building earlier this year as it concentrated its forestry staff at its Seattle headquarters.

The Weyerhaeuser company has moved from their massive headquarters in Federal Way, Washington to a new location in Seattle's Pioneer Square last summer. In the lobby on the wall is a quote from Frederick Weyerhaeuser. The fish was created by Portland-based sculptor, Travis Pond.

Mirrored windows reflect the surrounding trees at the new Weyerhaeuser Corp. headquarters in downtown Seattle. Montana timber industry watchers wonder what the company, which is the largest single landowner in the state, plans to do with its assets here.