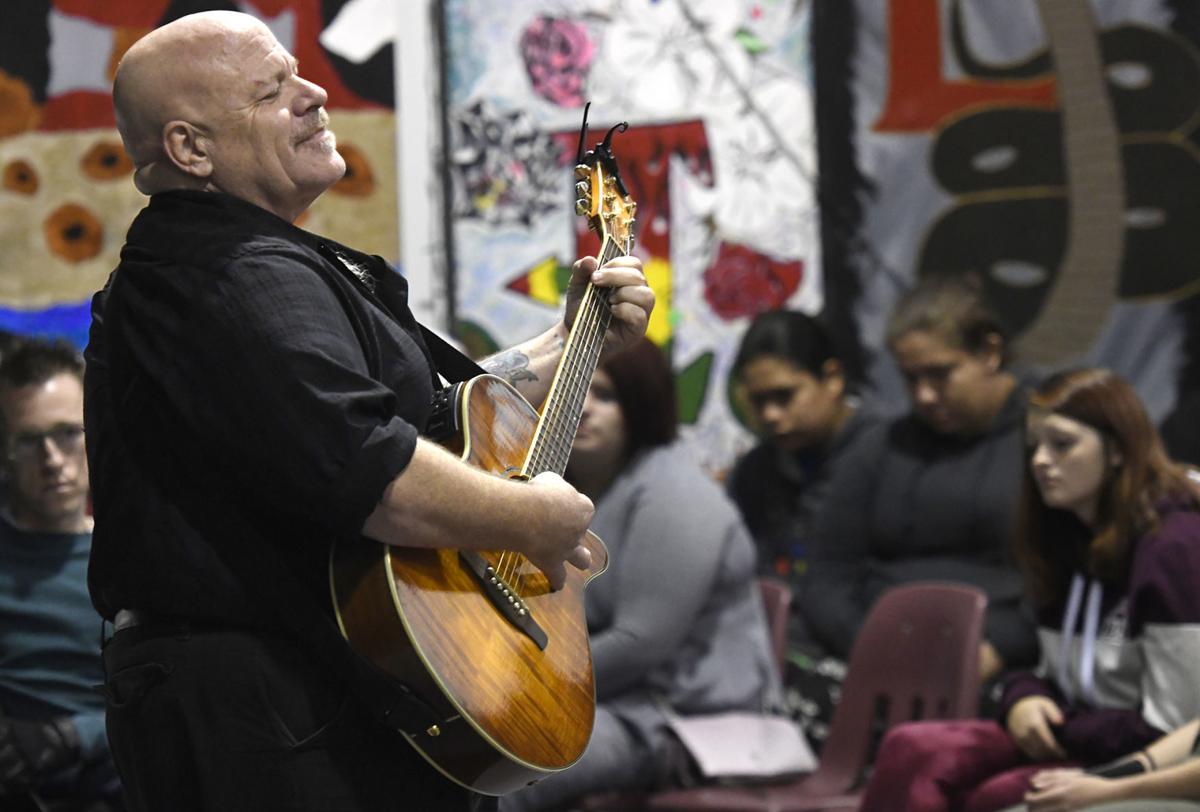 David Simmons plays guitar for Willard Alternative School students on Wednesday. Simmons kicked off a three-day songwriting workshop focused on suicide prevention. The workshop is one of many events organized by United Way of Missoula County for this week's National Suicide Prevention Week. 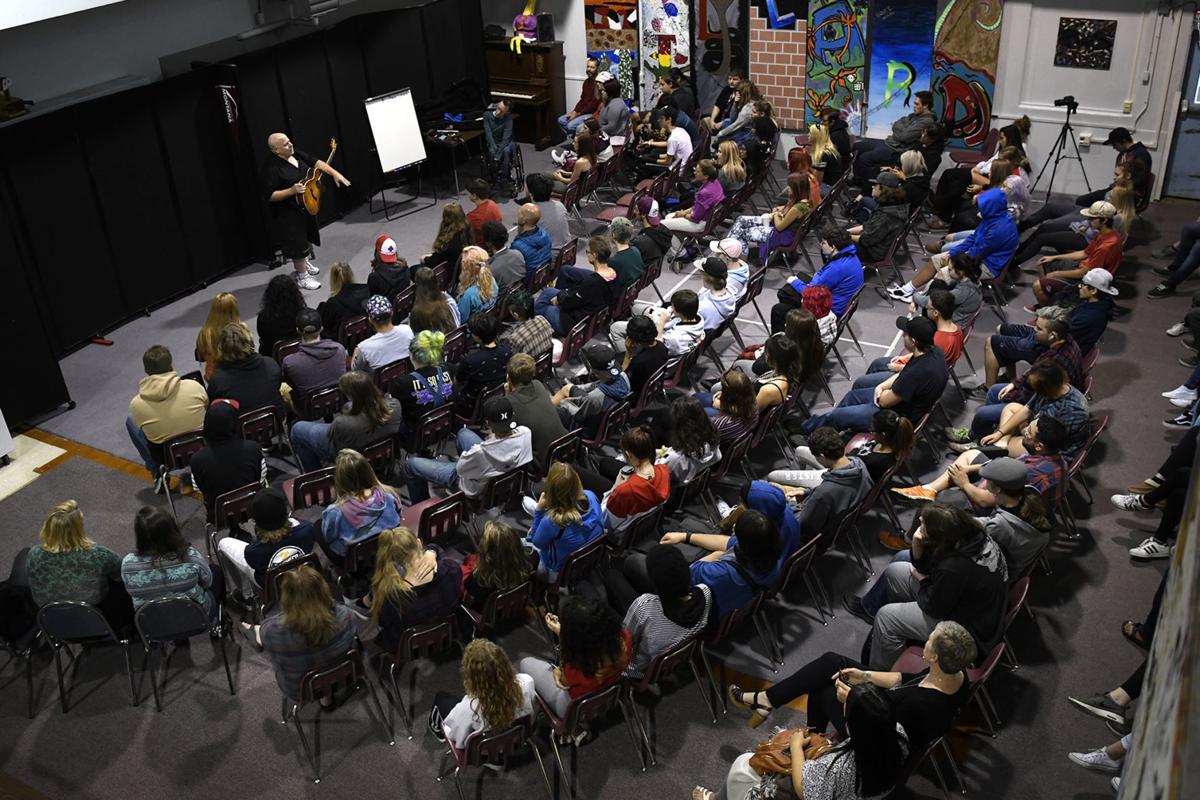 Simmons he survived a suicide attempt in 2009. He sought treatment, recovered and ultimately came to see the experience as an opportunity to help people struggling with similar issues.

Instead of attending their morning classes, the high schoolers gathered for an assembly with guest David Simmons to kick off a three-day songwriting workshop focused on suicide prevention. Simmons, a Missoula native, founded the UBU (You Be You) project that uses arts to enhance curricula.

The workshop is one of many events organized by United Way of Missoula County for this week's National Suicide Prevention Week. Each event aims to shine a light on mental health issues and suicide prevention in Missoula County by increasing awareness and providing resources for support. For one of the events, students at Willard will work with Simmons to write a song that focuses on the theme of celebrating life.

“Our kids are artistic and they like to express themselves,” Willard Principal Kevin Ritchlin said. “This seemed like a good opportunity for them to do that.”

Suicide prevention is something that hits close to home for Simmons. In 2009, he survived a suicide attempt. He sought treatment, recovered and ultimately came to see the experience as an opportunity to help people struggling with similar issues.

Simmons then decided that he wanted to work with kids at risk by helping them tell their stories through song. He had worked in the music industry nearly his entire life and it seemed like the perfect fit.

Students at Willard familiarized themselves with Simmons' storytelling when he picked up a guitar at the assembly and began to play a song that he wrote. The song featured the chorus “turn this ship around,” and focused on his mantra of never giving up.

Following the assembly, the first group of students to work with Simmons gathered in the auditorium.

He introduced traditional Elizabethan sonnet format, which consists of four-line verses that follow an A-B-A-B rhyming structure. A rhymes with A and B rhymes with B.

Simmons prompted the high schoolers to think of words or phrases to hook the audience. After several suggestions, the group focused on the word “light” and settled on the line: “I believe there is a shining light.” Soon, they added a second: “I don’t know where it is I should go.”

Then came the time to rhyme. In order to follow the A-B-A-B structure, students needed to think of words that rhymed with “light” in the first line and “go” in the second.

Simmons filled a whiteboard with suggestions from students and encouraged them to see the song as a story that would need to carry the listener from beginning to end. The more the students participated, the more comfortable they became expressing their ideas. By the time they got to the last line, the group was collaborating as if songwriting was something they did every day.

“I need to find some place to grow,” Apollo Moura said, as a suggestion for the last line of the verse.

Another student suggested a line with the phrase “stepping out of the shadows,” which resonated with the group.

“What about “I must escape the shadows, give me strength to grow?” Kendra Mccrossin said.

The group unanimously agreed on Mccrossin’s suggestion to complete the first verse. By the end of the session, the whiteboard read:

A (1) I believe there is a shining light.

A (3) Is it really worth me putting up a fight?

B (4) I must escape the shadows because I need to grow.

Simmons said that each group of students will build on what the others have already created. Three of the groups will create verses and another group will create the chorus. Once they’ve finished the song and picked a style in which to perform it, students will have the opportunity to perform with Simmons at a public concert.

Although he noted the venue is small, Simmons encouraged everyone to attend. The final performance will be on Friday, at 7 p.m., at the Public House, 103 E. Broadway.

Missoula schools back in session amid ongoing construction

Back to school: All the changes Missoula families need to know

As Missoula's public schools open their doors this week, there are a few changes parents and students should note.

Hall Passages: The return of the Willard Wire

The classroom that houses the Willard Wire, the student newspaper at Willard Alternative School, is decorated nearly floor to ceiling.

Later school start times are better for teens, but MCPS says cost may be too high

It's no secret teenagers like to sleep in, and science says they're better off if they do.

Volunteers use game day to raise awareness on suicide

As fans entered Washington-Grizzly Stadium before Montana's game against Drake on Saturday, they were greeted with a reminder that help is ava…

Hard hats, welding hoods, earplugs and safety glasses were some of the items students in industrial technology classes at Sentinel High School…

The Arlee boy’s basketball team, the Warriors, will be visiting Big Sky High School on Wednesday to share their message of hope, talk about su…

Arlee School District will receive about $150,000 to increase mental health resources for students and establish a crisis intervention team th…

David Simmons plays guitar for Willard Alternative School students on Wednesday. Simmons kicked off a three-day songwriting workshop focused on suicide prevention. The workshop is one of many events organized by United Way of Missoula County for this week's National Suicide Prevention Week.

Simmons he survived a suicide attempt in 2009. He sought treatment, recovered and ultimately came to see the experience as an opportunity to help people struggling with similar issues.