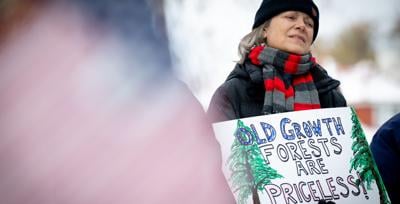 In Dr. Seuss' "The Lorax," the famed rhyme-writer conjured a furry, mustachioed creature to "speak for the trees, for the trees have no tongues."

Outside the U.S. Forest Service Region 1 headquarters in Missoula last Monday, the trees spoke for themselves. With seasoned activists dressed up as trees, a group of protesters from a cross-section of environmental and wildlife conservation groups assembled on the steps of the agency's office at the historic Fort Missoula at 12:30 p.m. With signs, petitions, maps, speeches and hot chocolate — and a few pine boughs taped to heads and extremities — the group demonstrated for an hour amid soft snow and chilly temperatures.

Their core demand was simple. They wanted the Forest Service to make a permanent rule protecting mature and old-growth trees from being cut down. The threats to those trees, however, are far more complex, they said, ranging from logging projects and forest treatments aimed at reducing wildfire risk (the premise of which the groups dismissed as bogus "chainsaw medicine") to how the agency inventories old-growth stands and whether young forests can mature into old growth and make up for current logging. Speakers described the federal agency as a pro-logging bureaucracy reluctant to follow orders to inventory and protect mature and old-growth timber stands that hold immense value for the environment and logging industry alike.

The trees, the protesters repeatedly stated, are "worth more standing."

The protest last week was one of many at Forest Service regional headquarters nationwide coordinated by the Climate Forests Campaign, according to Adam Rissien, the rewilding manager at WildEarth Guardians. He presented a letter to the Region 1 headquarters asking for a permanent rule protecting mature and old-growth trees. WildEarth Guardians is one of hundreds of environmental and conservation groups that are members of the Climate Forests Campaign, he said. Counting each group's members, plus about 5,100 petition signatures, he characterized the letter to the Forest Service as having 5 million supporters.

Jeff Juel, the Montana policy director for Friends of the Clearwater, said he believed that "the managers of our national forests do not share those values" of mature and old-growth forests being inherently vital for carbon storage and habitat, not to mention tranquility and low-impact recreation. "The Forest Service sees these same forests as unhealthy," he said, and uses that perspective as a justification for management that he deemed "chainsaw medicine." Humans may be able to manage newer forests into old growth, he said, but the results would be centuries away — too late to make up for cutting down old trees now.

Public knowledge of mature and old-growth timber stands, he said, "is the last thing the Forest Service wants," and he reiterated Rissien's charge that the agency has been loath to follow mandates to inventory and publicize such stands.

A Region 1 spokesperson did not reply to a request for comment before deadline Friday.

Part of the tension stems from varying conceptions of what constitutes mature and old-growth forests. The terms could be applied liberally to simply mean timber stands with large, old trees that are mostly free from human disturbance. Or the terms could be taken more narrowly to mean only stands with a certain amount of trees older than 150 years or more that exceed a certain trunk diameter. Environmental groups often use broader conceptions of mature and old-growth forest than the U.S. Forest Service. Definitions can also vary by location and species.

Tom Spies, a Forest Service Research and Development emeritus scientist and a professor at Oregon State University's College of Forestry, told Yale Climate Connections in 2019 that different groups can use that variability to serve their own agendas: "If you approach the issue with a particular agenda, you can take a really narrow definition that would exclude a lot of forest from being defined as old growth. Or you can have a very broad definition which would capture a lot of forest conditions."

But scientists agree that large, old trees store immense amounts of carbon within them, preventing it from being released into the atmosphere and further contributing to climate change. By failing to provide comprehensive protections for mature and old-growth trees, the protesters argued Monday, the Forest Service is shirking responsibility to protect the environment.

"We cannot have carbon deniers managing our forests," Juel said, suggesting that the Forest Service might need to be dismantled.

Rissien cited the controversial Black Ram Project — a mix of commercial logging, thinning and prescribed burning in northwestern Montana's Kootenai National Forest — as one example of destruction of old trees.

According to the Forest Service's decision to approve the project, "of the 91,647 acres of National Forest System land within the Black Ram project area, 13,705 acres are old growth. There are 579 acres proposed for intermediate harvest that meet the definition of old growth and are supported by scientific basis and rationale as to why vegetation management would be the most effective strategy in increasing resilience. There is no clear-cutting (or any type of regeneration harvest) of any old growth stand in this project."

The Forest Service, in consultation with the U.S. Fish & Wildlife Service, stated that the project won't impact, or is unlikely to impact, species including bull trout, lynx and grizzly bears.

"Along with all this logging comes road building," Rissien said, arguing that the project would be to the significant detriment of an already "imperiled population" of 20–30 grizzly bears in the Yaak Valley. WildEarth Guardians is among the groups suing the Forest Service and Fish & Wildlife Service over their determinations.

Micki Long, of Montana Audubon and Bitterroot Audubon Society, explained that a variety of birds, including species of concern in Montana, rely specifically on mature and old-growth forest for habitat they generally cannot find elsewhere. She cited the tiny flammulated owl, which stands about 6 inches tall and weighs only 60 grams. Timber stands with a high percentage of mature and old-growth trees offer habitat for mating pairs of the bird, she said, which reproduces infrequently. But stands without high percentage of such trees generally don't have mating pairs of the owl, inhibiting its reproduction and population.

Because the recruitment of newer trees into eventual old-growth forest could take centuries, she said, "let's leave the ones that we have."

Dressed as a tree, Mary Alexine, of the grassroots group Great Old Broads for Wilderness, spoke of a trip she and nine other "Great Old Broads" took to the area of the Black Ram Project. She described how the group traversed clear-cut forest and fire breaks in "sweltering heat," only to find reprieve in the cool, damp environs of mature forest.

Michelle Dietrich of Friends of the Bitterroot cited another project, much closer to Missoula: the Bitterroot Front Project. Covering much of the non-wilderness portions of the Bitterroot National Forest, the 144,000-acre forest-thinning proposal — which the Forest Service says will reduce wildfire risk to homes along the Bitterroot Range — represents a "monumental loss of carbon storage," she said.

Forest Service leaders and wildland firefighters often cite incidents in which forest fires are slowed down or reduced in severity upon running into areas where fuels have been thinned — particularly "ladder fuels" that allow ground fire to burn up into tree crowns. Clearing ground and ladder fuels, and constructing clear-cut fire breaks is a primary method of containing wildfire.

Dense forests in much of the West are not natural, thinning proponents argue, but rather are the product of a century of human influence via logging and full-suppression firefighting. Trying to stop and put out all wildfires, they say, has resulted in unnaturally overgrown forests that are far denser than historic stands that were kept thin by regular, often lower-intensity fire every decade or so. Proponents also cite studies showing that current, unmanaged forest conditions in many places differ vastly from historic forest conditions prior to the advent of full-suppression firefighting. By thinning forests, they can be returned to something approximately like historic conditions, in which "maintenance" or "disturbance" fire can pass through quickly and mostly on the ground, without growing into a ferocious crown fire.

Opponents of thinning say that clearing out smaller or less healthy trees and brush from forests makes forests more open to high winds that drive wildfires into raging infernos. By reducing the shade trees provide, they say, ground fuels will dry out more than in a denser, shadier forest.

Dietrich, with the face of The Lorax on her hat, argued that forest thinning doesn't protect homes from wildfire. About half the homes lost in the 2016 Roaring Lion fire had thinned around their property as advised, she said, but the thinning didn't save them.

A major forestry and fuels treatment project proposed for the Bitterroot National Forest has community members and stakeholder groups divided on whether thinning the forest is the best way to reduce wildfire risk and enhance habitat, and whether the U.S. Forest Service's approach to analyzing the project provides adequate analysis and public input.

Thanksgiving edition of Missoulian to be delivered Wednesday

The Missoulian will not produce a print edition on Thursday, but an online digital version of that day’s newspaper will be available online.

The U.S. Fish and Wildlife Service was in the process of planning to reintroduce grizzly bears in the North Cascades when the Trump Administration terminated the project in July 2020.

From herds of elk and packs of coyotes to opportunistic, wandering black bears, the Sellman family is familiar with having wildlife all around… 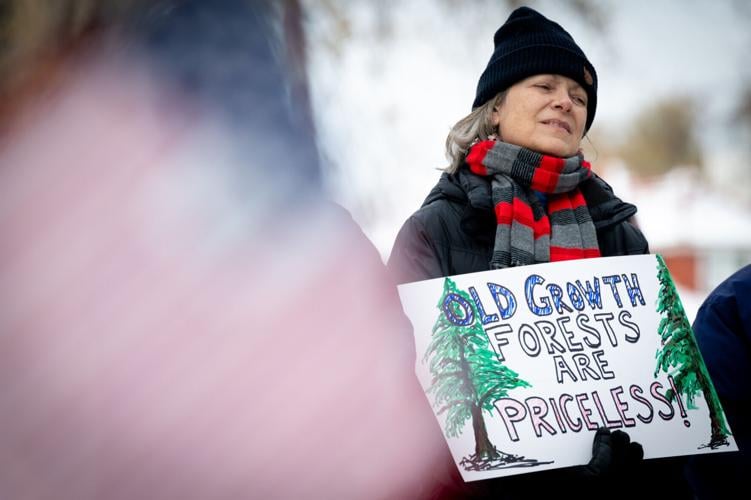 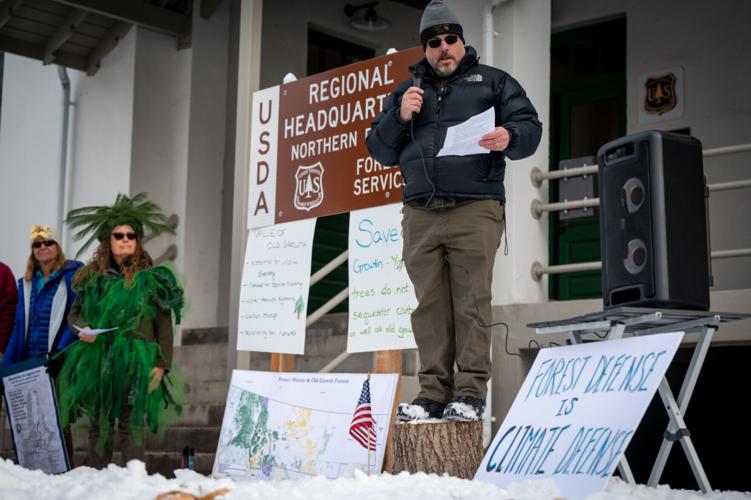 Adam Rissien, rewilding manager with WildEarth Guardians, speaks in front of rally goers as he denounces actions taken by the U.S. Forest Service regarding commercial logging in old-growth and mature forests of Montana. “Mature and old-growth forests not only store a vast amount of carbon, but these forests also provide clean water and crucial wildlife habitat necessary to also address our biodiversity crisis,” he said. 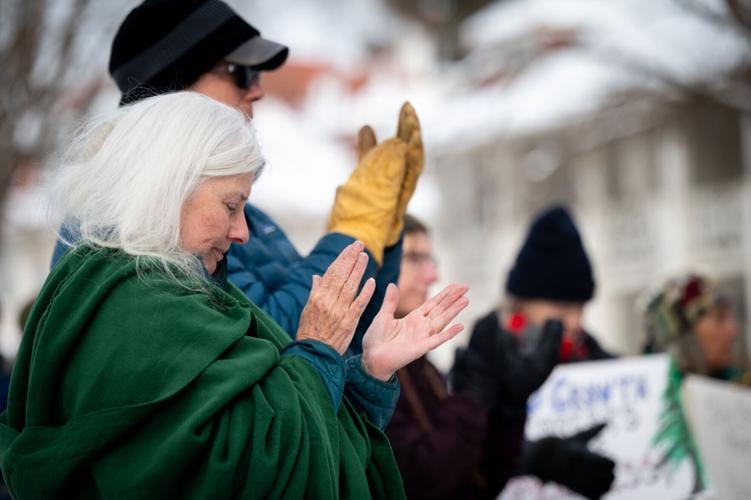 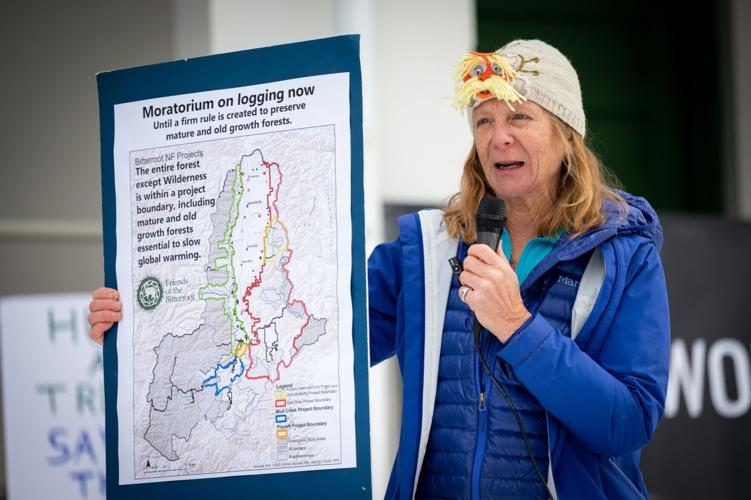 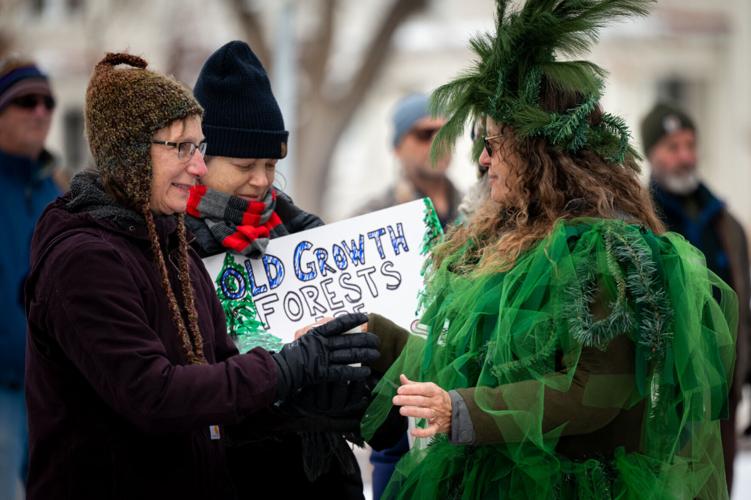 Carla Abrams, left, with 350 Montana, receives a cup of hot chocolate from Mary Alexine of the grassroots group Great Old Broads for Wilderness, as Abrams and others rally outside the U.S. Forest Service offices in Fort Missoula. Some organizers dressed up as trees as they demonstrated for the protection of mature and old-growth trees from being cut down. 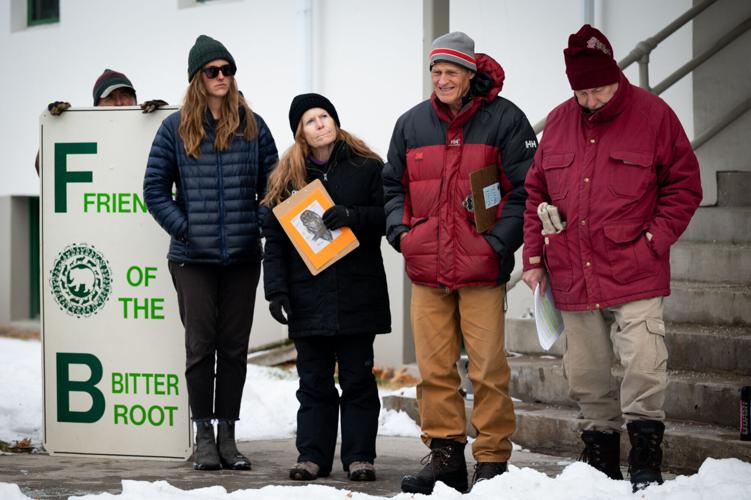 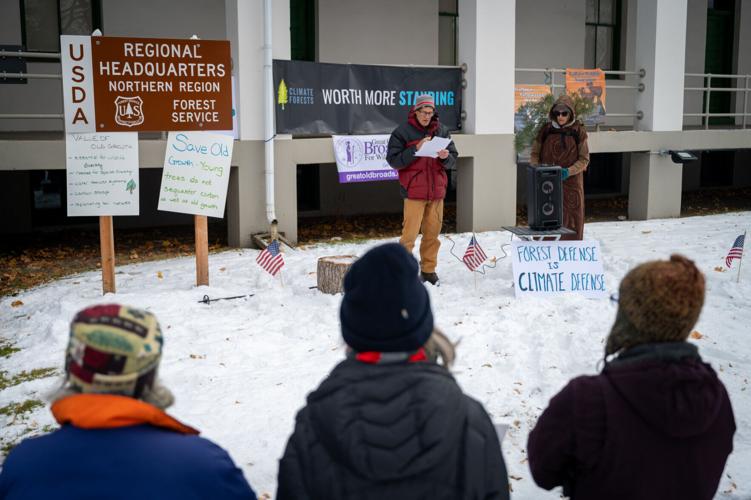 Jeff Juel, Montana policy director for Friends of the Clearwater, addresses supporters at a rally outside the U.S. Forest Service headquarters in Fort Missoula on Monday. With signs, petitions, maps, speeches and hot chocolate, the group demonstrated for an hour in chilly temperatures. 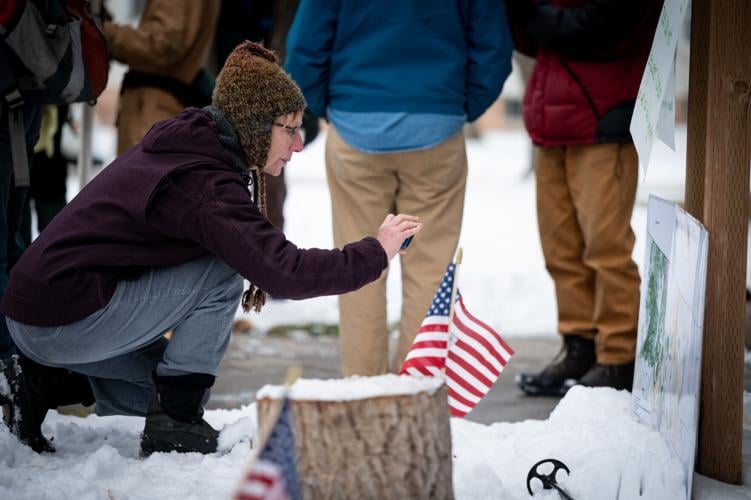 Carla Abrams with 350 Montana snaps photos of a map showing where commercial logging is underway in mature and old-growth forests throughout the state.