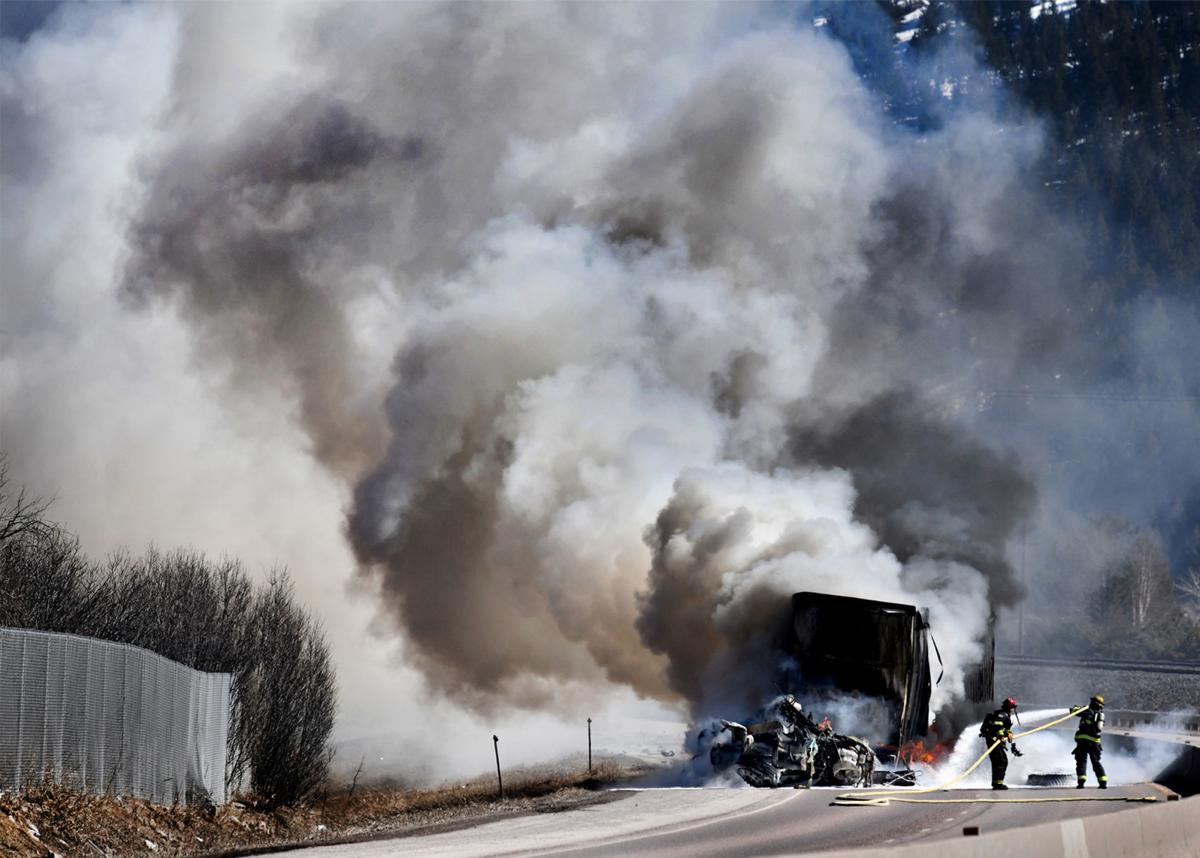 Firefighters spray water on a burning semi-truck on Interstate 90 just east of Missoula, after the truck was involved in a fatal head-on crash with a wrong-way driver traveling east in the westbound lane. The collision caused the cab of the semi-truck to fly off and land in the eastbound lanes. The driver of the car was killed. 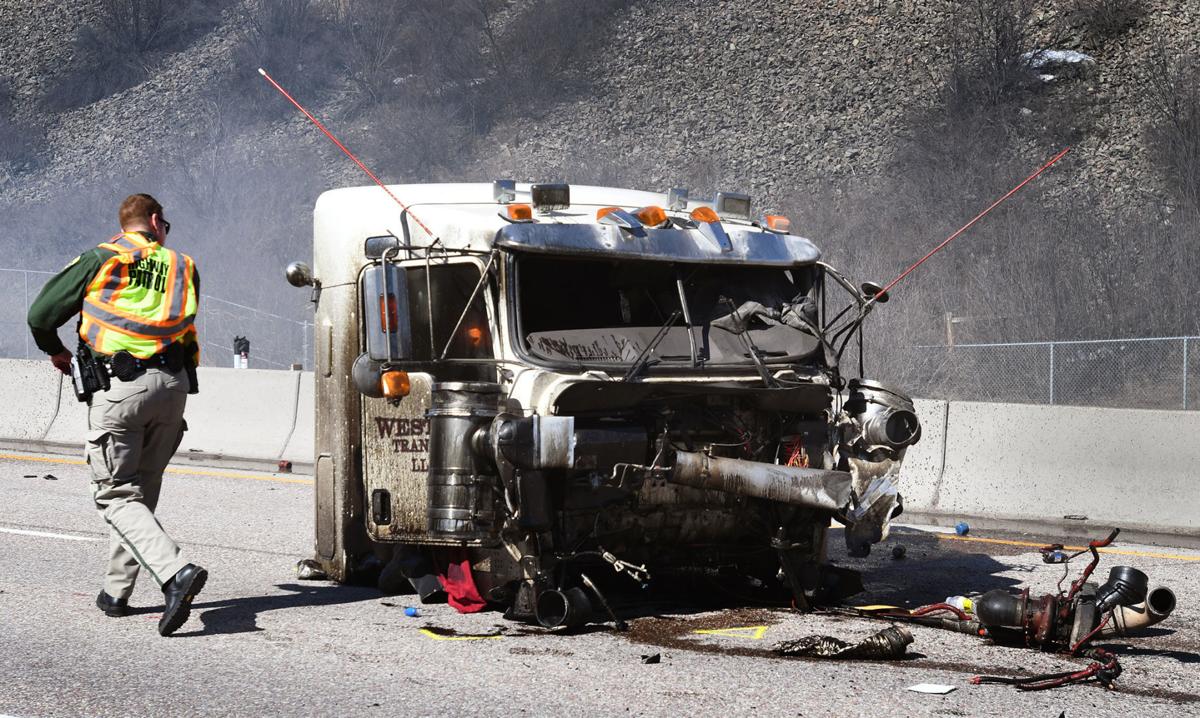 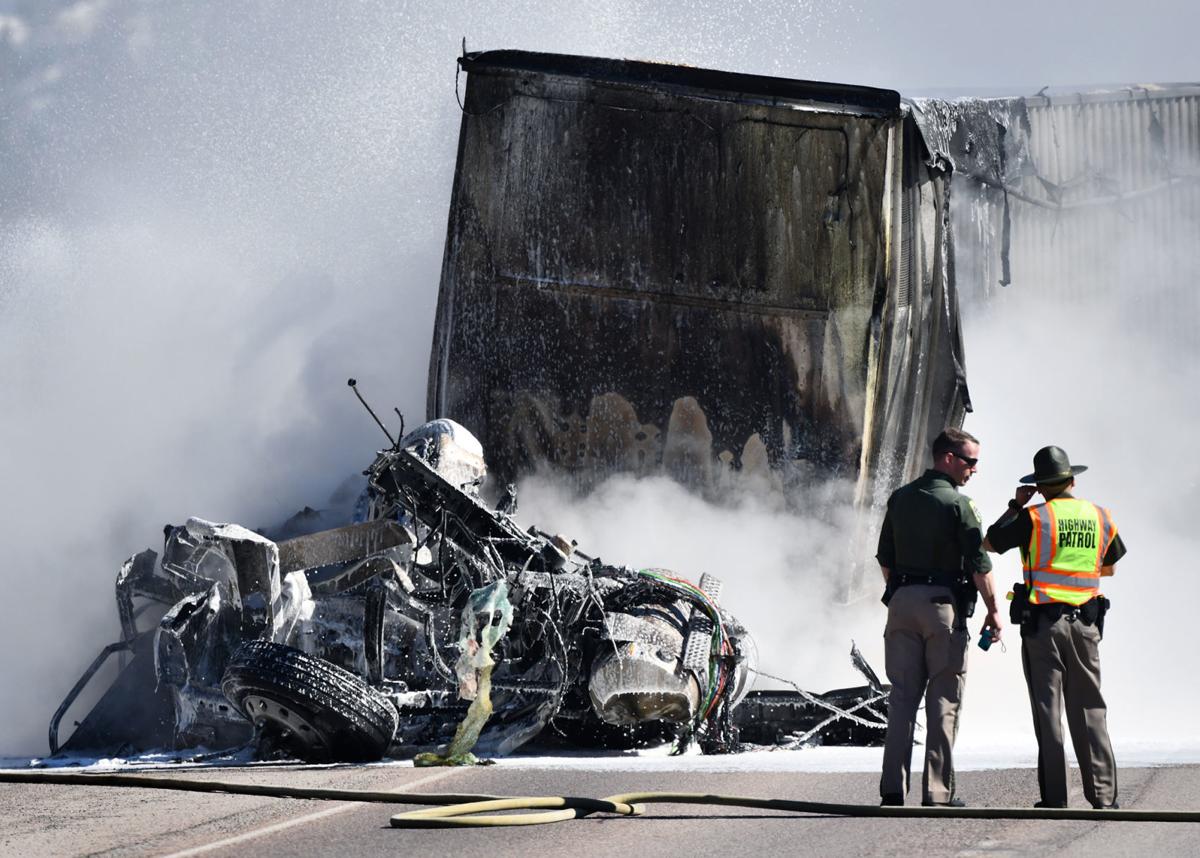 Montana Highway Patrol officers investigating the crash stand near the debris left of the front of the semi-truck.

Firefighters spray water on a burning semi-truck on Interstate 90 just east of Missoula, after the truck was involved in a fatal head-on crash with a wrong-way driver traveling east in the westbound lane. The collision caused the cab of the semi-truck to fly off and land in the eastbound lanes. The driver of the car was killed.

Montana Highway Patrol officers investigating the crash stand near the debris left of the front of the semi-truck.

One person was killed in a head-on collision with a semi-truck carrying wood chips Wednesday afternoon, Montana Highway Patrol said.

A vehicle traveling the wrong way on Interstate 90 struck a semi-trailer on Wednesday afternoon in a crash that closed all lanes of the highway, authorities said.

Kaci Briggeman got on I-90 at the Orange Street exit and was headed east when she saw the vehicle, a black sedan, driving parallel to her from the westbound lane. At first, she said the vehicle appeared to be trying to avoid other drivers.

“They were kind of trying to drive on the shoulder and stay out of the way,” she said. “I just knew that he’s going to hit somebody so I was not going full speed. I didn’t want to be next to that.”

Briggeman said at some point, the driver seemed to change course and began speeding toward oncoming traffic, at one point driving in between two oncoming vehicles through what she called an already-congested roadway. As the driver approached the bend between the Van Buren exit and East Missoula, the semi came around the corner.

“That’s where the semi and him hit straight on and exploded,” Briggeman said. “It was an explosion. Fire. The cab (of the semi) flew off.

“We pulled over when the explosion happened. There was a police officer there so fast. He got out and ran straight for the cab to try and save whoever was in there. They had him out really quick.”

The truck driver was taken away on a stretcher and transported to the hospital.

Like everyone else on the highway, Briggeman was held up in traffic for half an hour or more as emergency crews navigated traffic and blitzed the scene. People got out of their cars to watch firefighters extinguish the burning semi-truck carrying wood chips.

As traffic began rolling again, Briggeman could see the stream of debris from the crash.

“I was surprised with how long the debris went on for,” she said.

Authorities on the scene confirmed the vehicle was traveling east in the westbound lanes when it collided with the semi-trailer traveling westbound in its proper lanes.

The crash closed all four lanes of Interstate 90 between the Van Buren Street exit and East Missoula. Debris from the crash was scattered across all four lanes of the interstate, and the top of the semi's cab ended up in the eastbound lanes.

'One of a kind' Shelley Hays, born and raised Missoulian, remembered as more than a victim

Shelley Hays, a born-and-raised Missoulian, is remembered this week as an ace mechanic who would drop anything to help anyone at any time.