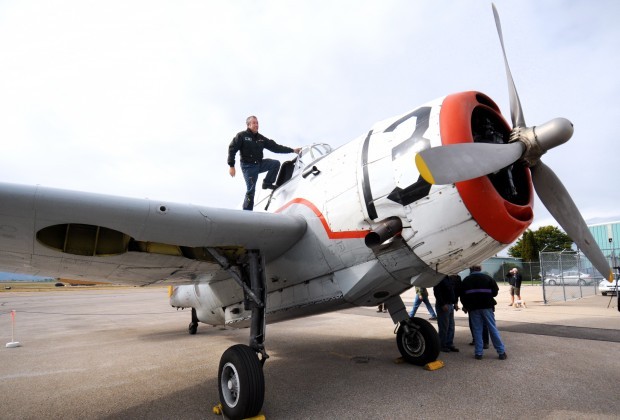 Pilot Larry Ricker steps from the cockpit of a World War II torpedo bomber Monday afternoon at the Museum of Mountain Flying's hangar in Missoula. "I usually fly 767s. This is a little different. Much more fun, of course," said Ricker after his flight from Spearfish, S.D. 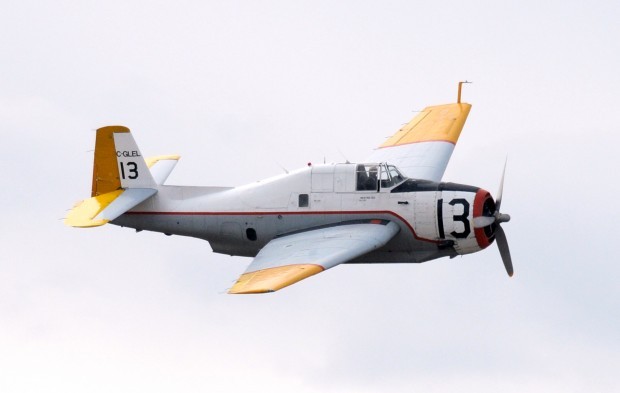 The newest addition to the Museum of Mountain Flying's fleet is powered by a 2,600-cubic-inch, 2,000-horsepower Wright Cyclone engine. 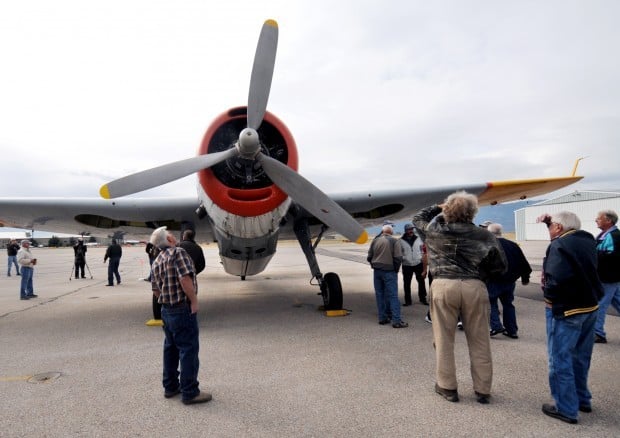 About 60 friends of the museum greeted the plane as it rolled to the door of its new home.

By KIM BRIGGEMAN of the Missoulian

To all but the initiated, the gray horizon above Missoula International Airport loomed empty at high noon Monday.

"Hear that?" Maurice Owen said, as he stepped outside the Museum of Mountain Flying hangar. "Do you hear a rumble out there? That's it."

A minute later, there it was. The proud museum's newest addition, a retrofitted, single-engine World War II torpedo bomber, roared out of the west, 500 feet above the airport.

It's one that pilots like Owen, of Stevensville, and Dick Komberec of Bearmouth flew, and mechanics like Rick Phillips of Boise, Woody Goodan of Seeley Lake, and Everett Reynolds of Missoula got in the air and kept there for Johnson Flying Service in the 1960s and '70s.

They and about 60 others were there for the welcome home of an aircraft that was one of six Grumman TBM Avengers closed out of the Missoula-based flying service in 1974. They were sold to Forest Protection Limited in New Brunswick, and either crashed or, like this one, spent most of the last four decades spraying Canadian forests for bugs and dropping retardant on forest fires.

Larry Ricker, a Boeing 767 captain for Air Canada, left Fredericton, New Brunswick, early Saturday with "A-13." Radio troubles grounded him from his expected departure Friday, so Ricker made his way west in 2 1/2 days, with overnight stops in the Chicago area and Spearfish, S.D.

Monday's leg included a brief stop in Billings to refuel.

Cameras clicked and a few eyeglass lenses fogged as Ricker taxied up to the hangar with a loud rumble. A-13 first came to Johnson's in 1964 as a replacement slurry bomber after its predecessor crashed near Lost Trail Pass and killed pilot Hardy Sandvig.

"Welcome!" someone from the crowd shouted as Ricker shut the engine down.

"I am in the right place, aren't I?" Ricker said with a grin.

The flight of 16 air hours was a dream, albeit a loud one, the pilot said a few minutes later. Ricker dubbed A-13 the best TBM he'd ever flown.

"This might sound funny, but I had the impression that the airplane was real anxious to get back home," Ricker said.

Phillips immediately walked under the left wing, reached up to the wheel well and seemed to peer inside.

Phillips grew up in Missoula and started working for Johnson Flying Service washing planes at age 19 in 1969. By 1973, he was crew chief when the six TBMs went spraying in Maine. He's retired now from a 30-year career with Boise Cascade, working on logging helicopters and corporate jets. He got a call Sunday morning at his home in Boise that the TBM would be landing Monday morning and jumped in the car to be here.

"This is huge," he said. "I built a big shop at my house because my ultimate goal was to end up with one of these six (Johnson TBMs)."

Missoula's will probably be as close as Phillips gets to having one, but that's fine with him. He and his sister, Sharon Phillips Gallagher, grew up in a home on a bench above the mouth of Grant Creek, watching, listening and dreaming as the TBMs and other aircraft took off and landed.

"This isn't just a museum thing," Phillips said. "This is a Missoula thing. There's aviation history here. This is bigger than just an airplane coming home."

Sharon moved back to Missoula four years ago after spending more than 20 years in Washington, Arizona and California as an airplane mechanic and then flight safety inspector.

"They need to fly this around the valley about four times a year, and they need to tell people when they're going to do it," she said.

The plane, in fact, won't be a static museum piece if the board can drum up some sponsorships, said Komberec, who co-founded the Museum of Mountain Flying in 1995 with Stan Cohen.

They've had lots of help getting it here in the first place, he said. Conoco Phillips and City Service Valcon of Kalispell donated $2,500 apiece toward the $9,000 of fuel it took to fly it from New Brunswick. The undisclosed purchase price was covered with a gift to the museum made by Steve Porter, a pilot who lives in Ennis part time.

"I think it's great what they're doing here," said Ricker. "This is going to be a flying aircraft, and that's what airplanes are made to do is fly."

The immediate challenge is to find a place to park the 41-foot-long craft inside the museum hangar for the winter. A dozen or so aircraft are tucked in there now.

"We're either going to have to get rid of some or hang some from the beams," Cohen said. "We don't know quite yet."

To those who knew and flew the TBMs, the sound of it in operation is what makes it special.

"I couldn't believe they would pay you for having so much fun," said Reynolds, who was a mechanic at Johnson's from 1969-75 after returning from Vietnam. "My fondest memory is firing these things up in the spring, sitting in the cockpit and running them up.

Owen said the first time he flew a Johnson TBM he'd borrowed a helmet from legendary mountain pilot Ken Roth, a charter member of the Montana Aviation Hall of Fame.

"He had a big head," Owen said. "So did I, but the helmet was too big. I got on the ground after flying that TBM an hour and I couldn't hear a thing. It was just ringing, ringing. Boy, I rustled up a helmet pretty damn fast."

When Ricker stepped down Monday from the A-13, he was asked how his hearing was.

"Pardon me?" he quipped, then added, "It's good. I have a good helmet. But if I flew these things a lot, then I may have some issues with that, that's for sure."

Historic craft to land in Hamilton for Airport Heritage Days

HAMILTON – The Staggerwing Beech was considered the Learjet of its day.

Pilot Larry Ricker steps from the cockpit of a World War II torpedo bomber Monday afternoon at the Museum of Mountain Flying's hangar in Missoula. "I usually fly 767s. This is a little different. Much more fun, of course," said Ricker after his flight from Spearfish, S.D.

The newest addition to the Museum of Mountain Flying's fleet is powered by a 2,600-cubic-inch, 2,000-horsepower Wright Cyclone engine.

About 60 friends of the museum greeted the plane as it rolled to the door of its new home.