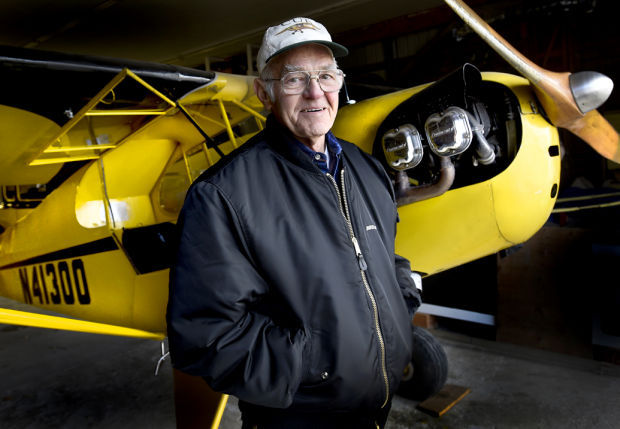 Eighty-year-old pilot Chuck Burruss stands near his 1941 Piper J-3 Cub that once belonged to Johnson Flying Service in Missoula, where it was used to train would-be pilots in the Army Air Force College Training Detachment. The flight training was done at the old Hale Field, near where Sentinel High School is now. 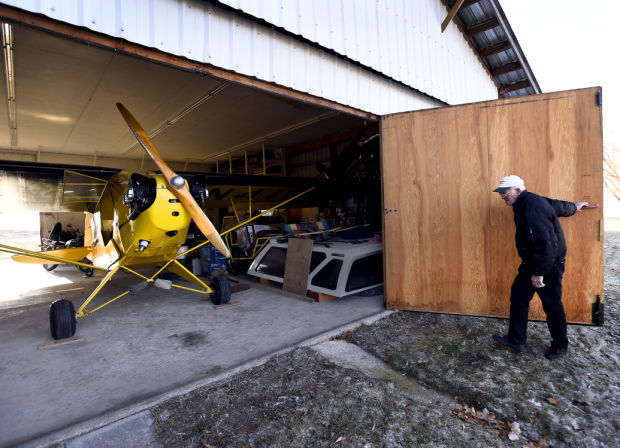 Burruss pulls a door closed at his home airfield where he keeps the Piper Cub and a Cessna 180 he flies. The Piper will soon join other former Johnson Flying Service planes on display at the Museum of Mountain Flying in Missoula. 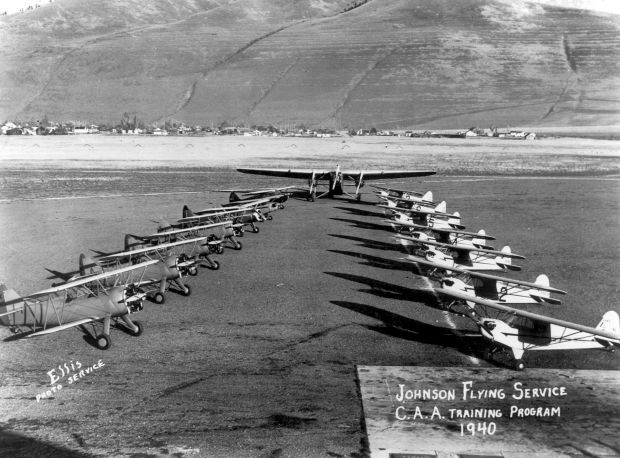 They arrived in Missoula in the middle of World War II, young men who would be pilots in the little-known Army Air Force College Training Detachment.

From March 1943 until a few weeks after D-Day in 1944 they bunked in Corbin Hall and other dorms on what was then the Montana State University campus in Missoula.

They studied math, physics, geography and physical education. They staged hops and musical extravaganzas, played intramural sports and, over at Hale Field, learned the rudiments of flying from Johnson Flying Service pilots.

Hundreds if not thousands cut their teeth in two-seat “cub yellow” Piper J-3’s, the primary aircraft of the Civilian Pilot Training Program and, later, Army Air Force programs that came to campuses and airfields in Montana and across the country.

“It’s as easy a plane to fly as you could ever learn in. They’re very good trainers, real forgiving, and they recover from a stall easy,” Burruss said the other day as he pushed open the doors to the hangar at his home northeast of Corvallis.

It won’t be here much longer.

As early as this week, the Piper Cub will join its brethren from the Johnson Flying fleet in the Museum of Mountain Flying at Missoula International Airport. Some of the others are on loan, but the museum, of which Burruss is a member, has long sought the J-3 for its own.

Thanks to generous donations and a grant, the board recently met the asking price of $15,000.

“The whole thing about buying this airplane is it was a Johnson plane. It came from Missoula. It’s historic, sort of an original J-3,” said museum board president Stan Cohen, who doggedly led efforts to obtain the plane.

It fits with the 20-year-old museum’s mission of collecting and displaying historic planes used by Johnson Flying Service since it was launched in 1926.

For now, the J-3 will fit under the wings of the hulking DC-3, the plane that transported smokejumpers to tragic deaths in the 1949 Mann Gulch fire north of Helena.

Cohen said a similar yellow Piper Cub that wasn’t a Johnson training plane will be returned to nearby Minuteman Aviation to make room.

Along with Burruss’ J-3 comes a scattering of log books and records, including the original forms completed when the plane came off the assembly line at the Piper Aircraft Corp. in Lock Haven, Pennsylvania.

It’s dated Dec. 4, 1941 – three days before the Japanese attack on Pearl Harbor that plunged the United States into war.

Burruss had just turned 7 on that day and would soon become infatuated with the doings at the airport in his hometown of Hamilton.

Bernie Wryn was 5, and in only a couple of years would share a similar fascination with what was going on at Hale Field in Missoula, on the eastern edge of the Missoula County Fairgrounds.

“I’d pedal out there with my bicycle and you could see all these J-3s standing on their noses, one stacked right after another in a hangar,” said Wryn.

Also a member of the flying museum, Wryn has long assumed Burruss’ J-3 was one of the planes he saw at Hale Field during and after the war years. He can’t remember how many Piper J-3 Cubs the military used for pilot training there and sold to Bob Johnson for $1 apiece plus “other valuable considerations.”

“I’m going to say I saw certainly a half-dozen and maybe a dozen,” Wryn said.

Where N41300 flew between the time it came out of the factory in late 1941 and when it joined the Army Air Force’s fleet at Hale Field remains a riddle that Dick Komberec aims to solve.

A historian for the flying museum, Komberec said there’s a decent chance it arrived in the wake of tragedy.

“They would have needed two replacement airplanes, or at least one,” Komberec pointed out. “They lost two that day and still had the program. I’m just guessing that’s maybe where this one came in.”

He plans on making a request for Federal Aviation Administration records that will detail the history of Burruss’ plane.

The 317th was apparently the first of two college training detachments in Missoula, activated in March of 1943 under the Army Air Force’s Western Training Center. Cohen's collection at Pictorial Histories Publishing includes an invitation to the 317th's Farewell Hop on Feb. 18, 1944.

The detachment was replaced by the 3074th Base Unit, which trained and schooled at the university and at Hale Field until the nationwide program was discontinued at the end of June 1944.

Burruss can trace his plane’s history after the war. Bob Schellinger, a legendary helicopter pilot for Johnson Flying Service and a charter inductee into the Museum of Mountain Flying’s hall of fame in 1995, bought it from Johnson. Then it belonged to Don Dowling, of the Dowling funeral home family in Hamilton.

“It needed fixing, so I bought it, re-covered the wings, and learned to fly in it,” he said. “I didn’t know how to fly when I bought it.”

He courted his future wife, Jeanne Clark of Corvallis, in the Piper Cub.

How do you do something like that? Burruss was asked.

“You meet her up behind C Butte (east of Corvallis) up in the grainfields. She leaves her horse in the corral and she jumps in the plane and goes flying with you,” he said with a grin.

Aside from the initial re-covering of the wings and some chrome work when American Dental was in business in Missoula, Burruss hasn’t altered anything since he got N41300, he said.

He’s added a Cessna 180 to his stable, but until recently he flew the Piper Cub several times a year, taxiing it out of the barn and taking off and landing on his 1,000-foot grass runway that slopes down from the house, at one point at a 9-percent grade.

With all those takeoffs and landings, and all those hours in the air – into the Selway, up to the Flathead, over to Butte and Dillon – he never had an accident or even a close call, Burruss said.

But now it’s time to get rid of the old plane. Burruss turned 80 in November.

“I’ve been playing around with it for years, but the fabric is old,” he said. “It needs re-covering. It shouldn’t be flown any more because of that, and I’m getting too old to re-cover an airplane again.”

The originally designed and used DC-3 was retired in 1990. The Missoulian article (Feb. 21) included pictures of a BT-67 rather than a DC-3.

You wonder after all these years what was going through 22-year-old Don Tomlinson’s mind on Sept. 14, 1942, as he climbed into the one-seat co…

Downed pilot was doing what he loved

Mark Melotz was a trucker with a passion for flying.

A deep downsizing: Stan Cohen stepping back from the book publishing life

Stan Cohen looked at the last pallet of books in his warehouse last week and sighed.

Eighty-year-old pilot Chuck Burruss stands near his 1941 Piper J-3 Cub that once belonged to Johnson Flying Service in Missoula, where it was used to train would-be pilots in the Army Air Force College Training Detachment. The flight training was done at the old Hale Field, near where Sentinel High School is now.

Burruss pulls a door closed at his home airfield where he keeps the Piper Cub and a Cessna 180 he flies. The Piper will soon join other former Johnson Flying Service planes on display at the Museum of Mountain Flying in Missoula.