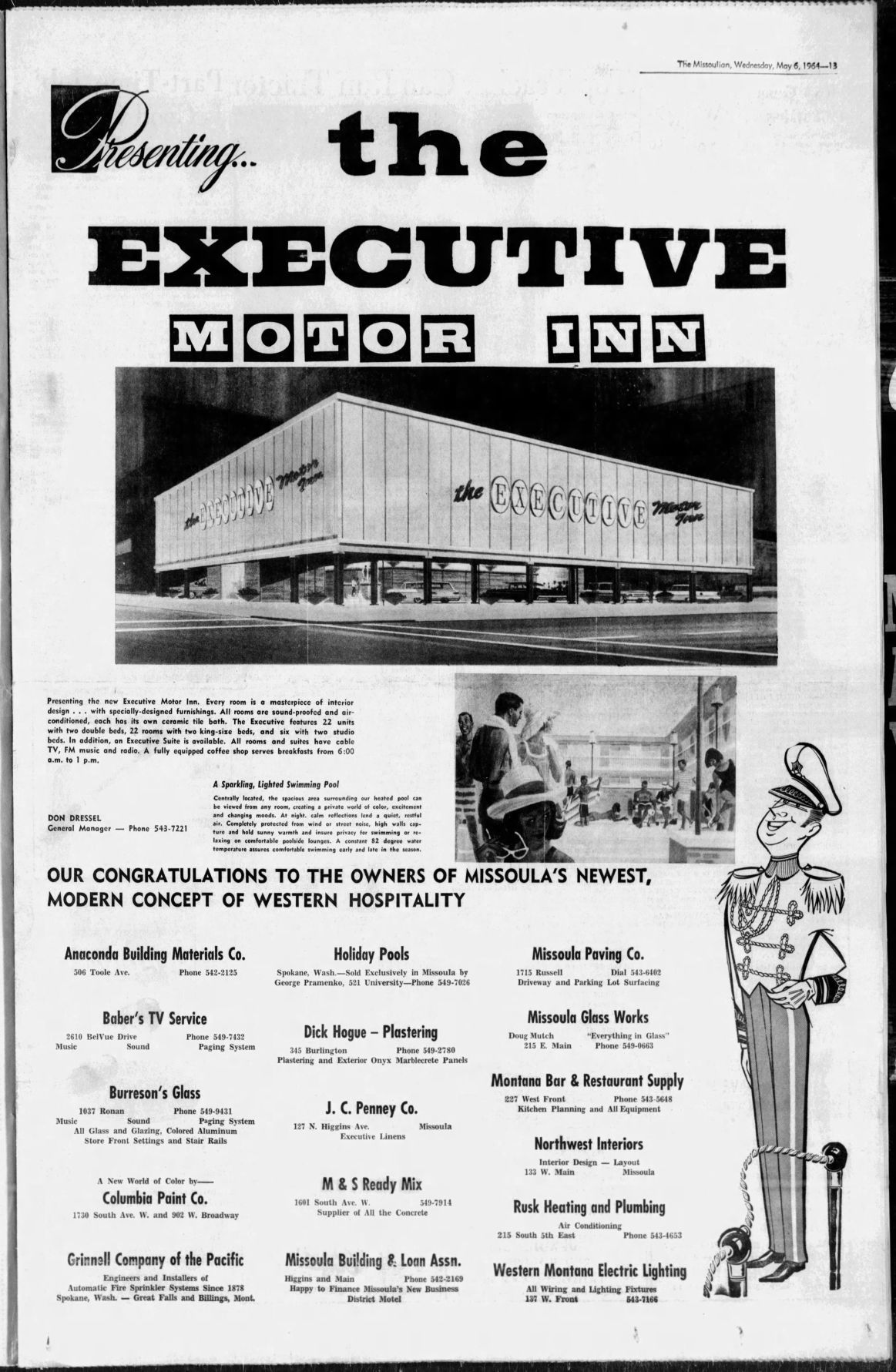 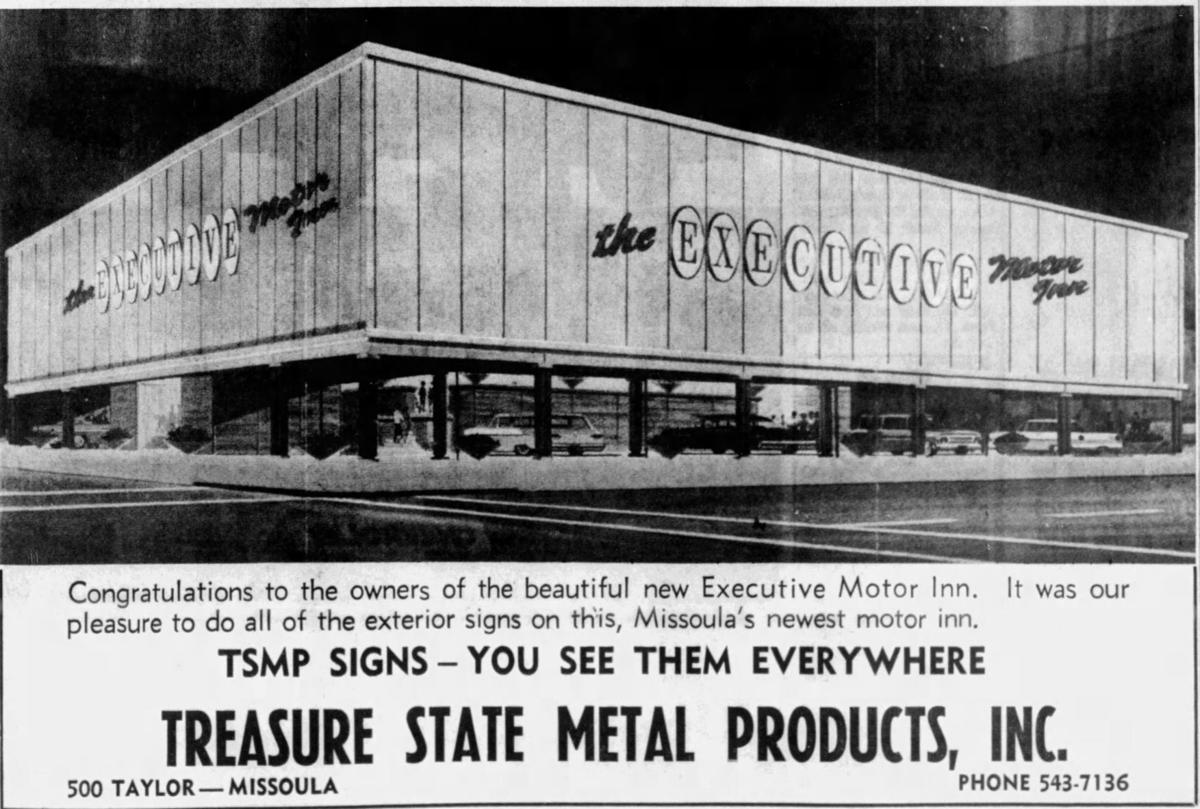 To be sure, the old Executive Motor Inn has outlived its usefulness.

Plans to overhaul the funky motel at 201 E. Main Street adjacent to the Elks Lodge were announced earlier this month. A Bozeman development group has proposed an $8.7 million “adaptive reuse” of what most recently was a Days Inn into a new hotel called The Wren.

The design marked by concrete pillars and rooms facing into the interior courtyard and guest parking lot is “inappropriate in an urban setting.”

Mike Lewis was the most highly touted basketball star to play for the Missoula County High Spartans. When it came time to announce his choice of colleges in May 1964, a press conference was called at the Executive Motor Inn barely two weeks after it opened its doors at the site of the old Liberty Theater.

No one said it in public, but the Executive challenged the time-honored Missoula tradition of holding those kinds of things at the venerable Hotel Florence, a block away on Higgins Avenue.

“Lewis, who drew ‘feelers’ from an estimated 80 colleges and universities throughout the United States for his basketball services, met with newsmen in the presence of Duke assistant coach Bucky Waters,” reported Don Zupan in the Missoulian on Friday, May 15, 1964.

The 6-foot-7, 220-pound Lewis was coming off a senior prep season for Lou Rocheleau’s “Super Spartans” in which he averaged 28.5 points per game in leading Missoula to the Big 30 championship. He was headed for a star-studded college career for Vic Bubas’ Blue Devils that included an appearance in the Final Four his sophomore year and third-team all-America honors as a senior in 1968.

Lewis went on to average a double-double (points-rebounds) in a six-season career with four teams in the American Basketball Association.

“Our congratulations to the owners of Missoula’s newest, modern concept of western hospitality,” read a full-page ad on May 6, 1964.

“Every room is a masterpiece of interior design, with specially designed furnishings,” the ad proclaimed. “All rooms are sound-proofed and air-conditioned, each has its own ceramic tile bath.”

Each of the 51 rooms had cable TV and FM radio.

Then there was the “sparkling, lighted swimming pool,” with a constant water temperature of 82 degrees to assure “comfortable swimming early and late in the season.”

“Centrally located, the spacious area surrounding our heated pool can be viewed from any room, creating a private world of color, excitement and changing moods,” the ad plugged. “At night, calm reflections lend a quiet, restful air. Completely protected from wind or street noise, high walls capture and hold sunny warmth and insure privacy for swimming or relaxing on comfortable poolside lounges.”

Within a week, general manager Don Dressel and a Mr. Weiser were running classified advertisements seeking a manager of an Americana Encyclopedia office in the motel, and for three high school seniors or college students to be trained in the motel business for $1,000 per month and up during the summer months.

“The best can stay with us on a career basis,” the latter promised.

In September 1965 a slack-jawed 9-year-old kid watched with his brother and dad as Bill Russell, John Havlicek, Coach Red Auerbach and the rest of the National Basketball Association champion Boston Celtics emerged from their second-floor rooms at the Executive Motor Inn. They were headed that Sunday afternoon to the University of Montana Field House for a workout before their Monday exhibition against Jerry West, Gail Goodrich and the Los Angeles Lakers.

The game was inconsequential. Russell and Lakers sharpshooter Elgin Baylor played but a few minutes each and Los Angeles won 120-98. But it and the hotel that housed them took on more significance when the Celtics and Lakers met up again for the NBA championship the following April, Boston winning four games to one for its seventh straight title.

Through the latter decades of the 20th century, the Executive Motor Inn (later the Best Western Executive Inn) rarely made the news. It provided meeting space for Parents Without Partners, free electronic hearing tests, Hong Kong Custom Tailors fittings, the Missoula Business and Professional Women, and a couple of Missoula Science Fiction and Fantasy conventions.

It's off-Higgins location downtown made it an attraction for armed robberies — at least two in the 1970s and a couple more in the ‘80s. In 1987, the Executive was a link of a chain of robberies that resulted in arrests and convictions of two men.

Back in 1966 there was no word on the apprehension of a buck-toothed robber who twice made off with $250 from night clerk Bob Cozad.

The Missoulian’s Lyle Harris talked to Cozad following the second one in December.

"I recognized him the minute he walked in the door," Cozad said. "He recognized me, too, and immediately pulled the gun.”

Buchanan of the Missoula Redevelopment Agency told Erickson this month that the old Executive is "basically a floating bunker."

“It does nothing to engage the street or enhance the pedestrian experience,” she said.

In January 1964, four months before the Missoula’s newest, modern concept of western hospitality opened on a corner of East Main and Pattee streets, Columbia Records released Bob Dylan’s third studio album. Its title track: “The Times They Are A-Changin’."

More in Missoula Rewound: A look at Missoula history through the Missoulian archives (7 of 53)

Each week we dive into the archives of missoulian.newspapers.com to comb out stories for Missoula Rewound.

A dilapidated, vacant former hotel building with almost no windows in downtown Missoula is slated for an $8.7 million overhaul.

A 100-year march to an oompha beat