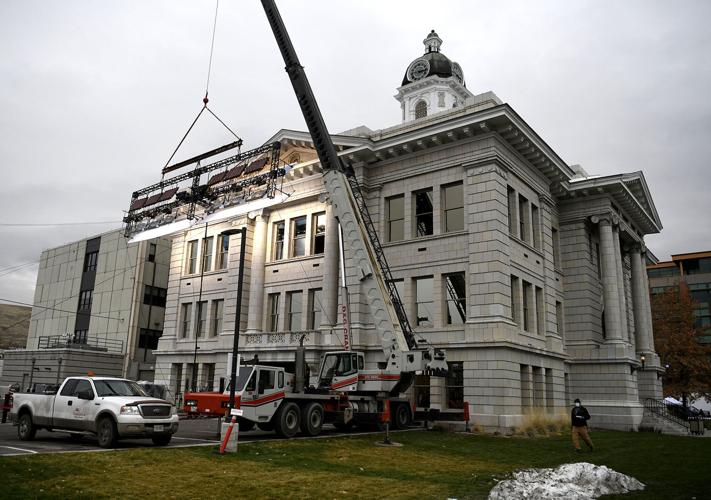 Banks of lights hang from a crane outside the windows of the third-story courtroom of the Missoula County Courthouse as the television show "Yellowstone" filmed inside last fall. 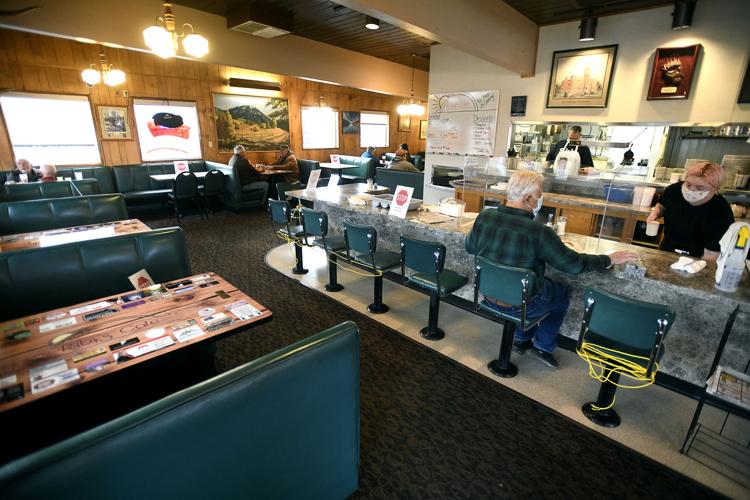 Ruby's Cafe in Missoula was used by the "Yellowstone" production for an entire day while filming.

There will be many scenes in the upcoming fourth season of Paramount Network's hit television fictional drama “Yellowstone” that won’t look like fiction to Missoulians.

The show, starring Kevin Costner, has been filmed here and in the Bitterroot Valley for the last several months. If you’re a regular at the classic Ruby’s Cafe in Missoula, you’ll probably notice an odd detail in a window-smashing scene when the show airs. A scene was filmed at Community Medical Center, and the Missoula County Courthouse will be featured.

But behind the scenes, the economic impact of a well-funded Hollywood production coming here has been sizeable, as local small businesses and workers take advantage of a studio payroll.

According to the Salt Lake Tribune, Paramount Network spent roughly $80 million filming the first three seasons of “Yellowstone” in Utah. That translates to over $26 million a season.

This year, Paramount decided to move filming to Montana to take advantage of a new $10 million tax credit law passed by the Montana Legislature that was deemed more attractive than Utah’s incentives.

And that has meant a lot to local businesses and workers.

Brenda Hallas owns Ruby’s Cafe in Missoula, a classic diner that's been open for nearly half a century.

“A couple months ago some people scouting for the show were in here and asking me ‘do you mind if we take pictures’ and looking around,” Hallas recalled. “They came in later and said, ‘you’re our No. 1 choice’ and asked me if we’d be interested. We have this look that nobody else has anymore.”

The show filmed for an entire day, from 6 a.m. until almost 9 p.m., in October at the diner. They then hired a local cleaning crew to scour the whole restaurant and remove all the fake blood the next day.

“I do have to say they were incredible to work with,” Hallas said. “I cannot tell you a negative. Of course, I never met the cast, I only dealt with the crew. And the crew I dealt with was absolutely wonderful. They were so professional. They were just Johnny-on-the-spot with immediate responses.”

She said everyone from the electricians to lighting professionals were “wonderful to deal with.”

“And then they hired local people to clean,” she said. “The cleaners were here for seven and a half hours, cleaning head-to-toe. They made a mess filming, to be honest with you, but it wasn’t something that was ‘oh my gosh.’ They made it right.”

Hallas said she didn’t get an “exorbitant” amount for allowing the filming to take place.

None of her staff were used as extras because she said extras had to quarantine first. Hallas said many of her regular customers stood outside on the sidewalk and watched the filming.

“The people behind the scenes, the crew, they work their butts off,” she said. The company would go in and “fog” the restaurant with a cleaning solution between some shots, as well.

“It was spotless when they left,” she said.

Cortney Bergeson, a project manager with TC Glass in Missoula, said their company was hired to replace the tinted-glass in the restaurant with clear glass for filming action shots.

“We put in tempered glass and they broke it out three times,” she said. “They pulled a guy through a window facing Brooks. We’d run up and replace it every time they broke it out. It was really cool.”

The next day, the company went and put all the old windows back in.

“There was fake blood all over the other ones,” she said. “It was fun to see all that. The whole crew was really awesome. We got to talk to all the actors. Everyone was really friendly. It was the perfect opportunity.”

The production company rented a warehouse in Bonner for use as a sound stage, and many other businesses have reaped the benefits from the show as well.

Missoula city police officers were hired several times by the show for security purposes. The total off-duty overtime hours paid by the company amounted to 285, for a total reimbursement of $17,081, according to city communications manager Ginny Merriam. That money doesn’t come from taxpayers, because the hired cops are off-duty.

The show spent $130 on getting public right-of-way closures in the city, and also paid the city $7,870 for blocking off parking spots when they shot several scenes downtown.

Missoula County facilities director Jason Hauser said the company paid $16,000 to use the Missoula County Courthouse on a Saturday and another evening.

“They were very good to work with,” Hauser said. “There were only a few minor things damaged, and they paid for repairs. They didn’t impede public access at all.”

The show may be set in the Bozeman area, but it will be Missoulians excitedly pointing at themselves on their screens next year. Hundreds of locals have made around $180 a day as extras.

City council member Jesse Ramos spent a day filming a scene with Kevin Costner and a couple other actors. Ramos said it was an "awesome" experience, but he's especially excited for the economic benefit to local small businesses. He's said he's heard local restaurants, bars, hotels and myriad other businesses have been boosted.

"It has brought a nice revenue boon at a time when it was most needed," he said. "I'm excited for them to be back next year."

The director of the Missoula Redevelopment Agency said Thursday she's excited about a possible $20 million project in the Northside neighborhood that would include permanently affordable housing.

The old Days Inn will transform into The Wren: “The old building was, for lack of a better word, such a turd,” said a member of the Design Review Board. “This is so much better.”

Hallie Jo Gaddy, 15, and her mom, Robyn Gaddy, were out hiking when they got the idea to set up a mobile library for local senior citizens during the COVID-19 pandemic.

Mark Thane: A conversation with one of Missoula's new state lawmakers

"It's really critical for health insurance to not always be tied to employment, because when unemployment spikes there needs to be a vehicle to continue to get health services."

Firehouse Subs is coming to North Reserve Street in Missoula, the new Old Post is hiring, and workforce recovery grants are available to small businesses.

“We’re exhausted and running out of money. We wonder how we’ll pay the rent and how our employees will make ends meet if we close," said one Missoula coffee shop owner.

Chef John Ritner and his brother Ben have created shelf-stable, freeze-dried backpacker meals that weigh less than 5 ounces and have much more protein than store-bought brands.

One gun and ammo store owner said the demand has been "absolutely insane." FBI has conducted nearly 40,000 more firearm background checks this year in Montana compared to 2019.

One member of the Confederated Salish and Kootenai Tribes said his Ronan restaurant has lost two-thirds of its revenue and had to lay off four servers.

City Club Missoula: Major TV shows could be filmed in western Montana in 2021

It's possible that a show called "1883" will be filmed in Montana. It's going to be a prequel to Paramount's hit series "Yellowstone" featuring Kevin Costner.

The positions are paid and shooting runs from May through December in Darby, Hamilton and Missoula.

Banks of lights hang from a crane outside the windows of the third-story courtroom of the Missoula County Courthouse as the television show "Yellowstone" filmed inside last fall.

Ruby's Cafe in Missoula was used by the "Yellowstone" production for an entire day while filming.