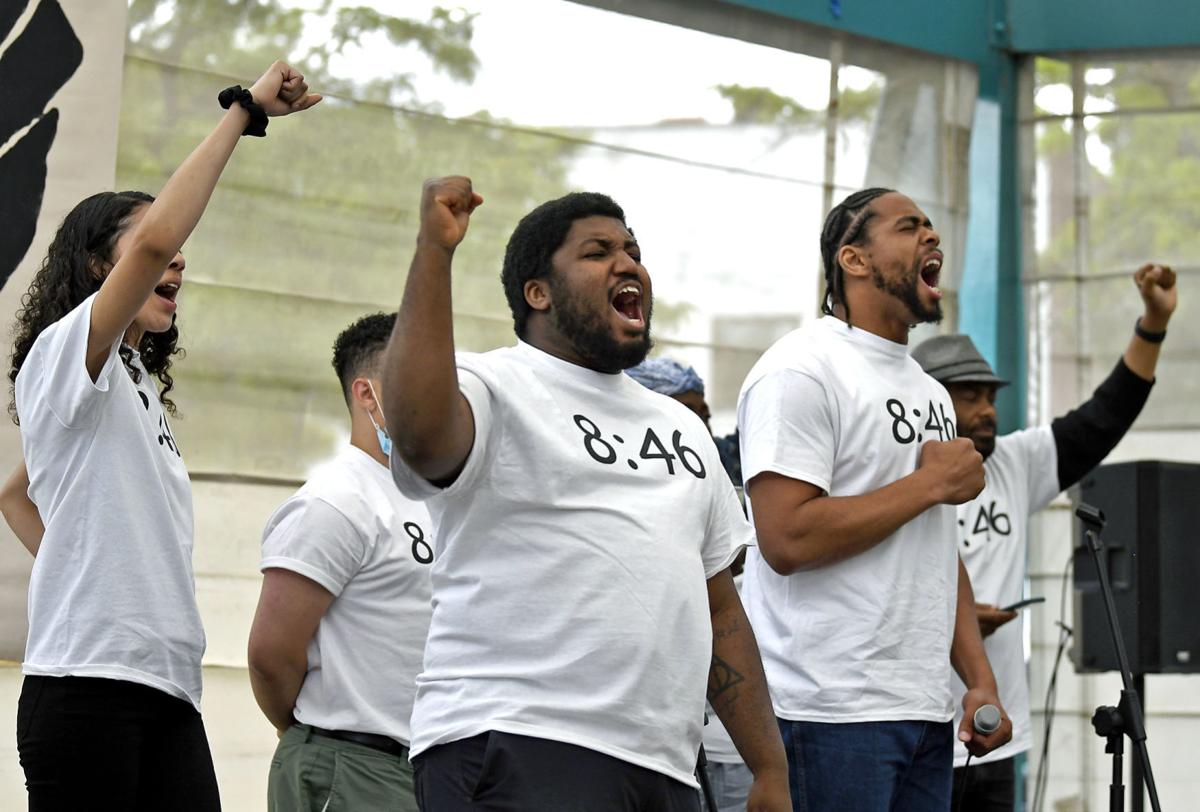 London Marq, center, Ja'Ton Simpson, right, and others lead the crowd in a chant at a Black Lives Matter rally in Caras Park on Sunday. Several hundred people gathered to listen to speakers talk about racism and ending inequality. 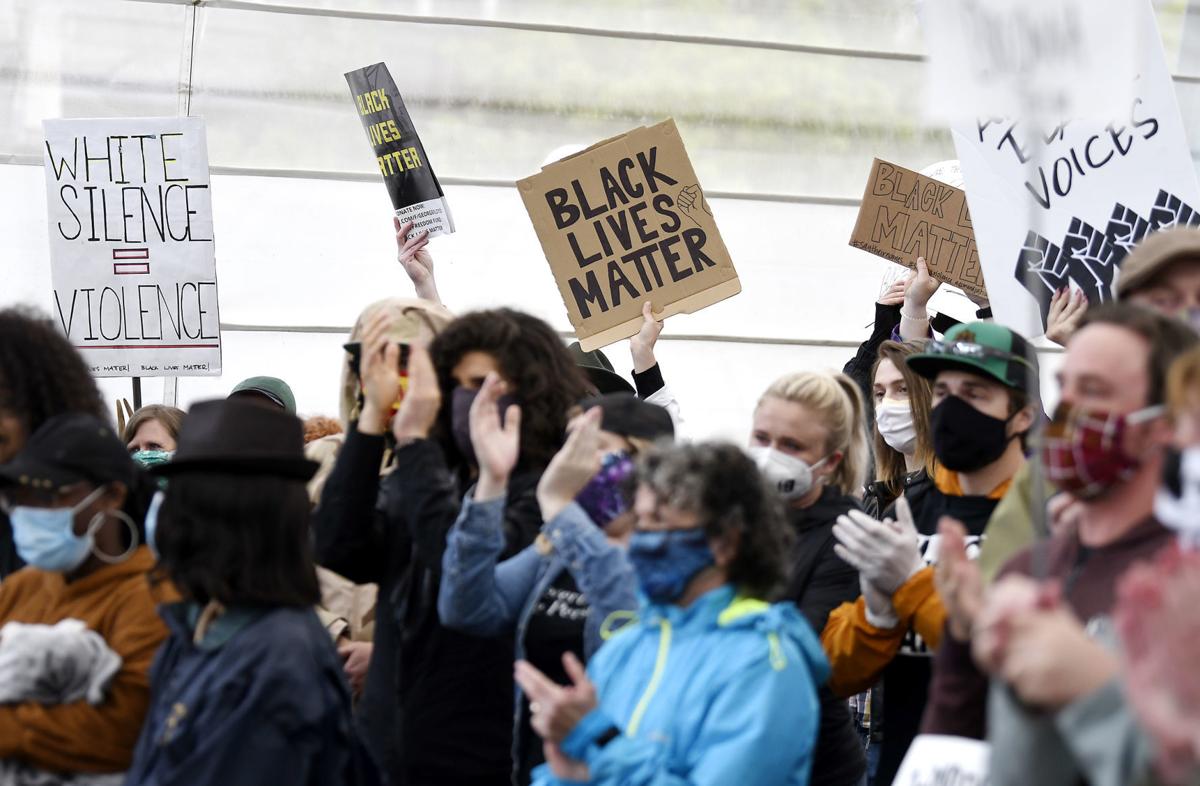 People attending the rally applaud for one of the speakers. The crowd filled the covered pavilion and spilled out into the park. 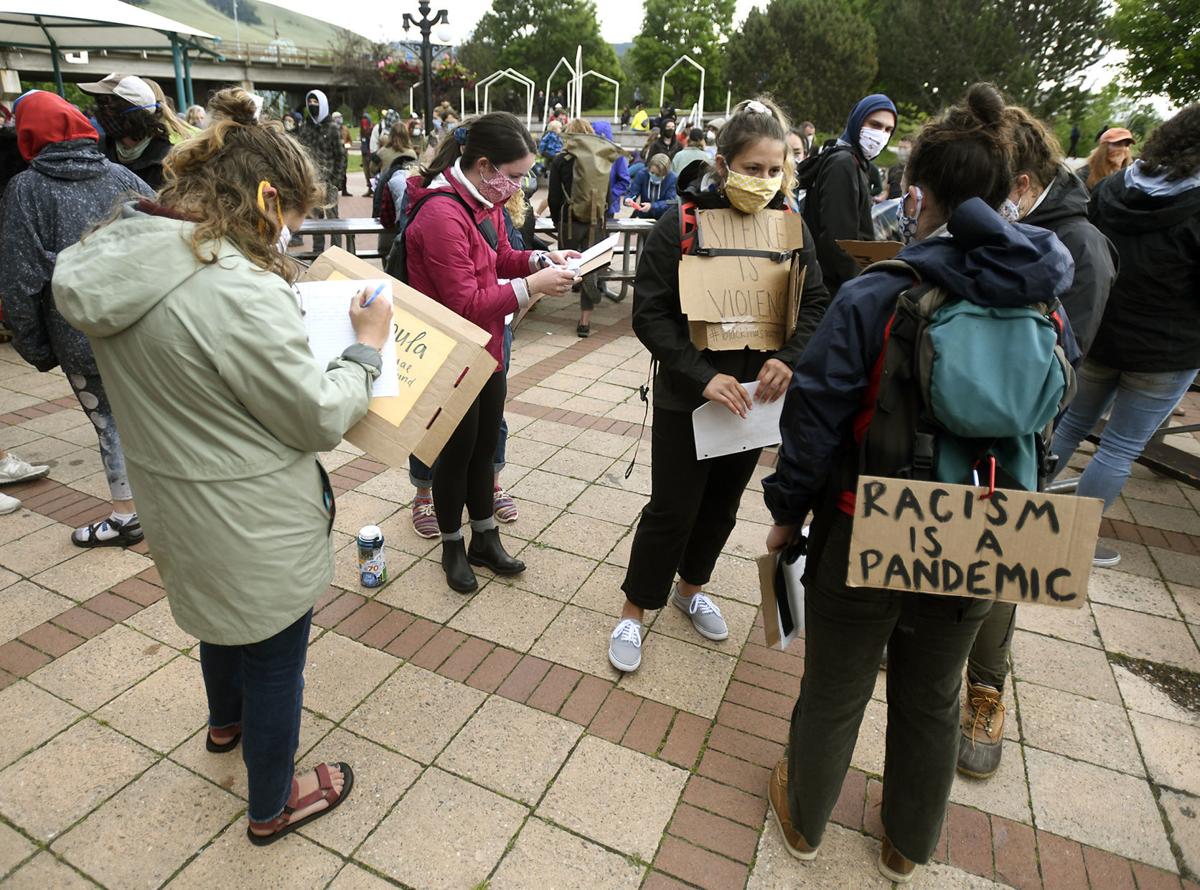 People attending the event were encouraged to write letters to the mayor in support of the Black Lives Matter movement.

Now is the time to make Missoula a safe, equitable and welcoming community for black people, indigenous people and people of color, but it's going to take action and accountability. That was the message from the organizers of a Black Lives Matter rally held Sunday afternoon in Caras Park.

"We want our community to commit to dismantling white supremacy in all of the ways it shows up," said Meshayla Cox. "We want freedom from all forms of organized violence, whether that’s from the police, from white vigilantism or from an unjust criminal system."

Cox is the outreach coordinator for the Montana Racial Equity Project, the only black-led nonprofit in the state, and she was one of several speakers.

Hundreds of people, almost all of them wearing masks, showed up despite rainy weather to show their support at the rally, which was carried out peacefully and without disruption.

"We are working for a fair and equitable society," Cox said. "The reason why we fight is for a vision of ourselves, each other and our communities where black, indigenous and people of color are free. The visioning can continue to ground us in how we treat each other in our meetings, how we listen and how we informally check in throughout this process of anti-racism and dismantling white supremacy."

Cox said her ancestors fought for her to be up on the stage with a "sea of white people" in front of her.

"We imagine a Missoula in which all people are free," she said. "That is why we are here today. We're not here to punch Nazis. We're not here for none of that nonsense. That is what we are fighting for: a free Missoula and a free Montana and a free nation for black, indigenous people of color, LGTB-plus, all of it."

Cox said "armed white vigilante groups have no place as self-appointed protection in our cities and our communities." People bearing military-style weapons have attended the daily rallies in Missoula that followed the death of George Floyd after a Minneapolis police officer knelt on his neck for 8 minutes and 46 seconds. (Rally speakers wore T-shirts emblazoned with 8:46.) Some of those with guns staged counter-protests; others styled themselves as protectors of the protesters.

"Black Lives Matter protesters do not accept protection from vigilante militia groups," she said. "Especially those with a history of white supremacy. The Black Lives Matter movement is about police accountability for killing and oppressing black lives. Vigilantes are even less accountable than the police."

She said the KKK was a vigilante group, and Cox also told the crowd that Ahmaud Arbery and Trayvon Martin, an unarmed black man and teen shot dead in Georgia and Florida, respectively, were both killed by vigilantes.

"We reject the notion that armed militia members are here for protester protection," she said. "It serves only to intimidate the free and lawful expression of free speech."

She called on the City of Missoula and the police department to join the Black Lives Matter movement in rejecting and condemning vigilantism.

Ja'Ton Simpson, a former Griz football player, said he's become a better person by facing his own anger and managing it in a better way.

Simpson said he's been encouraged by bans in cities across America on "no-knock" warrants and police chokeholds, similar to the move that killed Floyd on May 25.

"We are not trying to start a race war," he said. "No, we are not. We are trying to end racism. We're being actively involved in anti-racism."

Sarah Smith, a rally attendee, said she was there because she wants to support the spread of knowledge.

"I’m excited about this rally today because of their focus on educating people about the issues," she said.

London Marq said the United States was built on slavery and white settlement on Native American lands. He said everyone is affected by racial injustice and said white people need to actively work on ending racism every day.

"The fact of the matter is, you need to care," he said, before shouting at the top of his lungs.

Echoes of dissent: Missoula's history of protest dates back more than a century

Missoula County had one active COVID-19 case as of Monday morning.

A former day care owner and her husband are set to change their pleas in a pair of child abuse cases that involved leashes, malnourishment and videos of humiliating disciplinary tactics.

The letter is in response to an outpouring of community feedback calling for change in the wake of the death of George Floyd.

The early 19th century plight of York, Capt. William Clark's black slave, has too many parallels for comfort in 2020.

London Marq, center, Ja'Ton Simpson, right, and others lead the crowd in a chant at a Black Lives Matter rally in Caras Park on Sunday. Several hundred people gathered to listen to speakers talk about racism and ending inequality.

People attending the rally applaud for one of the speakers. The crowd filled the covered pavilion and spilled out into the park.

People attending the event were encouraged to write letters to the mayor in support of the Black Lives Matter movement.