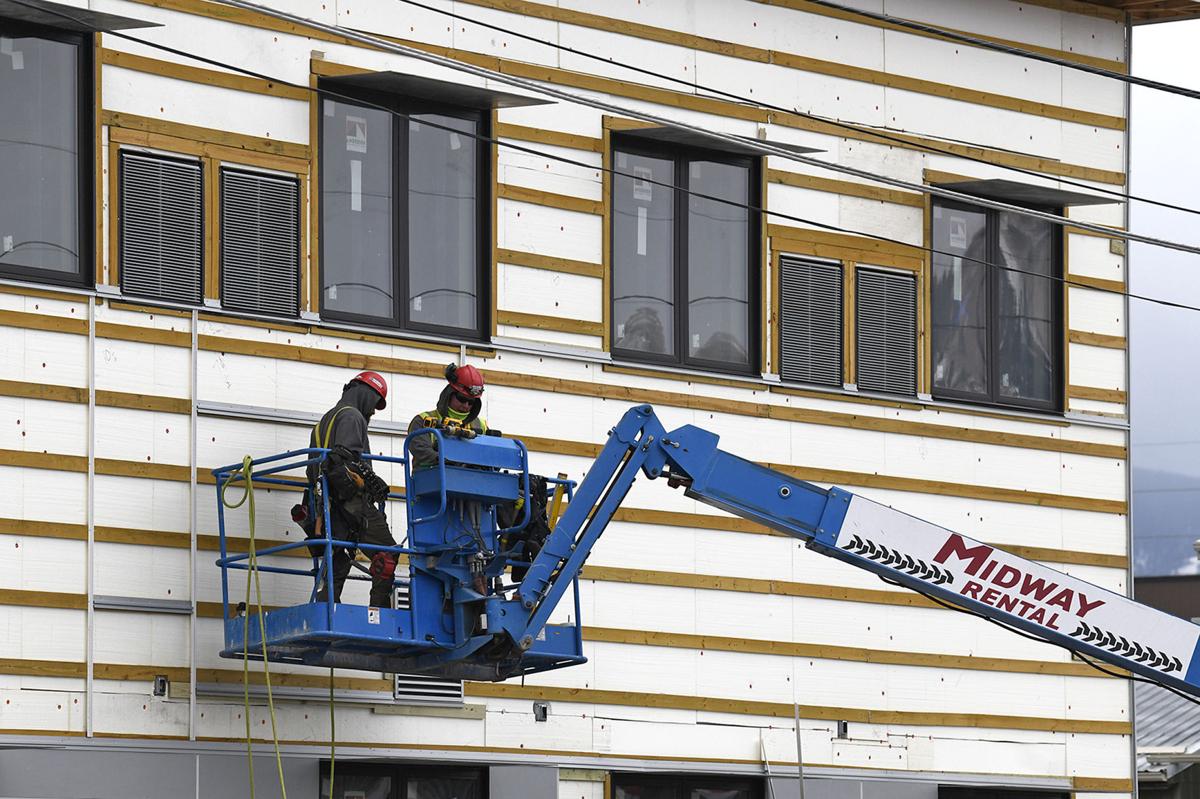 Work continues Monday on the exterior of the YWCA Missoula's new facility, The Meadowlark. The building will have 31 rooms for homeless families and 13 rooms for individuals and families fleeing domestic violence. 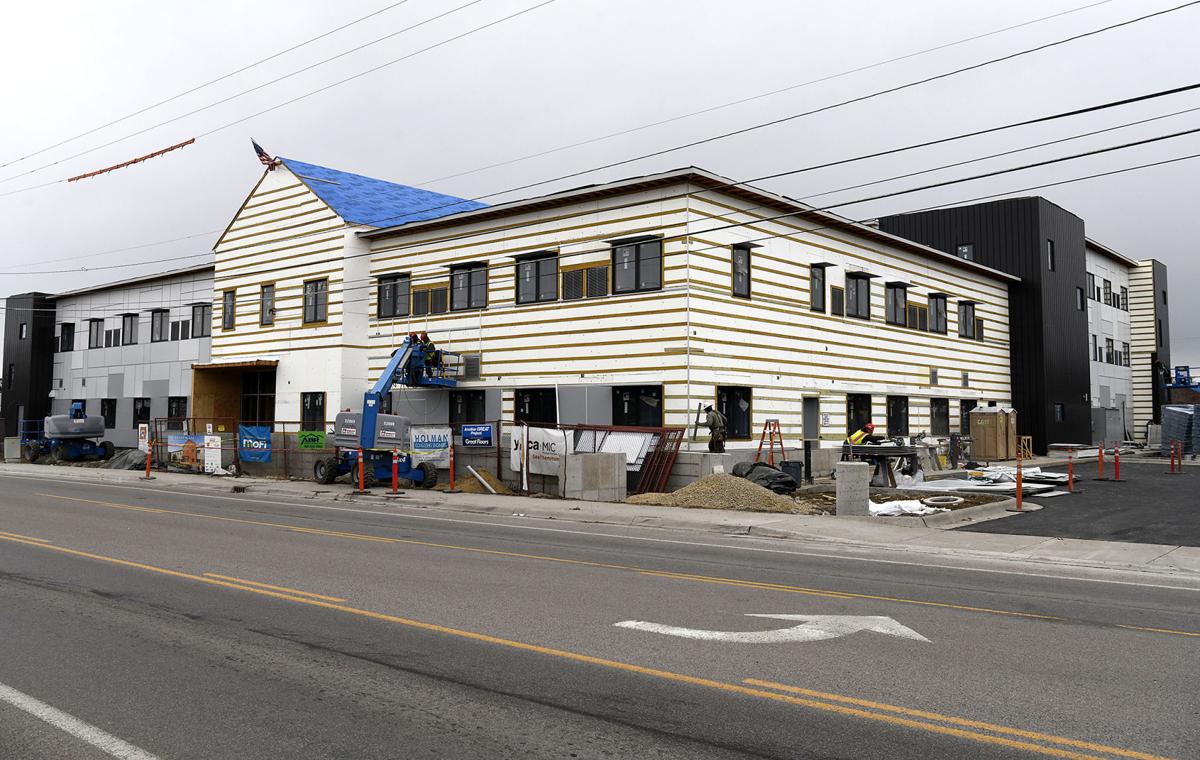 The 36,750-square-foot Meadowlark is scheduled to be completed by March 2021. YWCA Missoula, which is partnering with the Missoula Interfaith Collaborative on the project, recently announced they've reached their $8 million fundraising goal for construction of the shelter.

There are four massive, permanent, affordable and emergency housing projects in the works in Missoula County, but the first across the finish line looks to be the YWCA Missoula's new facility called The Meadowlark.

YWCA Missoula, in partnership with the Missoula Interfaith Collaborative, recently announced they've reached their $8 million fundraising goal for the capital campaign to construct the shelter. It's being built on West Third Street, near the Good Food Store.

When it’s complete by April 2021, the 36,750-square-foot building will have 31 rooms for homeless families and 13 rooms for individuals and families fleeing domestic violence. The family housing center, which will occupy one wing of The Meadowlark and be operated in partnership with Missoula Interfaith Collaborative’s Family Promise program, will offer homeless families "same-day access to emergency housing as well as support and rental assistance to move quickly into permanent housing" according to planners with the project.

“We are on budget and on track to complete construction of The Meadowlark by March,” said Cindy Weese, YWCA Missoula Executive Director. “This would not have been possible without the generosity and dedication of this community. We are incredibly humbled by the support this campaign has received.”

The fundraising effort was called the "See Them Home" campaign and featured a dedicated website.

Weese said the challenge was to fund the Meadowlark's construction without affecting the operating budget needed to run the YWCA's existing programs and serve its current clients. The Meadowlark will allow the nonprofit to serve twice as many people as they currently do. The facility will include amenities like a secure playground, a kitchen and 24-hour staffing.

In 2018, the YWCA served 400 homeless families and domestic violence victims.

“These numbers may be surprising...because out of fear or shame, homeless parents are doing their best to remain hidden,” Weese told a crowd at the groundbreaking for the new facility in 2019. “But the fact is Missoula's home to the largest population of homeless families in the state. And it’s also a fact that the majority of those families are led by a single mom, and the leading cause of homelessness is domestic violence.”

“In Missoula, on any given night there could be 50 families, 110 kids, sleeping in cars or unsafe situations,” said Casey Dunning, Missoula Interfaith Collaborative Executive Director. “We set forth to create a different reality, one where, if a family loses their housing or if someone is fleeing domestic violence, they won’t have to be on a waiting list for weeks. They will have a safe place to go right away.”

The other affordable housing projects in the planning process include the Missoula Housing Authority's 200-unit Villagio project along with The Trinity Apartments, which will be two different sites that will have a combined 202 affordable units.

Missoula City Council leadership said Tuesday that this year's budget makes "the most significant investments" that "the City has ever made" to address community-wide issues such as mental health and affordable housing,

The multi-million-dollar projects the agency supports are a source of pride among some, but draw the ire of others who argue the MRA gives "handouts" to developers.

Nonprofits are ramping up and Missoulians are banding together and forming grassroots groups in an effort to help neighbors in need as the coronavirus crisis evolves.

Chef John Ritner and his brother Ben have created shelf-stable, freeze-dried backpacker meals that weigh less than 5 ounces and have much more protein than store-bought brands.

Missoula-based Kind Apparel has rebranded as Youer, Mann Mortgage was named one of the top workplaces in the U.S. by Outside Magazine and Burns St. Bistro now delivers weekend brunch.

It can take a decade for a subdivision to get approved in Missoula County, and the demand for housing is far outpacing supply.

Part One: Just before Thanksgiving, two Missoula lives intersected in a most traumatic way. Who he was, and what she did, crystallize both the chaos and charity that have tattooed this unforgettable 2020.

Be here for each other: Murdered man's memorial highlights homelessness

No next of kin came to care for Lee Roy Nelson in death, but 50 people who called themselves his family came together just a few steps from where he died to say goodbye.

Ceremony held for 25 Missoula homeless individuals who died in 2020

"The people who passed away this year while experiencing homelessness are much more than just names for us."

Work continues Monday on the exterior of the YWCA Missoula's new facility, The Meadowlark. The building will have 31 rooms for homeless families and 13 rooms for individuals and families fleeing domestic violence.

The 36,750-square-foot Meadowlark is scheduled to be completed by March 2021. YWCA Missoula, which is partnering with the Missoula Interfaith Collaborative on the project, recently announced they've reached their $8 million fundraising goal for construction of the shelter.