TWIN BRIDGES – Only in darkness can you see the stars.

Martin Luther King Jr. spoke those words to give people hope to stave off the darkness.

But amateur astronomers need no encouragement – they live for the darkness that allows them to see the jewels of the night sky.

And in times like these, astronomer Joe Witherspoon might add a corollary: Only in darkness and over time can you see a comet.

Comets – really bright comets – can still cause a stir even though fewer people can now see the night sky because of city lights.

Some spectacular comets have even landed in popular culture.

Halley’s comet swings past the Earth every 75 years. Mark Twain bragged that he was born in one of those years, 1835, and he died the day after the comet returned in 1910.

In 1997, Comet Hale-Bopp lingered bright in the northern sky, attracting the attention of a Los Angeles cult. Cult members committed mass suicide, believing they could reach an alien spacecraft that was supposed to be following the comet.

But most comets pass by Earth unseen.

Fifteen comets are now passing through the solar system, but they’re too small or dim to be seen with the naked eye.

But one, ISON, is getting brighter by the day and has many astronomers excited.

A comet is a conglomeration of rock and ice that produces one or more tails of vapor and gas as it nears the heat of the sun.

One of the intriguing things about ISON is its green color, produced by the release of cyanogen gas and carbon. Six months ago, some were even calling it “the comet of the century.”

As it’s gotten closer, however, its behavior hasn’t quite matched some of the predictions. So some astronomers are backing off that claim. But they’re still hoping it will be as bright as predicted if it survives its trip around the sun.

“(Professional astronomers) are kind of fudging now. We’re still waiting to see what happens,” Witherspoon said. “One constant thing about a comet: It’s unpredictable. You don’t know how much ice is on this thing, so how bright is it going to get?”

After Nov. 17, Comet ISON – named after the Russian organization that spotted it – is expected to be bright enough to be seen by the naked eye. But as it travels toward the sun, it will sink lower in the eastern sky and be visible only before dawn.

It will slingshot around the sun on Thanksgiving Day and pass closest to the Earth on Christmas Day before leaving the solar system.

“They had wanted all the clubs to do something on Thanksgiving. They wanted to call it the Thanksgiving Day comet and get everyone out,” said Lynn Powers, president of the Southwest Montana Astronomical Society in Bozeman. “But they knew it would be so difficult for families to give up Thanksgiving.”

Science writer David Dickinsen said the first week of December, after the comet passes the sun, would be the best week for viewing the comet at its brightest when it will be visible at dusk.

In the early morning hours of the past month, Witherspoon has sat vigil at his computer in a hut outside his home southeast of Twin Bridges.

Often he stays up all night, peering into the universe only to turn his focus on ISON at about 3 a.m.

Nearby sits an almost identical hut he built with a special feature: a pair of rails that allows the roof to be slid aside to expose two large telescopes.

After retiring three years ago, Witherspoon and his wife traded the noise and lights of Tacoma, Wash., for silence and sagebrush of the Ruby River Valley.

Many people covet the area’s mountain scenery or the fishing, but for Witherspoon, it’s his high-tech huts and the unbroken sky above them that make it his dream home.

The low profile of the Highland Mountains is barely noticeable next to the wide Beaverhead River Valley spreading southwest from Witherspoon’s vantage point. Only the foothills of the Tobacco Root Mountains behind his house mar a prairie expanse of sky.

But more important than a lack of physical obstacles is the lack of artificial light. That’s really what attracted Witherspoon to Twin Bridges.

“In Tacoma, you often had clouds, and when you didn’t, you had so much light pollution, you couldn’t see anything that was really dim,” Witherspoon said. “If you look at the picture of the U.S. at night, the dark spots are where you don’t have lights. There’s one in Arizona, one in Wyoming and one here. We came here.”

Obsessed with astronomy since childhood, Witherspoon finally invested in his first advanced telescope 20 years ago after retiring from the U.S. Army. Since then, he’s had a lot of time to design his pet project, the most equipped private observatory in Montana.

The two telescopes sit on concrete pillars sunk 6 feet into the ground and passing through the floor so the telescopes don’t vibrate when people walk inside the hut.

Witherspoon engineered everything, including the sliding roof setup, which a few astronomers around Bozeman have copied, Powers said.

From the warmth of his computer hut, Witherspoon can command the movements of the telescopes. He can also trigger a camera on the telescope to take photographs with timed exposures, which are necessary to pick up very dim objects, such as incoming comets.

At regular intervals, Witherspoon photographs specific sectors of sky. Using software, he can line the photographs up to see if any points appear to shift over time, indicating a possible comet or asteroid.

While working on his images, Witherspoon sometimes uses Skype to talk to other sleep-deprived astronomers across the nation and compare findings.

So it’s not surprising that Witherspoon and an army of amateur astronomers have been recruited to focus on areas of the solar system where professional astronomers don’t have the time to look.

“They’re finally realizing that we’re in a shooting gallery. These asteroids can pop on us at any time,” Witherspoon said. “Most of these near-Earth asteroids are small, but every once in a while you see one that’s 4 kilometers. It’s shaky that they come in that close.”

In February, a large asteroid exploded in the skies over Russia. It surprised astronomers because, like a sneaky fighter pilot, it came from the direction of the sun so no one saw it.

But three papers on the Russian asteroid published last week suggest that the risk of asteroid impacts is 10 times greater than previously thought and similarly large asteroids could penetrate the Earth’s atmosphere roughly every 25 years. Since the Earth’s surface is mostly water, the asteroids don’t present much danger.

Still, Witherspoon could have a busy retirement spent mostly in the dark. But for at least the next two months, Comet ISON will brighten his nights.

Can CO2 be transformed into jet fuel?

“Instead of burning it, we try to bring something to the site so we can use it and create something beneficial.” 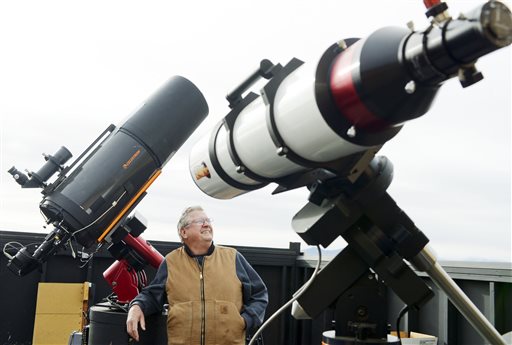 Amateur astronomer Joe Witherspoon has been watching the comet ISON for the past few weeks from his home observatory outside Twin Bridges. 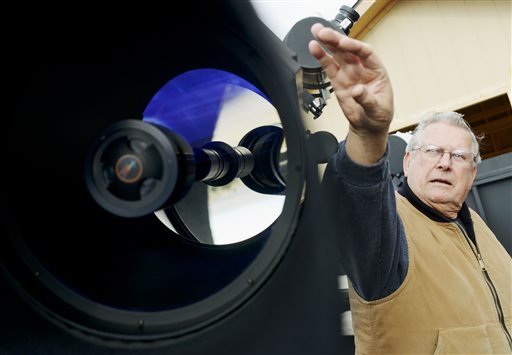