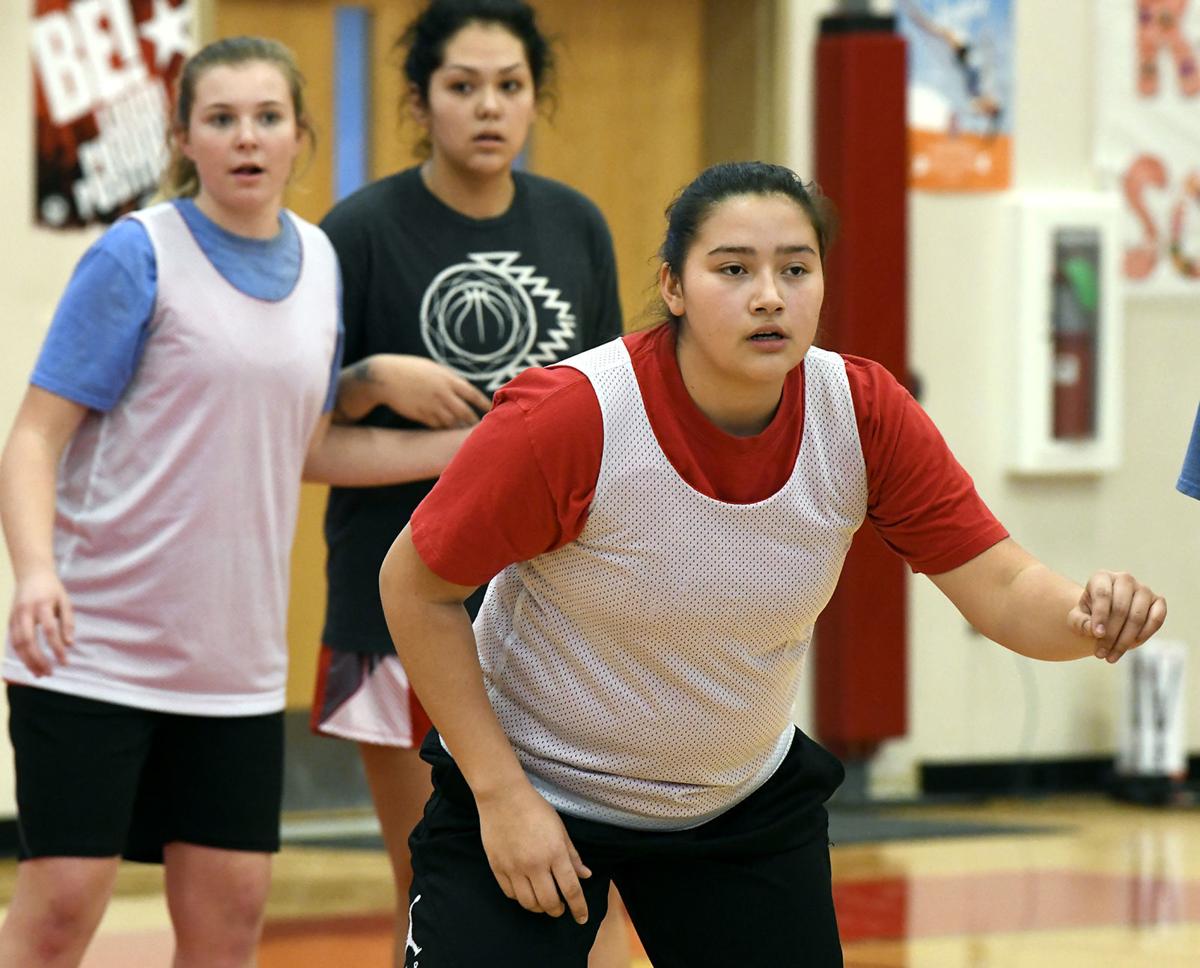 Halle Adams, right, a sophomore at Arlee High School, practices with the Scarlets basketball team recently. Adams and other members of the team have been involved in the Warrior Movement, which started last year to create awareness of suicides on the Flathead Reservation and encourage those struggling to ask for help. 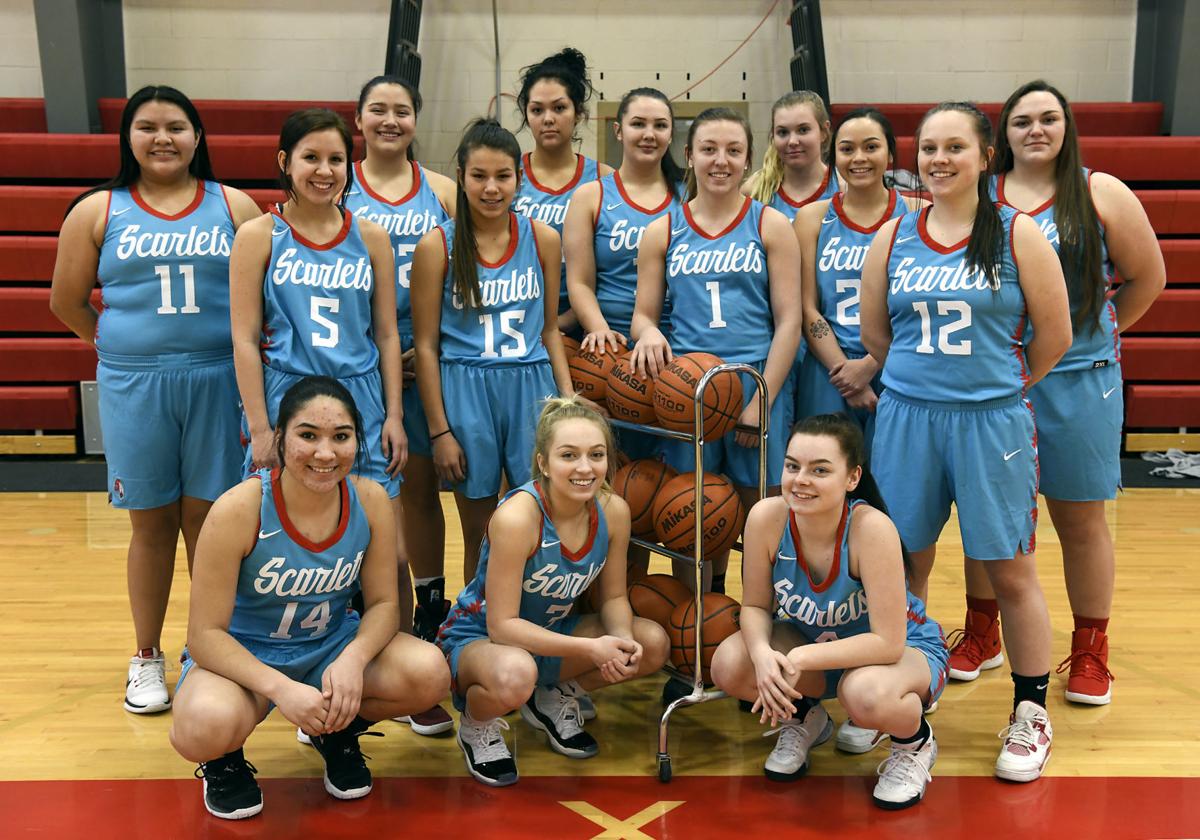 Many members of the Scarlets are involved with the Warrior Movement, which isn't limited to basketball players. 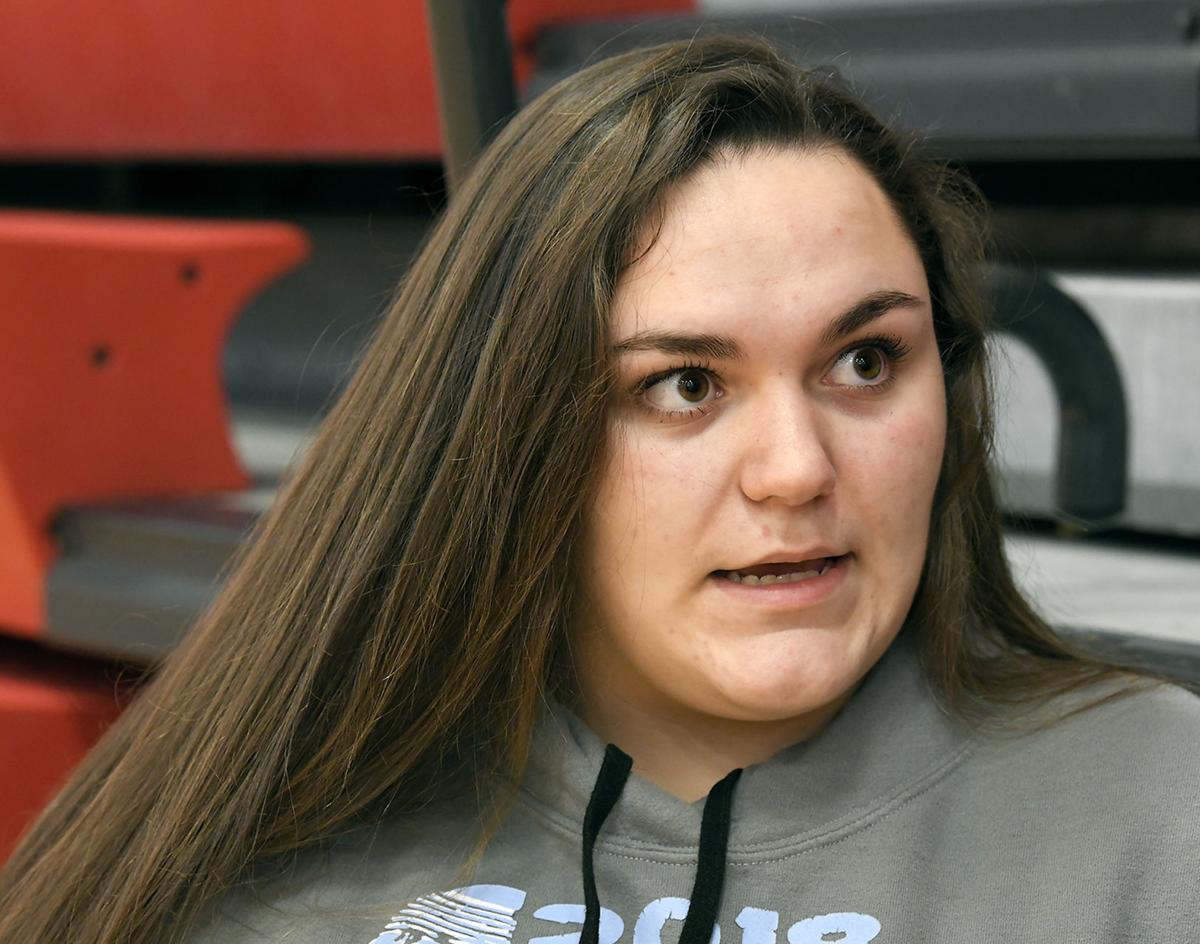 Peyton Lammerding, a junior and manager of the Scarlets, has been very involved in the Warrior Movement.

Halle Adams, right, a sophomore at Arlee High School, practices with the Scarlets basketball team recently. Adams and other members of the team have been involved in the Warrior Movement, which started last year to create awareness of suicides on the Flathead Reservation and encourage those struggling to ask for help.

Many members of the Scarlets are involved with the Warrior Movement, which isn't limited to basketball players.

Members of the Warrior Movement never thought it would be a big deal.

The group started when the Arlee boys basketball team, the Warriors, made a video dedicating their 2018 state championship to lives lost by suicide on the Flathead Reservation. In the months leading up to the tournament, the community experienced a cluster of suicides and the team wanted to create awareness in their community and encourage those struggling to ask for help.

The video quickly garnered thousands of views and nationwide interest which only increased following a New York Times Magazine article, a visit to Nike and a recent episode on NBA’s “Beyond the Paint” show.

Seemingly overnight, the group found themselves in the limelight facing the question: What’s next?

The answer is a work in progress, although the group is now a nonprofit with an active social media awareness campaign, potential plans to partner with after-school organizations, community dinners, and other efforts tied to athletic events.

The group also wears their warmups with the suicide prevention hotline number to games. The Scarlets, the girls team, will play in a Class C state tournament opener versus Scobey in Great Falls at 2 p.m. on Thursday. The Warriors will play a Class C challenge game versus Twin Bridges at 4 p.m. on Wednesday in Deer Lodge.

At the end of the day, the movement is just trying to further the message that unity is the way through.

Those outside Arlee may not realize the full scope of the group, which expanded to include many members of the girls basketball team, the Scarlets, following last year's tournament.

The movement isn’t limited to basketball players, nor is it a school-affiliated group. However, the players who are involved feel that athletes are a critical part of propelling the movement’s message.

Their involvement makes a big difference, because people tend to think, "Oh, athletes don’t understand what it’s like to be down," said Nikki Ironshell, a freshman Scarlets player. "But I think the Warrior Movement has helped a lot because a lot of us have struggled.”

In January, the Warrior Movement released another video directed by local videographer Jordan Lefler featuring players from the boys and girls teams speaking on the importance of reaching out for help.

In the video, each player holds an item such as a volleyball or football, representing one of their other hobbies outside basketball as an attempt to reach more youth and relay the message that everyone can help prevent suicide.

The video was the first to highlight the girls' involvement. Some of the girls have played an important role in pushing the message of unity, beginning soon after the 2018 state Class C tournament.

“We just want to make a difference, leave a mark and hopefully pass it on to future generations and know that no matter what’s going on in life, you can stand up for something and you don’t have to be ashamed of it,” said Sydni Rogers, a senior Scarlets player.

Lefler filmed the recently released video last June. Later that month, some of the girls went on the visit to the Nike World Campus with the boys to talk about the movement and what it’s like to be a Scarlet.

“It was a really good opportunity to show what the whole team, like girls and boys, are made of,” said sophomore Scarlets’ player Halle Adams.

More recently, three boys and three girls appeared in the NBA TV special. Nike also sent the Scarlets and the Warriors gear, including the warmups with the suicide prevention hotline number — 1-800-273-TALK (8255)​ — on the back, as well as turquoise jerseys that the Montana High School Association approved the teams to wear in two games.

The turquoise color represents unity and equality, two themes that have emerged more and more over the past year, said Peyton Lammerding, a junior Scarlets player who’s acting as the team’s manager while she’s out for an injury.

“I got a lot of ‘Oh, you’re a girl, you didn’t earn this to be in the video. You didn’t earn it to go to Nike,’ a lot of just that, ‘You’re riding off the success of the boys,’” Lammerding said.

The movement led Lammerding to develop an interest in the history of the Scarlets, who chose their name in the early 1970s as a way to claim their own identity. Although it’s not a direct translation, “Scarlet” carries the same meaning as “Warrior.” Lammerding is researching the Scarlets’ history for her National Honors Society project.

Lammerding said the girls' involvement is important because "mental illness doesn't know the difference between men and women.”

Last summer, Peyton, Adams and several other girls were invited to take part in scalp dances on the pow wow grounds with elders from all over the world.

“It’s very rare that a woman would be part of the battle,” Adams said. “They are the fierce ones and they are also the protectors.”

At the dance, the girls’ aunties and family members disguised them and covered their faces in charcoal to portray “the fearless one” whose identity is hidden.

“They go in a circle and then they do special songs and you’ll hit them with a stick, like hitting them with medicine. … You’re telling them ‘I’m here, I got your back,’ pretty much,” Adams said.

Lammerding and Adams said the scalp dances helped them feel more connected to the movement as fearless warrior women. They and several other Scarlets players also said they feel the movement has brought the boys and girls teams, and the community, closer.

“While I was in junior high, the teams didn't really seem like they were connected with each other, they didn’t really associate, and I think that this brought us a lot closer and even the community as a whole,” Ironshell said. “We had a family night and everybody could just come and eat with their family and I think that’s really helpful, just the support of other people.”

“We really all care about each other and it’s had a huge impact, especially on the reservation,” Whitesell said. “People aren’t as afraid to speak up. If you’re down, if you need help, we’ve got each others’ backs."

The Warriors and Scarlets have also been reaching out to other teams within their school. Both teams recently went to support the Arlee boys wrestling team at their final match, where they gave wrestlers Warrior Movement gift bags.

This year, the Warriors and Scarlets also started riding the same buses to away games where they give rival teams similar gift bags.

Susan Carney, the Scarlets assistant coach and Lammerding’s mother, said she was initially hesitant about the movement but she thinks it’s helped unify the community and emphasize the importance of suicide awareness among youth.

“As you grow up, you have people come to your school or the counselors saying ‘OK, here are the signs. They’re going to do this and that and you need to tell a responsible adult,’” Lammerding said. “It became a monotone thing.”

Lammerding and Adams said it never really hit home until the cluster of suicides in the valley.

“It just keeps going on and on and on,” Adams said. “A person will come to school and tell you the steps to (prevent) suicide, what you need to do, but they never tell you how to deal with it emotionally, mentally, physically or whatever.”

The girls said they feel the Warrior Movement is helping people reach out and ask for help.

“That’s what those presenters that came to school always failed at, the unity part of it,” Lammerding said.

The movement is also spreading to other schools throughout Montana and neighboring states, which have voiced their support on social media. Jordan Lefler said the group’s Facebook page continues to be flooded with messages from people who share how the movement has helped them.

Doug Lefler, the board president of the Warrior Movement, said they're looking at ways to expand, such as establishing ambassadors at different schools on the reservation. They’re also in the early stages of organizing after-school activities with the Lake County Boys and Girls Club.

Lefler said that anyone interested in becoming more involved in the movement can visit their website or email warriormovement@outlook.com.

The Scarlets will play in a Class C state tournament opener versus Scobey in Great Falls at 2 p.m. on Thursday.

The Warriors will play a Class C challenge game versus Twin Bridges at 4 p.m. on Wednesday at Deer Lodge.

The Lake County Commissioners see much to improve in their county's infrastructure: an event center, a stage upgrade at the county fairgrounds…