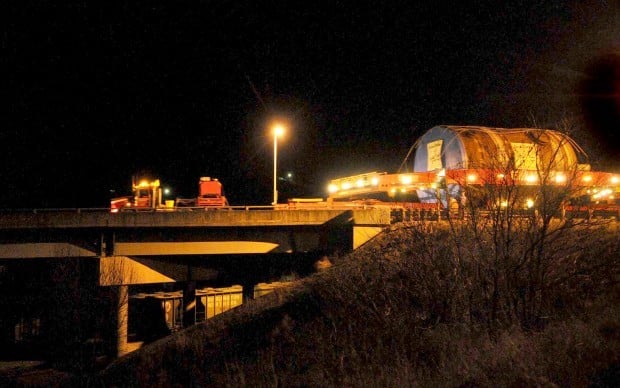 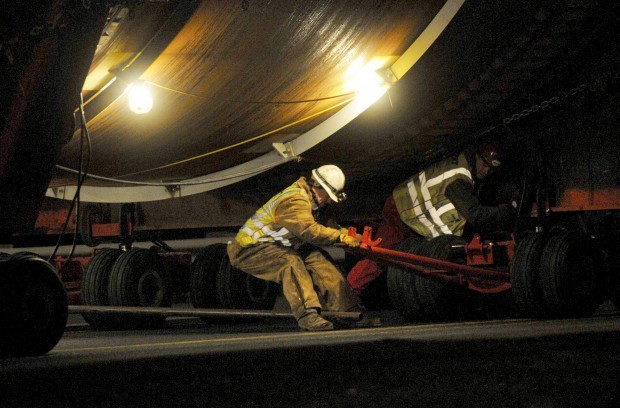 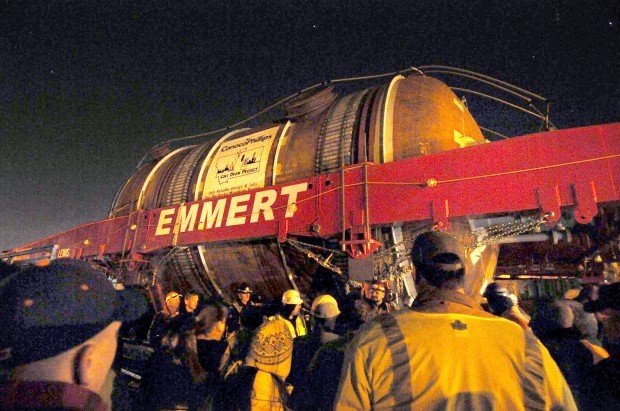 Workers and support crews gather for a safety meeting about 45 minutes before the oversize loads leave Lewiston, Idaho, earlier this month. Photo by LINDA THOMPSON/Missoulian 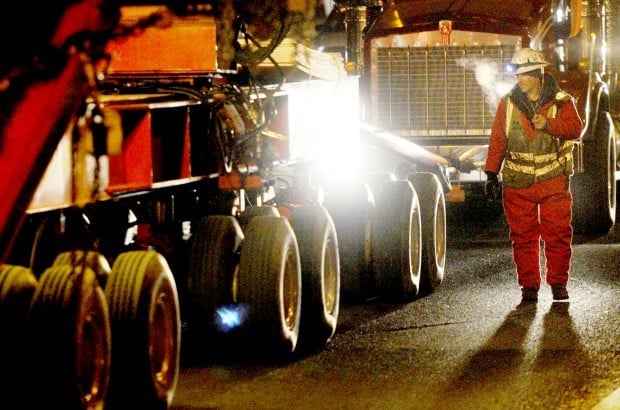 Throughout the coke drums’ journey, workers walk alongside the 226-foot-long load. Photo by LINDA THOMPSON/Missoulian 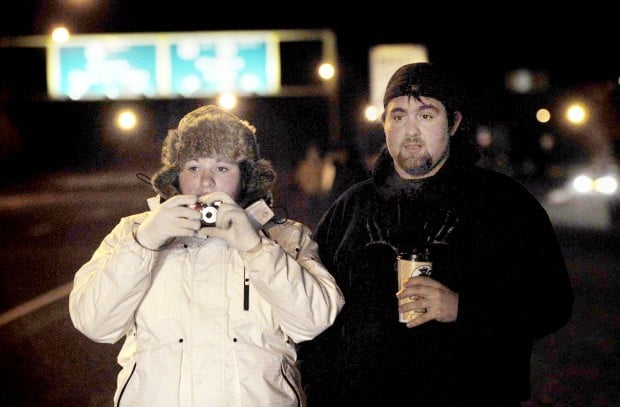 Kylee Stamper and Mickey Brown of Lewiston wait for the oversize loads to pass by Tuesday evening. “My Grandma is so excited and needed pictures,” says Stamper. “She says we are making history.” Photo by LINDA THOMPSON/Missoulian 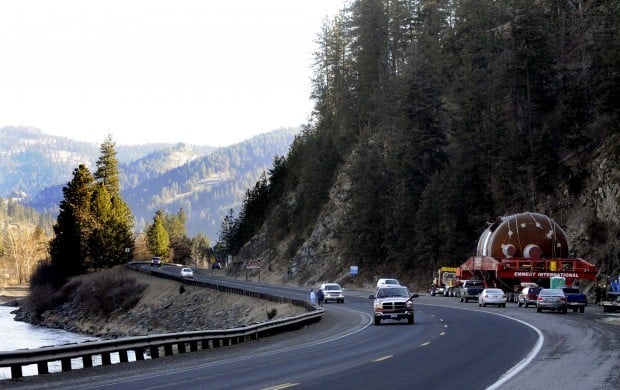 One of ConocoPhillips’ oversized loads sits just off U.S. Highway 12 on Wednesday morning, some 38 miles from its start in Lewiston, Idaho. Photo by LINDA THOMPSON/Missoulian 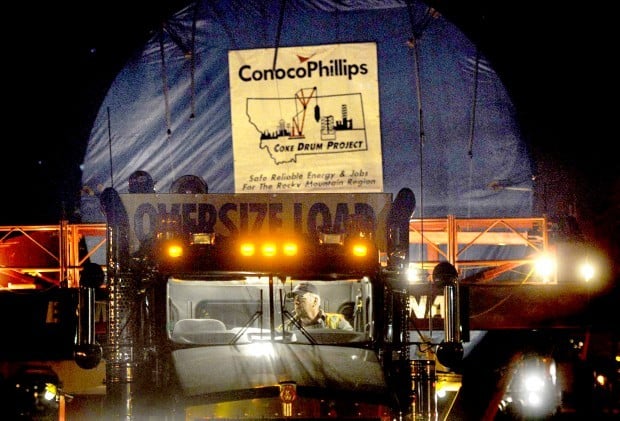 The load of ConocoPhillips coke drums sits in a vacant parking lot adjacent to the Port of Lewiston, shortly before traveling U.S. Highway 12 Tuesday evening. Photo by LINDA THOMPSON/Missoulian
By KIM BRIGGEMAN of the Missoulian

LEWISTON, Idaho - A mass of steel and a touch of irony made big-rig watching the most popular sport in town here as Tuesday night turned to Wednesday morning.

Hundreds lined the streets and highways as ConocoPhillips' first partial coke drum made its way out of town on a starry frigid night, passing a cheery Chamber of Commerce sign that reads "Thank You For Visiting Lewiston."

It had been a long 8 1/2 months and a whole lot of angst since the arrival of this and three other immense loads that will replace two 20-year-old drums at the Conoco refinery in Billings. The others remained at the Port of Lewiston, six blocks and nearly an hour's travel back.

Conoco's moving company, Emmert International of Oregon, would spend another hour stripping the 300-ton megaload down to cross the Arrow Bridge, a dozen miles into the route, before arriving at its appointed layover west of Orofino at 3:20 a.m.

Graham stood on the curb at the edge of town in sub-20-degree temperatures as the big rig and its entourage rolled across U.S. Highway 12 and onto a short stretch of frontage road. At least 40 cars were parked there at the strategic stretch of the parade route. While a cluster of camera-toting reporters and videographers gathered near the "Thank You" sign, many others stayed in their cars, heaters running, to watch the show in comfort.

Graham was on his way home from a class that ended at 10 p.m., the designated starting time for the move, and thought he might as well stop and watch.

"I've seen it once now. It's probably the last time I'll come out," he said.

He chatted with Ken Bausch, who's in the house-moving business in Lewiston and neighboring Clarkston, Wash. Bausch has kept close tabs on the Conoco project, as well as on Imperial Oil/ExxonMobil's proposal to move 207 similarly massive modules along the same route in Idaho en route to Canada.

"I've been rootin' them on," said Bausch.

He will be happy to hear the load reached the first-night destination without serious mishap, and nothing happened that could be blamed on opponents of the project.

"Everyone seemed to behave. We didn't have any trouble in that regard," ConocoPhillips spokesman Bill Stephens said Wednesday.

Friends of the Clearwater organized a dozen "monitors" from Moscow and Lewiston to follow the loads, timing traffic delays and collecting other data to determine if Emmert was following the conditions of its oversized load permit.

They found the potential for multiple violations, said Brett Haverstick, but want to organize and compile the information from all four nights of travel in Idaho before offering a critique. The Idaho Transportation Department can revoke future permits if the guidelines aren't adhered to.

"We want to do this right," Haverstick said. "But this is the real deal. The circus is in town. People need to realize they are going to be coming daily, weekly, monthly and yearly for years to come."

An hour before Tuesday night's move began, Chip Kachel, Emmert's head of logistics, called together the more than 30 people directly involved for a safety meeting. The megaload, sporting strings of lights like Christmas decorations across its side, loomed above in the night sky.

With the roar of diesel engines obscuring his instructions at times, Kachel reminded the crowd that their safety mattered above all else.

"Anybody on this job can stop this job," he said, and cautioned, "Do not get in our area (around the transporter itself). It's very dangerous. There are a lot of different moving parts here."

Kachel said to expect slow going at the start. All those moving parts weren't going to function at an optimal level on such a cold night.

Indeed, when lead driver Charlie Prebble, who seems to be a legend of sorts at these things, honked a warning honk at 10:07 p.m., and an unidentified driver of the "push" truck followed with a longer blast, the rig moved only a few feet.

The ground crew, which would spend much of the evening afoot alongside and under the moving monstrosity, hurriedly fiddled with the hydraulics that control the 24 axles and 96 wheels on the transporter.

Another two blasts and the rig began moving at 10:10 p.m., this time slowly creeping out of a parking lot at the Port of Lewiston onto Sixth Street. News crews and amateur gawkers were there to watch and record the moment.

It was nearly 11 p.m. before the dozen-vehicle escort crossed U.S. Highway 12 and cleared the city limits. Because of the green overhead highway sign that directs traffic north to Moscow and Pullman on Highway 95 or east to Missoula and Boise on Highways 95 and 12, the next half mile's travel was on a frontage road. The top of the megaload, 28 feet from the ground, was too high to fit under the sign.

More than an hour later, at 12:20 a.m., the procession stopped at the west end of Arrow Bridge, where Highway 12 crosses to the south bank of the Clearwater River 13 miles from the Port of Lewiston. Working in temperatures that dipped deep into the teens, and in a cold east breeze that dropped the wind chill much farther, the ground crew detached the push truck to lighten the load. Then they added more dollies under the drum to disperse the weight before crossing.

It was construction on the Arrow Bridge that initially held up Conoco's plans last summer, after the company shipped the four halves of oil drums from their birthplace in Japan and barged them up the Columbia and Snake rivers to Lewiston. They were unloaded at the Port of Lewiston on May 17, 2010.

Bridge construction hit setbacks in the early summer, and the project stretched well into the fall, ConocoPhillips opened up its checkbook to hurry things along. At a court hearing in November, the company revealed it spent $340,000 on the construction job alone. In August, opponents of the loads filed papers in Idaho district court challenging the Idaho Transportation Department's decision to approve permits for the groundbreaking moves.

As midnight neared Tuesday, Prebble signaled a restart from the pull truck and the 60-foot-long drum, secured in a transporter more than 220 feet long with dozens of wheels front and aft, inched across the bridge. No other vehicles were allowed on the 1,248-foot bridge. Eight minutes later, the load was across and work began to reattach the push truck and deactivate the additional dollies.

From there, the crowds thinned out and the delays did, too. It took less than 2 1/2 hours to navigate the final 24 miles to a pull-off west of Orofino near the Pink House Recreation Area. Most of the crew headed into an Orofino motel to catch some sleep.

The gawkers began arriving at sunup Wednesday, about the same time the first steelhead fishermen put into the wide Clearwater that crowds the highway at this point. By midmorning, at least 100 people had stopped to look and take pictures, two security men from BSI Security said.

Among them were Bill and Loretta Allen, who drove the couple of miles from Orofino and walked around and under the transporter. Loretta tried to snap a picture that would do the thing justice.

"It's hard to tell how big it is, even when you're right up next to it," Bill Allen said.

Things went as well as could be expected on the shakedown run, Stephens said.

"This is custom-made equipment and the first time they've moved it, so they were kind of extra cautious in places, largely where they were out of the way, and not holding up traffic significantly," Stephens said. "They'll fine tune their traffic management so they'll be better at it each night. We're just very pleased we got there safely."

The next stop was set for the outskirts of Kooskia, some 35 miles away, by 5:30 a.m. Thursday. A series of cliff faces close to the highway spice up that leg.

Then it's on up the Clearwater and Lochsa rivers, always on Highway 12, with one more layover halfway up the 100-mile stretch before the procession tops Lolo Pass. The rig will be parked just inside Montana. On Monday, a second drum will start the four-night trip to the pass. Conoco and Emmert officials hope to let the two rigs roll in tandem down the Montana side on or around the night of Feb. 10.

Cold weather, sharp corners and a mild run-in with a well-known challenger marked the second night of the ConocoPhillips haul in Idaho.

Big trouble for a big rig in Idaho: There's snow on Lolo Pass and non-moving violations below.

KOOSKIA, Idaho - Huckleberry sourdough pancakes, cigarettes and bulbs for strobe lights are among the purchases megaload crew members are maki…

Highway 12: Megaload of refinery equipment inches another 30 miles toward Montana

ConocoPhillips' first Billings-bound megaload pulled over alongside the Lochsa River at 3:11 a.m. (PST) Wednesday after a haul of about 30 mil…

Conoco-Phillips coke drums to be transported through Montana from Lewiston, Idaho, to Billings on U.S. Highway 12.

LEWISTON, Idaho - With a rumble heard 'round the Pacific Northwest, the first ConocoPhillips megaload pulled out of town late Tuesday night and started its three-week trek to Billings.

Police cars and pilot vehicles, an ambulance, a pull truck, a push truck and half a dozen pickups made up the official convoy, which quickly stretched out to a couple of miles long. The curious, the doubters and the fervently hopeful tagged along in their own rigs into the cold, clear night along the northern bank of Idaho's Clearwater River.

Workers and support crews gather for a safety meeting about 45 minutes before the oversize loads leave Lewiston, Idaho, earlier this month. Photo by LINDA THOMPSON/Missoulian

Throughout the coke drums’ journey, workers walk alongside the 226-foot-long load. Photo by LINDA THOMPSON/Missoulian

Kylee Stamper and Mickey Brown of Lewiston wait for the oversize loads to pass by Tuesday evening. “My Grandma is so excited and needed pictures,” says Stamper. “She says we are making history.” Photo by LINDA THOMPSON/Missoulian

One of ConocoPhillips’ oversized loads sits just off U.S. Highway 12 on Wednesday morning, some 38 miles from its start in Lewiston, Idaho. Photo by LINDA THOMPSON/Missoulian

The load of ConocoPhillips coke drums sits in a vacant parking lot adjacent to the Port of Lewiston, shortly before traveling U.S. Highway 12 Tuesday evening. Photo by LINDA THOMPSON/Missoulian
© Copyright 2021 Missoulian, 500 S. Higgins Missoula, MT | Terms of Use | Privacy Policy
Powered by BLOX Content Management System from TownNews.com.
You don't have any notifications.