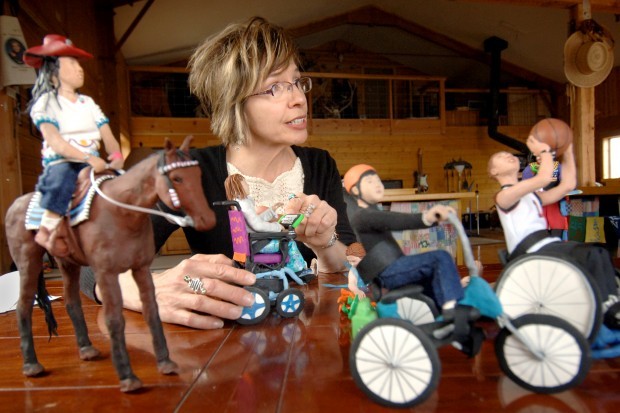 Cyndi Elliott of Polson has created a line of dolls depicting “differently abled” characters like Robin, an artist with cerebral palsy who uses a “stander” to remain upright while doing her artwork. Photo by MICHAEL GALLACHER/Missoulian 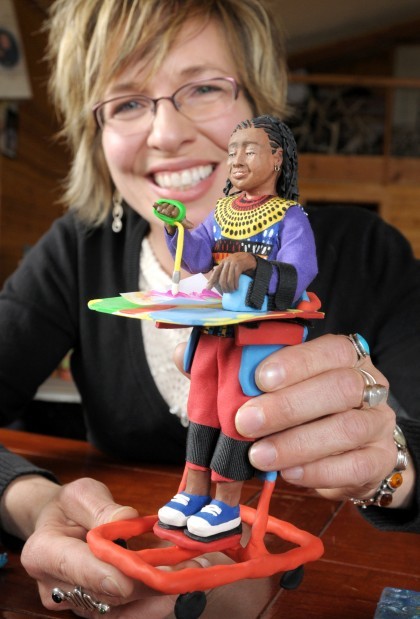 “They have plenty of abilities. They’re ‘differently abled,’ ” says Elliot of the characters represented in her dolls. Photo by MICHAEL GALLACHER/Missoulian
By VINCE DEVLIN of the Missoulian

- Part of a poem about her brother by Cyndi Elliott

POLSON - Cyndi Elliott played with dolls when she was little - baby dolls she could cuddle and feed and nurture, and yes, she admits, she eventually graduated to a Barbie doll.

"Camper Barbie," she says with a laugh, indicating the Barbie whose prized accessory was the "Pink Glamour Camper."

"She was as rugged as Barbie gets," Elliott says.

Now, as the Polson pediatric occupational therapist seeks a manufacturer for the line of dolls she has designed, she can see the need for an accessory for some of them to get around in too.

No glamour camper for these dolls, though. Some of them would use a van with a wheelchair lift.

All deal with something, from spina bifida to autism, but don't call them disabled.

"They have plenty of abilities," Elliott says. "They're ‘differently abled.' "

Indeed, the Mary doll has overcome an infant stroke to compete as a barrel racer. Lily, born with a partial limb, doesn't let her prosthesis keep her from dancing. David was born with Down syndrome, but that doesn't get in the way of his love of music.

While she likes the idea of children with similar issues having dolls they could not only play with, but relate to, Elliott says the market wouldn't stop there.

Her doll line, the 44-year-old woman says, could be used to help siblings understand about a baby brother or sister born differently from them, and would be an excellent way for all children "to get comfortable with how beautiful people different from them can be."

It's something Elliott has known since she was 4 years old.

Her earliest memory is of the little boy endlessly rocking his tiny body back and forth in a crib in the bedroom they shared.

"He was like a grandfather clock, consistent and innocent," Elliott says of her brother David.

She was the ninth child born to the Minnesota farmer and his wife; David was the 10th, and entered the world with a hole in his heart and Down syndrome.

"I loved being with him, taking care of him," Elliott says. "I was amazed at how my brother was this incredible, full, delightful, rich, loving person."

Outside the home, however, no one else seemed to recognize it.

"When we would go out in public, people shied away from David," Elliott says. "That shocked me as a girl. That kind of fuels my mission now. I remember wanting to yell how wonderful this little boy was that they wouldn't look at."

Oh, she had her issues with him. One time when no one was looking, David tore apart, petal by petal, the first dozen roses a boy sent to Cyndi, then a teenager.

"I wanted to be angry at him, but I didn't feel I could," she says. "I got over it a lot quicker when I realized they were just roses, but he's my brother."

That memory fades to a distance among all the wonderful ones she has of David, such as his penchant for sitting at their father's feet and rocking back and forth to the polka music Dad played on his accordion.

"That was a beautiful thing to come home to," Elliott says. "I felt like I had such a rich life."

Music made its way into David's life, and Elliott says he seems to know every song ever recorded from the 1920s on, and plays them with gleeful abandon on his saxophone.

"He plays the sax in his own way, and to his own rhythm," she says, "but his enthusiasm is infectious."

David is 40 now, and still lives north of Minneapolis with their mother and a brother who helps care for them both.

"Although the joke is David takes care of everybody," Elliott says.

He loves Mickey Mouse, loves his sax, loves his music, loves to dance.

And yes, the David in Elliott's doll line is modeled after a younger version of her favorite brother.

The other dolls are inspired by the young patients she sees in her private practice, wHOLEhearted LLC, so named both for the hole in the heart people with Down syndrome, like her brother, are often born with, and for the whole person she'd like the world to see these people as.

No other doll represents a specific person, Elliott says, but each is based on a mix of people she works with.

Two of the dolls are in wheelchairs. Multiple sclerosis has taken away the highly intelligent Bella's ability to speak, so her chair is armed with a computer that helps her communicate. Spina bifida has confined Michael to a wheelchair, but can't keep him out of the gym, where he plays basketball.

Robin is an artist with cerebral palsy who uses a "stander" to remain upright and do her artwork.

Mary, the barrel racer who suffered a stroke during birth, comes riding a horse. Steven is a bike rider with epilepsy, Thomas has autism and totes around toy dinosaurs he can list endless facts about, and Lily is the ballet dancer with the prosthesis.

Their designer paints, sings and plays guitar in her spare time, and initially tried to do sketches and paintings of her ideas for the doll line.

"But that didn't work," she says. "I needed 3-D models," and so she tried sculpting the dolls out of clay.

That had its challenges, too. Despite her artistic background she had never sculpted before, and her first attempt at a model for a doll, she says, came out looking like an alien - decidedly not the effect she was after.

By her third try, however, she found the result she was seeking in Lily, who remains her personal favorite.

"As I make them I think about their characters," Elliott says. "Lily is a strong-willed girl. She's a dancer and a swimmer; her daddy calls her ‘Water Lily.' I grew up on a farm in a family of 10 children, and dreamed of being a dancer."

Now, the doll "born" with a partial limb is, in a way, living her childhood dream.

The models for the dolls now legally protected, Elliott is ready to find out if anyone with the ability to make and market the line sees the possibilities she does.

"I don't know the world of toy manufacturing," she says, "but I guess I'll find out."

No matter what, it's part of a lifelong journey undeniably shaped by the ‘differently abled' brother born 40 years ago.

"I've always known," Elliott says, "that David has taught me far more than I ever taught him."

Montana Down Syndrome Association aims to connect families across state

For more than a decade, the annual Missoula Buddy Walk, which raises money for families dealing with Down syndrome, has provided a gathering p…

Cyndi Elliott of Polson has created a line of dolls depicting “differently abled” characters like Robin, an artist with cerebral palsy who uses a “stander” to remain upright while doing her artwork. Photo by MICHAEL GALLACHER/Missoulian

“They have plenty of abilities. They’re ‘differently abled,’ ” says Elliot of the characters represented in her dolls. Photo by MICHAEL GALLACHER/Missoulian
© Copyright 2021 Missoulian, 500 S. Higgins Missoula,MT | Terms of Use | Privacy Policy | Do Not Sell My Info
Powered by BLOX Content Management System from TownNews.com.
You don't have any notifications.