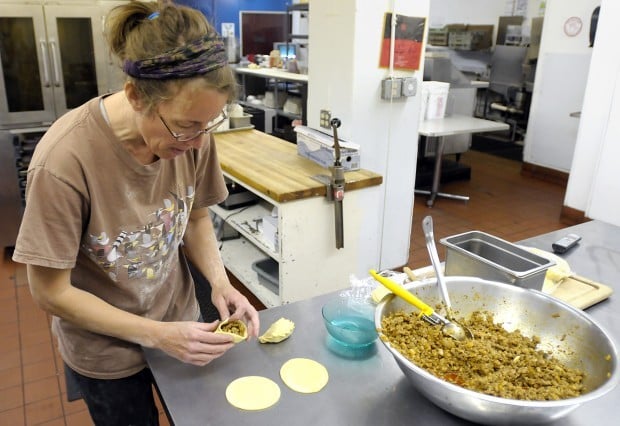 Kim Olson makes empanadas on Friday in the kitchen space she rents in preparation for the Missoula Farmers Market. Olson is one of a number of small food enterprise owners who say that some regulations are keeping their businesses from growing. 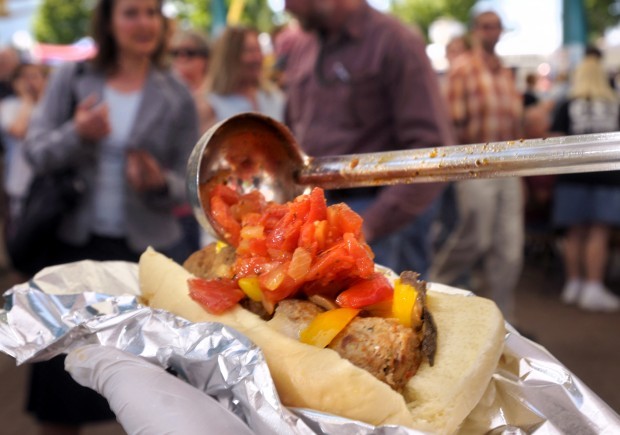 The Kebobery serves up chicken and beef kebabs on a bun at Out to Lunch at Caras Park on Wednesdays.

The exotic flavors - like mango-chili-lime, Nutella-banana and strawberry-balsamic - are rad enough. But owner Zach Bracket said starting the food business here and dealing with the Missoula City-County Health Department has been anything but.

"I was expecting to have to jump through some hoops, but they have made a circus out of the whole thing," Bracket said.

The Health Department is the enforcement arm for state and federal food regulations. Bracket is more blunt about his frustrations with food rules than some of his colleagues in the business, but he isn't alone.

Owners of small food enterprises continue to face hurdles doing business in Missoula even as the local food movement grows. At the state level, an effort is beginning to methodically review food safety laws and regulations. Leaders in Missoula say it's time for some scrutiny on the local front, too, and one food vendor is already on the move.

Kim Olson, the "Empanada Lady," is working to change at least one rule she said is arbitrary and hurts food vendors. Olson said the Health Department is obligated to enforce state laws, but the rules favor big franchises and leave homegrown shops adrift.

"I like to sell healthy, mostly organic, made-from-scratch empanadas using fresh local ingredients. It would have been a lot easier if I had just sold hot dogs," said Olson, who opened in 2005.

Business owners point to a lengthy list of regulatory barriers, but one in particular is a priority for Olson, of eMpanadas. She believes it's making a significant dent in the local economy, at least at Missoula's farmers markets.

The regulation in question limits vendors who have a temporary food license to selling at only 21 events. But Olson said the market isn't limited to 21 days. If a merchant wants to sell even 22 days, the law no longer considers the business "temporary." So the owner must buy a different - and much more costly - permit.

"This law affects all the people who are selling hot, prepared foods at the market. And now there's a lot," she said.

Passing up even a quarter of the sales opportunities is a big hit for a small business and its employees. So Olson said she would like to work the entire season of the farmers market.

Olson is talking with another vendor at the Clark Fork River Market about getting the market board to petition to raise the ceiling to at least 30 events.

But that's just one barrier. She and other merchants name many others, including:

Alex Baer, who opened The Kebobery at Out to Lunch and looked into buying a food bus, said the many hurdles cut down on creative food businesses. But like other owners, he said he knows some of the rules are in place for a reason. In other words, "roach coaches" are nicknamed for a reason.

"They're not brimming with cleanliness," Baer said.

"They have all gone through that procedure and made the investment to do it, to be able to prepare food for the public. So it's something that's very doable," Carlson said.

And locals embrace the outcome, said Bracket: "The attitude in Missoula is really supportive of local businesses."

Nancy Matheson, at the Montana Department of Agriculture, said the state's food industry and its regulations have had a rocky evolution. For instance, most states adopt the entire FDA food code as a template, but Montana historically has selectively adopted rules.

"It's all been sort of cobbled together over the years when there wasn't a food industry. Now that there's a food industry, people are seeing these rules and laws weren't put together in a systematic way. It's very difficult for the sanitarians to make sense of them," Matheson said.

Neva Hassanein, an environmental studies faculty member at the University of Montana, said regulations are important, but "scale matters." Federal rules that make sense for industrial operators may not apply to a local popsicle salesman, for instance.

"We need to look more carefully and systematically at our local food safety regulations and see whether or not they are creating unnecessary barriers to entry for new food businesses," Hassanein said. "And then we need to think about, ‘What are the solutions to this?' ‘How can we achieve both food safety goals as well as local economic development goals related to food businesses?'"

On the home front, Hassanein said another factor is at play, too. A sense of social responsibility enhances local commerce.

"If someone like the empanada lady is making a product, it's not in her best interest to harm her customers. They have a face ... and she has a reputation to uphold," Hassanein said. "So her whole livelihood around it depends on that relationship."

Matheson, special projects coordinator in the agriculture marketing and business development bureau, said the state is just beginning to review food safety laws and regulations for consistency and clarity. And she said local businesses are certain to benefit.

"Yes, that is going to trickle down to the smallest entity," Matheson said.

"I've dealt extensively with temporary food service and mobiles, and I've heard a lot of people both happy and unhappy," McPherson said. "And it's disheartening that people feel like it's a hard process to get through because that's really not at all (how) we want it to be."

She said people who have concerns should bring them directly to the Health Department. A few years ago, the department made it so that people could sell at more events than the state permitted. The state limited vendors with temporary permits to 14 consecutive days, but McPherson said the Health Department adopted a rule to include 21 days of non-consecutive vending. So it added seven days of sales.

And she said the rules aren't arbitrary. Food coaches, for instance, don't get the same oversight as temporary vendors. They are inspected just once a year, so they are held to the same standards as restaurants.

And the Health Department's Carlson said the safety regulations are in place for a reason, namely to prevent outbreaks from things like salmonella and hepatitis A: "Ultimately, we do what we do not to be bureaucrats but to protect the public's health from communicable diseases, and we have had some terrible outbreaks in Missoula."

Wednesday, Montana’s U.S. Senators encouraged the public to get vaccinated, but didn’t endorse the CDC advisory about wearing masks indoors.

In places, this landscape resembles a beige, barren winter. Trees and shrubs have no leaves, chewed off by a grasshopper swarm so large it registered on weather radar as a 170-mile-long thundercloud.

Kim Olson makes empanadas on Friday in the kitchen space she rents in preparation for the Missoula Farmers Market. Olson is one of a number of small food enterprise owners who say that some regulations are keeping their businesses from growing.

The Kebobery serves up chicken and beef kebabs on a bun at Out to Lunch at Caras Park on Wednesdays.