Horses arrive in Kalispell by plane to compete at largest equestrian triathlon in U.S.
0 Comments
Share this
{{featured_button_text}}
1 of 4 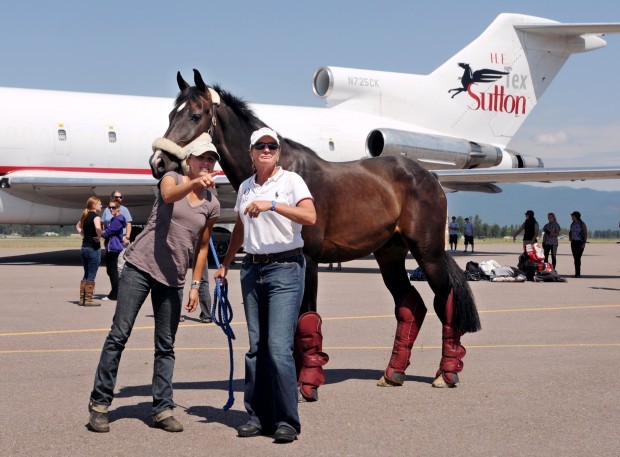 Four-time Olympian Karen O'Connor, right, gets directions to the proper horse trailer as she leads one of 19 horses off a Boeing 727 jet at Glacier International Airport in Kalispell on Tuesday following a cross-country flight from Baltimore. Five hundred horses are expected to compete this week in The Event at Rebecca Farm, the largest equestrian triathlon in the United States. 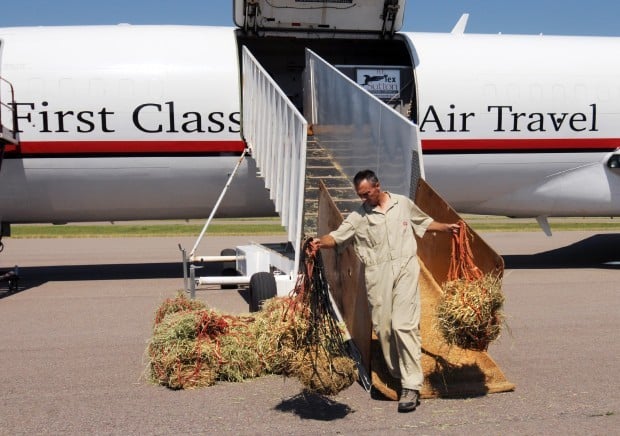 The high-dollar horses get very special treatment aboard Air Horse One. 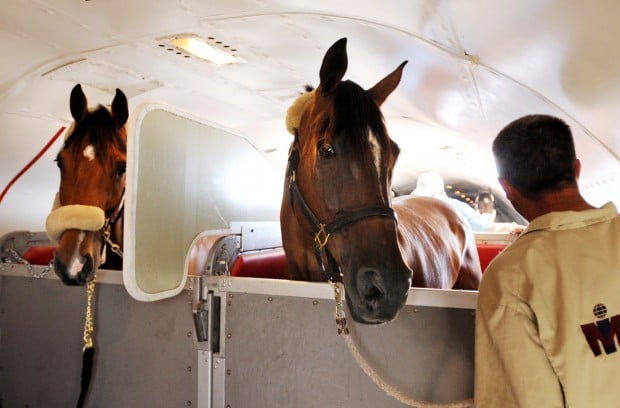 All 19 horses are from the Eastern Seaboard and flew non-stop from Baltimore. 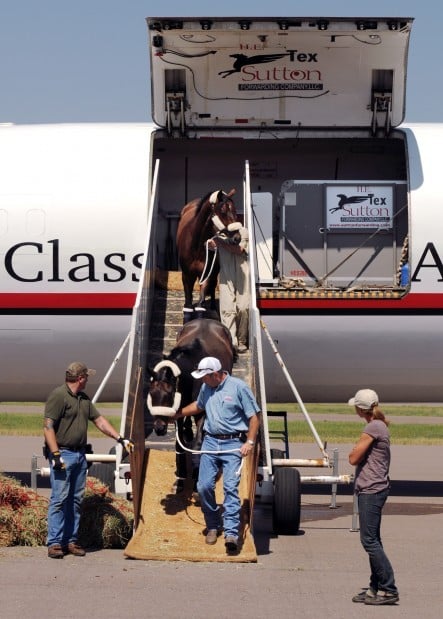 Mike Payne, center foreground, hauled the ramp used to unload the horses all the way from Lexington, Ky., a 2,160-mile one-way trip.

KALISPELL - Air Force One didn't touch down here earlier this month after President Barack Obama canceled a planned vacation in nearby Whitefish.

So instead, on Tuesday, Kalispell got Air Horse One.

Like the president's Boeing VC-25, this Boeing 727 has carried an impressive list of passengers in its time: Cigar, the first racehorse to win 16 consecutive major stakes races (in the mid-1990s) since Triple Crown winner Citation did it between 1948-50, plus 17 of the last 20 Kentucky Derby winners, to name a few.

"We haul three-quarters of the Derby field," said Mike Payne, operations manager for H.E. Tex Sutton Forwarding Co., which owns the airplane, "so there's always a good chance we'll have the winner on board."

Tuesday's passengers, however, were horses of ... well, not a different color, necessarily, but of a different nature.

These animals arrived from the Eastern Seaboard to compete this week in The Event at Rebecca Farm, the largest equestrian triathlon in the United States and a selection trial for the 2012 London Olympics.

Nineteen horses and 14 riders and grooms - or, as Event organizer Sarah Broussard Kelly figured it, 104 legs - boarded the plane early Tuesday in Baltimore for the cross-country flight to Glacier International Airport.

It's the second year a group of horses and riders has flown in from the East Coast for The Event. Prior to that, it had been nearly half a century - 1962, at Pebble Beach, Calif. - since a group from back East had chartered a plane to transport them to a similar equestrian competition in the West.

"Racehorses fly non-stop," Kelly said, "but it had been almost 50 years since horses had flown east to west for this sport."

That speaks volumes for the strides The Event at Rebecca Farm has made in its 10 years, Kelly said - as well as to the dedication her late mother showed it.

The competition gets into full swing on Thursday and runs through Sunday.

"My mother wanted to create a world-platform event," Kelly said, "and this is her vision."

Rebecca Farm describes the sport of eventing as "an equestrian triathlon with historic military ties meant to replicate what a horse and rider would go through in the cavalry."

Dressage tests obedience and the harmony between horse and rider. Cross-country measures endurance, with horses running long distances at high rates of speed.

Show jumping tests precision, agility and technique while jumping over high obstacles, and wraps up the competition on Sunday.

The jumps at Rebecca Farm set it apart. Course builder Bert Wood and his team have designed jumps to look like massive trout, a moose, rattlesnakes and a steam train. For the 10th anniversary, they've added a Western town that looks like a movie set, with a sheriff's office, school and church.

The final jump sends horses and riders over the front doors of a saloon.

Four-time Olympian Karen O'Connor calls Rebecca Farm "the best venue I have ever been to in the world."

O'Connor was among the humans aboard Air Horse One on Tuesday, along with her horse, Veronica, a 16-hand, 8-year-old Holsteiner/Thoroughbred bay mare.

"It was a great flight," said O'Connor, who won a Silver Medal at the 1996 Olympic Games in Atlanta and a Bronze at the 2000 Games in Sydney, Australia. "It's always cold, though - they keep the temperature in the 40s. When you get that many horses together, it's a lot of body heat."

The 727 can hold 21 horses, "but three of the horses required first class," Kelly said. "They were bigger animals that needed bigger stalls."

The 19 on Tuesday's flight are a small part of the more than 500 horses that will compete at The Event at Rebecca Farm this week. The best eventing horses - ones with the potential of competing in the Olympic Games - can be worth up to half a million dollars, Kelly added.

The plane touched down in Kalispell just before lunch time, but it had already been a long day for O'Connor, Veronica and the rest of the passengers, who converged on Baltimore from everyplace from Canada to Florida for Tuesday's flight.

Air Horse One landed once, in Minneapolis, to refuel.

It was a bit of a longer trip for Payne, the operations manager for Tex Sutton.

Payne towed a special horse ramp for deplaning the animals behind a pickup truck from Tex Sutton headquarters in Lexington, Ky. - "2,160 miles," he reported.

Transporting eventing horses is easier than the racehorses that make up 80 percent of Tex Sutton's business, Payne said.

A couple of the eventing horses rebelled a bit at being taken from stalls on an airplane to stalls in the six horse trailers that lined up at Glacier Jet Center to transport the animals to Rebecca Farm, but most seemed to take it in stride.

And who could blame the two that didn't? They are athletes who train to replicate what their ancestors were called on to perform in the United States Cavalry - and how many of them, after all, were asked to walk onto Boeing jets and fly across America?

Watch Now: Why are there more floods?

Best horses, riders in world ready to compete at The Event in Kalispell

KALISPELL - Imagine if tickets were free to watch an NFL divisional championship playoff game, and every fan and spectator could watch the act…

The Event at Rebecca Farm is Thursday through Sunday from 8 a.m. to 5 p.m. each day, with dressage on Thursday and Friday, cross-country on Fr…

Four-time Olympian Karen O'Connor, right, gets directions to the proper horse trailer as she leads one of 19 horses off a Boeing 727 jet at Glacier International Airport in Kalispell on Tuesday following a cross-country flight from Baltimore. Five hundred horses are expected to compete this week in The Event at Rebecca Farm, the largest equestrian triathlon in the United States.

The high-dollar horses get very special treatment aboard Air Horse One.

All 19 horses are from the Eastern Seaboard and flew non-stop from Baltimore.

Mike Payne, center foreground, hauled the ramp used to unload the horses all the way from Lexington, Ky., a 2,160-mile one-way trip.