KALISPELL — As Sarah Schmidt skinned beyond the boundary line of White Pass Ski Area in Washington with her two friends, they stopped at the peak that overlooked Mount St. Helens, Mount Adams and Mount Rainier on an unusually clear January day.

There was about 10 inches of fresh powder and the avalanche forecast was “considerable” that day, a gray area on the danger scale in the forecasting world, which is usually associated with uncertainty in the snowpack.

As Schmidt and her two male ski partners took in the view, she realized they hadn’t discussed where they were skiing. They could descend into a steeper, cliff area where a nearly 800-foot vertical bowl lay beneath, or they could ski in a gentler zone where sparse trees replaced craggy cliffs.

One member of the group was interested in the more aggressive terrain, but Schmidt voiced her concerns about the sketchy avalanche conditions, and they chose the safer route through the trees.

“We hadn’t talked about a plan, and I was the one to initiate the discussion,” she told the Flathead Beacon.

Not every backcountry group effectively communicates the way Schmidt’s did, even as experts emphasize the importance of open dialogue in backcountry settings while also highlighting the gender imbalances that can exacerbate the problem. But now there are growing efforts to address those issues through education, especially women-only classes, both nationwide and in Montana.

Schmidt was traveling that day with two people 10 years older who had more backcountry experience, and she hadn’t yet taken an Avalanche Level 1 Course at that point, all of which relegated her to junior decision-maker status. But her decision to step forward may have prevented a dicey situation. Many other people without formal avalanche education don’t have the confidence to speak up, however, and if they do, their voices often aren’t heard.

“It’s one of those things where people need to talk, and that’s why these classes are empowering,” Schmidt said. “They give you a platform to speak up.”

Intimidation can play a role in backcountry skiers’ reluctance to take a course, especially women who are trying to break into a traditionally male-dominated sport. Some women who are new to the backcountry are hesitant to take avalanche classes in fear of being a lone woman in what they think might be a sea of testosterone and inflated egos at an entry-level Level 1 course.

“When I first got into backcountry skiing in my 20s, I was relying on friends and was not engaging myself,” Friends of the Flathead Avalanche Center (FOFAC) Education Coordinator Meg Killen said. “I was intimidated to take the classes.”

Whitefish Mountain Resort and The Patrol Fund, a fundraising program for avalanche courses, started hosting the Ladies Only Level 1 Avalanche Course in 2017, partly because research in recent years suggests that women-only groups in the backcountry result in better decision-making. The popular classes consistently fill up, drawing both locals and out-of-staters like Schmidt.

“Part of why we like to provide women’s courses is the dynamic is different in decision-making,” said Jenny Cloutier, a Level 1 avalanche instructor and the former FOFAC Education Coordinator. “It’s actually been shown that mixed-gender groups are the most dangerous groups, and we wanted to provide a venue for women to learn and kind of have some of those barriers broken down.”

In research compiled by The Avalanche Review editor Lynne Wolfe in 2004, she interviewed four women snow professionals to compare group decision-making dynamics between women’s and mixed-gender groups. The women generally concurred that decision-making depends on the individuals in the group. However, they admitted that they exhibited riskier behavior in mixed groups and tended to ski in more conservative terrain in women’s groups. Some of those interviewed found that all-women’s groups make decisions by consensus rather than by following a single leader.

Wolfe also noted in her own observations from her experience teaching women-only classes that they are “adamant that their voices are better heard in all-women’s groups and they are more willing to experiment in those groups.” Those decision-making dynamics help determine whether or not a group is caught in a heuristic trap, which occurs when people ignore obvious hazards and are misled by rules of thumb that give inaccurate representations of danger.

Engineer and avalanche educator Ian McCammon defined those rules of thumb as heuristic traps. He determined in his published research that there are six widely used heuristics in our daily decisions: familiarity, consistency, acceptance, the expert halo, social facilitation and scarcity.

For example, the acceptance heuristic, or the desire to impress or gain respect, is often a factor in mixed groups and causes men to access riskier terrain in an attempt to gain acceptance from the women in the party, according to McCammon.

The expert halo creates another heuristic trap, in which an informal leader ends up making critical decisions for the party. Studies have shown that consensus decisions lead to smarter decisions, while the perceived “expert” is more likely to lead a group into avalanche terrain.

Whitefish psychologist and avalanche educator Sara Boilen says the loudest, fastest person in a party is often the person who makes decisions in groups. But if groups make decisions based on consensus, women or anybody prone to being quiet will have more opportunity to speak.

“If you assign a female to that role, you are empowering her,” and putting her in a position where her “voice is gonna be heard,” Boilen said.

Women-only classes lend empowerment to students who may have previously depended on others. In a male-dominated field, women often go into the backcountry with a male partner. Cloutier has noticed that in some circumstances, that male partner is the one digging snow pits, determining the snowpack’s safety and making the decisions.

“There’s the idea that women are less likely to speak up because they don’t want to rock the boat and they want to be included or asked to go out again, or maybe there’s an expert halo with the gentleman they are traveling with,” Cloutier said.

Cloutier and Killen both look forward to the all-women’s courses and agree that they are the most fun classes to teach. They notice a team-building component in the ladies’ course that isn’t as evident in mixed-gender groups.

Killen notices a higher level of comfort in the women-specific classes and sees more discussion and dialogue among the group.

“There’s something joyous about these classes,” Cloutier said. “There’s just a great feel to them. I think it’s to do with that empowerment and (to) share that same passion and have mentors that are also women.”

“Because this field itself is heavily weighted toward men, there’s a lot more male avalanche professionals and I think it’s really great for these folks to also have their instructors be women as well,” Cloutier said.

Growing up in Kalispell, Cloutier says there was an absence of women in the avalanche-safety field and doesn’t recall any women forecasters. But a lot has changed in the Flathead Valley in the last 20 years.

Today, women are running several avalanche education programs, including FOFAC and The Patrol Fund. Keagan Zoellner was appointed the Whitefish Mountain Resort Ski Patrol Director this season, a role in which she oversees a balanced male and female crew, a rarity among ski patrols.

“We have a lot of qualified women in the field,” Cloutier said.

But Cloutier says the Flathead is also home to plenty of men who taught her a lot about avalanche education and led to positive collaborations.

“There are some incredible men that live here,” she said.

More education gives people greater confidence and allows them to be more active in group dynamics and decision-making.

“It was a really positive and engaging learning environment, and we talked about it every day,” said Madison Browning, a local student in the Ladies Level 1 Avalanche Course.

“We all asked questions, and honestly if dudes were present, we probably wouldn’t have felt comfortable asking (them). There was a lot of talk and laughter about how the dynamics of the course would have been different.”

Browning, who says she’s been in questionable mixed-gender backcountry groups in the past, is now pickier about who she recreates with. Following the ladies-only course, she feels more confident in making decisions instead of solely following someone else’s lead.

“I definitely learned that I will only go out with people that have a similar risk tolerance as me, and we can have an open conversation before starting the tour (and) that we will have open communication the entire time,” Browning said. 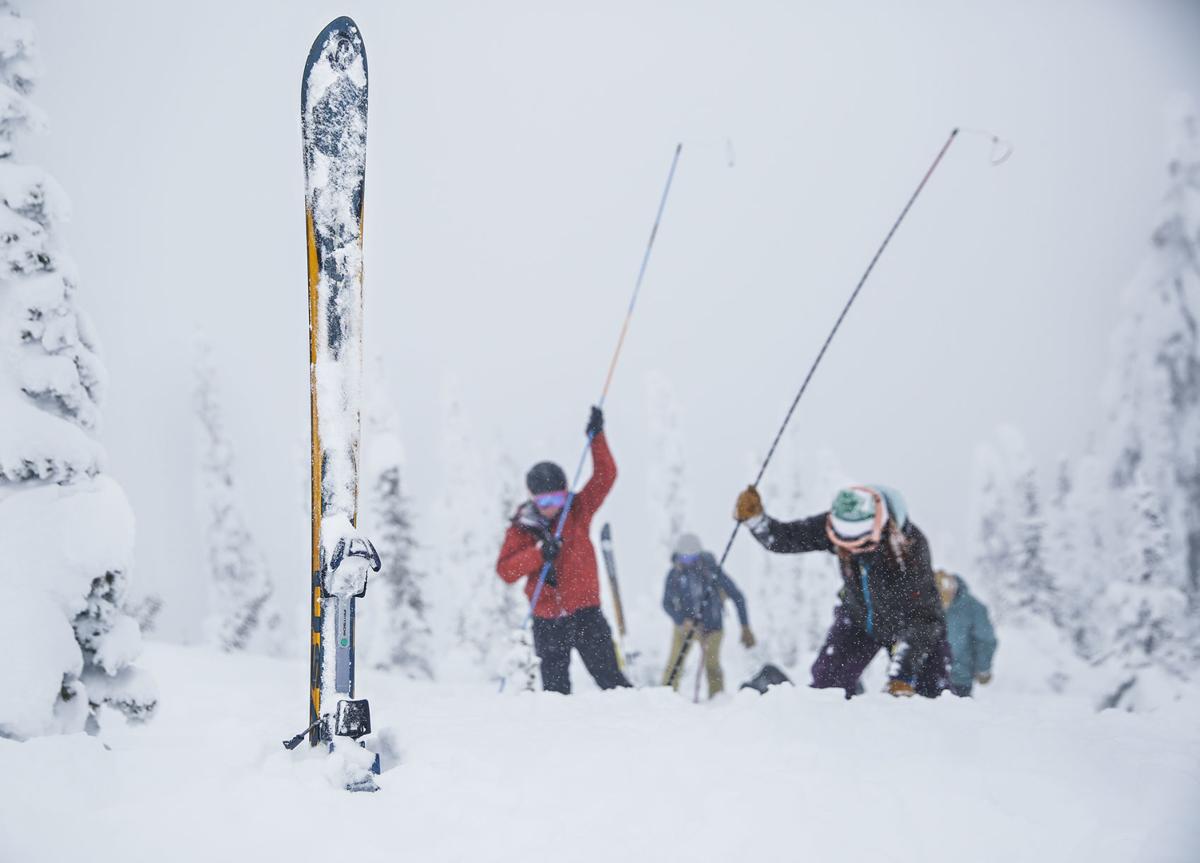 Students probe the snow near a loose ski during a ladies level one avalanche course at Whitefish Mountain Resort on Jan. 31. 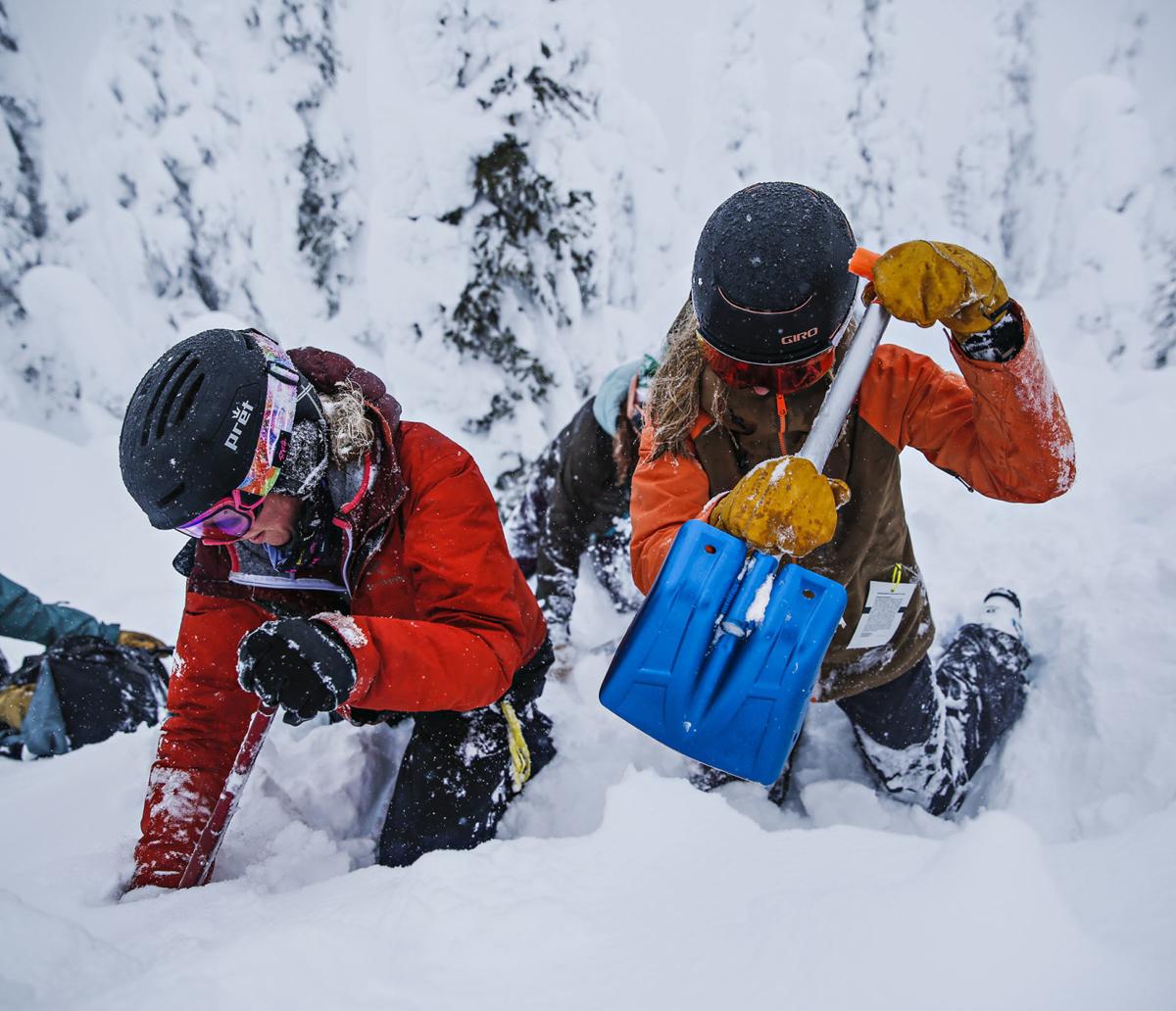 Madison Browning, left, and Sarah Schmidt practice their digging speed and technique during a ladies level one avalanche course at Whitefish Mountain Resort on Jan. 31. 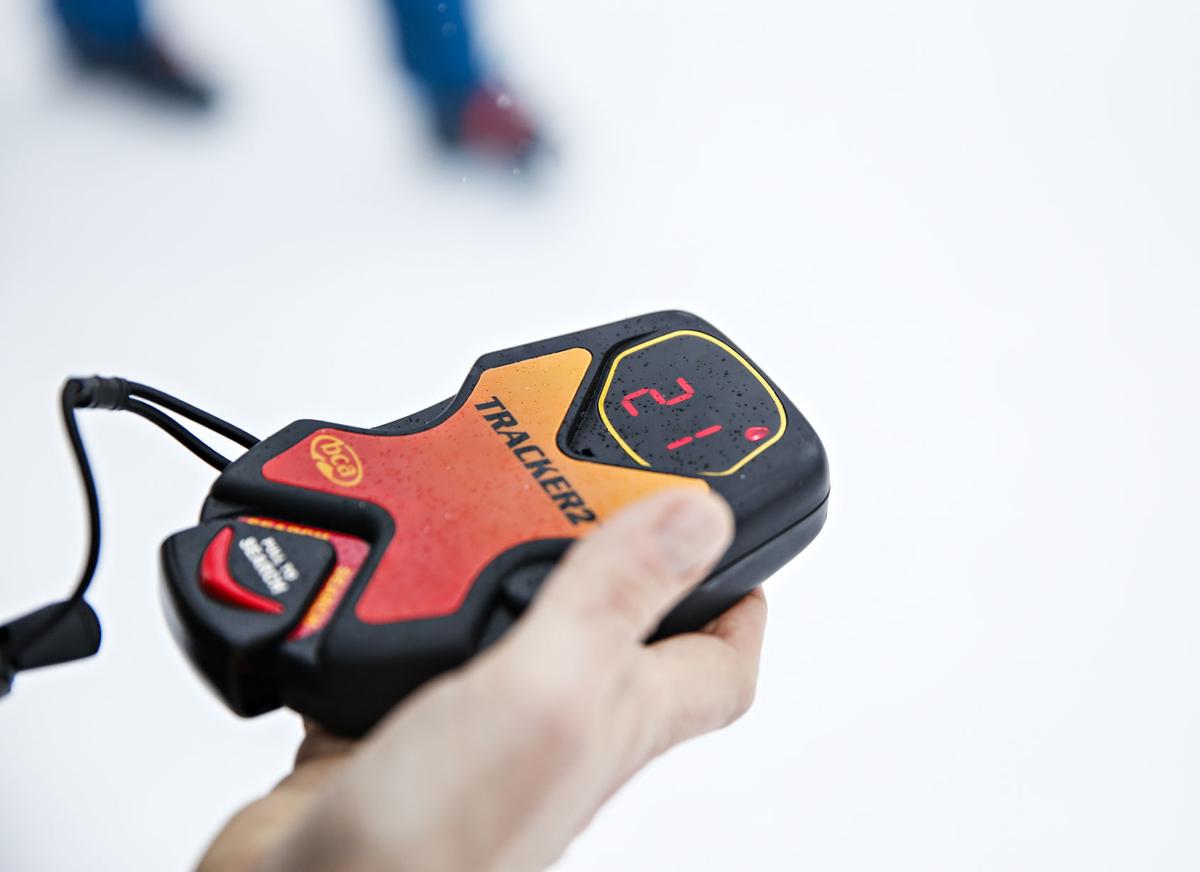 A student tests the range of her avalanche beacon during a ladies level one avalanche course at Whitefish Mountain Resort.