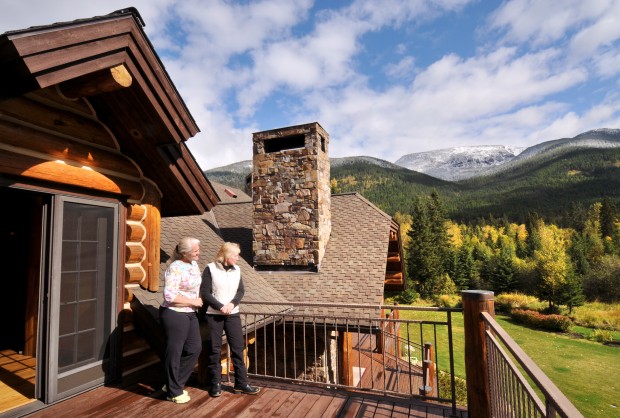 Caretaker Deanna McAtee, left, and Missoula real estate agent Theresa Mondale drink in the view from an upstairs deck at this log mansion for sale near Bigfork. Three Eagles Mountain in the Jewell Basin looms over the valley. 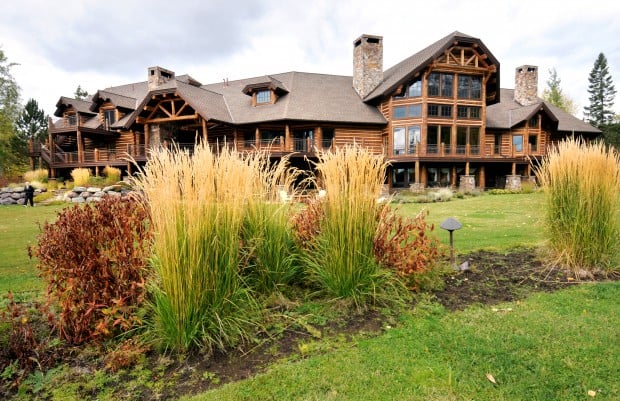 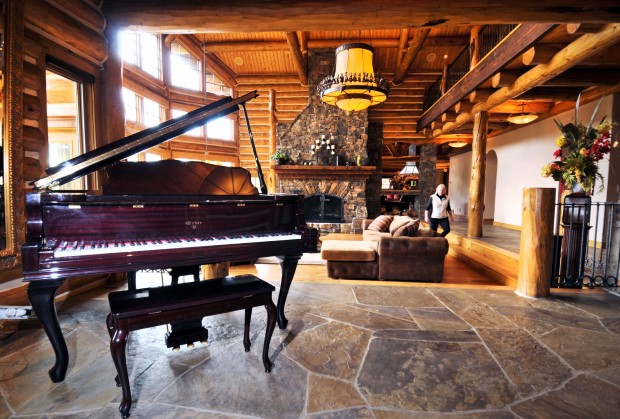 A grand piano sits in the wing of the great room in this sprawling home near Bigfork. The asking price tag for the home is $10.5 million, and it comes fully furnished. 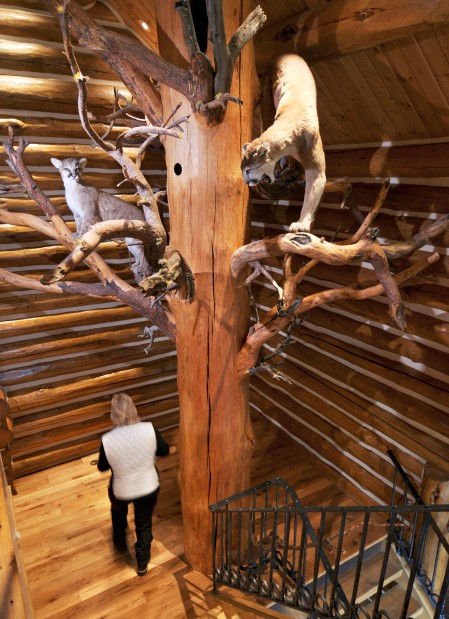 Written by VINCE DEVLIN Photographed by MICHAEL GALLACHER of the Missoulian

BIGFORK – Her name’s not on the deed, but this was Deanna McAtee’s home for three years.

What a place to be able to hang your hat.

There are nine rock fireplaces in the log mansion, so many that both of the his-and-hers bathrooms in the master suite each have one. So, of course, does the master bedroom, where the curtains on the windows are made of leather.

More than 100 artisans and craftsmen were employed during its construction a decade ago, including ones who baked their original artwork into bathroom tiles and another who custom-made three Battle of the Little Bighorn-themed chandeliers for the house.

The largest and most elaborate chandelier, in the sunken great room, cost more than a lot of entire homes do – $375,000.

There are five bedrooms and seven bathrooms in its 14,000 square feet of living space. That figure doesn’t include three pantries or any of the closet space that adds another 3,000. A six-car garage in the lower level – and, in case that’s not enough, another four-car garage on the main floor – help bring the total under-roof square footage to 21,000.

And that doesn’t count the 2,800-square-foot, three-bedroom, two-bath guest house, also made of logs, just across the creek that runs through the property’s 73 acres.

Back in the main lodge there’s a mirrored exercise room, a surround-sound theater and bar, and 5,000 square feet of decks. Four master panels located throughout the house can control every light, every window shade, and open and close every garage door.

There’s a doggie shower in the laundry room, complete with a dog lift to raise your pet in the air and wash its belly more easily. A stuffed mountain lion and her cub stare down from limbs of a tree that rises next to a staircase that goes to a second-floor library.

“Honestly, it’s a lonely place with one old lady walking around in it,” says McAtee, who was its caretaker. “It needs a wonderful family.”

Deer Creek Ranch, located about six miles northeast of Bigfork, isn’t the most expensive property on the market in western Montana.

That distinction falls to a 24,000-square-foot stone-and-copper mansion on Flathead Lake that comes with its own island and a $78 million price tag. The Shelter Island estate is offered by a Beverly Hills real estate firm. It doesn’t even show up on multiple listing services in western Montana.

Theresa Mondale of United Country Real Estate in Missoula, which now has the Deer Creek Ranch listing, says she located three other MLS properties in the Flathead priced a little more than hers, and a ranch in the Bitterroot for sale for $17 million.

But it’s still up there. Mondale says the high-end real estate market is starting to come back after suffering, along with everything else, during the recession.

“Yes, people are starting to realize the end of the world is not coming,” Mondale says. “I routinely have high-end potential buyers contacting me.”

McAtee says the attorney-owner of the home, who has had it for sale for more than two years, recently switched the listing to United Country for its ability to market the property worldwide. Since United Country issued a news release last week about Deer Creek Ranch’s availability, saying the main house was listed as one of the top 10 log homes in America by HGTV, Mondale says she has had a “flood” of inquiries from Hong Kong, Europe, Canada, Alaska and Texas.

The typical potential high-end buyer, she says, will have done their homework on what is likely to serve as a second, third or even fourth home for them. The $38,000 in annual property taxes won’t faze someone who can afford a $10.5 million home, McAtee says.

Potential buyers may not be specifically looking to purchase in Montana, but rather, be looking for a retreat that suits them.

Usually, Mondale says, they’ll have a specific property in mind, arrive by private jet to take a firsthand look, and leave without inspecting any other local properties.

At Deer Creek Ranch, they’ll find themselves at the base of Three Eagles Mountain and the famed Jewell Basin, with the majestic views they provide. When prospective buyers come into the rock-floored entryway, they may notice one of the large stones was cut into the shape of Montana.

Out the front windows, they may see deer, elk, bear or moose; a conservation easement on the property protects corridors the animals traverse.

The log mansion was built in 2002 by an Atlanta businessman and his wife, who are friends of McAtee’s. It was his dream home, McAtee says, designed by a nephew who is an architect as a thank you for his uncle helping him through college.

The guest house went up first, and the owners lived in it during the two years it took to construct the huge main house.

When they had to sell in 2008, McAtee, a former mortgage broker, arranged for a business associate of hers to buy it.

The new owner, an Omaha, Neb., attorney, already owns multiple homes, and purchased this one as an investment, she says.

“He hasn’t spent more than 10 to 12 days in it in four years,” according to McAtee, who became the live-in caretaker for a property where no one else lived.

In other circumstances, a caretaker most likely would have lived in the guest house, McAtee says, but with an absent owner, she took up residence in the main house.

She could have chosen the wing that contains what’s known as “the apartment,” two bedrooms that share their own living-dining-small kitchen area and one of the house’s many bathrooms.

Instead, she moved into a guest suite on the lower level that features, among other things, a secret passageway into one of the home’s two panic rooms.

Nearby is a gallery built to house the first owner’s original bronzes; McAtee filled it with her own plants. (Upstairs on the third level, the library’s shelves now sit empty, but once held a collection of original-edition books written entirely by Montana authors.)

Eventually, McAtee says with a laugh, she realized that the amazing master suite was just as available as all the other bedrooms, and moved upstairs into it, dividing her winter and summer wardrobes between the walk-in closets in the separate his-and-hers master baths.

Taking care of such a large home and property was a lot of work, McAtee says.

“I was here a year and a half before I ever sat down with a cup of coffee on the deck,” she says. “If I ever write a book, it’s going to be called, ‘Things I Learned on a Lawnmower.’ ”

Still, with the run of the place and the owner’s OK, McAtee says she hosted family Thanksgivings and Christmases, and entertained 55 people on her mother’s 80th birthday, putting up 27 of the guests overnight with ease.

“There’s so much room, you can do whatever,” she says.

On Fourth of Julys, she’d have friends over to watch the fireworks display put on by “neighbors” Maury Povich and Connie Chung, who own a vacation home nearby.

McAtee turned the management of the Deer Creek property over to her daughter in January and embarked on a six-month mission in Africa, where she volunteered at a medical clinic and contracted malaria five times.

“I thought of my days at Deer Creek often while I was in Kenya,” McAtee goes on. “I was so blessed being able to live here for three years. We Americans take so much for granted. I had to apologize to God for not being thankful enough.”

McAtee hopes to return to Africa as a volunteer again, but is helping Mondale market the house its former caretaker knows so well.

She predicts the next owner will be someone of “rock-star quality” who is seeking the end-of-the-road privacy and security Deer Creek Ranch provides.

“This house is going to fit somebody like a glove,” McAtee says. It comes fully furnished. McAtee says there is $3 million invested in rock work alone, and estimates it would cost nearly $15 million to build something identical today.

“My loyalty is to the home,” she says. “It needs a family in it, not a single old lady.”

Lines form as residents flee from volcano in Spain

Lines form as residents flee from volcano in Spain

Hundreds of homes destroyed as lava pours from volcano in Spain

Hundreds of homes destroyed as lava pours from volcano in Spain

SALMON LAKE – Just before 10 a.m. on a weekday morning, Jim Teafoe eased the boat from the docks and set his direction across the channel. Wit…

ROLLINS – You’re all evidently pretty savvy real estate buyers. Since none of you bit on the initial price for a home near Rollins that’s been on the market since 2012, the asking price has tumbled by nearly 24 percent.

Caretaker Deanna McAtee, left, and Missoula real estate agent Theresa Mondale drink in the view from an upstairs deck at this log mansion for sale near Bigfork. Three Eagles Mountain in the Jewell Basin looms over the valley.

A grand piano sits in the wing of the great room in this sprawling home near Bigfork. The asking price tag for the home is $10.5 million, and it comes fully furnished.