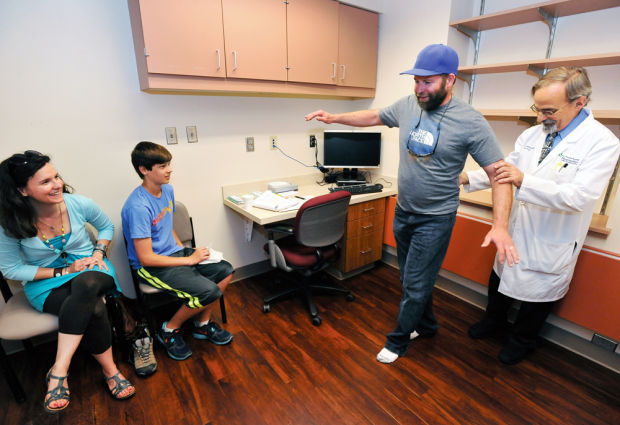 Logan Johnson walks on his heels under the watchful eye of his neurologist Dr. Jeffrey Mosser, his wife Janine, and son Korbin in Billings on June 11. 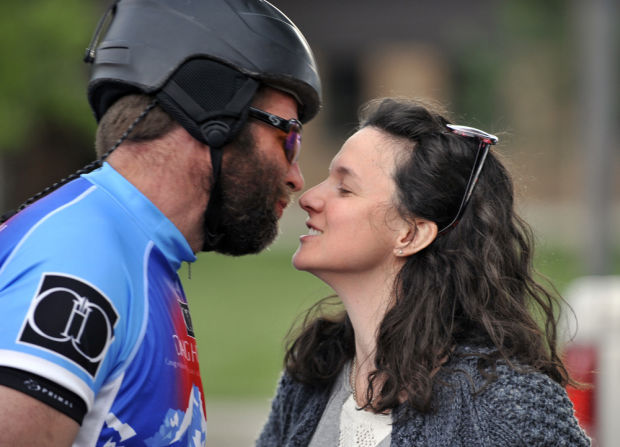 Logan Johnson gives his wife Janine a kiss as he works with a biking crew from Eagle Mount in Billings on June 10.

Logan Johnson walks on his heels under the watchful eye of his neurologist Dr. Jeffrey Mosser, his wife Janine, and son Korbin in Billings on June 11.

Logan Johnson gives his wife Janine a kiss as he works with a biking crew from Eagle Mount in Billings on June 10.

BILLINGS – A 13-year-old boy watched in horror as his father, a 20-year veteran backcountry skier, rolled like a snowball down the steep terrain of Twin Lakes Headwall, a late-season ski area on the Beartooth Pass.

Korbin Johnson and his two younger brothers, Gunnar and Oliver, were on a ski outing with their father, Logan, when Logan stumbled, rolled and came to an abrupt halt against some rocks.

The children’s mother, Janine, was oblivious. She was en route up the mountain with Grandma to play the role of spectator and cheerleader.

Logan, a lean and muscular, 160-pound, 5-foot, 10-inch athlete, lay limp in the snow with skis tangled. The “Screamin’ Demon,” as he was nicknamed at the Stillwater Mine where he worked, was lifeless.

“I was really scared,” Korbin said. “I didn’t know how bad it was.”

Within three hours, the youngster would discover the severity of his father’s fall. The elder Johnson was flown to St. Vincent Healthcare in Billings where he remained in a coma for nearly eight weeks.

Johnson doesn’t remember skiing with his sons that day – June 5, 2012. The only thing he recalls about that 9 a.m. outing was sliding and thinking, “This isn’t good.”

He suffered brain damage, a collapsed lung and a cracked tailbone.

He underwent a three-hour decompressive craniotomy during which Dr. Richard Teff, a neurosurgeon, removed a section of his skull to relieve pressure caused by a blood clot.

“When Logan arrived he was in a deep coma and had a severe traumatic brain injury. His clot was large and his brain was very swollen,” Teff said.

“The only chance for his survival was to get the clot out and make some room for the brain to swell. It needed more room than his skull could accommodate.”

Teff, a neurosurgeon who treated veterans in the Iraq War, said the craniectomy is controversial, but in the right cases, it can save a life.

“I saw its success many times when I worked with injured soldiers during the Iraq War,” Teff said.

One of the first signs that he was going to live came on July 5, 2012. He used his right hand and fingers to sign the phrase, “I love you,” when Janine asked him to. It was a pivotal moment in his recovery and exactly what the neurosurgeon had been looking for – purposeful response to a command. It indicated brain function, hearing, interpretation and coordination.

Teff operated on Johnson again on July 12 to replace the section of his skull that had been removed to accommodate the swelling.

Johnson spent the next five months rotating in and out of St. Vincent Healthcare; Craig Hospital in Denver, which specializes exclusively in spinal cord injury and brain injury rehabilitation; New Hope Rehabilitation Center in Billings; and a long-term care facility in Billings.

“I always had a peace that he was going to pull through and it would work out,” said his wife, Janine, 36. “I never felt like he was done with his life.”

In time, Johnson, 37, enrolled in speech, occupational and physical therapy. Each week brought noticeable improvements. Some were readily visible; others were not. He moved from his bed to a wheelchair, to a walker, then to his own two feet.

A year after the injury, Johnson credits his family, his medical team, his faith and his stubborn self-determination for his “remarkable recovery.”

His short-term memory, response time, balance and speech are impaired by his brain injury. His energy supply is more quickly depleted than it used to be and his attention span is abbreviated. He’s restless and easily bored. He cannot legally drive and has not been able to return to his job at the mine.

“I wish I had more endurance and time for my family,” Logan said. “If I want to do something with my family, it has to be planned out long in advance.”

Teff periodically checks on a shunt in Johnson’s brain, and said he’ll continue to improve for years to come.

Despite the challenges, there are multiple victories. His long-term memory and sense of humor are intact. Johnson, an avid mountain biker, recently rode nearly 10 miles with Eagle Mount, an organization that provides therapeutic recreational opportunities for people with disabilities. He made the trek without the use of adaptive equipment. He put a tally mark in the victory column.

He’s also been jogging, horseback riding and swimming – all with Eagle Mount. And, he’s gone skiing.

He recently received his archery tag for elk later this fall outside Red Lodge along with his brother, Alex.

Last week, with the help of Montana Vocational Rehabilitation, he landed a four-hour-a-day job. He and Janine will saddle, bridle and groom horses in addition to cleaning the barn and performing some light yard work for a couple in Luther. Another victory.

“We are blessed,” Janine said.

The skiing accident is now a distant memory.

In an odd twist, Johnson said, the accident has brought the family closer. He relies on his three boys – Korbin, 14; Gunnar, 11; and Oliver, 9 – to help with chores he used to do and to help him. He also relies on Janine for transportation. It runs counter to his independent streak, but he’s adjusting.

Last week, the family took in the new Superman movie, “Man of Steel.” It was a mini test of Johnson’s ability to sit through a 143-minute movie. The outing received rave reviews from Janine, who said it went great.

It was the first movie the entire family has attended since the accident.

To illustrate the newfound feeling of connectedness to his family, Johnson draws on the lyrics 1978 pop hit, “Reunited,” by Peaches and Herb.

“Reunited and it feels so good,” he said, clapping his hands and smiling.