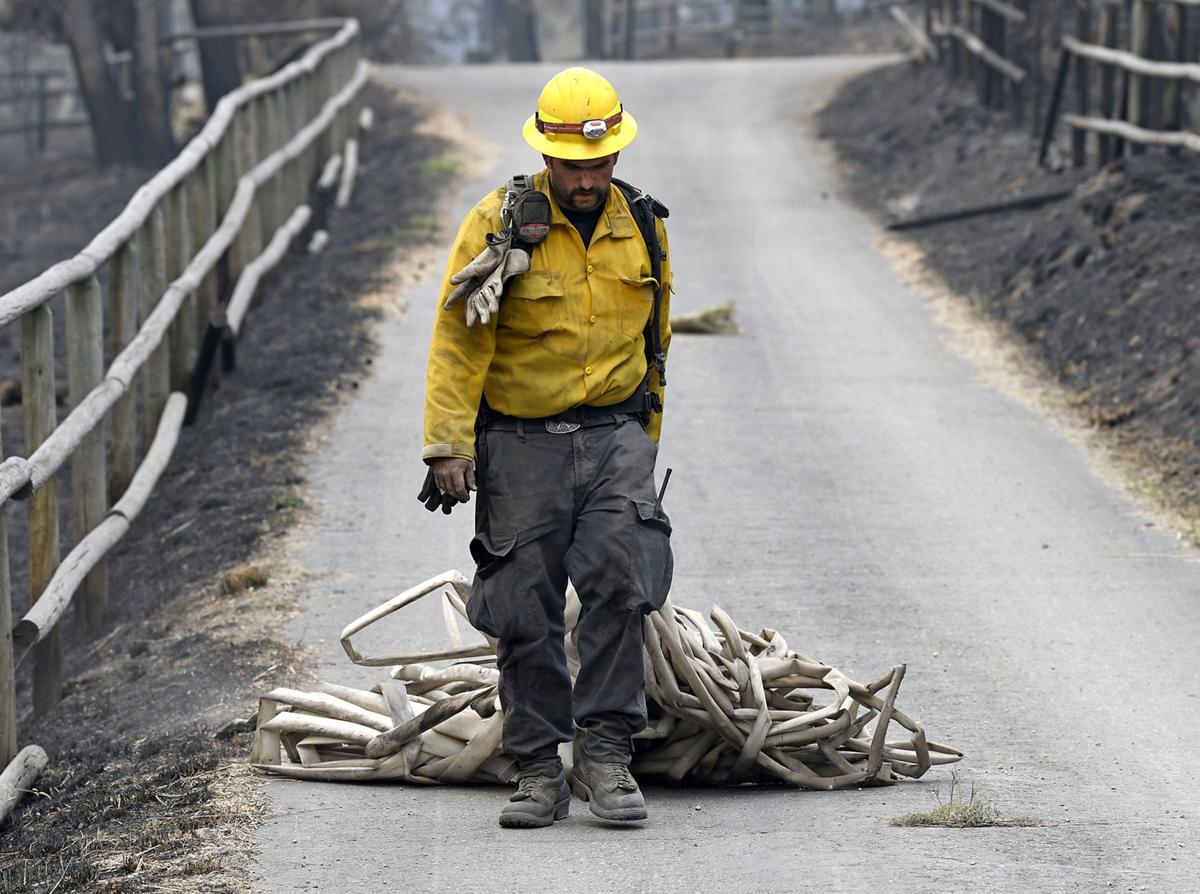 Keith Hernandez, a firefighter with Volcano Creek Enterprises, Inc. from Foresthill, California, drags burned cotton fire hose down a driveway off Folsom Road near Lolo on Thursday where the Lolo Peak fire burned through the area recently. 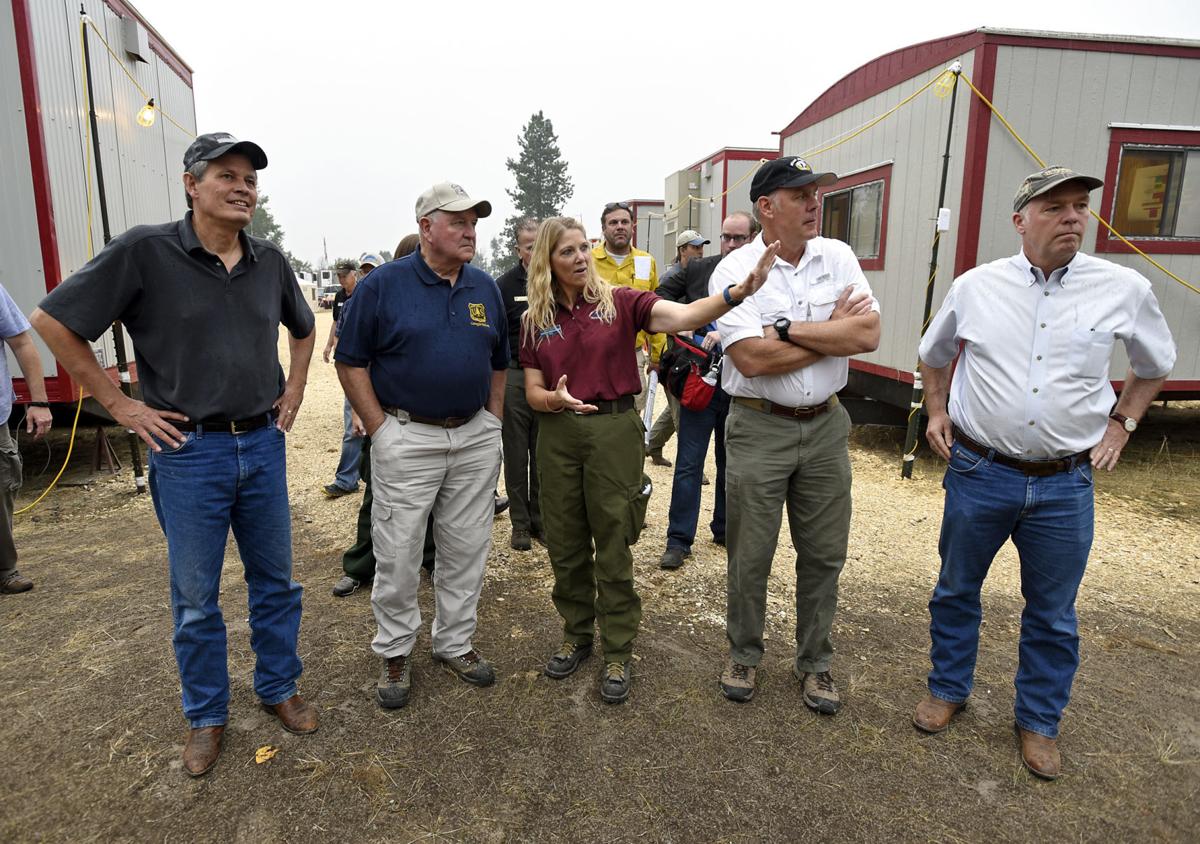 Jeannette Dreadfulwater, a public information officer at the fire camp for the Lolo Peak fire, gives a tour of the camp to U.S. Sen. Steve Daines, R-Mont., Secretary of Agriculture Sonny Perdue, Secretary of the Interior Ryan Zinke and U.S. Rep. Greg Gianforte, R-Mont., from left, on Thursday near Florence.

FLORENCE — Two federal cabinet secretaries joined two-thirds of Montana’s congressional delegation at the Lolo Peak fire base to decry the effect of lawsuits on firefighting.

“We can’t do anything about the weather, but we can do things about forest management that make sense so we can diminish forest fires in the future,” agriculture Secretary Sonny Perdue said after a closed briefing with fire incident commanders on Thursday. He was joined by Interior Secretary Ryan Zinke and Montana Republican Sen. Steve Daines and Rep. Greg Gianforte in arguing that litigation was keeping forests in an unhealthy state.

Perdue, whose department oversees the Forest Service, noted that fire spending has grown from 15 percent to 55 percent of the agency’s annual budget. He said the agency needs to get away from emergency funding of fires to an ongoing funding format. That would give its personnel more resources toward efforts to reduce hazardous fuels in the forest, such as the Stonewall Vegetation project near Lincoln that’s currently blocked by a lawsuit and burning in the Arrastra Creek and Park Creek fires.

“That’s because of litigation that has stopped fire management,” Perdue said “We talked about Stonewall; that’s a good example of what’s happened. That’s what’s evolved into the 55 percent because you couldn’t do some of these things that you wanted to. It is a cause-and-effect situation.”

Gianforte said the federal Equal Access to Justice Act, which allows those who successfully sue the government to recover their legal costs, needed reform to reduce “frivolous lawsuits.”

Forest Service officials in Missoula could not confirm that claim on Thursday. However, U.S. Sen. Jon Tester had to retract a similar claim in 2015 when the Montana Democrat initially said every logging sale was being litigated, and then restated to say half of 2014’s awarded timber volume was under litigation. An examination by the Washington Post found that 14 percent of the 97 sales had active litigation and only four were enjoined from any logging.

Alliance for the Wild Rockies director Michael Garrity, whose organization sued the Forest Service over the Stonewall project, said AWR was actively litigating three timber projects and following a federal appeal of a fourth. There are at least 30 Montana timber projects currently listed on Forest Service websites.

“Democracy only works if you have citizen oversight of the government,” Garrity said. “If they don’t like us suing, there’s a simple solution. Mr. Gianforte and the others need to oversee the Forest Service and ask them why they aren’t following the law.”

Zinke, who was re-elected to Montana’s lone congressional seat last November before joining the Trump Administration in the Interior Department, said front-line government workers were too burdened by micromanagement and bureaucracy to get out in the field.

“We need more resources on the front line, to give them the flexibility they need and get rid of the lawsuits so they can do their jobs” Zinke said. “That’s where we can focus on near-term gains.”

Tester also visited the fire on Tuesday and discussed efforts to end “fire-borrowing” within the Forest Service budget that strips forest management dollars away to pay for wildfire activity. While Tester called for legislation that would cover wildfires more like hurricanes or floods, Perdue said he looked for passage of the Resilient Federal Forests Act authored by Rep. Bruce Westerman, R-Arkansas and a related bill by Sen. Mike Crapo, R-Idaho.

For the second time in two weeks, western Montana wildland firefighters returned to work on Thursday knowing one of their own died in action.

U.S. Sen. Steve Daines believes that the Affordable Care Act still needs to be repealed and replaced. But in the meantime, he does not support…

Keith Hernandez, a firefighter with Volcano Creek Enterprises, Inc. from Foresthill, California, drags burned cotton fire hose down a driveway off Folsom Road near Lolo on Thursday where the Lolo Peak fire burned through the area recently.

Jeannette Dreadfulwater, a public information officer at the fire camp for the Lolo Peak fire, gives a tour of the camp to U.S. Sen. Steve Daines, R-Mont., Secretary of Agriculture Sonny Perdue, Secretary of the Interior Ryan Zinke and U.S. Rep. Greg Gianforte, R-Mont., from left, on Thursday near Florence.