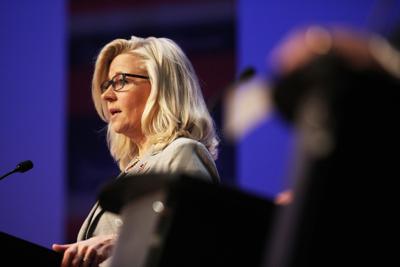 The congresswoman also performs better among newer residents of Wyoming and slightly better among younger people.

Cheney’s approval rating among women is roughly 10 points higher than it is among men, according to the Star-Tribune poll released earlier this month. On the flip side, six in 10 women disapprove of the congresswoman compared to 72% of men.

The results were similar when respondents were asked who they’d vote for if the primary were held today, with 57% of men saying they’d vote for Hageman and 47% of women. Cheney flipped those numbers — 26% of men chose the congresswoman compared to 34% of women.

“The question is, why are Republican men more upset with Cheney than Republican women?” said Cathy Connolly, D-Laramie, a state representative since 2009 and a professor of gender and women’s studies at the University of Wyoming.

“Of course we don’t really know why,” she said. “Certainly we get the sense Republicans and particularly Republican men feel very betrayed by her, and it’s possible women on the other hand are looking more at the bigger picture — including her doing the right thing.”

Who would you vote for today?
Infogram

The poll, conducted for the Star-Tribune by Mason-Dixon Polling & Strategy, surveyed 1,100 registered Wyoming voters likely to participate in the Republican primary, resulting in a margin of error of plus or minus 3%, according to Brad Coker, Mason-Dixon managing director. Of the respondents, 47% were women and 53% were men.

While the Cheney-Hageman race is one of the nation’s most closely watched, this is the first independent, public, in-state poll to be conducted. It was performed from July 7 to July 11 — shortly after early voting began here.

The poll found that Hageman has a 22-point lead over Cheney among voters who plan to participate in the Republican primary.

Stephanie Murray voted for Cheney in the past. But the 41-year-old Wyoming native says she doesn’t plan to vote for the congresswoman again. While she says she understands that Cheney had to pick a side when it comes to Trump and Jan. 6, Murray believes the congresswoman chose the wrong one.

“I don’t care for the decisions she made,” Murray said.

Included in the poll were registered Democrats who plan to participate in the Republican primary, which is possible in Wyoming because same-day voter registration changes are permissible. Mason-Dixon Managing Director Brad Coker, who administered the poll, believes the inclusion of Democrats helped create the gender gap between the two candidates.

“By bringing in crossover Democrats, who are disproportionately female, that pumps up the female number,” Coker said.

The gender gap between Cheney and Hageman voters “would probably be there, but it wouldn’t be as pronounced” if Democrats had not been included, Coker theorized.

Trump also appears to have a tighter hold on Wyoming men compared to Wyoming women. The former president’s endorsement makes one-fourth of women more likely to vote for Hageman compared to 34% of men.

The poll results were also broken down by age. Hageman drew greater support from people age 50 or older.

Notably, age does not appear to have a significant impact on Cheney’s disapproval ratings, while gender still does.

“With it being Hageman you don’t have your basic kind of sexism” compared to if a man was running against Cheney, Connolly said.

In Wyoming elections, a candidate’s length of residency frequently comes up. In fact, Hageman stresses that she’s a “deep-rooted” and “fourth-generation” Wyomingite. Cheney, meanwhile, has been attacked as a “carpetbagger” throughout her political career here. While her family has deep roots in the state, Cheney as an adult moved to Wyoming a year before first running for office.

There is a notable gap in support for Hageman based on length of residency. Hageman led Cheney 55% to 29% among voters who’ve lived in the state for 10 years. Among voters who’ve been here for less than a decade, Cheney led 36% to 35%.

Cheney’s vote to impeach the former president after the Jan. 6 attack on the U.S. Capitol and her steady criticism of Trump as a threat to democracy and the rule of law have spurred the toughest reelection fight of her career. In September, Trump selected Hageman from several challengers as his pick to take on Cheney, who has become one of his biggest political enemies.

In her previous elections, Cheney has handily beat her primary opponent. And given that Wyoming is one of the nation’s most conservative states, the Republican House nominee often coasts to victory in the general election.

The Montana Supreme Court on Friday struck down an attempt by Republicans in the Legislature to change the way the high court’s justices are elected.

Each prison inmate in the program is responsible for shoeing and training four to six horses.

The nation’s hospitals are facing unprecedented financial losses as labor shortages, wage pressures and inflation follow a global pandemic – and the same is true in Montana.

The fliers piled up in mailboxes in South Dakota like a blizzard: "Transgender Sex Education in Schools?" one asked. "Vote Against Sex Ed Radical Mary Duvall for State Senate."

Montana remains on track to switch over to a new statewide voter management system in January 2023, after an encouraging test of the system in the state's June primary.

Montana has two House seats up for election this November.

Love’s announced Monday that it will not move forward with plans to build a truck stop along I-90 next to Ramsay.

Butte woman prison bound after theft from elderly, blind woman under her care

Woman instead spent the money on lake property, vehicles, a pontoon boat and other items for herself.

After his second impeachment, former President Donald Trump made it his mission to defeat Rep. Liz Cheney, his chief Republican rival. On Tuesday, he succeeded.

Some Republican legislators want to return part of an estimated $1 billion surplus to taxpayers, while others want to spend the money offsetting future spending obligations.