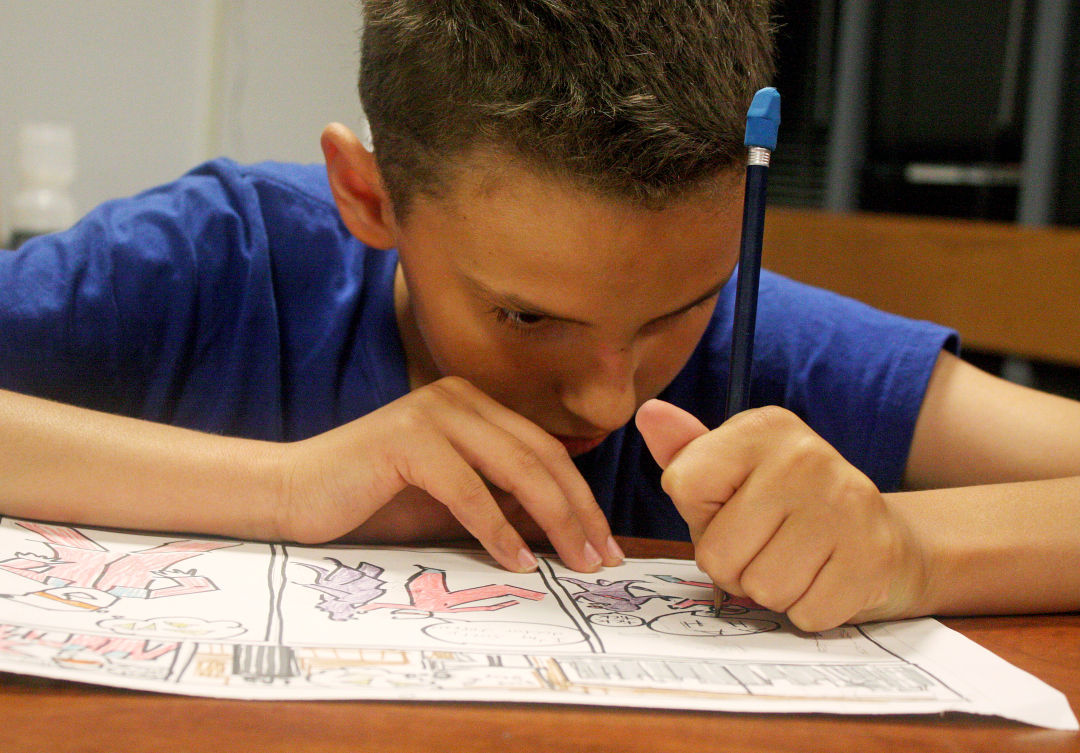 Kaden Midgett fills a character’s speech bubbles while at Camp Chronicle last Wednesday morning. One of the main characters in Kaden’s comic is Dr. Jeffery, who ate pizza and turned into a mutant rat that shoots lightning. 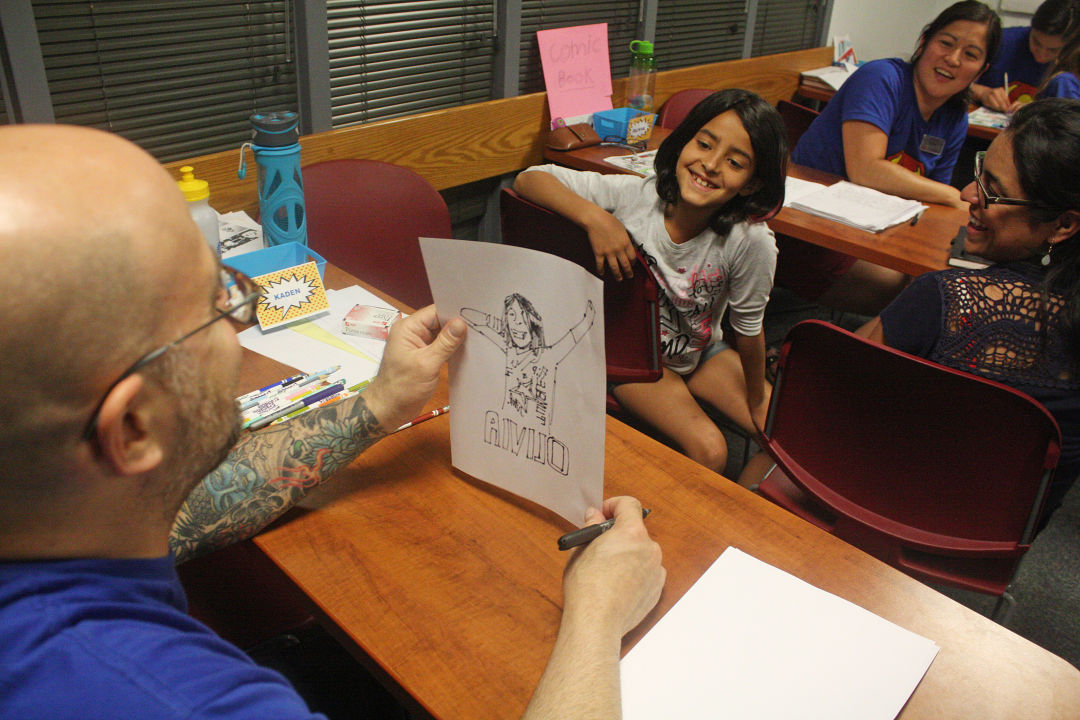 Metro, a telepathic superhero, quickly defeats a mutant rat so he can get back to his favorite food, pizza, in a freshly released, limited-edition one-page comic.

The up-and-coming artist and writer is Kaden Midgett, a gregarious 11-year-old. He was having so much fun explaining his original tale last week that you'd never guess he was at an educational summer camp.

But Camp Chronicle is uniquely suited to Midgett, one of nine Missoula adolescents who enrolled to improve their word-level reading and writing skills.

"He's been making comics at home for years and selling them," mostly to family and co-workers, she said.

So signing him up for what's essentially schoolwork in the middle of summer was easier than usual.

Kaden, a Daredevil fan, was picking up some new books at Muse Comics when he met Tony Gregori, a professional comic book artist who told them about his work with Camp Chronicle.

It's the creation of Ginger Collins, an assistant professor in the University of Montana's Department of Communicative Sciences and Disorders.

Collins started the concentrated intervention program several years ago, with superheroes as an effective hook to keep the kids interested.

"I didn't know anything about comics books myself, but I knew that that was something highly motivating for that age group," she said.

If a child doesn't know how to read by then, she said, they're often treated as a lost cause despite the efforts of parents and teachers.

"That's simply not true," she said. "They're maybe not learning best by conventional methods."

Before the camp starts, the kids take a full day of tests to determine their reading levels and needs.

She said the majority of the children have disorders on the dyslexia spectrum, and some have autism spectrum disorders.

A 12-year-old student from last summer's camp would spell his name differently every time.

Another child took a standardized spelling and reading test and was "basically at zero percent in everything."

This summer, most of the kids have mild problems, particularly with encoding and decoding.

Decoding refers to word-level reading, Collins said. "To read efficiently, one must understand spelling patterns, such as 'he silent E rule' or 'R-controlled syllables' or when to double consonants," she explained.

Encoding, meanwhile, is a "fancy word for spelling," she said.

Each day, the camps start at 9:30 a.m. The kids work with graduate student clinicians, often with one to two kids for every adult.

They begin with a quick narrative exercise to get them warmed up before skills exercises.

Those include sentence structure, grammar, spelling and more, lessons that are all designed around their comic.

"We continually revise and revise these narratives," Collins said. "Even though it's just one project, we just hone it from different angles."

"They're really invested in it because it's their own creation," she said.

They produce a written story, in which they "tell, don't show," and an accompanying one-page comic, which teaches them to "show, don't tell."

The afternoons are dedicated to the art portion, when Gregori comes in and teaches them about character design and storyboards, and provides feedback on how the writing process works, such as reminding them to be descriptive, so the artist knows exactly what they want.

Some of the kids need more help than others.

"A lot of them, they don't think they're capable of doing some of this stuff," he said. "They think it's impossible, because they haven't done it before."

It's a laid-back atmosphere, in which the kids feel comfortable getting Gregori's expertise, or in Kaden's case producing caricatures of him as a thank-you card.

Gregori enjoys the work, including the kids' uninhibited, lighthearted approach to comics.

"It's fun to hang out with them and see what they come up with," he said.

The classroom as a whole was bustling last Wednesday, as the campers and their grad students worked on finishing their projects.

Everything Girl, who can bend space and time and lives in a city with "pink skies all around," needs to save the world's animals from a villain's experiments. (She succeeds, and a giraffe can get back to grazing.)

Her comic follows all the rules Gregori and Collins taught them: a comic needs to establish characters, a typical day, a setting, a time, an unexpected event, character thoughts, an attempt, a consequence and a reaction/thought.

TJ Peer's superhero battles a dragon in an impressively drawn and storyboarded comic.

He's been drawing for "a long time," he said, but the camp has helped his literacy skills.

Cole Rhodes, a 9-year-old who loves reading "A to Z Mysteries," a popular series for kids, wrote and drew a comic about a scientist who accidentally turns himself into a turtle with "neon-green chemicals."

Not only has Cole been improving his technical skills, but it's a boost for his confidence as well, John said.

Mina May, one of the grad student clinicians, said it's a crucial age when schoolwork transitions from learning to read to reading to learn.

If they don't have the foundational skills yet, they'll fall further behind, even though they're being smart kids who Collins said  "desperately" want to learn to read.

That inability can start to affect all the other parts of their lives as well, May said.

"If you don't have successful moments, how are you going to succeed in life?" she said.

The culmination of the camp came Thursday with a little economic incentive: The kids sold their comic books on campus.

"I think it's a real morale booster. These are kids who are very insecure about their reading and writing skills," Collins said.

They netted about 50 sales total: a nice encouragement for starting artists that could keep them writing and drawing after camp's over.

"You created this, you wrote this and somebody actually paid money for it," Collins said. "It can be a real game-changer about their attitude."

Camp Chronicle, or "Creating High-Quality Renderings and Original Narratives in Comics in a Language-Rich Environment," will be held again in the fall at the University of Montana. The classes are open to children ages 8 to 11 who need help learning to read or write. Scholarships are available. For more information, go to bit.ly/1Iocb0T, or contact Ginger Collins at (406) 243-2626 or ginger.collins@umontana.edu.

This human skull was mysteriously found in an Italian cave

This human skull was mysteriously found in an Italian cave

Beirut explosion: 'There are lots of patients suffering from anxiety, depression and PTSD'

Beirut explosion: 'There are lots of patients suffering from anxiety, depression and PTSD'

Deer Lodge theater gears 'Inside Out' for autistic children

It’s called a “sensory movie,” and don’t feel bad if you haven’t heard of it.

A Missoula group hoping to increase student access to arts education is looking for local artists to be mentors and teachers in schools.

During the first four years of Ryker Slaght's life, he learned the tools he needs to live with autism by working with Missoula's Child Develop…

This Saturday, Muse Comics & Games will host one of its busiest days of the year, even though many of its customers will be getting their …

Kaden Midgett fills a character’s speech bubbles while at Camp Chronicle last Wednesday morning. One of the main characters in Kaden’s comic is Dr. Jeffery, who ate pizza and turned into a mutant rat that shoots lightning.