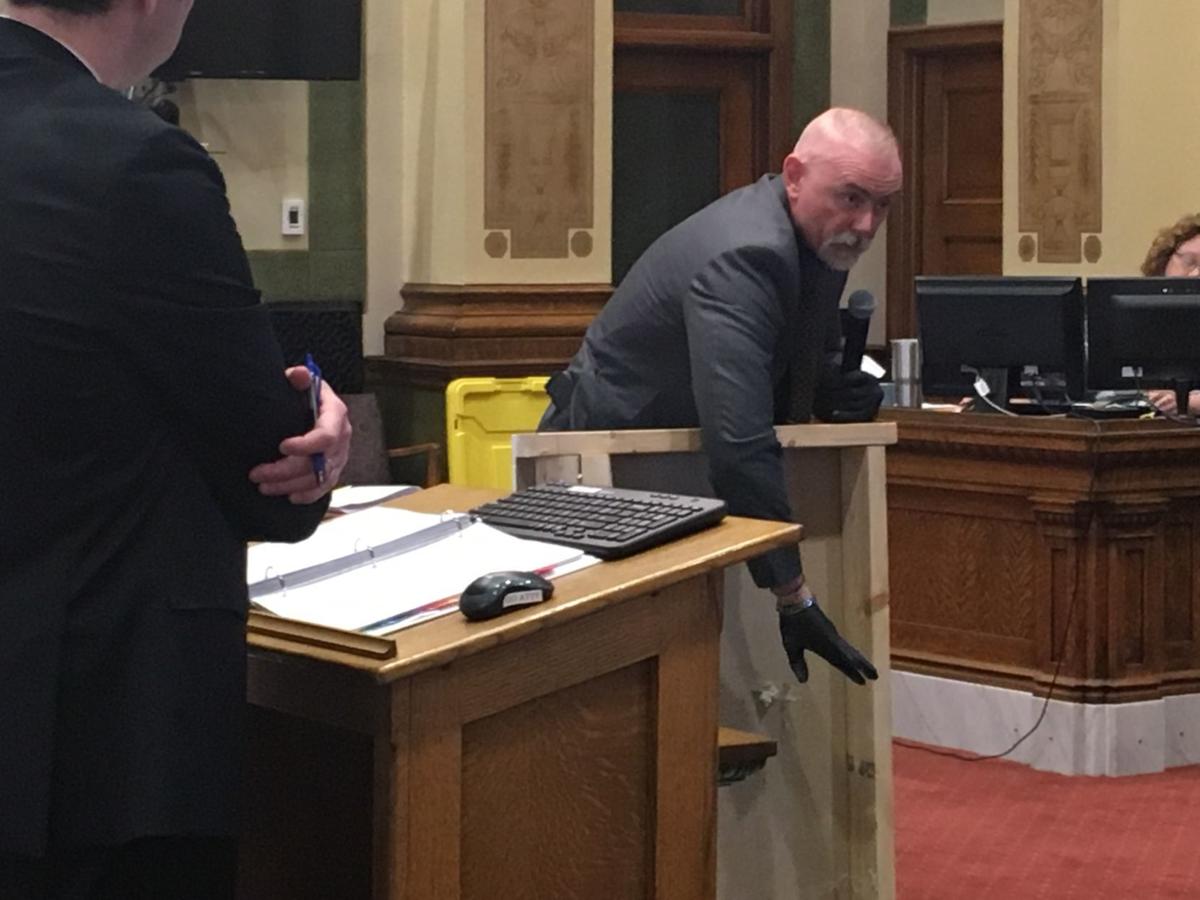 Missoula County Sheriff's Detective Glenville Kedie shows jurors the drywall taken from the home of Caressa Hardy. A bullet, believed to have been fired when Hardy allegedly shot to death Thomas Korjack and Robert Orozco, was found behind the drywall, Kedie said. 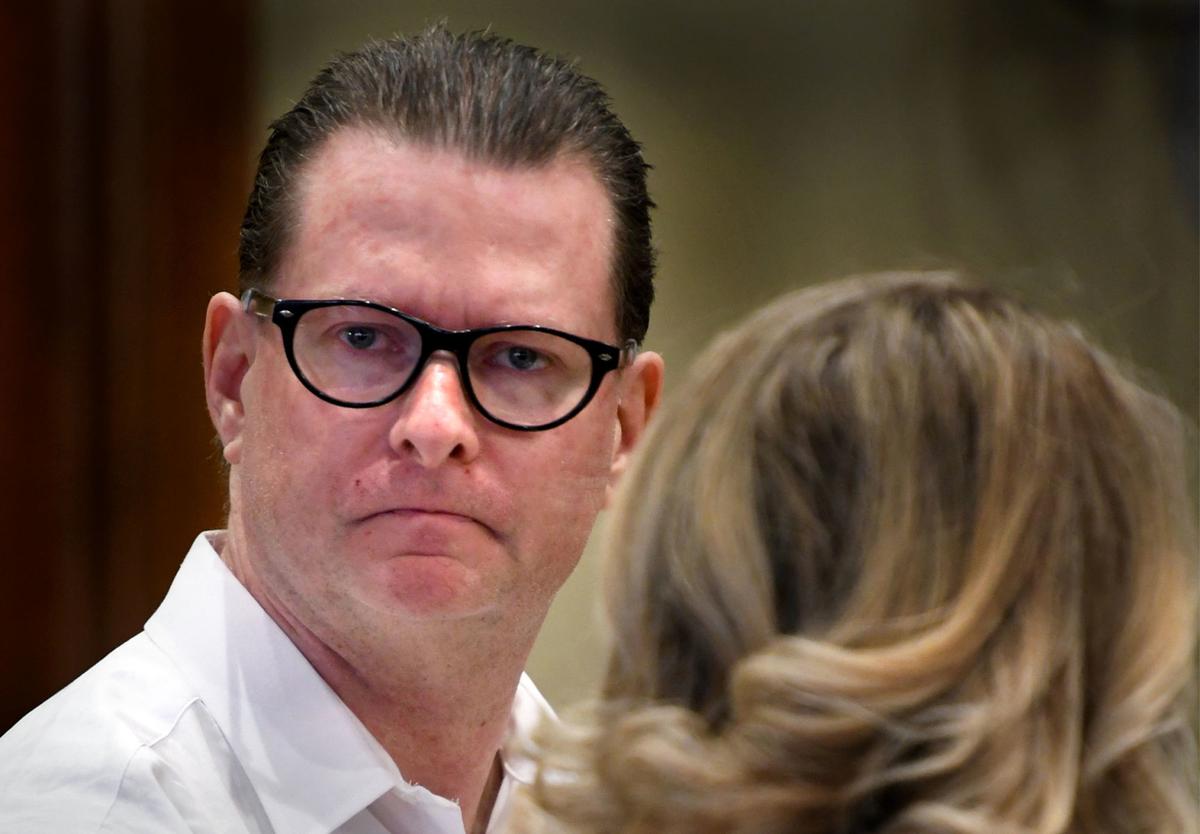 Caressa Hardy, also identified in court records as Glenn Dibley, watches the jury leave a Missoula County District Courtroom on Tuesday during a break in the trial that alleges Hardy killed two men with whom Hardy shared a home outside Frenchtown in 2013. On the right is a member of Hardy's defense team.

Missoula County Sheriff's Detective Glenville Kedie shows jurors the drywall taken from the home of Caressa Hardy. A bullet, believed to have been fired when Hardy allegedly shot to death Thomas Korjack and Robert Orozco, was found behind the drywall, Kedie said.

Caressa Hardy, also identified in court records as Glenn Dibley, watches the jury leave a Missoula County District Courtroom on Tuesday during a break in the trial that alleges Hardy killed two men with whom Hardy shared a home outside Frenchtown in 2013. On the right is a member of Hardy's defense team.

Months after Caressa Hardy was arrested in July 2017 at his home outside Frenchtown, anthropology teams from the University of Montana assisting law enforcement uncovered bone fragments from a femur, vertebrae, fingers and toes, and 11 teeth.

Adjunct assistant UM anthropology professor Kirsten Green Mink testified as an expert for Missoula County prosecutors on Friday that the human remains found in a fire pit on Hardy's property were established as those from two different people. But the bone fragments, all weathered by a fire and several winters, were not capable of producing useful DNA, she said.

Friday marked the end of the first week of Hardy's trial in Missoula County District Court, in which Hardy — also known as Glenn Dibley — is charged in the alleged March 2013 killings of Thomas Korjack and Robert Orozco at the home they all shared on Pond Road. The two men have not been seen since, although no remains have been positively identified as theirs.

When Missoula County Deputy Forrest Merrill was called out to Hardy's property four years later on an unrelated report, he noticed the great lengths Hardy had taken to keep people out: a truck parked in the driveway with a mannequin inside, set up to look like the house was being watched; small trees draped across the driveway; motion detectors in the trees; padlocks on the front porch and a series of metal screen gate doors that were all secured with deadbolts, Merrill testified Friday.

Hardy's defense has contended, as he reportedly told others in the past, that the security measures were for his daughter's safety.

At the time, Hardy was under investigation for the killings. Karen Hardy, Hardy's former partner and mother of their three children, had gone into a police department in 2016 to report that she was there when Hardy fatally shot Korjack and Orozco.

Missoula County Sheriff's Detective Glenville Kedie on Friday described the findings after authorities moved in on Hardy's property following his arrest on July 31, 2017. Why the arrest was made that day, after about a year of investigating the alleged killings, has not yet been described in court.

Kedie commented on the video shown to jurors Friday, taken as authorities first spanned the wooded 10-acre property. The video put images to several items already described during the trial, including the window which Hardy is alleged to have shot out during the killings, the fencing he put up afterward, and the burn pit where investigators and the UM team found the remains.

A second video showed teams entering a green trailer home on the property. There, in a space Kedie described as very cluttered, they found a .45-caliber Springfield Armory XD handgun, believed by prosecutors to be the murder weapon.

Kedie also held for the jury a slab of drywall taken from a basement room of the house, where Korjack and Orozco allegedly were shot to death. After clearing each piece of furniture and clutter from the room, Kedie said investigators began inspecting the walls; particularly around the window, which Karen Hardy said had been shot out in the attack. A small imperfection on the drywall prompted detectives to pull the piece of the wall off, revealing a "pancaked" bullet on the floor behind the drywall.

As law enforcement began their takeover of Hardy's property, Missoula County Sheriff's Detective Jared Cochran handed him the search warrant, outlining the details of the investigation that earned them the documentation to search the property.

"The defendant did not seem to react to the allegations that he was being charged with the homicides," Cochran testified Friday.

Hardy has not reacted to much of anything this week, writing a few notes as witnesses testified for the state. He mostly looked on as prosecutors played the conversations between himself and Karen Hardy, recorded by law enforcement in 2016. In those calls, Karen Hardy, who was sitting next to Cochran when she phoned Caressa Hardy, tried confronting him about the killings, but ultimately he hung up on her.

They spoke again within a few days, talking about their daughter, Karen Hardy's living situation in South Dakota and how she was short on resources. He offered to help her out, if she came back to Frenchtown to watch their daughter while he went on an out-of-state trip to retrieve some cash owed to him.

"How do I know I can trust you?" Karen asked him.

"I have never had any desire to harm you or hurt you," Hardy responded.

Karen Hardy's testimony earlier this week suggested Hardy killed Orozco and Korjack, who had been paying for nearly all the bills and necessities, because he believed Korjack was going to cut him off. She said she was in the room when Hardy began firing the gun, but his demeanor flipped "like a switch" when she pleaded with him not to kill her or her 4-month-old baby in her arms.

"How do I know you're not trying to get me to kidnap us or something?" she contended on the phone call, growing more cautious.

"Oh, my God, you're so funny," he responded, brushing her fears off.

In August 2017, the FBI joined the effort to scour Hardy's property with two cadaver dogs and an evidence collection team of 15 people. Along with the bullet, gun, bones, documents and other evidence prosecutors say point to Hardy's guilt, a note was also found from Korjack, called "Doc" by some. The note was on a table next to Hardy's bed, still sitting there more than three years after Korjack and Orozco disappeared.

Kedie recalled picking the note off the table and reading it:

"You did not lose your home in Gillette, because you gained a home here. This is your home, too. Love, Doc."

The trial continues next week. Prosecutors have yet to call witnesses related to the solicitation of murder charges filed against Hardy after two Missoula County jail inmates told law enforcement Hardy was trying to recruit someone to kill Karen Hardy.

After whittling a 12-person jury out of the pool of 200 people called in to Missoula County District Court on Monday, opening arguments were s…