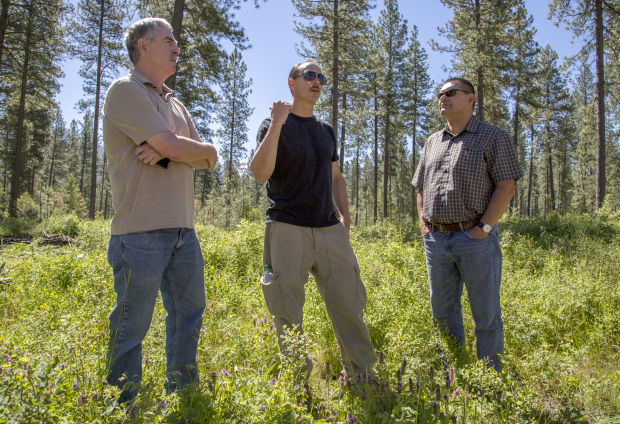 Tony Harwood, division manager of project planning for the Confederated Salish and Kootenai Tribes, Ron Swaney, CSKT fire management officer, and Jim Durglo, department head of CSKT Forestry, stand in the Crow Post timber sale near Ronan last week. Together, the group has been working to strike a balance between low budgets, fire management and a healthy forest on the Flathead Indian Reservation. 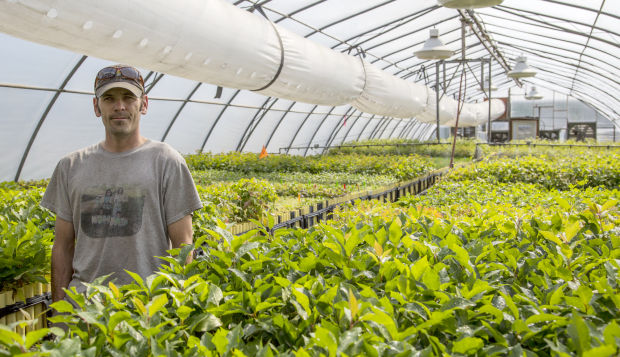 Jean Deranleau works in a CSKT Forestry greenhouse last week. The CSKT Forestry Department has been growing native and riparian plants to help with restoration projects all over Montana, including the Milltown Reservoir restoration site east of Missoula. 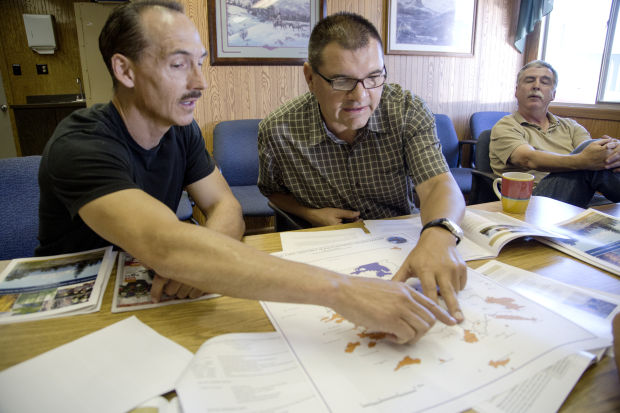 Swaney, Durglo and Harwood talk about fire management on the Flathead Reservation while showing a map of different fires that burned there. Harwood says reservation forests act like the catcher’s mitt for fires in the Lolo National Forest. The 2007 Chippy Creek fire, for example, burned 36,000 acres of reservation forest.

“The interesting thing about it was it showed the trend of being understaffed and underfunded continues,” Durglo said. “But we and some other tribes are doing quite a departure from the old European forestry – silviculture for economic return. We take a more holistic approach.”

The 2013 Intertribal Timber Council’s decadal report found that “federal investment in Indian forest management is significantly below the level of investment in Forest Service, Bureau of Land Management or private forest land management. ... This is evidenced by the fact that funding and staffing levels are lower now than at the time of (the council’s first report in 1993) and well below those of comparable public and private programs.”

A 2009 comparison by the Bozeman-based Property and Environmental Research Center of timber harvests on the Flathead Reservation and Lolo National Forest found the Indian program out-earned the federal operation, averaging $2.04 for every dollar spent compared to the Lolo’s return of $1.11 in revenue per dollar spent.

“CSKT is up there with a handful of other tribal forest management programs in the country among the best,” Montana State Forester Bob Harrington said. “In the middle of all this debate on the future of federal forest lands, there’s this other story that’s out there. It’s an indicator of what can happen when you have fairly straightforward governance.”

Harrington pointed to two features that make CSKT’s forestry program so successful. One is its close link to the reservation community, including tribal elders who identified the forest’s cultural, traditional and spiritual qualities. The second is the program’s operation as a trust resource.

That means tribal members share ownership of the forest, and the forestry department manages it for their benefit. While that seems like an obvious definition of public lands, Harrington said it’s rare to have the plan so clearly laid out.

On the Flathead Reservation, the CSKT Forestry Department oversees about 900,000 acres divided into three equal parts. Commercial logging takes place on 300,000 acres, producing about 18.1 million board feet of lumber worth $3 million a year to the tribal general fund. Another 300,000 acres fall in the wilderness category, including the Mission Mountains Tribal Wilderness and adjacent Tribal Primitive Area. The third portion is rangeland.

“But there’s more to the forest than logs and the products that come out of it,” Forestry Planning Director Tony Harwood said. “The tribal elders helped us describe our generational homeland. It’s strongly based on economic services, but there’s also wildlife, tribal cultural elements, traditional foods and medicines, religious practices, and solitude.”

“The low level of funding is hurting the ability of tribes to care for their lands and resources,” said John Gordon, who has led all three Indian Forest Management Assessment Team studies. “Unless the United States provides adequate funding to fulfill its fiduciary trust obligations, the forests which are so essential to tribal communities will ultimately deteriorate. Fish, wildlife, foods, medicines, water and tribal peoples will suffer greatly.”

“If tribes received the same level of funding that the federal government provides for federal forests, tribal forests could serve as valuable models of sustainable stewardship,” Gordon added. “By melding both western science and traditional knowledge tribes could show us ways we could better care for our forests, address wildfire, insect and disease concerns, adapt to changing climatic conditions, and create more jobs.”

For example, when the 2007 Chippy Fire left state land in the Lozeau area and burned onto the Flathead Reservation’s northwest corner, the tribal reaction was much different than that of state and federal incident command team members.

“That was part of our commercial timber base, but it’s also a culturally rich, very special place,” Swaney said. “That area was heavily used by the Kootenai people. It had sugar trees 350 years old.”

Sugar trees are ponderosa pines where tribal people have exposed seams of cambium under the bark to get a sweet snack. They often serve as landmarks for generations of travelers. The Chippy Fire threatened some well-known groves.

“They brought us in at the initial start,” Harwood said, “But they were mainly looking at point protection (guarding homes and infrastructure). We didn’t agree. We wanted full suppression and full perimeter control to protect tribal resources.”

That kind of firefighting costs a lot more money – something nobody has in abundance any more. To balance that, the CSKT forestry plans have been actively removing hazardous fuels, restructuring thick forest stands into more open pine parks, and regularly starting low-intensity ground fires to make the remaining forest more resilient.

Swaney said where the Chippy fire hit such treated areas on the reservation, it promptly faded from a stand-replacement crown fire to a more moderate creeping blaze. Other areas got severely scorched.

“We don’t have a let-burn policy here,” Swaney said. “In our commercial timberlands, it’s full suppression. In wilderness, we use modified suppression. And we also do a lot of underburning and crown management.”

That work gets done at roughly one-third the cost that adjacent Forest Service managers spend, Durglo said. He operates on a treatment budget of $3 an acre, compared to the federal foresters’ $9 per acre.

“We have to be efficient,” Durglo said. “We have an accounting person who’s doing three jobs. A Forest Service wildland fire engine has a crew of four, while we run with two. If they have a fire in the wilderness, they have a monitoring team, a strategic planner and backup specialists. When we bust a fire, our fire management officer has to work all night to do decision support, and then run the fire (crew) on the hillside during the day. We don’t have a depth of positions, or even a lot of positions.”

Durglo said when his timber sale manager also drives a fire truck, the forestry department can’t market its wood as well as it might. It also falls behind on road maintenance, and struggles to keep up with best management practices and climate change adaptation.

Climate change got particular notice in the national report. While the U.S. Department of Interior got $175 million for landscape-level climate adaptation programs, the Bureau of Indian Affairs got $200,000 to spread across all reservations. Durglo said that shows up in his ability to get ahead of hot-weather-related pine bark beetle infestations, among other challenges.

One way to adapt has been to think differently about what his people can do, Durglo said. For example, the Forestry Department used to hire contractors to do the restoration and rehabilitation work when rivers flooded or highways needed erosion control. Over the past decade, CSKT heavy equipment operators have gained enough skills to take those contracts themselves.

They’ve also expanded the department’s greenhouse facility to the point where it supplies specialty plants not just to the reservation, but to rehab projects all over the Northwest. Flathead Reservation trees and shrubs make up much of the new plantings along the rebuilt confluence of the Clark Fork and Blackfoot rivers east of Missoula, as well as the Superfund toxic waste cells at Opportunity, near Anaconda.

“The restoration economy has been thriving,” Durglo said. “We recently bid contracts with Billings and Jackson Hole (Wyoming). We’re always looking for other ways of doing business.”

The Montana Grain Growers said it was confident Montana’s ag economy wouldn’t be negatively affected by the BNSF takeover of Montana Rail Link.

A man upset with being charged a $150 fee for smoking in his motel room fired multiple rounds from an assault-style rifle into the building before driving away, authorities in eastern Idaho said.

Guns or marijuana, but not both

According to the federal Gun Control Act of 1968, marijuana customers — legal and otherwise — are prohibited from possessing firearms.

A proposed constitutional amendment aiming to pump the brakes on growing residential property taxes got an icy reception from legislators last week.

Helena man searches for clues after daughter killed in Utah

Sean-Paul Schulte had just returned to Helena after burying his daughter in Billings when he immediately packed for a trip to Utah where she was killed.

A Billings transgender woman has been awarded compensation by the Montana Human Rights Commission after Yellowstone County’s health insurance policy denied her all gender-affirming healthcare.

Montana has had a complex history with trail cameras and hunting, at one time it was one of the most restrictive state’s in the West and now falls somewhere in the middle.

Tony Harwood, division manager of project planning for the Confederated Salish and Kootenai Tribes, Ron Swaney, CSKT fire management officer, and Jim Durglo, department head of CSKT Forestry, stand in the Crow Post timber sale near Ronan last week. Together, the group has been working to strike a balance between low budgets, fire management and a healthy forest on the Flathead Indian Reservation.

Jean Deranleau works in a CSKT Forestry greenhouse last week. The CSKT Forestry Department has been growing native and riparian plants to help with restoration projects all over Montana, including the Milltown Reservoir restoration site east of Missoula.

Swaney, Durglo and Harwood talk about fire management on the Flathead Reservation while showing a map of different fires that burned there. Harwood says reservation forests act like the catcher’s mitt for fires in the Lolo National Forest. The 2007 Chippy Creek fire, for example, burned 36,000 acres of reservation forest.