A hiker’s decision to save a few steps by cutting between switchbacks may be endangering the future of some of the Bitterroot National Forest’s most scenic trails.

Last summer, the Bitterroot Forest’s five-person trail crew spent a day and a half building a rock wall and hauling in forest debris to cover the user-created trails between switchbacks on the popular Blodgett Overlook Trail west of Hamilton.

Nearly all of that work has been undone by new trails created this summer by hikers who opt to head straight down the mountain rather than staying on the trail designed to keep erosion in check with a walkway that’s safe for public travel.

Bitterroot Forest Crew Supervisor Steve Bull can’t help but shake his head in disgust as he walks up the trail and points out the work his crew accomplished last year to shore up the steep hillside, and the new trails that have appeared since then.

“It took my guys a lot of work last year to get all of this done,” Bull said. “You put all this energy into it and then seen all these new trails appear. It’s insane.”

Bull’s trail crew is charged with the impossible task of maintaining 1,800 miles of trail on the Bitterroot Forest.

“We have the same amount of trail as there is highway between here and Chicago,” he said. “When we have to work on projects like this, it means there’s less time that we can spend on things that are broken.”

On Thursday, Bull was working with a Youth Conservation Corps crew to help shore up a short section of a user-created trail that was already cutting a deep groove into the steep mountainside. The high school students and their supervisors were packing large rocks up the trail to help build a new wall that will protect from erosion and hopefully keep hikers on the main trail.

Bull doubts that his trail crew be back to Blodgett Overlook Trail again this year to work on the other four or five new user-created trails that have appeared this summer.

That could turn into a large problem for the thousands of folks who make it a point to hike the 1.5-mile-long trail that offers expansive vistas of the valley floor, ending with a breathtaking view of Blodgett Canyon.

Bitterroot Forest Staff Officer Cole Mehn has served as an agency soil scientist in the past. Despite the fact that it’s been less than a year the new switchback cutoff trails have formed, Mehn can already see them beginning to erode.

“If we don’t stabilize these, then they’ll erode and could eventually wash away the trail,” Mehn said. “Once these trails are created, it can be hard to get the soil stabilized again. These are dry sites with coarse soils. It’s difficult to get vegetation reestablished, especially if people continue to disturb the area.”

Mehn said it’s obvious that it doesn’t take long for the damage to occur.

“There might not be much to see after the first five people take the shortcut, but that often is enough that will cause others to follow,” he said.

Once the water starts to go straight down the mountainside, it doesn’t take long before erosion begins to cut into the actual trail. If it persists long enough, the whole trail can be washed away.

“In 10 years, that little trail will become a gully,” Mehn said. “And that becomes a safety hazard for others wanting to hike the trail.”

If a trail does wash out, Bitterroot Forest officials may not have any other options other than to close it.

“Every option is on the table,” said Bitterroot Forest spokesman Tod McKay. “We’re certainly hopeful that we won’t have to go that far, but we don’t have the resources to have people constantly at the Blodgett Overlook Trail.”

Bull sees similar damage occurring at other popular front range trails that include a number of long switchbacks. The trails to St. Mary’s lookout and the Bear Creek Overlook are the good examples.

“I think that a lot of people just have no idea that they’re supposed to stay on the trail, but that’s something that really needs to change,” Bull said.

For that to happen, Bull said the Forest Service needs the public’s help.

As trails in the Bitterroot Forest become more popular, Bull hopes that same cultural awareness will help people preserve the natural beauty that they come to places like the Blodgett Overlook Trail to enjoy.

“This is one of our better designed trails,” he said. “We shouldn’t have to be spending much time here. …Trails like this one are designed so people can keep their heads up and look around while they’re hiking. Isn’t that whole point of being out here in the first place?”

Just shy of 100 people spoke in opposition of the legislation from Sen. John Fuller, R-Kalispell, while nearly 45 people supported it.

The bill cleared its initial vote in the Senate 34-15 along party lines, and will face a final vote on Friday.

The reforms come with some subtext as the state still faces litigation against bills the 2021 Legislature passed, which has featured some procedural maneuvers Republicans have rebutted as unfair.

They were initially booked into the jail following a drug bust by U.S. Marshals in the Helena area.

The balance of rights for landlords and renters has long come with an inherent tension.

Senate Bill 112 would give pharmacists the ability to prescribe what bill sponsor Sen. Tom McGillvray said was a narrow scope of medications.

Speakers offered the alternatives as both tailoring education to individual needs as well as promoting families and parents to dictate the education of their children.

Labor groups oppose a bill that would require public employees to sign a consent form each year affirming they want to remain in a union.

Bill would keep ESG considerations out of MT's investing decisions

Opponents argue the proposal might have undermined attempts to divest Montana's Russia-linked assets after war broke out in Ukraine. 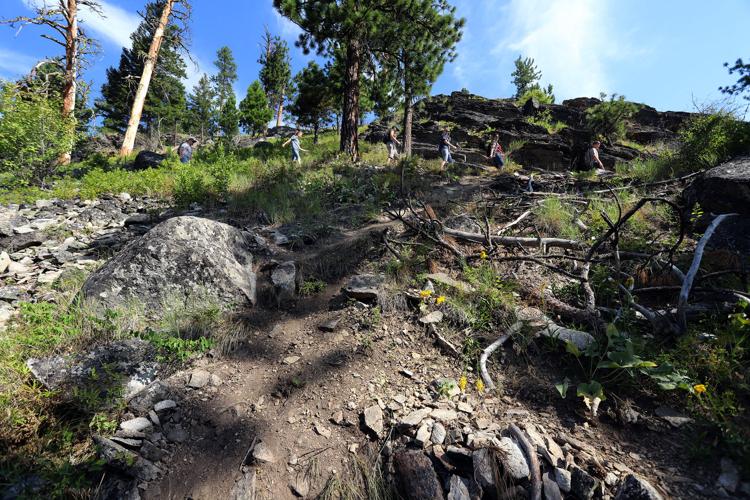 A group of hikers on the Blodgett Overlook Trail hike past one of five new user-created trails that have appeared this summer between switchbacks in the main trail. This one is beside a similar user-created trail that a Bitterroot National Forest trail crew had covered with debris to encourage people to remain on the main trail. Bitterroot Forest officials say hikers who opt to cut switchbacks could be endangering the future of the popular trail. 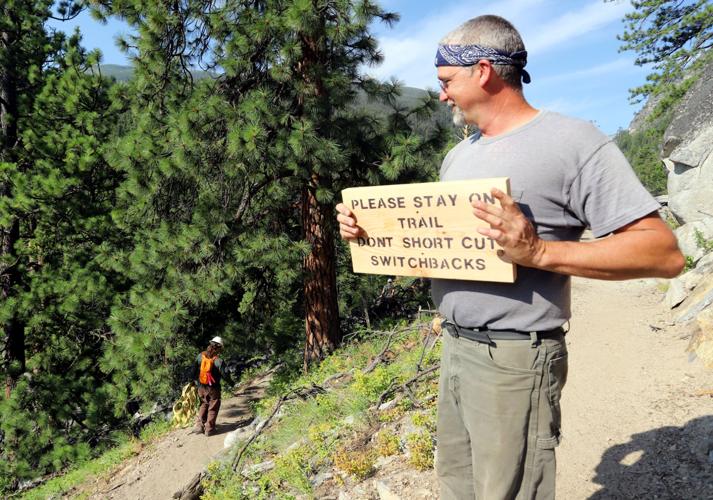 Bitterroot National Forest Trail Crew Supervisor Steve Bull holds a new sign that will encourage hikers to stay on the main Blodgett Overlook Trail. After his crew spent a day and half working on user-created trails used to cut switchbacks, Bull posted a similar sign. It was broken in half and knocked down just a few days later. 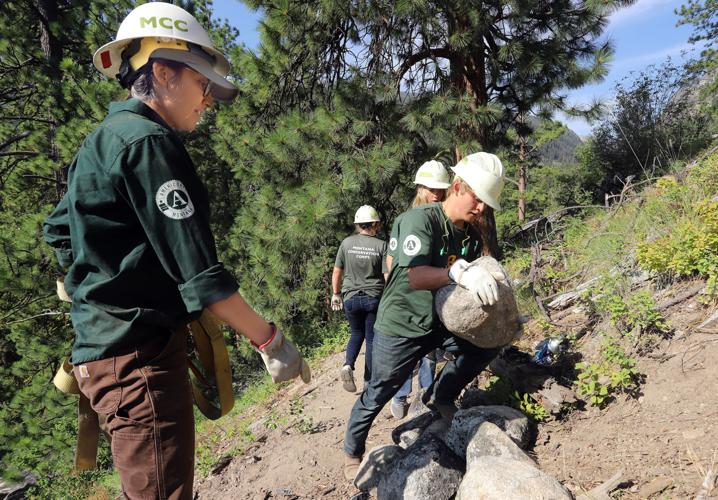 Montana Conservation Corps supervisor Erynn Castellanos shows Youth Conservation Corps members Dustin Steele and Carmen Ebsen where to place a rock that will become part of a wall used to help keep hikers from cutting a switchback on the popular Blodgett Overlook Trail.