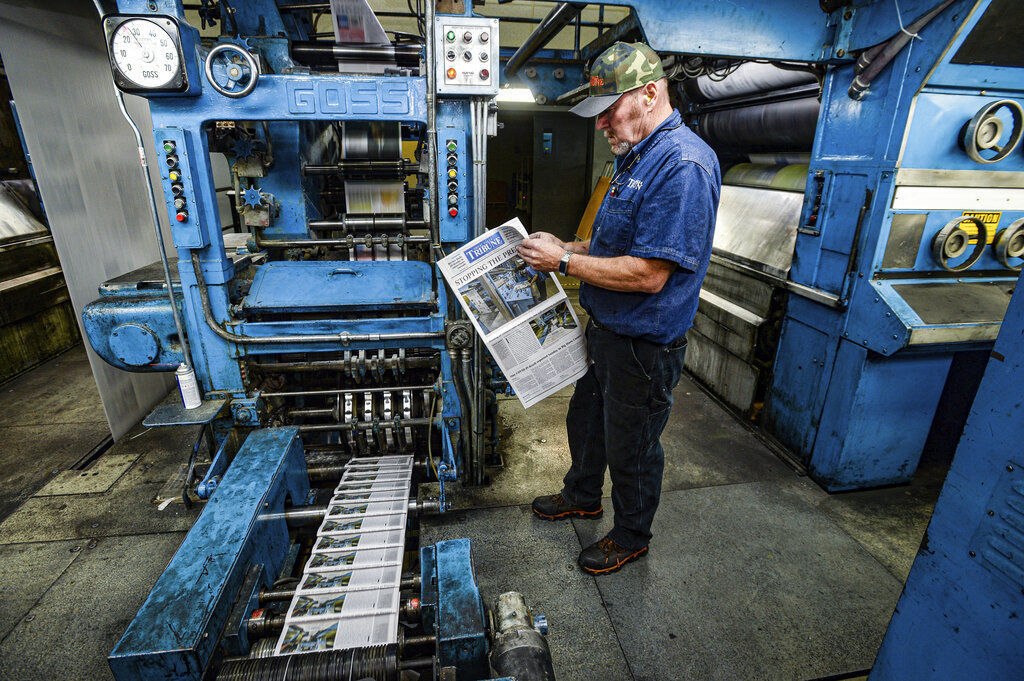 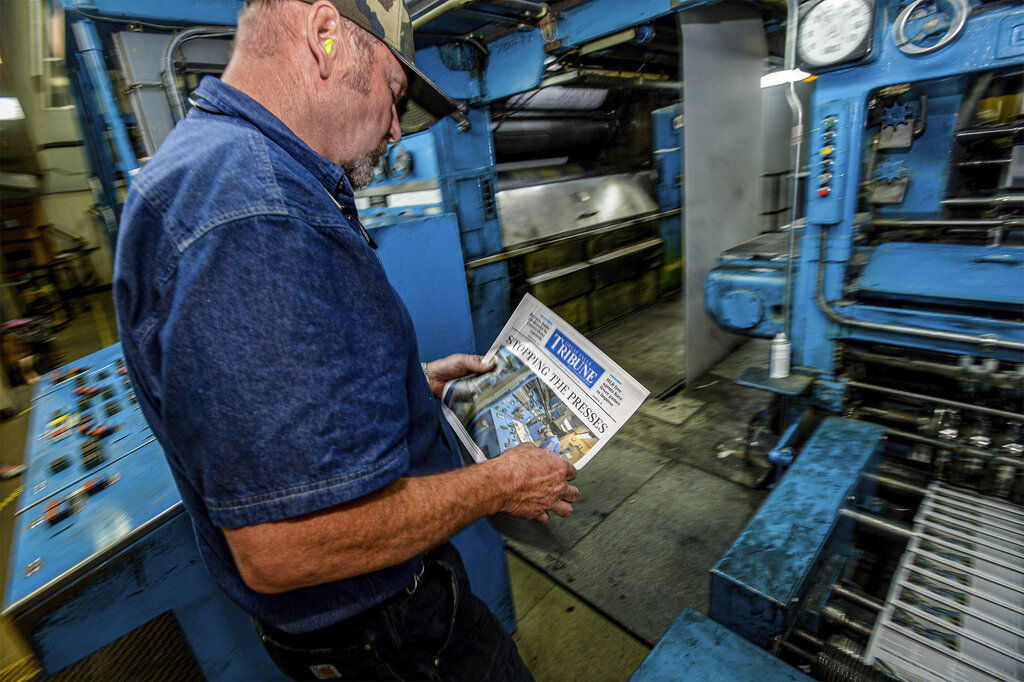 The Tribune will now be printed in Helena. 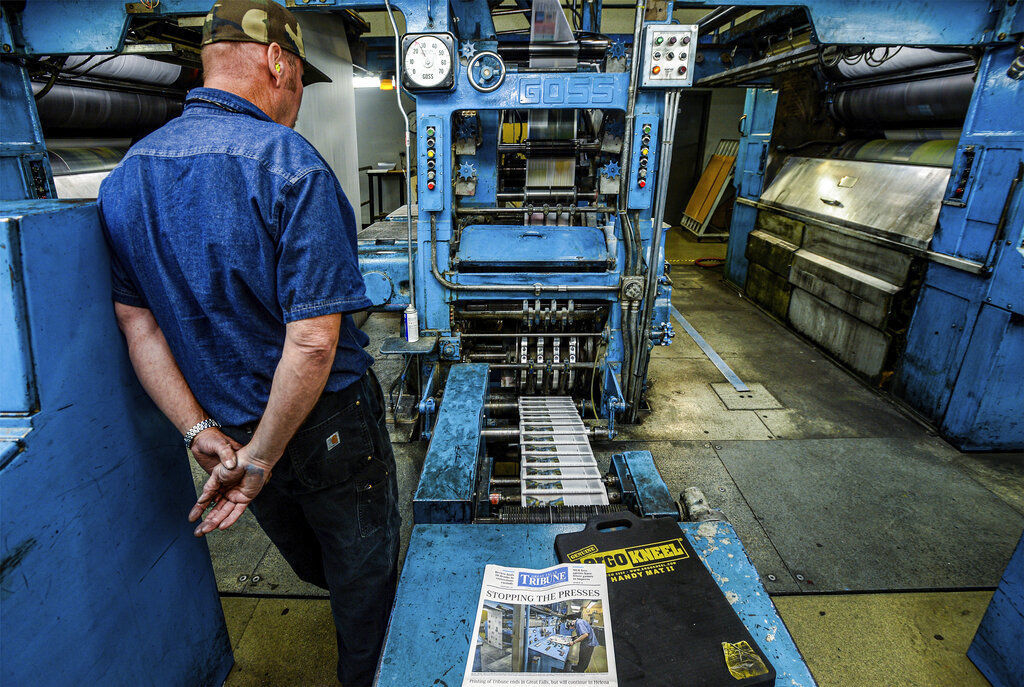 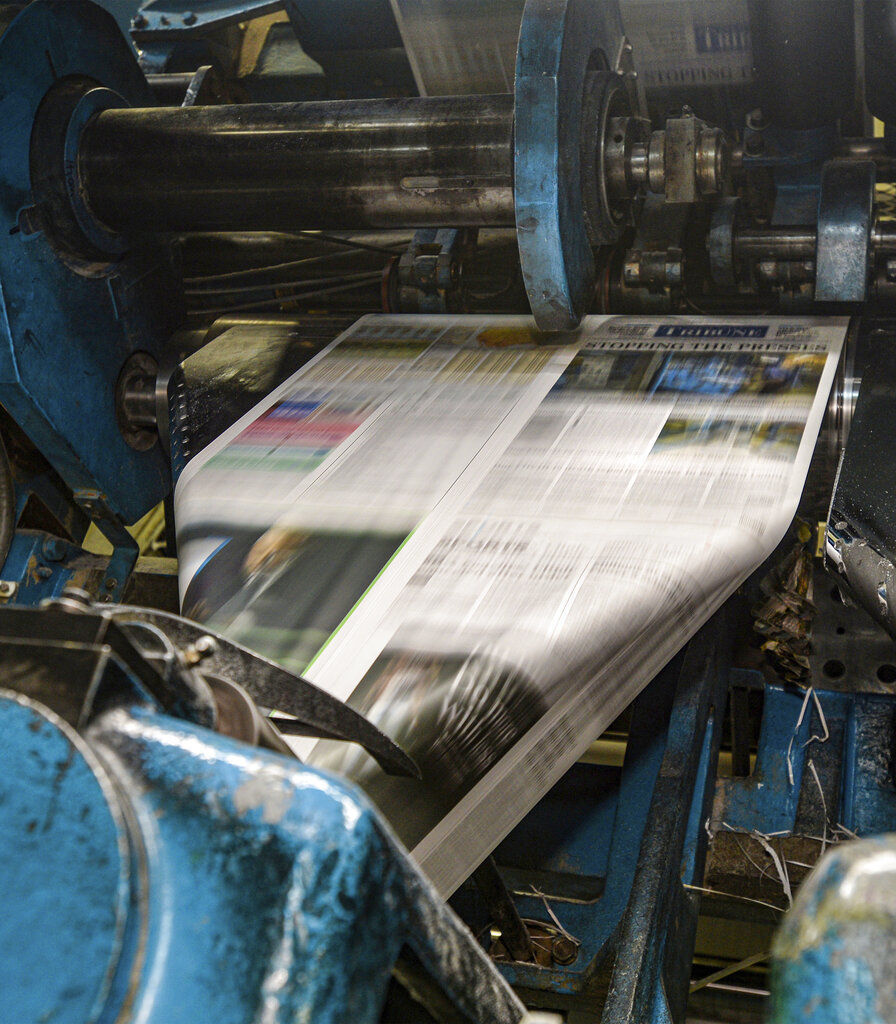 The final edition of the Great Falls Tribune printed in Great Falls rolls off the Tribune's printing press Sunday. 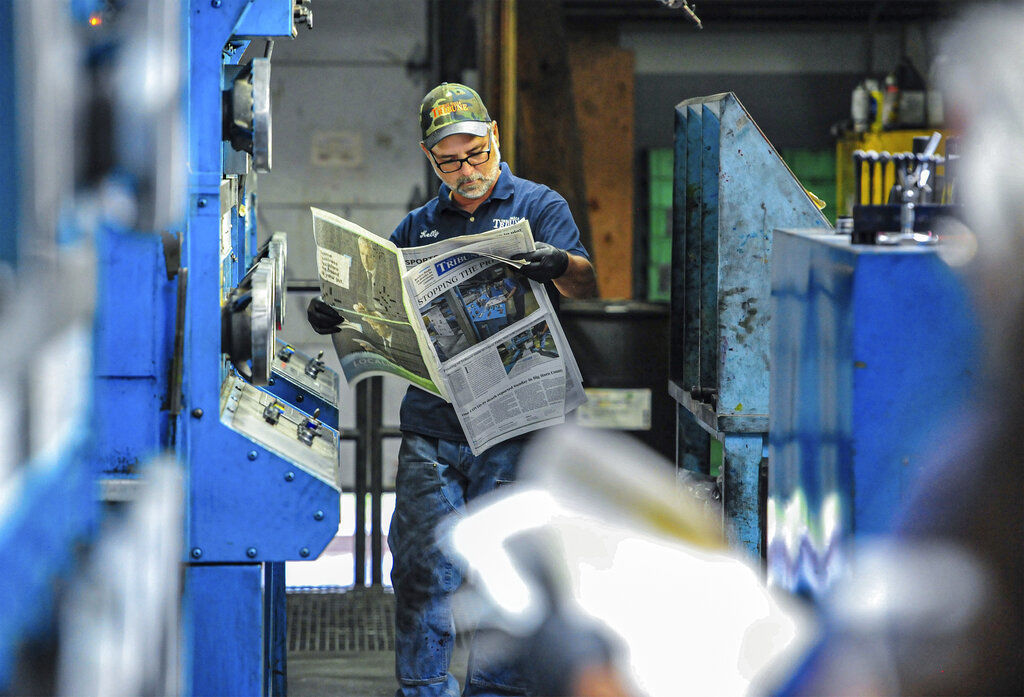 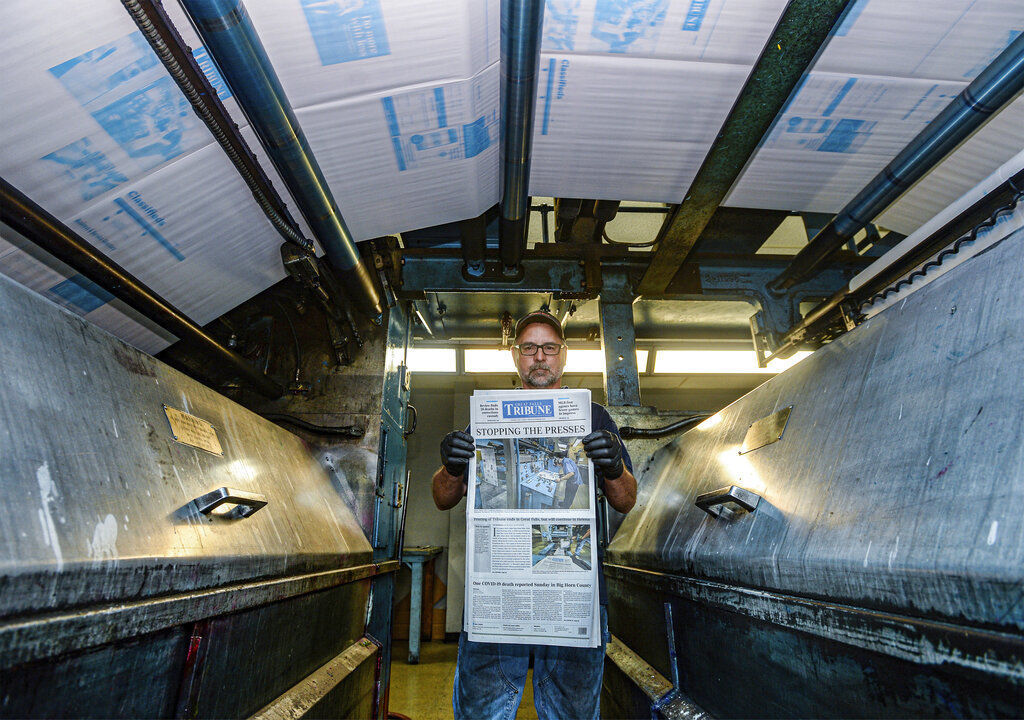 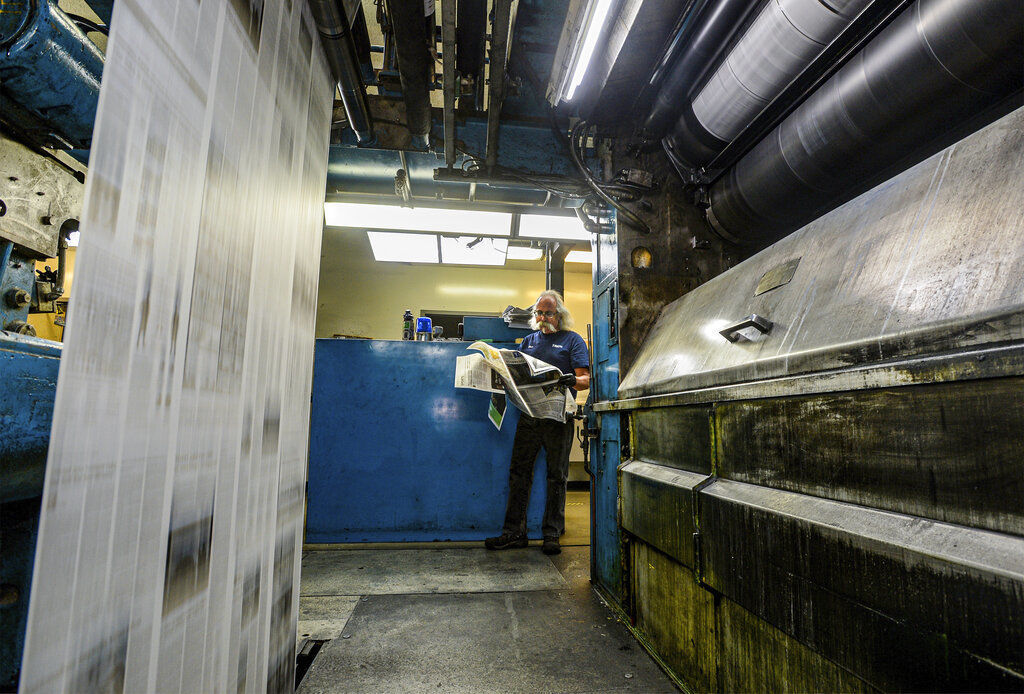 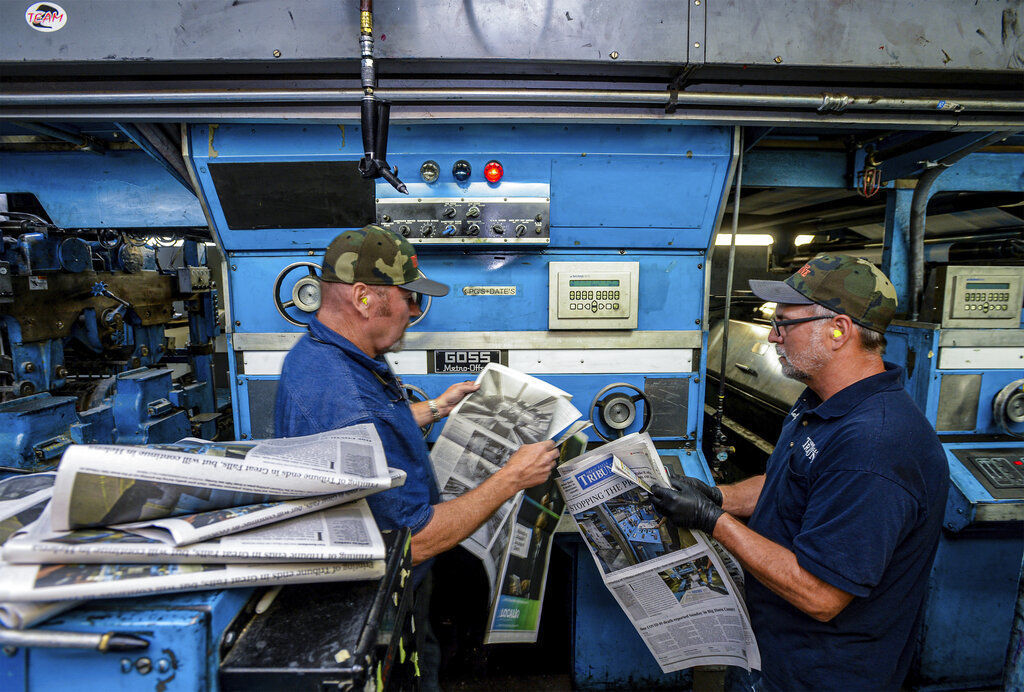 GREAT FALLS — It's a paper that's older than Great Falls. Older than Montana, even.

Folks around here got their first news from the weekly Tribune in 1885, when about 200 residents lived in the middle of the prairie, including the Trib's first employee, whose family lived in a tent near what's now Broadwater Bay.

Two copies of its first issue were printed on satin and auctioned for $100 each.

Less than 2 months after the Tribune came into existence, there were rumors it would leave Great Falls.

The Tribune responded on July 2, 1885, "It is probably unnecessary to refute the lie, for its parentage is so doubtful. But it certainly originated in the enfeebled brain of an idiot and then voiced among a pack of gossiping poltroons."

Monday's paper marked the final edition of the Tribune printed in Great Falls, as press operations have moved to Helena, the Great Falls Tribune reported.

Since its inception, the Tribune steadily improved its printing process to keep up with the times.

A meander through the Tribune's online archives shows how the paper hauled its whole operation around downtown Great Falls.

When the Trib was merely a toddler, it had already taken its first steps from its first building to a new space in the Park Hotel, now known as Park Manor.

A December 1887 issue of the Tribune lauded a new cylinder press weighing nearly one ton. The delivery of the steam-powered engine was delayed for several months and arrived in July.

"Beside it stands a Washington press, silent and sad," the article read. "Franklin would have paid a round sum for it, but now its occupation is gone so far as this office is concerned, and it will be sold at a bargain for cash or traded for mules."

A paper in those days cost 5 cents per copy. Subscribers paid $10 per year for the daily edition, which printed six days a week.

In 1890, the whole works moved to 317 1st Ave. N., then two years later, to a Central Avenue basement beneath the Kaufman Clothing store next to First National Bank.

Workers did typesetting by hand until 1896 when the first linotype was installed.

The wayward publication found a more permanent home in 1916, when it set up shop on the corner of 2nd Avenue North and 4th Street in building that still bears the Tribune's name.

Cascade County now owns the old Tribune property, which houses the treasurer, clerk and recorder and county attorney offices and the planning department.

It was the Tribune's home for 63 years.

In those days, the Trib had a twin press that could print eight pages at a time. One half at a time, staff transported it to the new building without missing a single issue.

The Nov. 13, 1939, Tribune dedicated nearly the entire paper to the celebration of the typographical union's 50th anniversary.

When W.G. Burrows of the International Printing Pressmen and Assistants Union inspected the press in 1939, he said, "I find the plant is modernly equipped and most efficiently operated. I was particularly impressed with the harmony among the workers and the departments. The departments work in the greatest unity as one man for all."

According to the reminiscences of a former pressman who left the Tribune in 1988 after nearly 40 years, 1973 marked the end of the grueling practice of casting printing press plates.

Pressmen poured lead heated to 600 degrees onto the stereotype matrices to form plates for the press. The thermometer in the stereotype room only went to 110 degrees, he said, and in the summer it was always topped out.

A three-story monster made of metal and gears began cranking out newspapers from its current River Drive building in October 1979.

The height of 1970s technology, the press had an onboard computer that was supposed to set the ink.

"But it didn't work half the time," said Tribune pressroom manager Kelly Poitra, so in the early 90s they scrapped it.

Welch started with the Trib 21 years ago, and Poitra is a seasoned 33-year veteran who comes from a family of pressmen.

The entire press crew together has more than a century of experience in the trade, which has seen its share of changes over the years.

Advancements led to the death of the stereotype position when the paper switched to offset printing, and the printer position followed when mid-80s technology allowed advertising and news to create the pages on a computer screen.

A run of the Tribune now takes about 25 minutes.

The Tribune's three-story Goss Metro Double-wide press sits on a foundation of concrete and bedrock to hold its immense weight.

"It's like a big-city press," Poitra said. "It's made to print a million papers every night…They're built like a Sherman tank, and they run forever."

Poitra said the paper bought such a large press on the speculation that Malmstrom would grow and large businesses such as Boeing would make homes in Great Falls, but that boom never materialized.

All of the pressmen wear a whole stack of hats, learning not only operations but also mechanics, maintenance and repair of their mammoth machine.

"It's a hell of a lot to learn, especially when you're running every unit," Poitra said. "It's a skill and it's as tough as any trade. Even tougher in some areas."

Welch recalled one 34-hour shift to change out a vertical drive, a big gear that runs from one level of the press to another.

Tough as it is, the pressroom has some of the Tribune's longest-tenured employees.

"When I was hired in 2000, I don't think that there was another pressman hired — I was the first one in about 13 years … there was no turnover," said Welch. "I replaced a gentleman who was here for at least 38 years."

"It was a good career … It's exciting," said Poitra. "You accomplish something. You just don't print a paper. There's a skill and art in pulling a web (roll of newsprint) through this thing and making it run right."

Outsourced printing isn't a new idea and it's becoming more and more common for small papers to have printing done offsite.

All of the pressmen, even those not on shift, planned to be on hand when the last paper rolled off the line at roughly 8 p.m. Sunday.

Poitra, who recently had his first job interview in 33 years, admitted he might get a little sentimental.

"It's sad to see it go. It's been a great job," said Welch. "I think we're all relieved to know a date now that we're done, and we can move along to the next chapter of life."

RAPID CITY, S.D. — The South Dakota Attorney General reported hitting a deer Saturday night but had actually hit and killed a pedestrian whose body was found the next morning, according to the Department of Public Safety.

Another 217 COVID-19 cases and the COVID-19-related deaths of two more people were reported Thursday morning in Montana.

Another 190 COVID-19 cases in Montana were reported Wednesday morning on the state's mapping and information website.

Another 139 COVID-19 cases in Montana were reported Tuesday morning on the state's case mapping and information website.

The Carbon County attorney is declining to prosecute the shooting death of a Billings man near Red Lodge in April saying the killing was in self-defense.

Montana reported another 86 new COVID-19 cases Monday morning, according to the latest numbers published on the state's COVID-19 mapping and information website.

One man is in the hospital with a gunshot wound after apparently trying to rob a worker delivering a pizza on the South Side Friday night.

Another 139 COVID-19 cases in Montana were reported Tuesday morning on the state's case mapping and information website.

The missing endangered person advisory for Justice T. Conway Griffith has been canceled. Authorities say she has been found and returned to her grandfather.

The Tribune will now be printed in Helena.

The final edition of the Great Falls Tribune printed in Great Falls rolls off the Tribune's printing press Sunday.