For about an hour and 10 minutes on May 22, Gabe Joyes had an extremely critical task to perform.

“I was just lying there holding my blood in,” he said, using his wadded up wind jacket to help contain the flow from an unusual leg injury.

The 36-year-old Lander, Wyoming, teacher suffered a puncture wound while solo trail running. As he jogged downhill with his folded trekking poles in hand, Gabe tripped. The full force of his body falling jabbed one of the pole points into his upper thigh, puncturing about an inch into his flesh.

Luckily, he had cellphone service and was able to call his wife, Jenny. After telling her to stay calm, Gabe said he needed search and rescue immediately. He then described his location not far from town at Sinks Canyon.

Jenny, who is also a trail runner, said she was a little bit confused and panicky at first. She was unsure how urgent the situation was since the information Gabe provided was minimal. Noting her mother’s stressed tone, their 10-year-old daughter Ella said, “We need to get our shoes and jacket on and go,” Jenny recalled. “She picked up on it more than I did.”

Gabe started trail running in about 2006 while working at a summer camp in the Boulder River drainage, south of Big Timber. He found he could see more places quickly by abandoning his heavy backpack and instead jogging up and down mountain trails.

In 2008 he moved to Lander where the Wind River Range is in the backyard. Soon, he was running across the high-mountain trails there, when he didn’t have time for three-day backpacking trips. On big days he may cover 30 to 40 miles. In races he may travel 60 to 100 miles in about 19 to 22 hours, depending on the terrain.

“Trail running for me was a nice alternative to hyper competitive team sports,” said the former college soccer player. “It’s an escape and reset for me. And it can be as competitive or as recreational as I want it to be.”

About five years ago, he began coaching other trail runners as more people took up the sport. A coach, he noted, can reduce the learning curve and help a runner find the balance between being fit and not working out so much that there are injuries, or so little that there are safety issues.

“It’s really challenging getting the balance right, the same with eating and drinking and sleeping,” he said.

In the spirit of advising his students and other trail runners about his mishap, Gabe posted a blog about his accident, along with graphic photos. His detailed writing is at times unsettling, like his account of how bad the injury was.

“I took a look at myself and was horrified to see blood pulsating out of my shorts at a flow rate that did not even seem possible — something more akin to a bubbling faucet,” Gabe wrote.

The average amount of blood in a human body is around five liters. One doctor told Gabe he may have lost two to three liters.

“It was just absolutely shocking and horrifying,” Gabe said. “How do you lose blood that fast? I only had a few moments to panic. Then it was time to get down to business. Otherwise, I wouldn’t have a story to tell.”

Although his main task was trying to staunch the bleeding, at the same time he is the type of guy who doesn’t do well with the sight of blood. So Gabe attempted to distract his mind as much as possible.

“I was very concerned about passing out, because then I couldn’t keep pressure on the wound,” he said. “I was trying to normalize the situation a little bit.”

So he told himself it wasn’t a big deal and that he would be OK.

He even snapped selfies of himself and the wound which he later posted with the blog, titled “Accidents happen.” The photos show his running shorts and the lower half of his T-shirt soaked with blood, as well as the ground underneath him.

“I can hardly look at them anymore,” he said. “It almost makes me sick.”

After calling search and rescue, Jenny loaded her two daughters – Ella and 6-year-old Cora – into the car and began driving to the Sinks Canyon trailhead. Along the way she had to pull over to make phone calls, including one to Gabe to let him know help was on the way. Then his phone stopped working. It would ring with no answer.

“I was worried maybe he had died at that point,” Jenny said, her voice quivering. “That was a really scary moment.”

Arriving at the parking area, Jenny was torn between running up the trail to her husband and staying with her distressed children. The tension left her delirious and sobbing as her daughters also cried.

It was a two-mile drive on a four-wheel drive road for the search and rescue to reach Gabe. Luckily, another search and rescue member happened to be in the area and responded, reaching the injured trail runner about 10 minutes before a helicopter arrived to evacuate him.

Meanwhile, Jenny talked to the sheriff’s deputy seeking information. He told her it was good news that the rescuers weren’t calling for a coroner.

Wearing only running shorts, a T-shirt, vest and wind jacket, Gabe was lightly clothed. Luckily, the first person on scene had a tarp he could wrap around Gabe to keep him warm as the blood loss started to lead to hypothermia. Once the helicopter had GPS coordinates, they flew up and EMTs took over.

“From there things start to become a crazy blur…the most badass EMTs imaginable sliced my shorts right off, put unbelievable pressure on my wound (this hurt more than the initial pole impact), rammed 16-gauge IV needles into my arms, all while quietly and calmly whispering into my ears ‘don’t worry we’ll get you the good drugs soon,’ Gabe wrote. “They came through on their promise, and once I was on a stretcher and covered up the ‘good drugs’ took me to what I can only describe as warm-magical-melting ice cream-world. I came back to reality maybe 20 or 30 minutes later on our way to Casper. Things were challenging from that point on of course, but really from the moment those EMTs showed up I knew I was able to let go and just let them take over — for I had endured.”

With Gabe airborne to the Casper hospital, Jenny returned home and rushed to pack overnight bags for everyone.

She was about an hour-and-a-half into her drive east when the phone rang.

“I was worried I would get bad news,” she said. “I had no idea what I was going to be told when I got there.”

Luckily, it was Gabe letting her know he was OK.

It wasn’t until about 9 or 10 p.m. that she finally got to see him, stitched and hooked up to IVs and monitors. Amazingly, his blood level wasn’t quite low enough to require a transfusion, so the doctors released him after less than 24 hours. Standing up to leave, Gabe realized he’d also torn a calf muscle in the fall, which he said didn’t seem physiologically possible.

The blood loss left him anemic and weak, with low energy and short of breath. He’s been back to his local health clinic at least twice, initially worried that he may have developed a blood clot. Psychologically, he said he’s suffered from flashbacks of blood gushing out of his leg.

Looking back, Gabe’s biggest regret is that he left an emergency locator beacon in his car because he was running so close to home. The devices send out an immediate SOS to rescue agencies, including the exact GPS coordinates.

Slowly, he’s working his way back into the sport, trying to create more happy memories to replace the horror he had suffered through.

“Trail running is a happy, wonderful part of my life,” he said, as well as an activity he enjoys sharing with Jenny. “For us to stop doing that would be life changing.”

Jenny agreed. “I wasn’t sure how that would feel, but it was good,” she said.

As the pain fades and Gabe makes mental lists about what he did wrong — not carrying the emergency locator, running without any first-aid kit, not carrying a warmer layer and now advocating for use of rubber-tipped trekking poles — the couple is willing to share their tale in hopes that others may avoid a similar tragedy.

She’s looking forward to lots of time in the mountains this summer and relaxing.

Winning the jury meant showing that any reasonable person would have quit under the conditions the trooper's supervisors imposed on him, attorney Karl Knuchel said.

In the last seven days, the National Weather Service issued four red flag warning days for western Montana, which warns of the most potent conditions for current fires and potential sparks.

"I urge the Montana Supreme Court to reconsider its role in light of Dobbs and return policymaking to the Legislature," Gov. Greg Gianforte wrote in a tweet.

The three candidates running for Montana’s new western U.S. House seat will meet in a debate in Missoula on Monday.

A single presumptive case of the virus was found in an adult in Flathead County.

The event was the first time all three appeared together in a forum.

'Yellowstone' seeks extras for filming in Helena on Aug. 24

The television show "Yellowstone" put out an online open casting call on Monday, seeking local talent to work as extras for filming in Helena on Aug. 24.

Anchor Ranch for sale on Hi-Line: Property was at center of access dispute, land exchange

Anchor Ranch, purchased by Wilks Ranch Montana Ltd. in 2012, has been offered for sale for $33.96 million.

Twenty seven groups filed the petition with the U.S. Fish and Wildlife Service requesting that the agency disqualify Montana and Idaho from receiving funding from the Pittman-Robertson Act 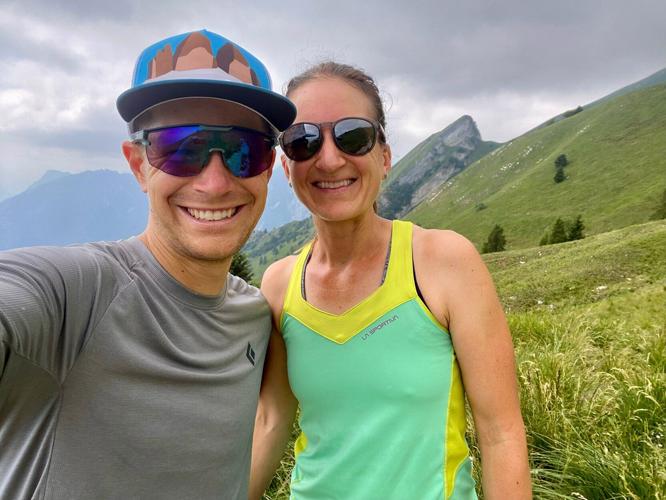 Gabe and Jenny Joyes enjoy mountain trail running together. Since both are teachers, they have plenty of time in the summers to hit the trail. 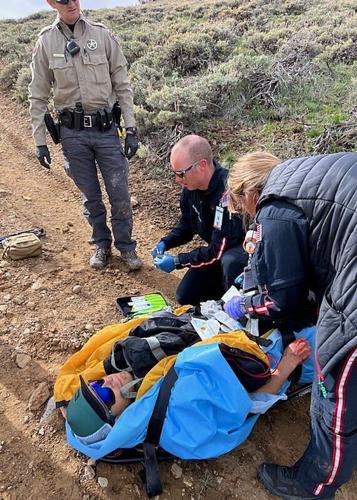 EMTs and a sheriff's deputy respond to help prepare Gabe Joyes for a helicopter rescue from the Sinks Canyon area near Lander, Wyoming. 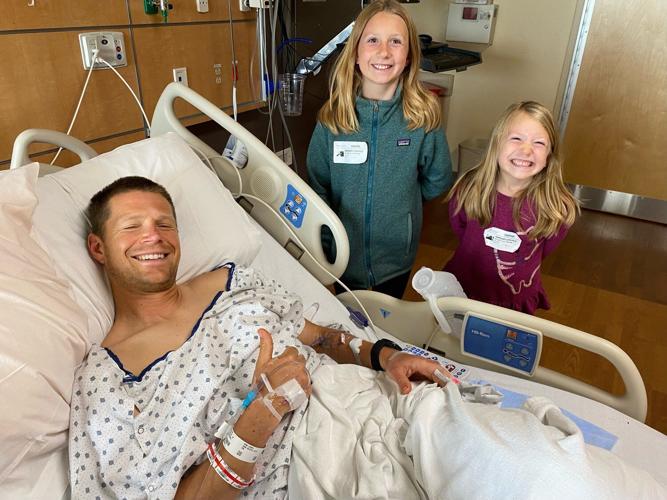 Gabe Joyes and his daughters, Ella and Cora, pose for a photo in the hospital not long after Gabe severely injured his leg while trail runninig. 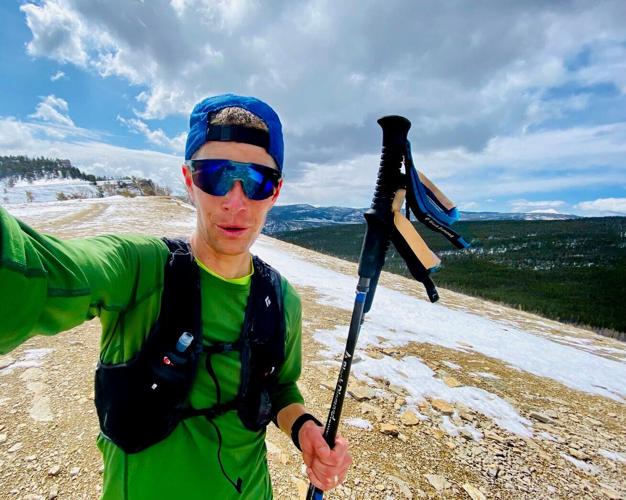 Gabe Joyes started trail running while working at a summer camp in the Boulder Valley, south of Big Timber. Since then he's begun teaching other runners about the sport. 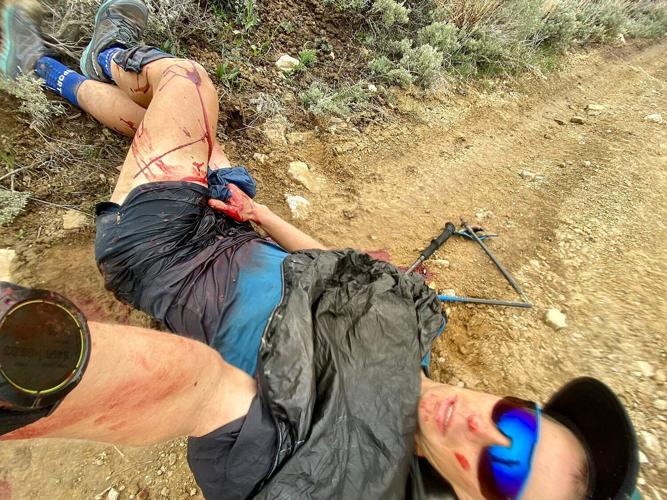 To help distract him from the situation at hand, Gabe Joyes even took selfies while lying in the old four-wheel-drive road bleeding heavily. 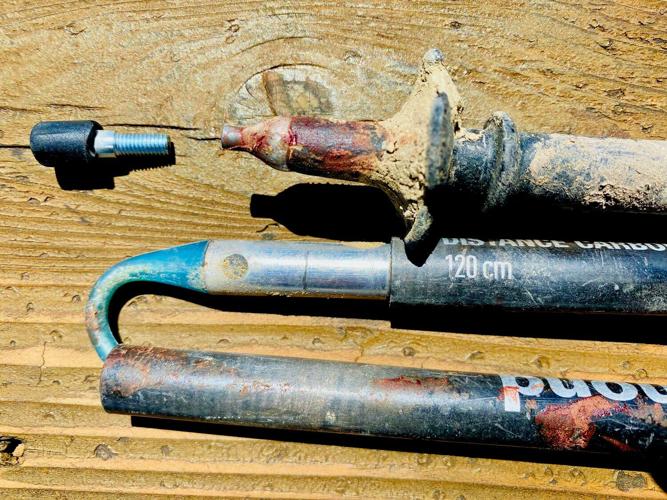 One of the big takeaways from Gabe Joyes' nearly fatal accident is he now recommends everyone use rubber-tipped trekking poles for safety. 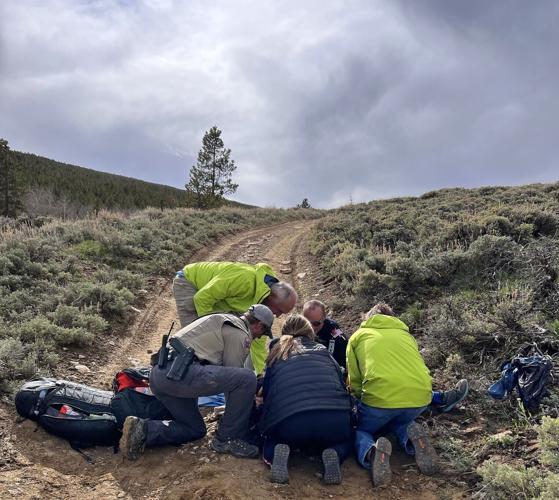 EMTs, search and rescue members and a sheriff's deputy crowd around Gabe Joyes as he's prepared for an evacuation flight to the Casper hospital.