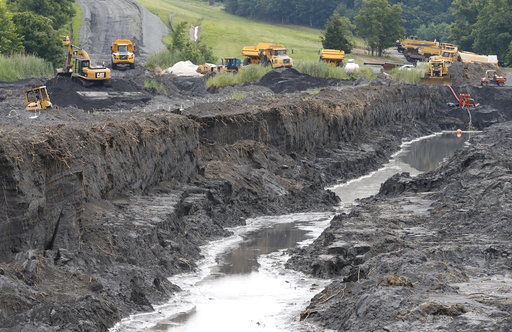 FILE- In this June 26, 2015 file photo, trucks haul coal ash from one retention pond to a permanent pond at the Dominion Power's Possum Point Power Station in Dumfries, Va. Major utilities are finding evidence of groundwater contamination at coal-burning power plants across the U.S. where landfills and man-made ponds have been used for decades as dumping grounds for coal ash. Data the utilities must publish by Friday, March 2, 2018, show heightened levels of arsenic, radium and other hazardous materials have been found at plants in numerous states, from Virginia and North Carolina to Montana and Alaska. (AP Photo/Steve Helber, File) 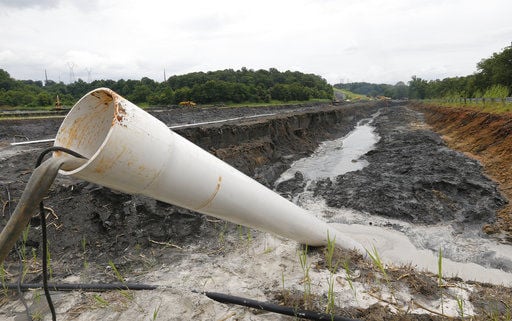 A drain pipe sticks out of a coal ash retention pond at the Dominion Power's Possum Point Power Station in Dumfries, Va., in 2015. Major utilities are finding evidence of groundwater contamination at coal-burning power plants across the U.S. where landfills and man-made ponds have been used for decades as dumping grounds for coal ash. Data the utilities must publish by Friday, March 2, 2018, show heightened levels of arsenic, radium and other hazardous materials have been found at plants in numerous states, from Virginia and North Carolina to Montana and Alaska. (AP Photo/Steve Helber, File) 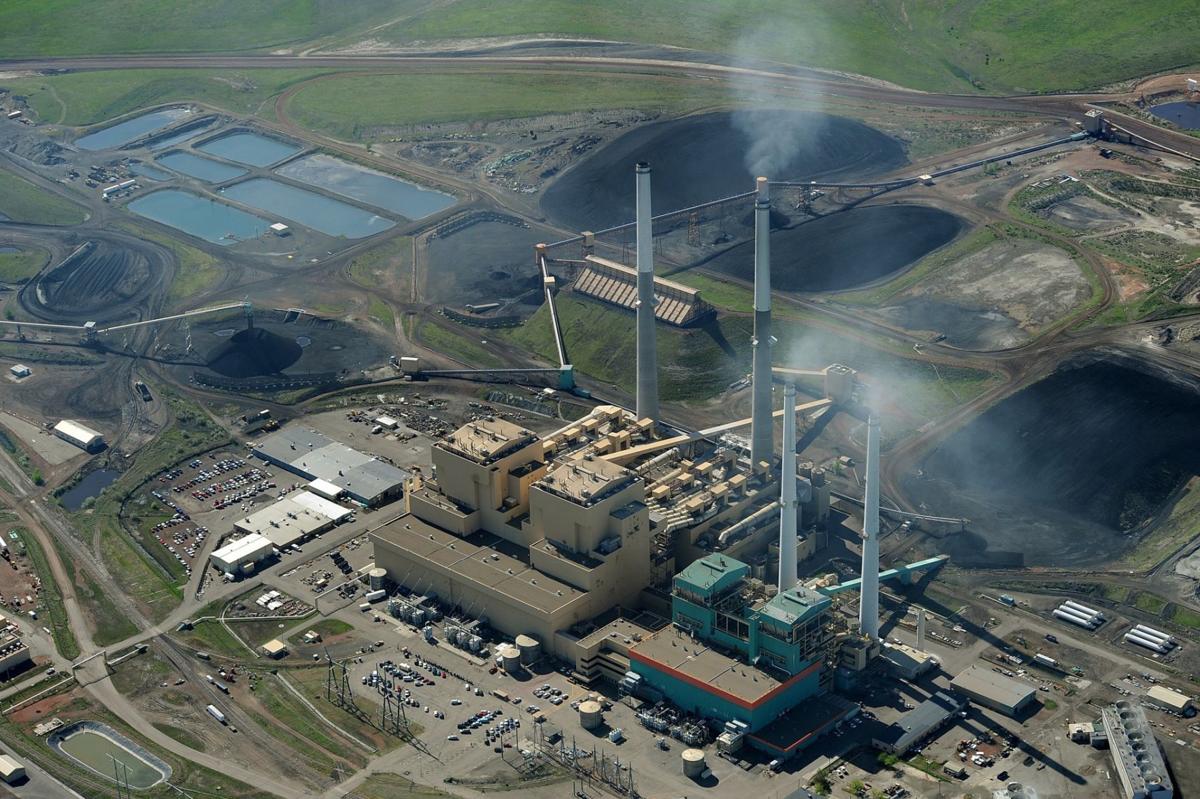 Major utilities have found evidence of groundwater contamination at coal-burning power plants across the U.S. where landfills and man-made ponds have been used for decades as dumping grounds for coal ash, according to data released by plant owners under a Friday deadline.

Heightened levels of pollutants — including arsenic and radium in some cases — were documented at plants in numerous states, from Virginia and North Carolina to Washington and Alaska.

The Environmental Protection Agency required the plant owners to install test wells to monitor groundwater pollution as a first step toward cleaning up the sites. The future of that effort was cast into uncertainty Thursday when the Trump administration announced it intends to roll back aspects of the program to reduce the industry's compliance costs by up to $100 million annually.

"There's no dispute that the underlying groundwater is being contaminated. We see that clearly," said Duke University professor Avner Vengosh, who researches the effects of coal ash and has reviewed some of the new data. "The real question is whether it's migrating toward people or wells next to (coal plants)."

Vengosh added that the discovery at some sites of radium at levels far exceeding drinking water standards — which can increase the risk of cancer — were of particular concern. It appears to mark the first time coal ash has been associated with radioactivity in groundwater, he said.

Duke Energy spokeswoman Erin Culbert noted that government-sponsored research has shown most coal ash does not have radioactive elements, and the issue does not represent a health concern for neighbors of its plants.

The Associated Press conducted an initial review of the reports, which were still being filed Friday, and spoke with power company executives across the country, who warned against misinterpreting the pollution data. Generally, they said further studies were needed to confirm the ash storage sites as the source of the contamination and whether public drinking water supplies were threatened.

U.S. coal plants produce about 100 million tons annually of ash and other waste, much of which ends up in old, unlined disposal ponds that are prone to leaking. Some have been in use for decades.

"These (monitoring) wells that are close to the sites are telling us something, and we are committed to doing the hard work and to understand where the real source is and what it is," McCullough said.

Pam Faggert, the chief environmental officer for Richmond, Virginia-based Dominion, said the company also conducts surface water tests near its facilities and was confident that the groundwater impacts were not having an effect on public drinking water or public safety offsite.

Coal ash storage and disposal went largely unregulated until a 2008 spill at a Tennessee Valley Authority power plant in Kingston, Tennessee. A containment dike burst and flooding covered more than 300 acres, dumped waste into two nearby rivers, destroyed homes and brought national attention to the issue.

In 2014, an estimated 39,000 tons of coal ash spewed into the Dan River after a drainage pipe running below a waste dump collapsed at a Duke Energy plant in Eden, North Carolina. The toxic sludge turned the river gray for more than 70 miles.

Apart from spills, other ash problems have been documented across the country.

In Montana, an estimated 200 million gallons of contaminated water a year are leaking into the groundwater from ash ponds in the city of Colstrip, leaving the water undrinkable.

In North Carolina, some neighbors of Duke power plants have been relying on bottled water since toxic chemicals appeared in some of their wells.

In Virginia, Dominion has offered to hook some neighbors of the Possum Point Power Station up to municipal water or filtration systems after groundwater testing found elevated levels of some contaminants.

AEP has closed six ash storage sites to date, the company said. Duke Energy has started excavation work at 11 sites and had spent $1.4 billion on such efforts through last December, the company disclosed last week. It plans to spend another $2.5 billion on ash site closures over the next five years.

Attorney Frank Holleman with the Southern Environmental Law Center said the disclosure of the utilities' data was critical to informing the public about how much arsenic, mercury and other pollutants are leaking into groundwater supplies. He pushed back against the utilities' argument that the data so far has been largely indicative of on-site contamination, not a broader public health threat, saying groundwater doesn't stay in one place — it moves and flows.

"The groundwater resources of these communities are not something that the utilities have a right to trash and throw away," he said. "They don't own the groundwater. That's a public resource."

At Blackfoot Communications in Missoula, employees get 14 holidays per year on top of their paid vacation and sick leave. They also get a pens…