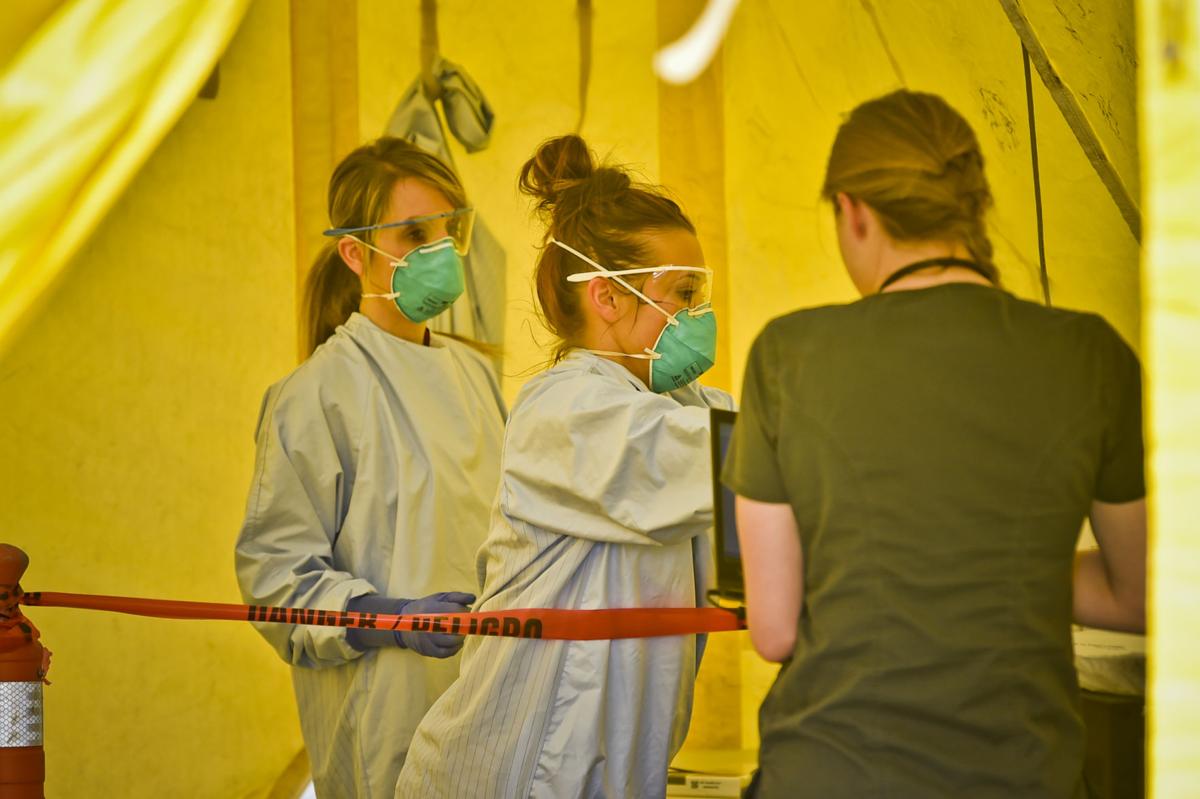 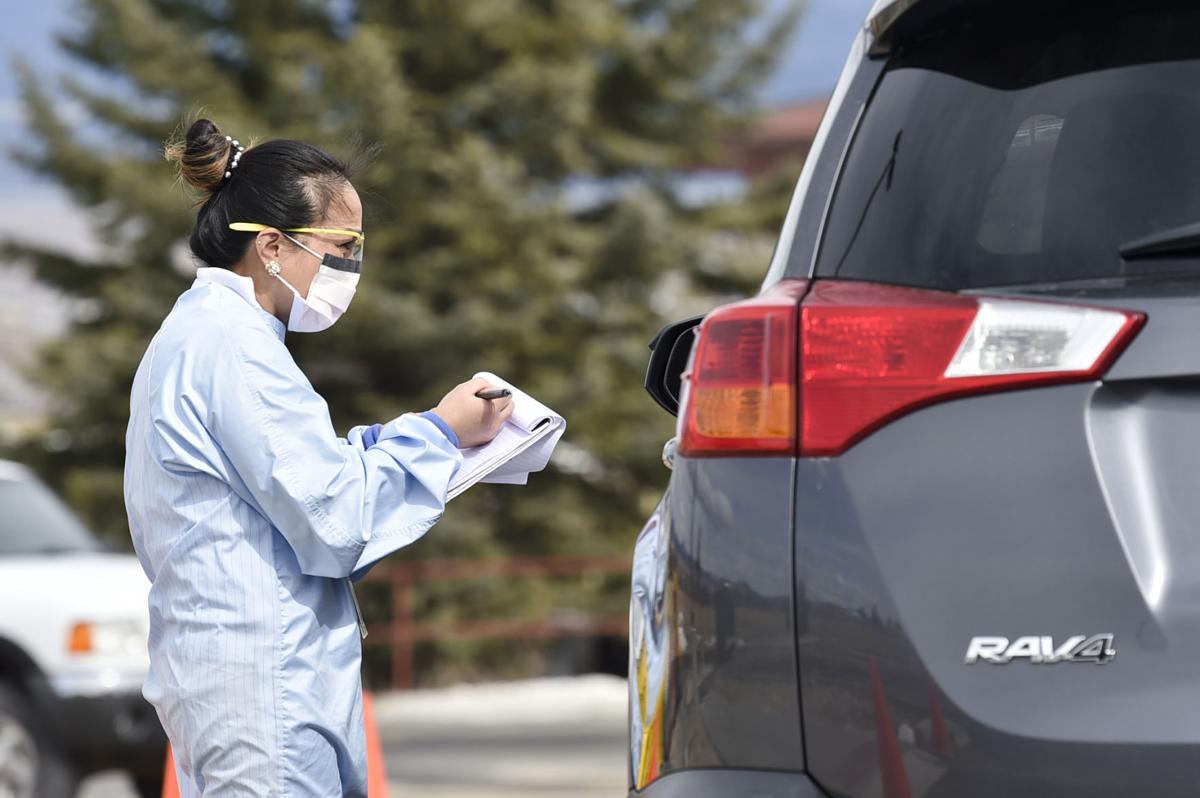 A health care worker tests a patient for COVID-19 at a drive-up testing facility at St. Peter's Health on Tuesday in Helena.

Montana Gov. Steve Bullock, under the powers of an emergency declaration he made earlier this month, told counties on Wednesday they can choose to conduct an all-mail election in the June primary.

The moves come as Montana is dealing with the spread of the COVID-19 virus, which reached 68 cases statewide Wednesday, a jump of 30% from the previous day.

Urban, more populated counties, have been hardest hit, and especially Gallatin County. Gallatin now has now has 24 known cases, twice what the next closest county has and more than a third of the state's total cases. Nearly 2,200 people have been tested at the state lab in Helena, though providers can also send tests to private labs.

Bullock's election order comes after several candidates in the June primary called for it. Last week Secretary of State Corey Stapleton said his office was taking a "pause" to consider how to proceed. Bullock's office said Wednesday it made the decision in consultation with Stapleton, county election administrators, public health experts, emergency management professionals and political leaders from both parties.

“This is about protecting Montanans’ right to vote at a time we face unprecedented challenges with the COVID-19 pandemic,” Bullock said in a press release. “Locally elected officials best understand the voting needs of their communities, and taking this action now ensures they will have the time to make the right decisions for their localities. I feel confident we can protect both the public’s health and the right to vote with this direction.”

In the press release from the governor's office, Republican Speaker of the House Greg Hertz, of Polson, said he supported Bullock's decision.

“This directive allows counties to choose what is best for their voters and election staff during this state of emergency,” Hertz said in a statement.

While early absentee ballots won't be sent out until May, there are other statutory deadlines and other requirements to prepare for elections that counties face in coming weeks.

Even if a county decides to hold an all-mail June primary election, people can still vote in person during the 30-day early voting window.

Counties must submit plans to the state if they choose to conduct the June primary by mail. Those mail ballots would be released May 8. Early voting would be available in person through the close of the primary June 2.

Voters would not have to pay postage to return ballots by mail.

The social distancing would mean counties must ensure a minimum of 6 feet between people at polling locations, designated drop-off locations or public-facing portions of facilities involved in voting.

Additionally, the directive extends regular voter registration up until 10 days before the election, giving people time to space out that process to avoid crowding facilities.

Bret Rutherford, Yellowstone County elections administrator, said he was going to request an all-mail ballot even before Bullock’s order came down. He’s been talking with his counterparts around the state and thinks the vast majority of counties will opt in as well.

Rutherford said he’s always been supportive of conducting elections by mail, and that 85% of active registered voters in Yellowstone County are already signed up to do so, rather than going in to the polls.

“I’m all about mail ballot," he said, "and then you throw a pandemic in on top of it” and the benefits are even clearer.

Rutherford said his office already has the infrastructure and know-how to move forward with mail-only ballots this spring. His office always keeps a backstock of the necessary envelopes.

Also Wednesday, Bullock requested a waiver from the federal government to give Montana regulatory flexibility to make changes to expand capacity and ease access to health services that are available through Medicare, Medicaid and the Children's Health Insurance Program, or CHIP.

The waiver asks the Centers for Medicare and Medicaid Services to let health care providers in the state change their operations as needs evolve, such as setting up alternative testing sites.

It will also speed enrollment for new Medicaid, Medicare and CHIP providers and reduce administrative burdens, as well as allow providers to share information to trace the spread of the virus and speed up patient care.

Montana is already under orders closing K-12 public schools and shuttering businesses where people congregate like bars, gyms and theaters, while allowing grab-and-go options for things like restaurants and coffee shops, to April 10.

The governor has also prohibited nonessential social and recreational gatherings of more than 10 people outside a home or place of residence, if a distance of at least 6 feet between people cannot be maintained. He also told stores to follow rules keeping people 6 feet apart, though he exempted essential places like grocery stores, health care facilities and pharmacies.

Two horsemen on a recent trip into the Bob Marshall Wilderness said they found something they never expected: a couple fishing on a sandbar of the South Fork of the Flathead after allegedly landing a helicopter there.

Melisia Muscat had been thinking of moving to Billings for about a year, but COVID-19 sealed the deal.

Six new cases are in Big Horn County and the other two are in Gallatin and Missoula counties.

From Saturday to Sunday the state added 10 new COVID-19 cases.

A Hamilton man was charged Tuesday with two felony counts in connection with an alleged threat to commit a mass shooting.

Flathead County officials have released the name of a man who was shot and killed Sunday evening during a standoff with law enforcement officers who responded to a disturbance at a residence between Kila and Marion.

1 dead, others injured in Amtrak train crash on Hi-Line in Montana

One man is dead and multiple people are injured after an Amtrak passenger train hit a tractor near Bainville in Roosevelt County.

'It's kind of a scary time': Glacier-area businesses await reopening

Business owners in the Glacier National Park area shared their concerns with U.S. Sen. Steve Daines at a discussion in West Glacier Friday.

Next week marks a monumental shift in Montana's medical marijuana industry, as patients previously tied to one provider will be "untethered" and allowed to purchase cannabis at any dispensary in the state.

The Montana Department of Corrections is looking for an inmate who escaped from the Montana State Prison.

A health care worker tests a patient for COVID-19 at a drive-up testing facility at St. Peter's Health on Tuesday in Helena.