Multiple environmental interest groups said Wednesday they will sue the state of Montana over new wolf management laws due to concerns about federally protected grizzly bears and Canada lynx.

Earthjustice, representing Center for Biological Diversity, Friends of the Clearwater, Humane Society of the United States, International Wildlife Coexistence Network, Sierra Club, Western Watersheds Project, Wilderness Watch and Wolves of the Rockies, sent a 60-day notice of intent to sue to Montana Gov. Greg Gianforte, Montana Fish, Wildlife & Parks Director Hank Worsech, and the Montana Fish and Wildlife Commission. The notice alleges that new laws expanding wolf trapping could lead to unintentional injuries and killings of grizzlies and lynx, which are both listed as threatened under the Endangered Species Act. 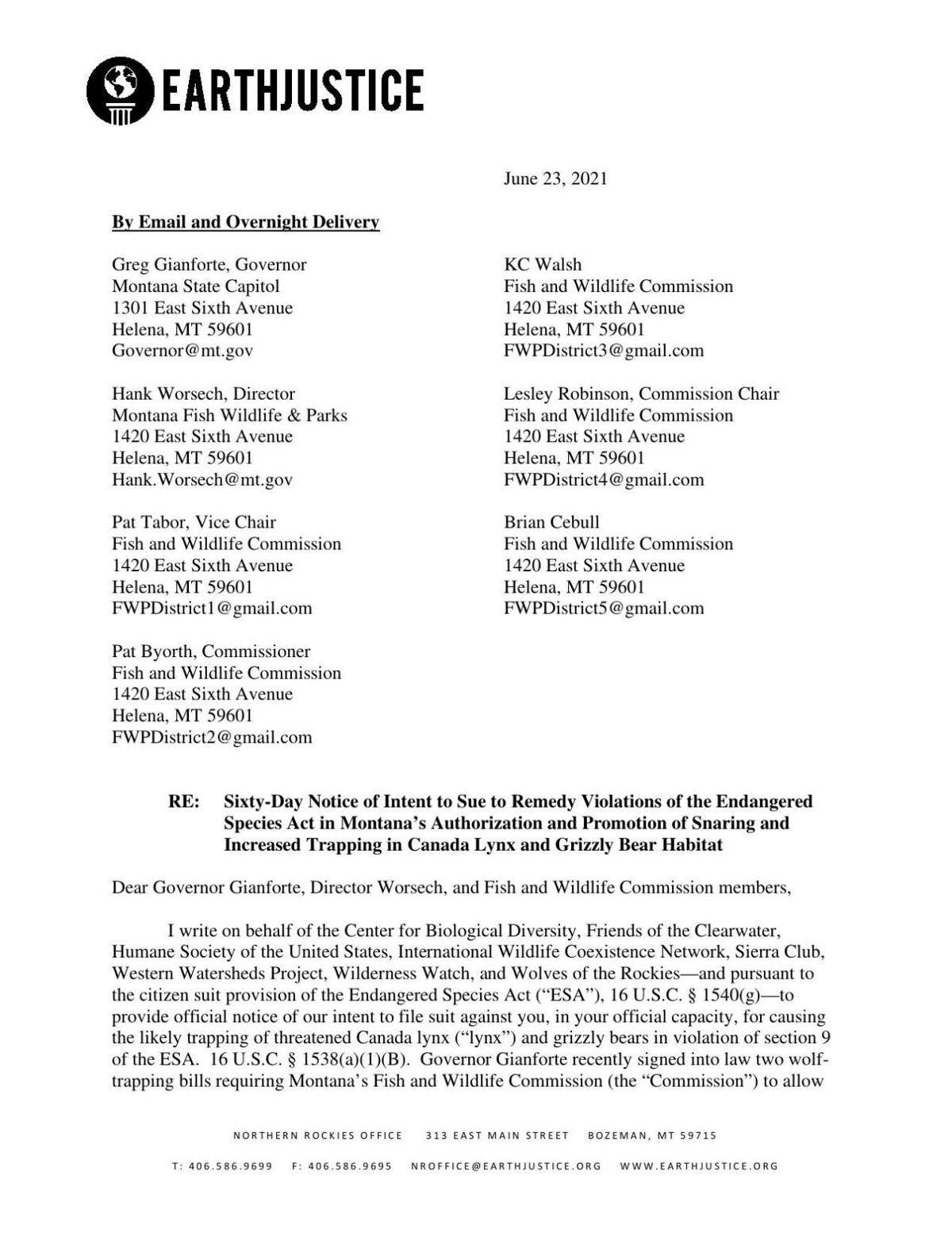 “Lynx, grizzly bears and gray wolves all inhabit similar habitat types and geographic range across western Montana, and wolf trapping therefore frequently occurs in areas where lynx and grizzlies are also present,” the notice states. “Moreover, because snares and traps are imprecise tools, they pose a substantial risk to non-target species, including lynx and grizzlies.”


The notice came the day before the commission was set to consider implementation of multiple new wolf bills passed by the 2021 Legislature and signed into law by Gianforte. The laws mandate the allowance of snares to capture wolves; extend wolf trapping seasons with some commission latitude to shorten seasons regionally; and direct FWP and the commission to reduce that state’s wolf population of 985 wolves including suggested methods such as hunting wolves at night on private land, baiting and increased bag limits. Recommendations from FWP propose a number of provisions aimed at reducing incidental trapping of non-target animals, including lynx and grizzlies.

Andrea Zaccardi with the Center for Biological Diversity said the timing of the notice was intentional for wildlife managers and commissioners to consider during Thursday's meeting. 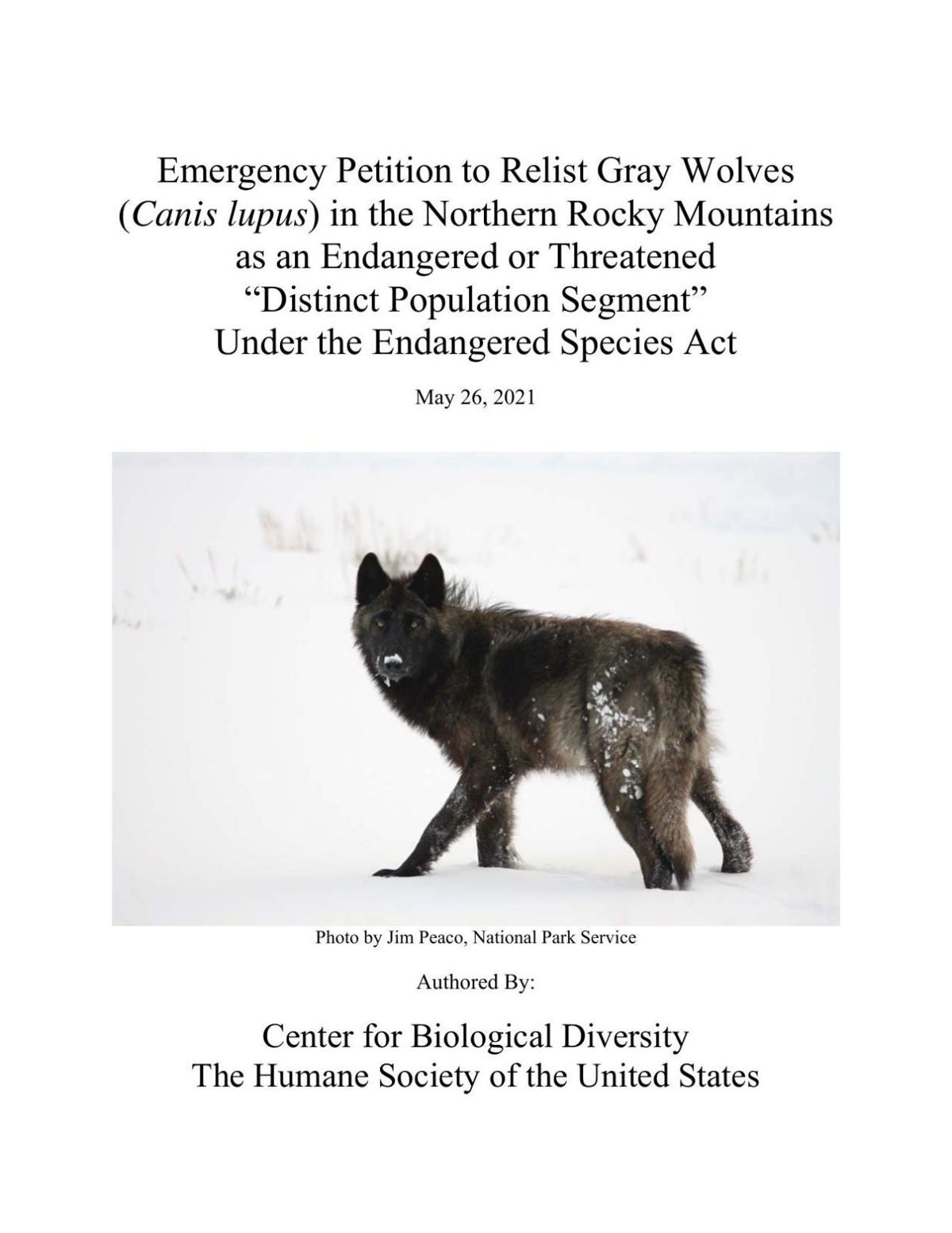 Environmental groups have also filed petitions asking federal authorities to invoke emergency protections for wolves due to laws in Montana and Idaho, which they claim could drive populations below viable levels.

FWP spokesman Greg Lemon declined to comment on the notice of intent to sue due to the possibility of litigation. He has previously said the agency remains confident in its ability to manage wolves as it does other wildlife in a sustainable way but with the direction levied by lawmakers and the governor. 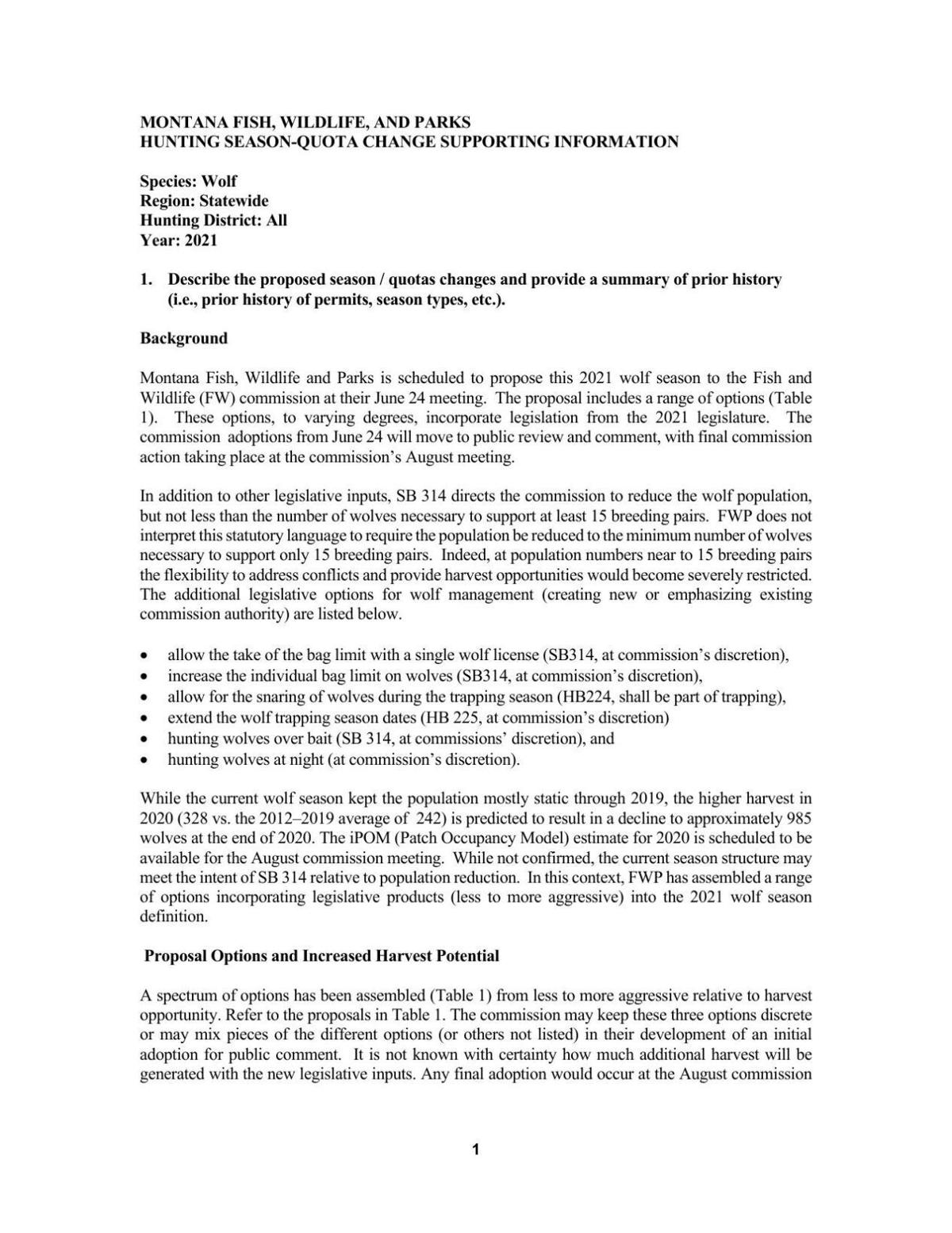 The agency released a 17-page document recently of recommendations and options for the commission to consider Thursday. The commission is expected to adopt draft wolf regulations to be released for public comment with final adoption expected later this summer.

The proposal makes several recommendations to reduce conflicts specifically with grizzly bears and lynx. Those include a requirement that the commission meet should meet to consider adjustments should a grizzly or lynx be trapped. Expanded season dates should only apply to areas with low grizzly bear populations and outside of lynx protection zones. Another recommendation says wolf snaring should only be allowed on private land and that regulations require snares to be modified in such a way as to reduce the chances of capturing other animals.

Lemon clarified that the private land recommendation would be a one-year regulation while snaring is added to the state’s required wolf trapping class.

The recommendations also specify how wolf snares should be set to avoid non-target animals, including placing the loop at least 18 inches above the ground, a stopping device that halts the snare from closing completely on smaller animals, and a device allowing the snares to “relax” in lynx protection zones.

In 2015 the state of Montana entered into a settlement with environmental groups that included specific trapping regulations to protect lynx in northwest Montana and around Yellowstone National Park. Those regulations include restricting the type of bait, size and modifications to traps, and mandatory trap checks every 48 hours.

To date, a more than a dozen lawsuits have stemmed from this year’s Legislature, with 10 filings challenging 11 new laws. One has been decided, with the state Supreme Court upholding the governor's new power to directly appoint judges to fill vacancies. Two others were dismissed by the high court to be filed in lower courts, where they and the other challenges are working through the legal process.

The law has made Montana the only state in the country that prohibits private businesses from requiring employees to get vaccinated.

The pressure loss left Crossroads Correctional Center without drinkable water and unable to flush the toilets in their cells.

Sen. Jason Ellsworth will receive a one-year deferred sentence for the charge, meaning it will be wiped from his record if he remains law-abiding for the next year. He was also ordered to pay a $350 fine and an $85 surcharge.

The employees involved were transported to an outside hospital and have been released.

Montana Democrats now have a U.S. House candidate in the eastern part of the state.

Seventy-seven residences in Polson went without water for about 12 hours as the city's water reserves dipped.

EXPLAINER: How Montana will use funds to limit evictions

Roughly 3.6 million people in the U.S. as of July 5 said they face eviction in the next two months, according to the U.S. Census Bureau's Household Pulse Survey.