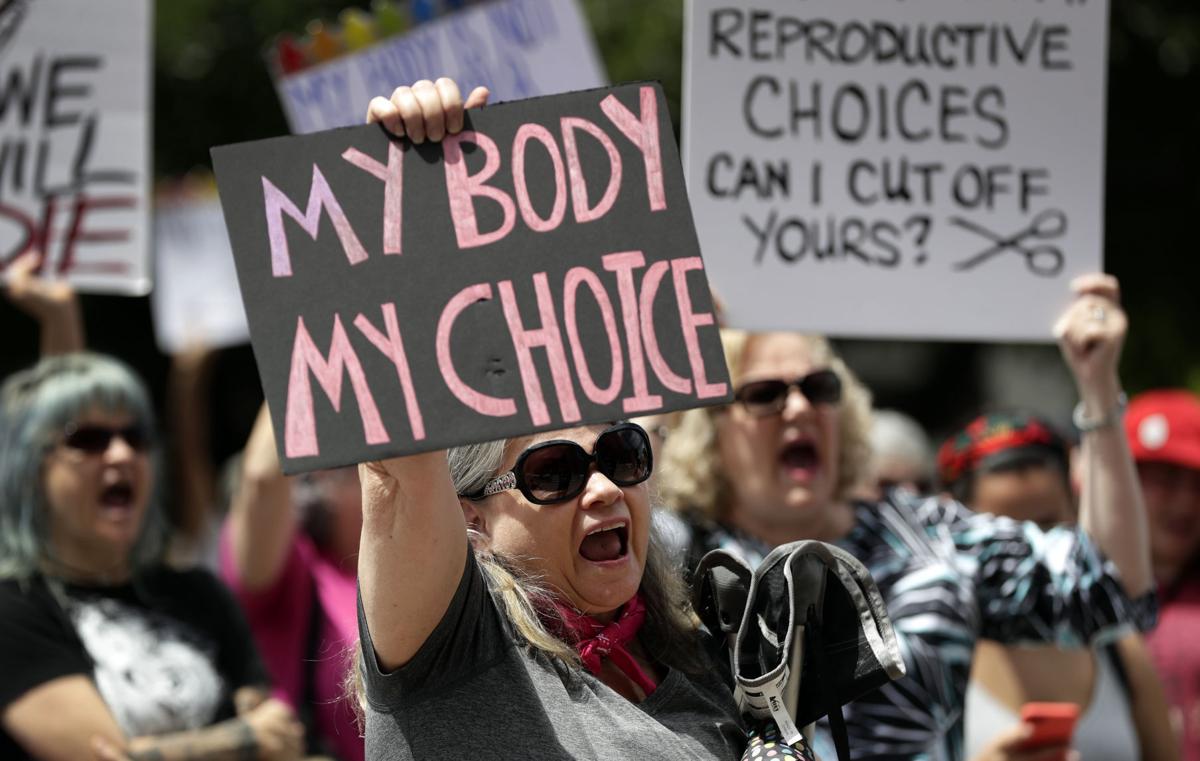 FILE - A group gathers to protest abortion restrictions at the State Capitol in Austin, Texas, Tuesday, May 21, 2019. Abortion rights advocates say the pandemic has demonstrated the value of medical care provided virtually, including the privacy and convenience of abortion taking place in a woman’s home, instead of a clinic.(AP Photo/Eric Gay, File) 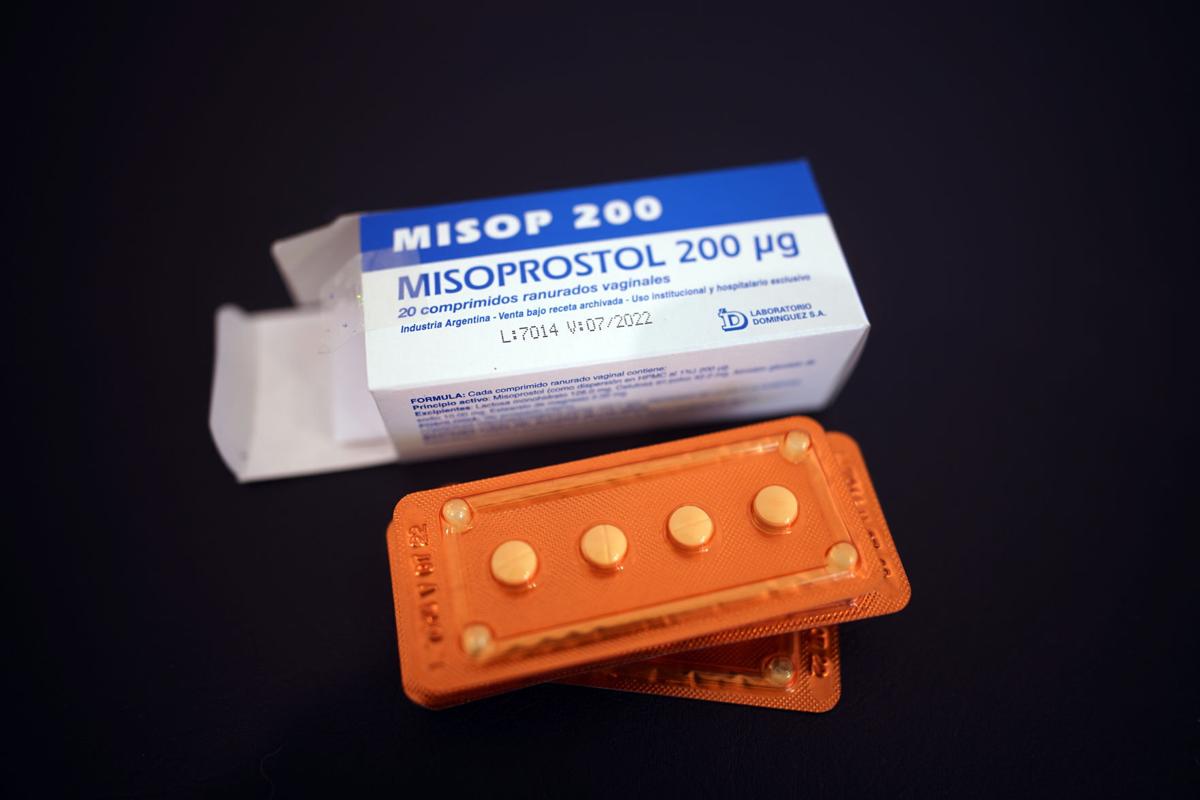 FILE - Misoprostol drug, the most common abortion pill, sits on a gynecological table at Casa Fusa, a health center that advises women on reproductive issues and performs legal abortions in Buenos Aires, Argentina, Friday, Jan. 22, 2021. Misoprostol empties the uterus by causing cramping and bleeding. The drugs are approved for use by the FDA up to 10 weeks of gestation. (AP Photo/Victor R. Caivano, File)

Medication abortion accounts for about 40% of all abortions in the U.S. The increasingly common method relies on pills rather than surgery, opening the possibility for abortions to be done in a woman's home rather than a clinic. It's an option that has become important during the COVID-19 pandemic.

As Republican states move to restrict access to abortion generally, many of them also are limiting access to medication-induced abortions.

HOW DOES MEDICATION ABORTION WORK?

Medication abortion has been available in the U.S. since 2000, when the Food and Drug Administration approved the use of mifepristone.

A medication abortion consists of taking mifepristone, waiting 24 to 48 hours, and then taking misoprostol. Mifepristone blocks the hormone progesterone, which is essential to sustain a pregnancy. Misoprostol empties the uterus by causing cramping and bleeding.

The drugs are approved for use by the FDA up to 10 weeks of gestation.

The method is considered by health professionals to be highly effective and safe, with pregnancies terminated in more than 95% of cases and serious complications in 0.4% of cases.

According to the FDA, 3.7 million women used medication abortion between 2000 and 2018. In that period, 24 women died after taking mifepristone.

The method's popularity has grown steadily. The Guttmacher Institute, a research organization that supports abortion rights, estimates that it accounts for about 40% of all abortions in the U.S. and 60% of those taking place up to 10 weeks' gestation.

WHY IS IT IMPORTANT?

Abortion rights advocates say the pandemic has demonstrated the value of medical care provided virtually, including the privacy and convenience of abortion taking place in a woman's home, instead of a clinic.

Adding to its appeal: Clinics are few and far between in several states where Republicans have passed strict laws limiting access. Mississippi, Missouri, North Dakota, South Dakota and West Virginia are states that have just a single abortion clinic.

Abortion providers say as access to clinics becomes more difficult, medication abortion can allow women to get abortions without facing the burden of traveling, which can be especially difficult and expensive for lower-income women.

WHAT ARE STATES DOING TO RESTRICT IT?

States have passed several measures to limit its availability. These include outlawing the delivery of abortion pills by mail, shortening the 10-week window in which the method is allowed and requiring women take the pills in a clinic rather than at home.

Some states also require doctors to tell women undergoing drug-induced abortions that the process can be reversed midway through, a claim critics say is not supported by science.

In 33 states, only physicians are allowed to provide abortion pills. In 17 states and the District of Columbia, they can be provided by advanced-practice clinicians.

Clinicians providing the medication must be physically present when it is administered in 19 states, meaning abortion patients cannot take the drugs at home.

Republican governors in Arkansas, Arizona, Montana, Oklahoma and Texas signed laws this year prohibiting abortion drugs from being delivered by mail. Such laws were largely seen as a response to the rise in popularity of telemedicine during the pandemic.

The laws face legal challenges in Montana and Oklahoma. In Ohio, a judge temporarily blocked a law that would have banned the use of telemedicine for abortion pills while a legal challenge is underway.

The Texas law is set to take effect in December. It passed just as Texas began banning nearly all abortions under a more far-reaching law, known as Senate Bill 8, which has become the nation's biggest curb to abortion in a half-century.

CAN MEDICATION ABORTION BE REVERSED?

Eight states require counseling to promote the idea that medication abortion can be reversed through a high dose of progesterone after taking mifepristone. The American College of Obstetricians and Gynecologists does not support prescribing progesterone for that use and says the reversal claim is not based on scientific evidence.

Such laws are in effect in Arkansas, Idaho, Kentucky, Louisiana, Nebraska, South Dakota, Utah and West Virginia. Court cases in Indiana, North Dakota, Oklahoma and Tennessee have blocked enforcement of these counseling requirements. In Montana, the law is set to take effect Oct. 1 but is being challenged in court.

WHAT ARE THE FEDERAL RULES?

At the onset of the coronavirus pandemic, the Food and Drug Administration -- under federal court order -- eased restrictions on abortion pills so they could be sent by mail.

But the FDA and its parent health agency, under the Trump administration, later argued the rules were necessary to ensure the pills were used safely. The rule requires patients to pick up the single tablet of mifepristone at a hospital, clinic or medical office and sign a form that includes information about the medication's potential risks.

The obstetricians and gynecologists association sued to overturn the rule, setting off a series of conflicting court decisions.

Last April, the FDA again affirmed that women seeking an abortion pill would not be required to visit a doctor's office during the COVID-19 pandemic. The policy change applies only in states where there are no laws banning the use of telemedicine or requiring a physician to be present when the drugs are taken.

WHAT ARE WOMEN'S OPTIONS?

Aid Access is one of several online initiatives that is offering to send women abortion pills by mail. It is led by Dr. Rebecca Gomperts, a Dutch physician.

The FDA, then under the Trump administration, sent a letter to Aid Access more than two years ago asking it to cease its activity, but the online drug provider has continued to send abortion pills to patients the U.S.

The legality of the practice is ambiguous, but groups such as Plan C, which aims to raise awareness about self-managed abortions, provide information about where and how the drugs can be obtained online.

Those groups say such access is especially important for women in places where abortion clinics face an ongoing assault by anti-abortion advocates and where lawmakers and governors are making it progressively harder for the clinics to remain open.

If/When/How, a reproductive rights legal aid group, has tracked 24 cases since 2000 when women were prosecuted for self managed abortions.

"It is possible that someone could be targeted for investigation or arrest or prosecution, even in the absence of a law that actually makes it illegal," said Sara Ainsworth, policy director for the group.

FILE - A group gathers to protest abortion restrictions at the State Capitol in Austin, Texas, Tuesday, May 21, 2019. Abortion rights advocates say the pandemic has demonstrated the value of medical care provided virtually, including the privacy and convenience of abortion taking place in a woman’s home, instead of a clinic.(AP Photo/Eric Gay, File)

FILE - Misoprostol drug, the most common abortion pill, sits on a gynecological table at Casa Fusa, a health center that advises women on reproductive issues and performs legal abortions in Buenos Aires, Argentina, Friday, Jan. 22, 2021. Misoprostol empties the uterus by causing cramping and bleeding. The drugs are approved for use by the FDA up to 10 weeks of gestation. (AP Photo/Victor R. Caivano, File)