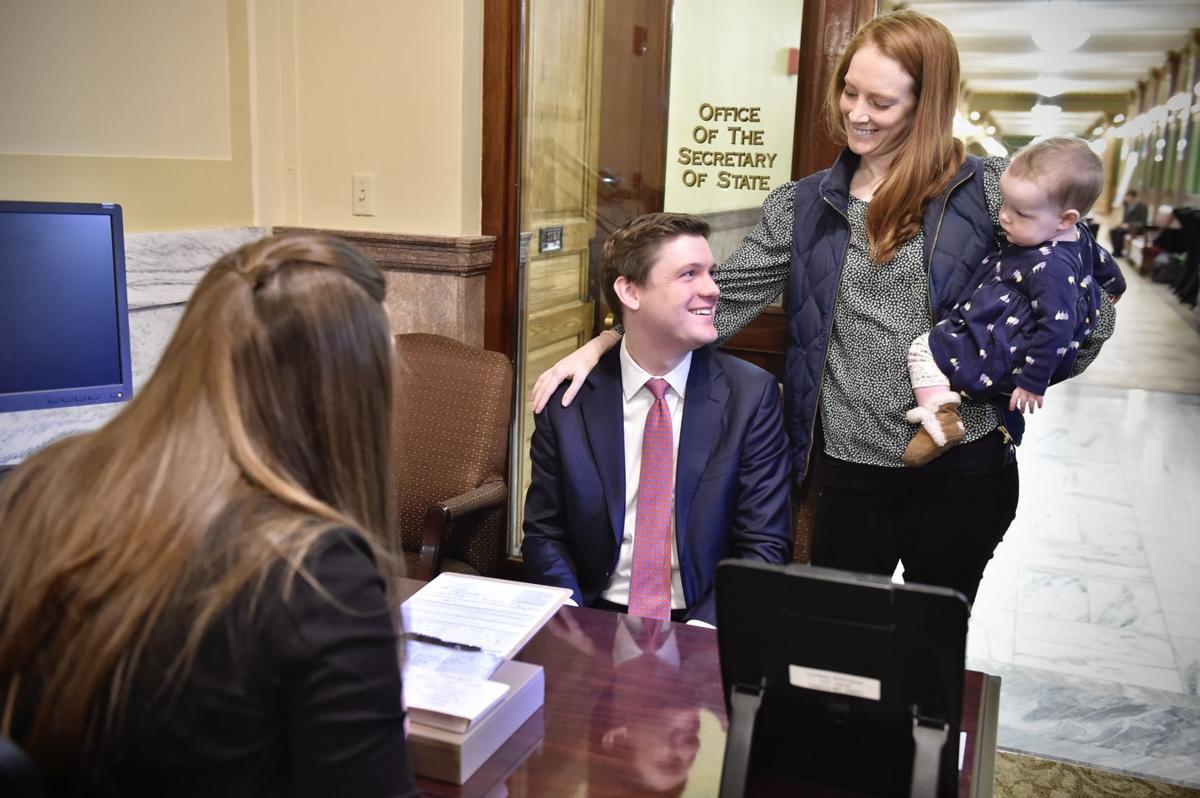 Raph Graybill, democratic candidate for attorney general, files for candidacy in January 2020 with the Montana Secretary of State’s office alongside his wife, Marisa Graybill, and 7-month-old daughter, Genevieve Graybill.

HELENA — A former Montana lawmaker and political science instructor is asking the state Commissioner of Political Practices for a ruling on whether Democratic attorney general candidate Raph Graybill meets the requirements to run for office.

The argument by David Wanzenried of Billings comes down to the interpretation of a requirement that a person running for attorney general must be admitted to practice law in Montana and to have engaged in active practice of law for at least five years before election.

Graybill's campaign said he clearly meets the requirements and notes that Wanzenried has endorsed and held a campaign fundraiser for his opponent, Kimberly Dudik of Missoula.

Commissioner Jeff Mangan said Wednesday he would take any additional written arguments through Friday and that making a decision is one of his office's highest priorities. The decision could be appealed directly to District Court, Mangan said.

Wanzenried said he'd like to see a decision by the time the candidate filing period ends on March 9, prior to the primary election on June 2 or no later than the general election on Nov. 3.

Wanzenried, a political science professor at Montana State University-Billings and a former legislator from Missoula, argues Graybill was admitted as an active member of the Montana Bar on Sept. 22, 2015, and will not have been active for five years prior to the June 2 primary. Graybill's campaign counters that the primary is a nomination for the actual election, which takes place on Nov. 3, by which time he will have met the length-of-practice qualification.

Wanzenried also argues that Graybill has worked as a federal law clerk and for a law firm in Washington state and therefore will not have been actively practicing law in Montana for five years before the election.

Graybill, the chief legal counsel for Montana Gov. Steve Bullock, cited a Montana Supreme Court ruling that said service as a judicial law clerk qualifies as active practice. Graybill remained licensed and a member of the Montana Bar while in active practice at a Seattle law firm, his campaign responded.

"Contrary to the complaint's analysis, there is no hidden additional test for how many of an attorney's cases are in Montana, or whether an attorney is a litigator at all," Graybill's campaign wrote in its response.

Another Bozeman resident running for U.S. Senate as a Democrat

Bozeman resident Josh Seckinger, who is a fly fishing guide, said Tuesday he's running as a Democrat in the U.S. Senate primary.

Investigators are concerned customers are overpaying for the 10-square-mile expansion of Rosebud Mine, and also not benefiting from a substantial tax credit.

Montana's PSC commissioners are spying on each other, investigation shows

Democrats running for governor are split on Bullock's legacy

Two of Steve Bullock's would-be successors are making the popular Montana governor a central issue in the race for the Democratic nomination — with starkly different takes on his job performance.

The Montana Lottery Commission has approved the types of bets that will be available when legal wagering on professional and collegiate sporting events begins.

Montana's PSC commissioners are spying on each other, investigation shows

The five candidates vying to be the Democratic nominee for Montana’s U.S. Senate seat squared off in Bozeman Friday night in a forum that saw some attempt to articulate why voters should pick one person over the other.

A lawsuit filed in Montana this month claims that a medical records company charged patients more than allowed by state law to access their own medical records.

Raph Graybill, democratic candidate for attorney general, files for candidacy in January 2020 with the Montana Secretary of State’s office alongside his wife, Marisa Graybill, and 7-month-old daughter, Genevieve Graybill.