Following an audit that found falsified financial records at the Montana Public Service Commission, a former PSC chairman is asking Gov. Greg Gianforte to do something no previous executive has done — remove a commissioner from office.

Former commissioner Greg Jergeson wrote Gianforte this week about a never-used law that allows Montana’s governor to remove PSC members who violate the law. Jergeson said the falsified documents found during a financial compliance audit of the PSC justifies determining whether the law should be used by the governor.

“This rises to a level that, I don’t care who the governor is, I need to alert him,“ said Jergeson, who was a Democratic PSC chairman who was appointed chairman by the commission's Republican majority. “He (Gianforte) campaigned as a businessman who knows how to make sure agencies are operating right. I am sure he doesn’t think this is the way a business ought to operate.”

The PSC is an elected, five-member, quasi-judicial regulator of monopoly utilities. The all-Republican commission sets the electricity rates for more than 400,000 utility customers in Montana. In cases where customers are captive, meaning they must rely on one business for services like electricity, garbage or water, the commission is supposed to balance customers' right to a reasonable price and reliable service with a utility's right to a rate of return. The job pays $109,000 a year.

Jergeson wrote Gianforte on Tuesday. He also contacted Montana Attorney General Austin Knudsen and suggested the state’s lead prosecutor review the audit for any criminal behavior that could be turned over to a county attorney for prosecution. The former PSC chairman, Jergeson, also served 24 years in the Montana Senate and was a member of the bipartisan Legislative Audit Committee, which will be hearing the audit during its next meeting June 7 and 8. 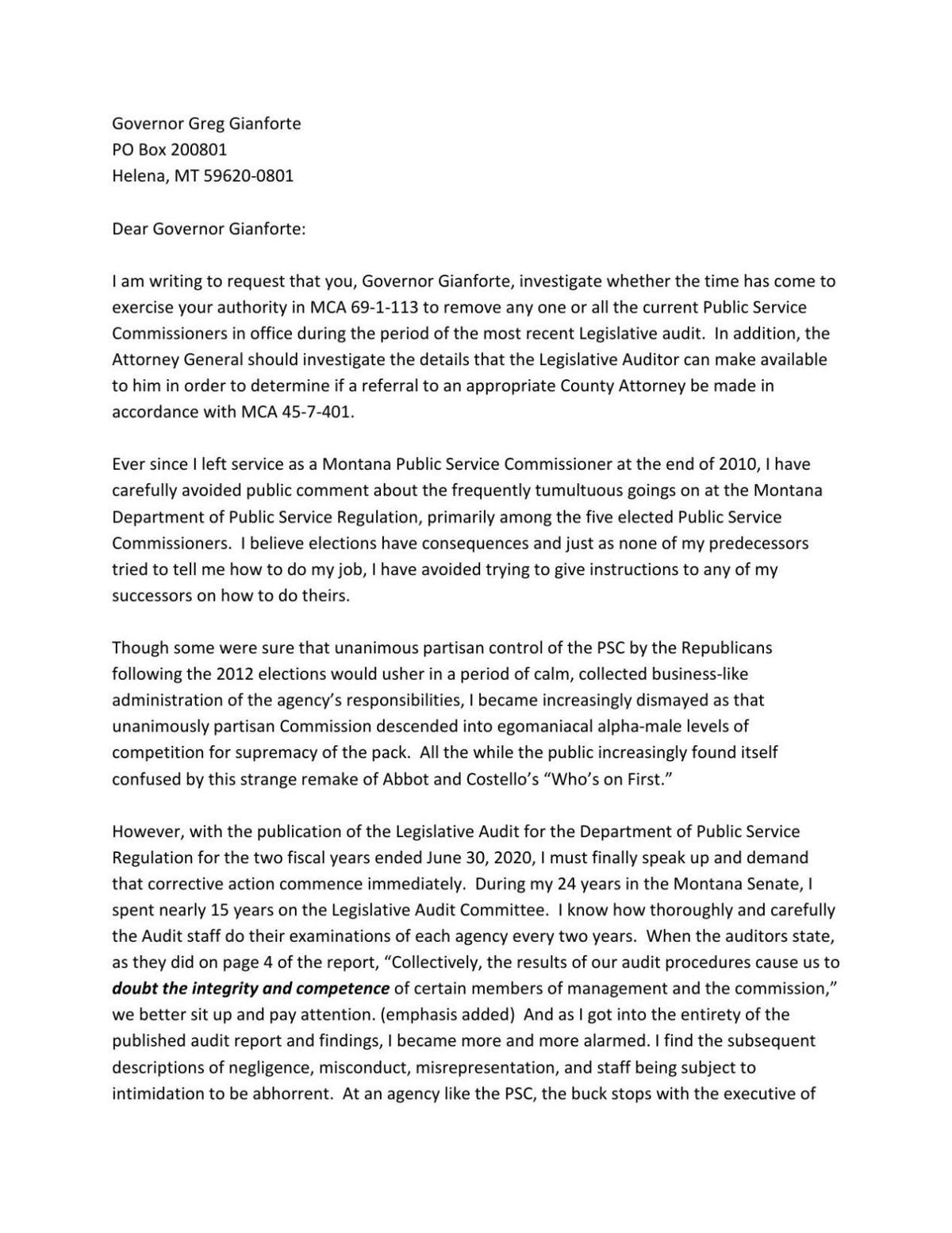 Spokesmen for Gianforte and Knudsen acknowledged receiving Jergeson’s letter. The governor’s staff said it couldn’t comment on the audit at this time.

Knudsen's staff is following the audit's review by the Legislative Audit Committee.

"We are aware of the audit and will take note of the Legislative Audit Committee’s proceedings," said Emilee Cantrell, Knudsen press secretary.

Legislative auditors cited falsified records and last spending practices at the Montana PSC. They said there wasn’t enough credible information available to assess the department’s finances. Auditors did conclude that the PSC’s books were off as much as $100,000 both because PSC debts went unpaid and revenue owed to the commission by businesses it regulated had gone uncollected. Auditors also concluded the commissioners’ travel expenses were out of control.

“We had concerns about the integrity and competence of certain management personnel, due to an attempt to provide us with falsified documentation, potential waste of state resources, and disregard of state and internal policies including management override controls,” auditors said in the report.

Commissioners contacted by Lee Montana Newspapers after the audit as published said they been advised not to talk about it before the Legislative Audit Committee meeting.

Wednesday, the Commission held a closed meeting to, as described in its weekly agenda, “discuss the audit committee hearing.” That’s not a valid reason to denying the public access of the government proceeding and violates the public meeting laws secured by the Montana Constitution.

Lee Montana Newspapers filed an objection to the closed-door meeting Wednesday and again on Thursday after the PSC went 24 hours without responding.

Late Thursday, PSC staff attorney Lucas Hamilton, replied the closed-door meeting was about a personnel matter related to the audit. Hamilton also said the commission kept no record of the meeting. He said the minutes from the closed-door session couldn’t be released without a court order.