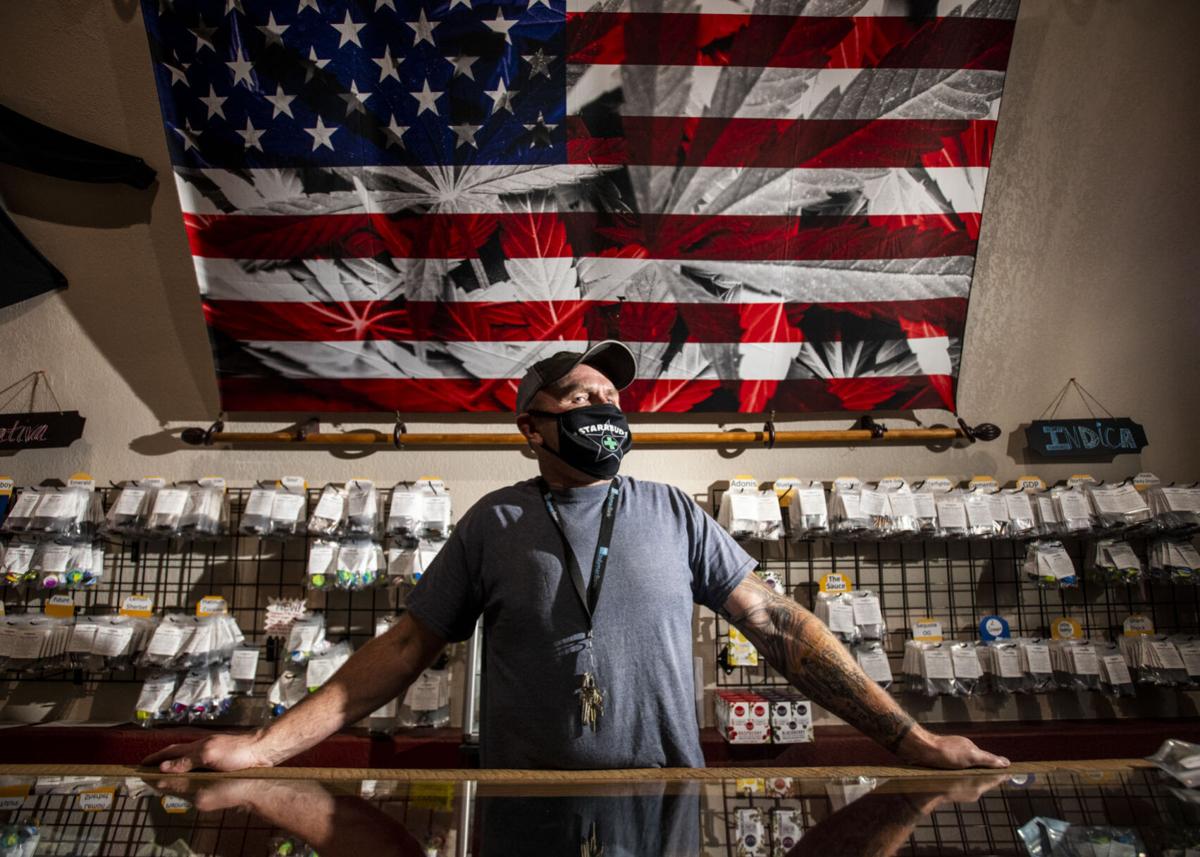 Glenn Broughton, owner of Starrbuds, stands for a portrait at the shop on Wednesday. 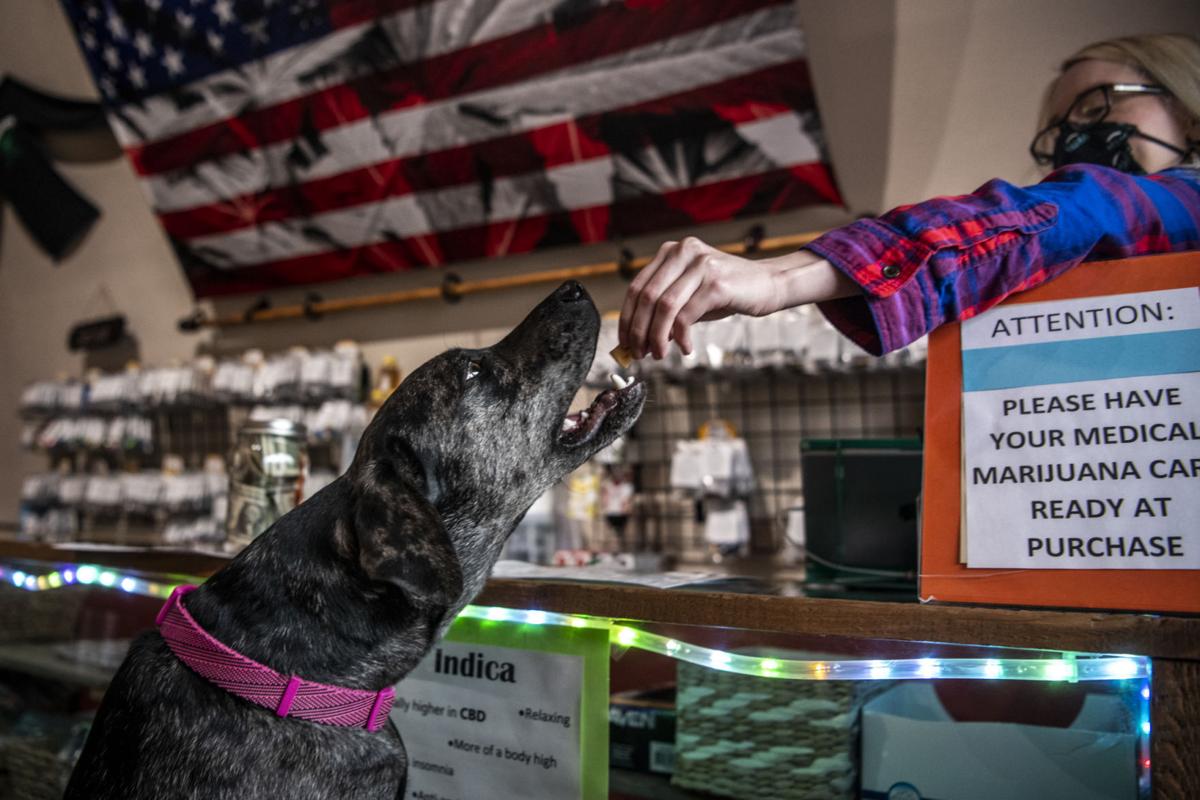 Winnie Zarling, a budtender at Starrbuds, offers Maggie a treat while her owner checks out merchandise.

Two weeks before Montana voters passed Initiative 190, legalizing cannabis for recreational use, Rep. Derek Skees, a Flathead Republican and majority whip last session, had filed a placeholder for potential legislation to kill the proposal if it passed.

"I have a lot of constituents that are very concerned with this," he said Wednesday. "This bill really should have come through the Legislature so that we can get the pros and cons."

Skees thought, if recreational passed by a slim margin, say 51%, he would take up the repeal question with lawmakers when the legislative session arrives in January. Instead, Montana voters put legalization over the line by 14 points. Even in Flathead County, Skees' home district, recreational marijuana passed with 54% of the vote.

With the same electorate that just handed the entirety of state government to Republicans, Skees said he'll now abide by the voters' decision.

"There's no way I'm going to try to overturn the will of Montana," Skees said.

Skees doesn't necessarily believe in recreational cannabis use himself — he thinks Washington and Colorado have learned hard lessons about pot in since legalization took hold there — but a Republican-led Legislature and Governor's Office will now be tasked with implementing the new industry into the state Department of Revenue in a fashion loosely akin to alcohol regulation.

Petersen said recreational marijuana won't likely hit retail shelves until roughly February 2022, but certain aspects of I-190's passage will begin even before the Legislature gets underway. Beginning January 1, 2021, anyone convicted of marijuana possession that would not have been illegal had I-190 already passed can get the charge wiped from their record.

"The most pressing thing is that folks are going to be able to have their prior records expunged for things that would be legal under the law," Petersen said.

Of course, projected tax revenues could take center stage as lawmakers set out to install the industry within the Department of Revenue. By then, New Approach Montana will likely be defending in court a legal challenge from marijuana opponents in District Court who argue I-190 should not have appropriated those projected revenue funds. Petersen declined to comment on the lawsuit on Wednesday.

The ballot measure does, however, task the Legislature with implementing the system in the Department of Revenue so marijuana business licenses can be administered by October 2021. Petersen believes, for the most part, the legislation is ready for a quick sailing through the capitol.

Glenn Broughton, owner of Starrbuds dispensary in Missoula, plans to be there to make sure the medical marijuana industry has its say in how recreational marijuana plays out. Broughton isn't the only medical provider in Montana to express concerns over I-190's framework, particularly for fear of Big Weed coming into the state and squeezing out local providers. I-190 includes a 1-year moratorium on new marijuana business licenses doled out by the state so that current providers can have the first chance at staking out retail cannabis.

"That's a smoke screen," Broughton said of the moratorium.

Broughton points out there's nothing to stop a large-scale cannabis business from touching down in Montana the day after I-190 passed, obtaining a medical marijuana license and then scooping up properties. The Montana Department of Public Health and Human Services was not able to tell the Missoulian on Wednesday if the agency had received any requests for new marijuana provider licenses. But New Approach Montana's campaign was propelled by out-of-state political committees which haven't disclosed their donors, so Broughton is more than curious, he's skeptical.

"I was approached two years ago by an outfit out of Boston wanting to buy me," Broughton said. "So I asked, 'why'd you pick me?' He said, 'I just happened to be stuck at the (stop) light and looked over and seen you and we pulled into the parking lot.'

"Anyone who owns their own hard real estate, they want to buy them, and then they're going to set up shop," Broughton added. "They can lower the prices to $50 an ounce. They do that for six months and everybody else is done."

Further, he said he wants the Legislature to limit cannabis companies' ability to wholesale half of their product to other providers, which would put more of the same product on the market and eliminate product choices for customers, or spill surplus product back into the black market. In the current market, providers are able to stand out by focusing on edibles, concentrates or just marijuana. If providers want to grow through the medical marijuana's existing "canopy" system, which grows by size in tiers, they should only be able to wholesale 20% of their product, Broughton said, to keep companies from dominating other providers.

"These's a lot of things that are important, but if we can get a few key things in there, that's not going to allow these out-of-staters to come in and just put up huge amounts (of product), I think everybody will be fine, but if they allow that, we're all in a tight spot," Broughton said.

Montana Supreme Court justices shared no opinion on the merits, but said attorneys failed to illustrate urgency necessary for the Supreme Court to take the first look rather than the District Courts.

The question of weed legalization grew more dynamic this week, as proponents gained the support of public lands groups and opponents filed a complaint over a "dark money" group.

Missoulians better get their fall lawn chores done by Saturday to avoid losing the leaves under a new load of snow.

A man who was 70 years old or older has died, marking the 25th COVID-19 related death suffered in Missoula County since the beginning of the pandemic, the Missoula City-County Health Department said Thursday.

Glenn Broughton, owner of Starrbuds, stands for a portrait at the shop on Wednesday. 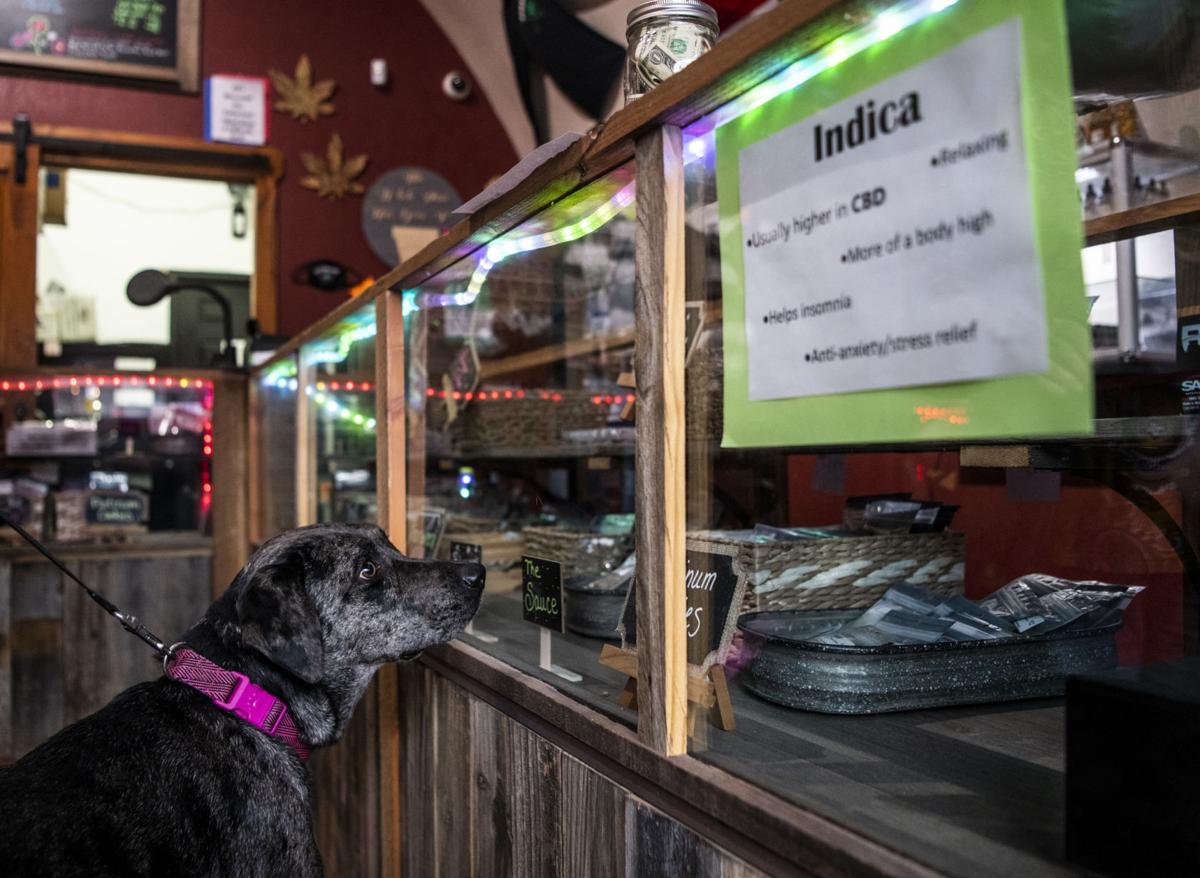 Maggie, a 14-month-old Catahoula Leopard Hound, eyes the merchandise at Starrbuds on Wednesday.

Winnie Zarling, a budtender at Starrbuds, offers Maggie a treat while her owner checks out merchandise.