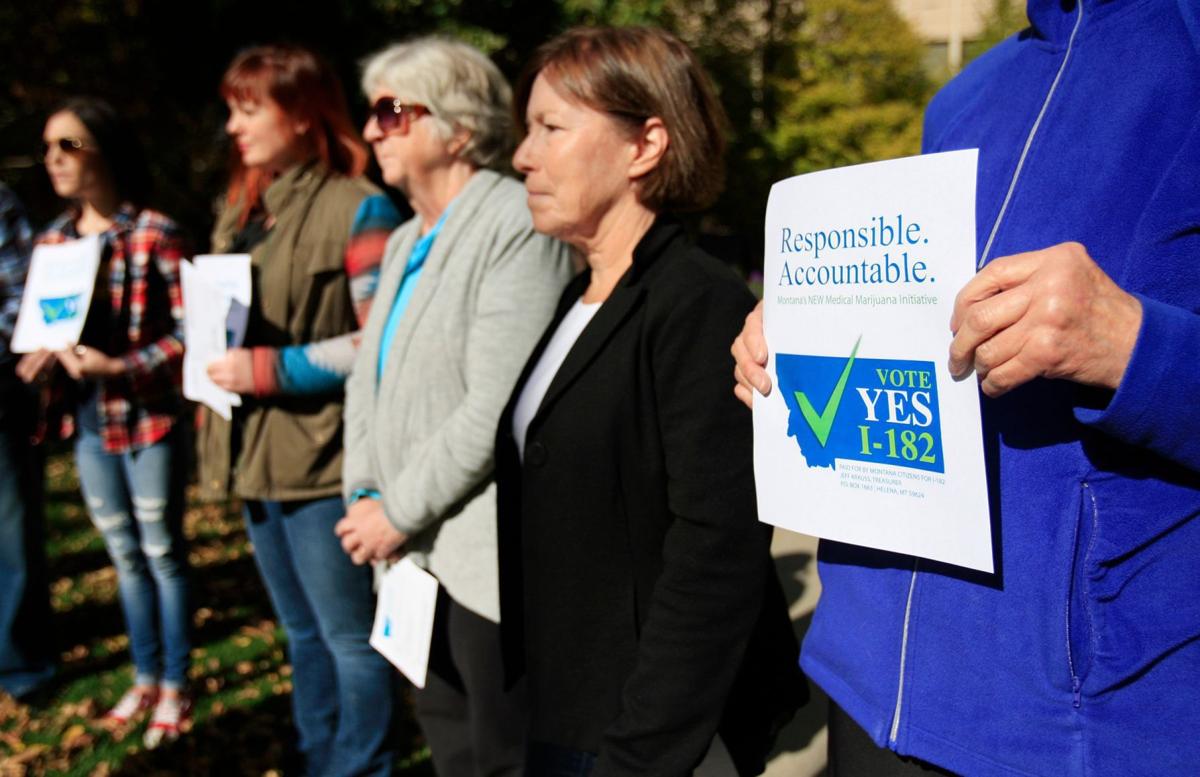 A rally participant holds a sign during a rally in support of I-182 for medical marijuana at the Yellowstone County Courthouse on Thursday. 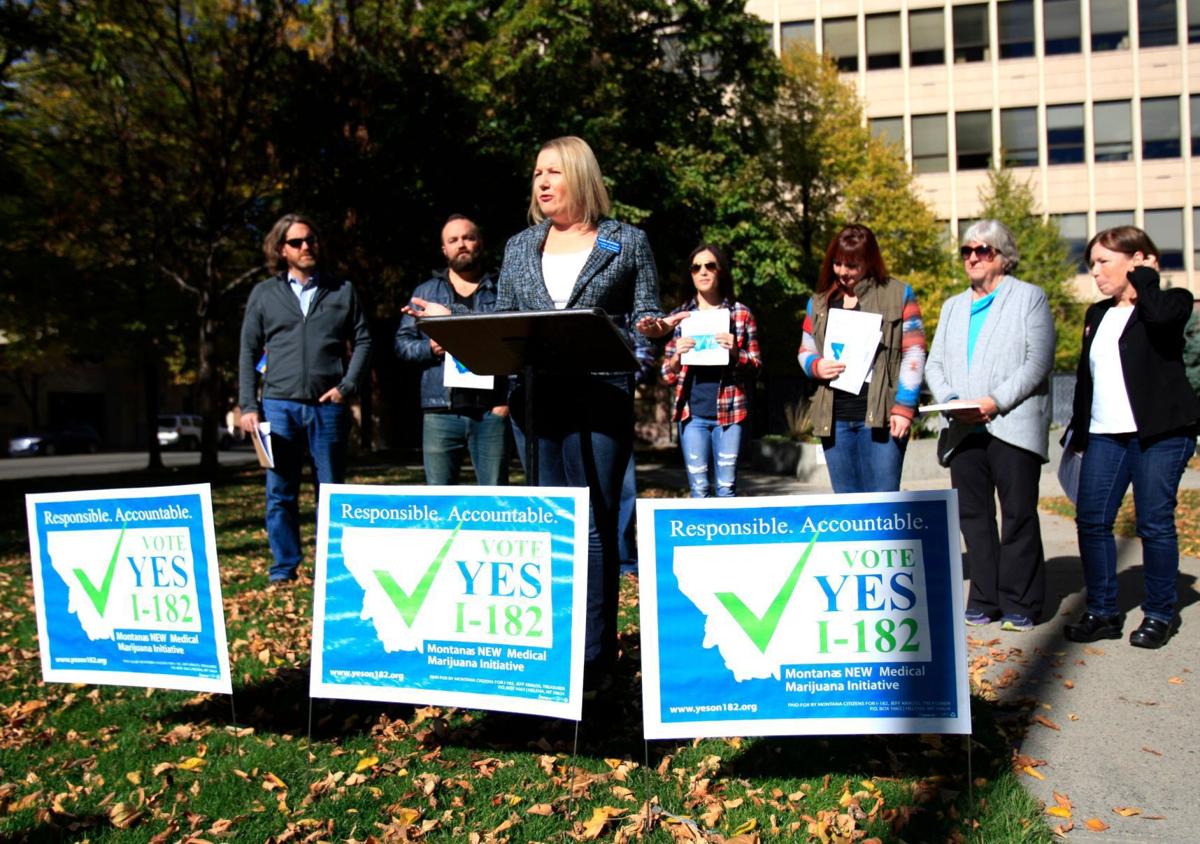 Montana legislative candidate Kari Boiter speaks during a rally in support of I-182 for medical marijuana at the Yellowstone County Courthouse on Thursday. 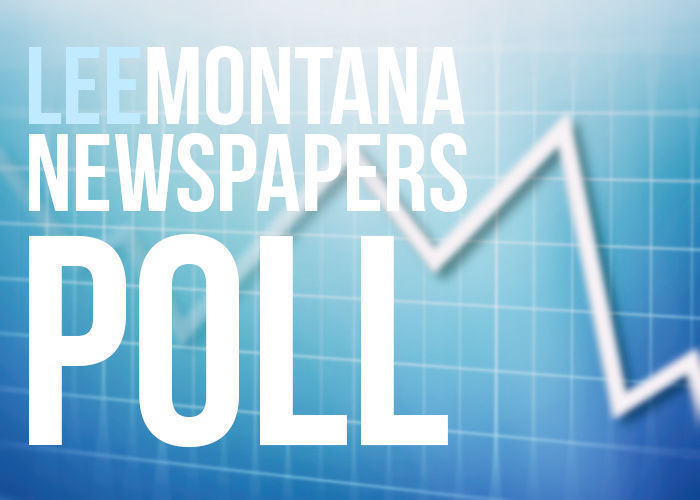 BILLINGS – The majority of Montana voters oppose the medical marijuana expansion proposed in I-182, according to a recent poll commissioned by Lee Newspapers.

The findings suggest that Montana is bucking the national trend of acceptance of the drug, and the campaign for the initiative says that its own data paints a different picture.

Ballot Initiative I-182 would allow for wide use of medical marijuana. If you were voting today, would you vote 'Yes' to approve the initiative, or 'No' to reject the initiative?

A Lee Newspapers poll of more than 1,000 registered voters, conducted Oct. 10-12, found that 51 percent of people responding said they they would vote no on the ballot initiative. It would restore access to medical marijuana for thousands of Montanans while putting in place licensing, product testing and other restrictions.

Of those polled, 44 percent favored the measure, leaving 5 percent undecided. The poll had a margin of error of plus or minus 3.2 percentage points.

The majority of Democrats and Independents favored the initiative, the poll showed. But it wasn't enough to overcome Republicans, who came out 72 percent against I-182.

Ballot Initiative I-182 by party identification

Craig Wilson, a political science professor at Montana State University Billings, suggested that in a battle over public perception, medical marijuana might have been hurt by its tumultuous history.

"I think that a real initiative on medical marijuana would have a chance in Montana," he said. "But this one is tainted by the past and also the extent to which (Steve) Zabawa and his folks have weighed in against it.”

Zabawa is the founder of Safe Montana, an anti-drug group.

More than 60 percent of voters approved medical marijuana in 2004, but it has since undergone drastic changes.

As the number of medical marijuana cardholders exploded around 2011, concerns arose about abuses of the system by recreational users. The Montana Legislature passed a law reducing the scope of the program, and that law stands today.

The I-182 campaign views the current law as too strict. A three-patient limit for providers has left many registered card holders without medical marijuana.

Opponents of the initiative worry that any expansion of medical marijuana will lead to increased use.

“There is no doubt in my mind that the people that started medical marijuana did it as a first step to legalization of recreational marijuana,” said Jeffrey Kushner, statewide drug court administrator.

Montana Citizens for I-182 has run a high-dollar campaign, and the committee has received nearly $230,000 from the Montana Cannabis Industry Association to amend the state program.

But the campaign's opponent, Safe Montana, has run a visible operation as well. Zabawa,  who owns the Rimrock Auto Group car dealerships in Billings, has put part of his $125,000 investment into billboards and a video ad.

Much of that money was spent on Safe Montana's ballot initiative, I-176, which would have repealed the state medical marijuana program but failed to reach the ballot.

The Lee poll echoes work done by MSUB political science students under Wilson, who co-directs an annual poll. In 2004, the majority of Montanans supported medical marijuana, according to MSUB's results. The medical program passed a statewide vote that year.

In recent years, the MSUB poll has shown that medical or recreational marijuana fell out of favor with the majority of voters.

“You're getting into a question that deals with social acceptability,” Wilson said.

The trend seems to be reversing nationally. On Monday, a Gallup poll found that 60 percent of Americans support the legalization of marijuana.

Those in the I-182 campaign say that the majority of voters remain on their side. The campaign's own poll, conducted by Colorado-based Harstad Strategic Research, had 59 percent in favor of the measure, with 32 percent against and 9 percent undecided.

Paul Harstad of Harstad Strategic Research chalked the difference in poll results up to the questions asked.

“The wording in the Mason-Dixon poll is biased and dramatically oversimplified, and there’s no resemblance to the ballot summary that will be available to all voters,” Harstad said.

Mason-Dixon Polling and Research conducted the Lee Newspapers poll with a brief question: "Ballot initiative I-182 would allow for wide use of medical marijuana. If you were voting today, would you vote ... ."

Pollsters asked about statewide and national races, as well as other ballot initiatives in the same phone call.

Harstad's poll asked a 121-word question to voters, which detailed the removal of measures from the current law. The question also went over I-182's provisions for licensing, annual inspections and the addition of post-traumatic stress disorder to the list of qualifying illnesses.

Campaigns for and against the initiative will ramp up efforts in the final weeks before Election Day. The I-182 campaign is hosting a series of Get Out the Vote appearances across the state.

Zabawa said Thursday that he plans to roll out television ads.

The Mason-Dixon statewide poll included calls to landlines and cell phones Oct. 10 through 12.

The results included 1,003 Montanans who reported they were both registered and likely to vote. The number of people polled in each county is proportionate to the historical voter turnout.

The margin of error for statewide figures is plus or minus 3.2 percentage points but higher for numbers broken down by gender, region or party.

A veteran's reflections on Afghanistan

Watch Now: The mystery of the mask

Watch Now: The mystery of the mask

This file includes full text of I-182, as we as arguments for and against the initiative. (Montana Secretary of State)

A ballot initiative that would ban the trapping of animals on public lands in Montana appears headed for failure, according to a recent poll c…

BUTTE – On Harrison Avenue, a billboard blares the slogan "NO POT SHOPS." On either side of the sign – a campaign ad opposing a citizen ballot…

A rally participant holds a sign during a rally in support of I-182 for medical marijuana at the Yellowstone County Courthouse on Thursday.

Montana legislative candidate Kari Boiter speaks during a rally in support of I-182 for medical marijuana at the Yellowstone County Courthouse on Thursday.