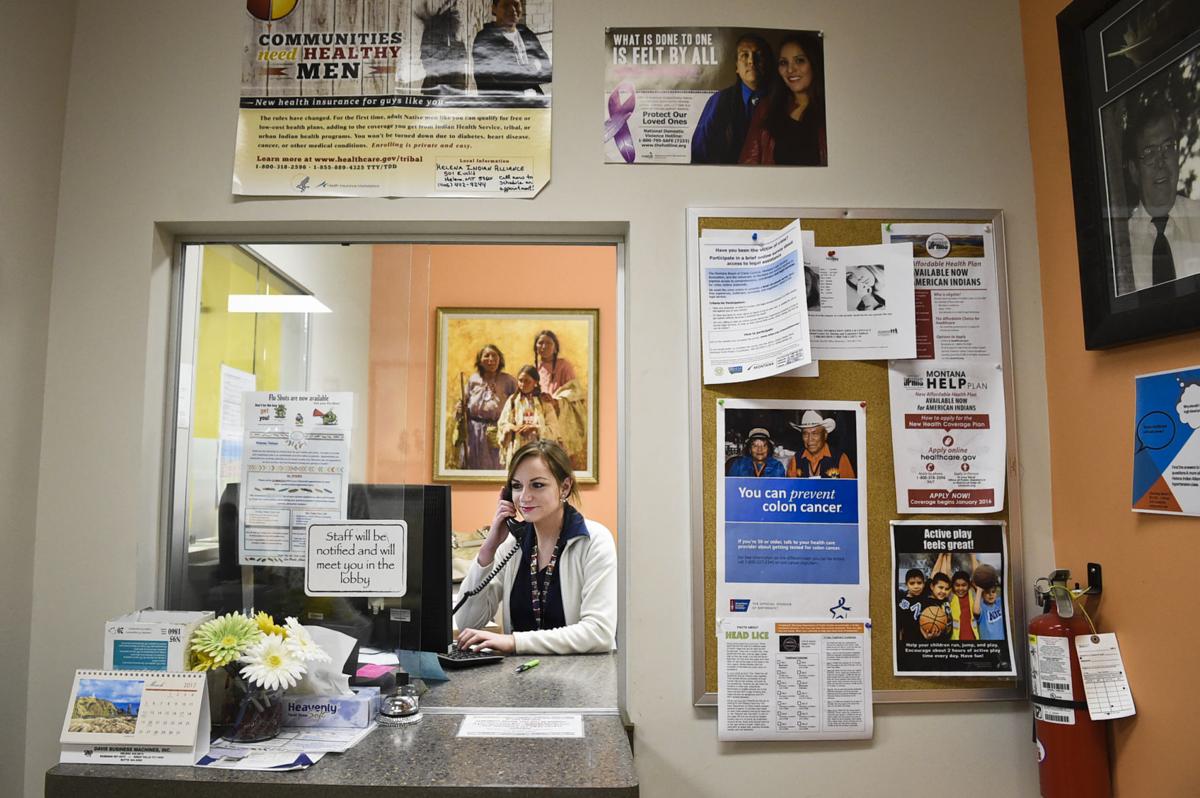 Katherine Finch fields a call from a patient in 2014 at the Leo Pocha Memorial Clinic in Helena. The clinic has been able to add nine employees and expand its offerings because of Medicaid expansion in Montana. 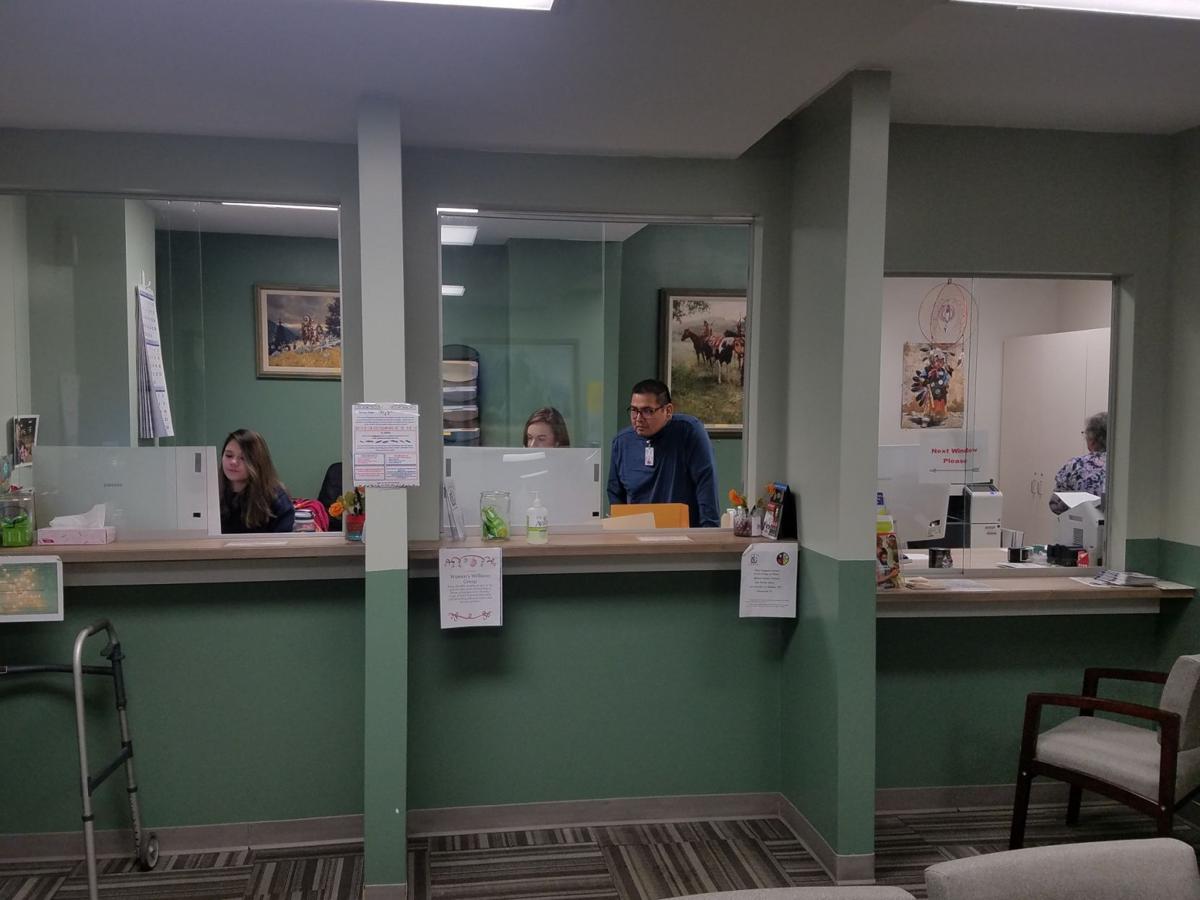 From left, clinic receptionists Rachel Pichardo and Kathryn Finch, as well as clinical applications coordinator and business office manager Kevin Sandoval work at the Leo Pocha Clinic. Because of money brought in from Medicaid expansion, the clinic was able to renovate the reception area and hire Pichardo.

Todd Wilson has seen first-hand the positive feedback loop that comes from having more people who seek care at Leo Pocha Memorial Clinic walk in the door with health insurance.

In 2015, before Medicaid expansion in Montana started, about 80 percent of those who sought care through the Helena Indian Alliance facility did not have health insurance coverage.

Montana has historically had one of the highest rates of uninsured American Indians, reaching nearly 43 percent in 2009 before the passage of the Affordable Care Act.

But once the landmark health care law opened the pathway for states to expand Medicaid, which Montana did in 2016, Wilson saw a dramatic change. The percentage of uninsured people to insured almost flipped; now only 15-20 percent of patients at the Alliance don’t have coverage.

Most of that is attributable to Medicaid expansion, Wilson said. Out of the Alliance’s total Medicaid population, 91 percent are covered by the expansion program.

Treating more people who have health insurance has meant the clinic and other programs the Alliance runs, like mental health services and a substance use disorder treatment program, are able to get paid more for what they provide. And the money coming back is invested into providing more services.

“We saw a really big impact from it financially,” Wilson said of Medicaid expansion. “We were able to get all those individuals that fell within that 18-64 (age) demographic enrolled into the program so we’re able to bill for their services.”

If someone comes to the Alliance without health insurance, they pay for services on a sliding scale based on income. But when there’s insurance in place, the Alliance has somewhere to get reimbursed for the care it provides.

The dollar figures associated with that change show how much of a financial boost Medicaid expansion has been to the Alliance. In the 2015 fiscal year, it billed about $150,000 to third parties for services it provided. Now it’s about $850,000 a year.

“With that money, we’re able to increase our services and personnel,” Wilson said. “It’s really grown.”

The Alliance brought on nine new staff, adding positions ranging from administrative support to clinicians and counselors, Wilson said. It expanded into new areas of the clinic building that were previously shuttered.

The clinic is federally qualified, meaning anyone can get care there. Its substance use disorder program greatly helped expand the options for those services in Helena, Wilson said, and expansion has made it easier to get that treatment.

“Being able to hire more staff, we were able to eliminate that wait list (for substance use disorder treatment),” Wilson said.

When the Montana Legislature first passed Medicaid expansion in 2015, it extended Medicaid coverage for people ages 18-64 who earn up to 138 percent of the federal poverty level, or $15,418 a year for an individual or $26,347 for a family of three. The program is set to expire this summer unless legislators extend it.

While American Indians make up about 8 percent of Montana’s population, they account for about 16 percent of people covered under Medicaid expansion. By the start of this year, about 15,550 American Indians were enrolled in the program, according to the state Department of Public Health and Human Services.

IHS, which is not health insurance and does not have an established package of benefits, says it only gets funding from Congress to cover about 60 percent of the health needs for people it covers. While Medicaid and Medicare are entitlement programs, IHS must be funded each year through congressional appropriation.

The federal agency operates hospitals and clinics on reservations in Montana and contracts with tribes in some locations to run facilities. It also provides a small amount of funding to urban clinics like Wilson's, though that makes up less than 1 percent of the agency's budget.

American Indians who have private insurance or Medicaid coverage can get care anywhere that accepts their insurance. Those with or without insurance can get care at IHS locations or through agreements IHS makes with other facilities when it lacks the capacity. But funding for that care is minimal.

A report from the Government Accountability Office found IHS spending per person is far less than other government programs. In 2017, IHS spent about $4,078 on each patient, while Medicaid spent $8,109, the VA spent $10,692 and Medicare spent $13,185

That spending gap is tied to a disparity in health outcomes for American Indians, who are expected to live about 18 years less than non-American Indians in Montana, said Aaron Wernham, the chief executive officer of the Montana Healthcare Foundation.

“The point of comparison is there is less than half the per capita spending of any other health care system,” Wernham said. “You can try to be proactive, but unless you had an alternative form of insurance in many parts of the state that was not going to happen and you weren't getting necessary (health care),” Wernham said.

For at least the last decade, IHS facilities in Montana operated at Level 1 status, Wernham said. The colloquial term for that is “life and limb,” a stark way of saying that unless someone was at risk of dying or losing a part of their body they wouldn’t get treatment. Preventive care was not an option.

“For service units that were at Level 1, they couldn’t pay for things like routine screenings and mammograms, any specialist consultation,” Wernham said. “There are a lot of services we take for granted that those service units aren’t providing.”

But in the spring of 2018, IHS told the state health department that because of an increase in revenue from treating people covered under Medicaid expansion, all its facilities in Montana had moved to operating at a Level 4. That means people can get referrals for things like preventive care, highly specialized medical procedures, restorative orthopedic surgeries and rehabilitation care not offered at IHS facilities.

On the Blackfeet Reservation, for example, tribal- and IHS-run facilities have seen an additional $13.6 million dollars for services reimbursed by the federal government, according to figures from the state health department. A report from the Montana Budget and Policy Center, based on information from the state health department, found that Medicaid expansion has paid for about $47 million in IHS services since the program started.

Across the state, the number of referrals on the Blackfeet, Crow, Fort Belknap, Fort Peck and Northern Cheyenne communities has doubled since 2015, to 33,152, because clinics and hospitals have more money to pay for those services.

In the Blackfeet community, for example, about 80 percent of the 2,042 people who got coverage under Medicaid expansion have been able to access preventive care. That care has helped avert things like 13 possible cases of colon cancer.

“This is really important for access to care and allows people to get all of those necessary screenings and identify all of those problems,” said Tressie White, a program director at the foundation.

While there's agreement from Democrats and Republicans in the state Legislature to continue Medicaid expansion, which covers more than 95,000 people statewide, there's division over how.

Democrats want the program to continue in its current form, with an additional fee on hospitals to help pay for the state's share. An early draft of a Republican proposal, which the bill sponsor said has been updated to include that hospital fee and also adds a work requirement program, though he hasn't elaborated the specifics. Some estimates show about 3,000 American Indians could lose coverage under work requirements because there are so few jobs available on reservations. But Wernham calls that a "conservative" estimate.

Rep. Ed Buttrey is the Great Falls Republican who is carrying the expansion proposal that contains the work requirements. He calls them "community benefits" and has said he does not want to see large numbers of people lose coverage, but acknowledges some could under his plan.

White, with the Montana Healthcare Foundation, says a decrease in the number of American Indians covered would have a devastating effect on health care access for Montana Natives both on and off reservations. Besides the loss of federal money coming in, American Indians with coverage under Medicaid expansion could access care anywhere that accepts Medicaid.

“They would really be scaling back all of the services they’re providing,” White said.

Elephant breaks into kitchen wall looking for snacks in Thailand

Elephant breaks into kitchen wall looking for snacks in Thailand

8 children in van killed in crash in Alabama

8 children in van killed in crash in Alabama

The Biden administration's suspension of new oil and gas leases on federal land and water was blocked Tuesday by a federal judge in Louisiana.

The governor made the $18,732 donation during a tour of One Health Bighorn, a health center offering substance abuse disorder treatment in southeast Montana.

State settles with prison whistleblower for $250,000

The corrections officer said his promotions were stifled after he raised the alarm about rape allegations at the Montana Women's Prison.

Senators would stop 'micropolitan' label for 144 US cities

Some lawmakers are trying to stop 144 U.S. cities, including Missoula and Great Falls, from losing their designations as "metropolitan areas" as the federal government updates its standards.

Both Republican and Democratic senators pressed Interior Secretary Deb Haaland for answers Wednesday after a federal court blocked the Biden administration's suspension of new oil and gas leases on federal lands and waters.

Katherine Finch fields a call from a patient in 2014 at the Leo Pocha Memorial Clinic in Helena. The clinic has been able to add nine employees and expand its offerings because of Medicaid expansion in Montana.

From left, clinic receptionists Rachel Pichardo and Kathryn Finch, as well as clinical applications coordinator and business office manager Kevin Sandoval work at the Leo Pocha Clinic. Because of money brought in from Medicaid expansion, the clinic was able to renovate the reception area and hire Pichardo.