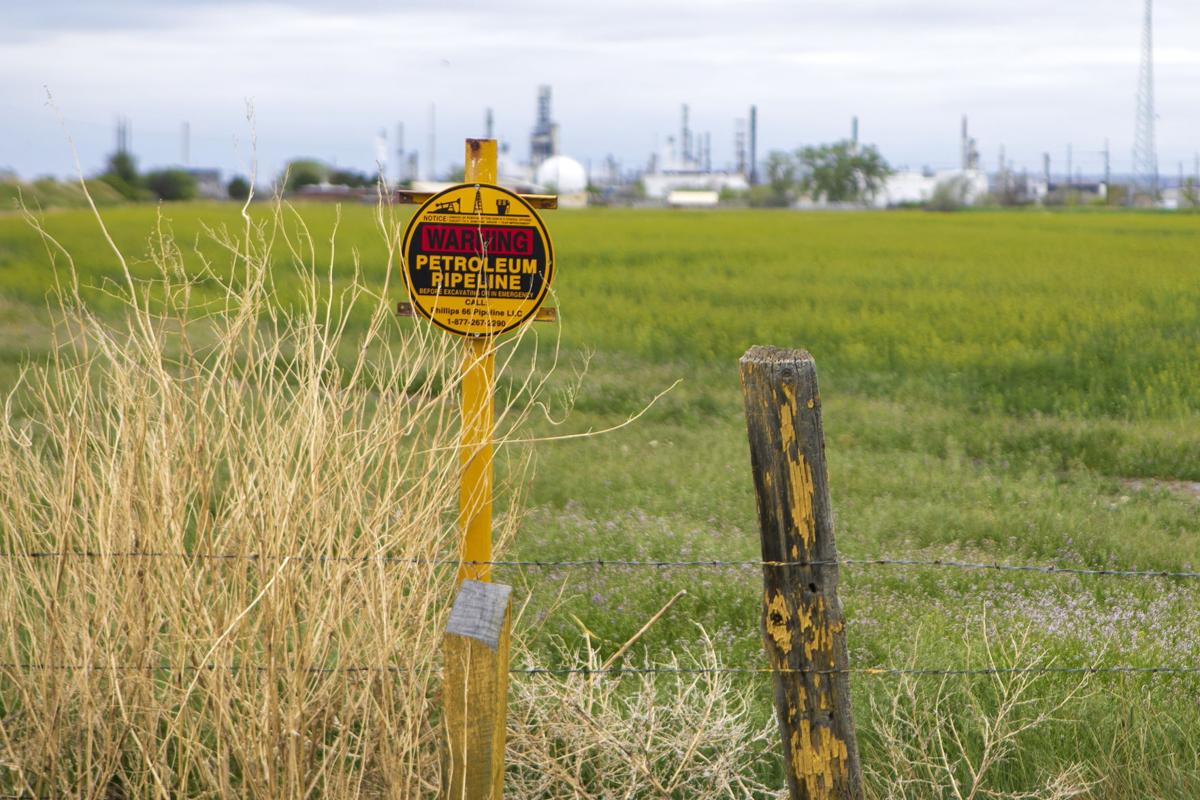 The CHS Refinery in Laurel is seen in the distance beyond a plot of land purchased by Northwestern Energy to become the future site of a new power plant. 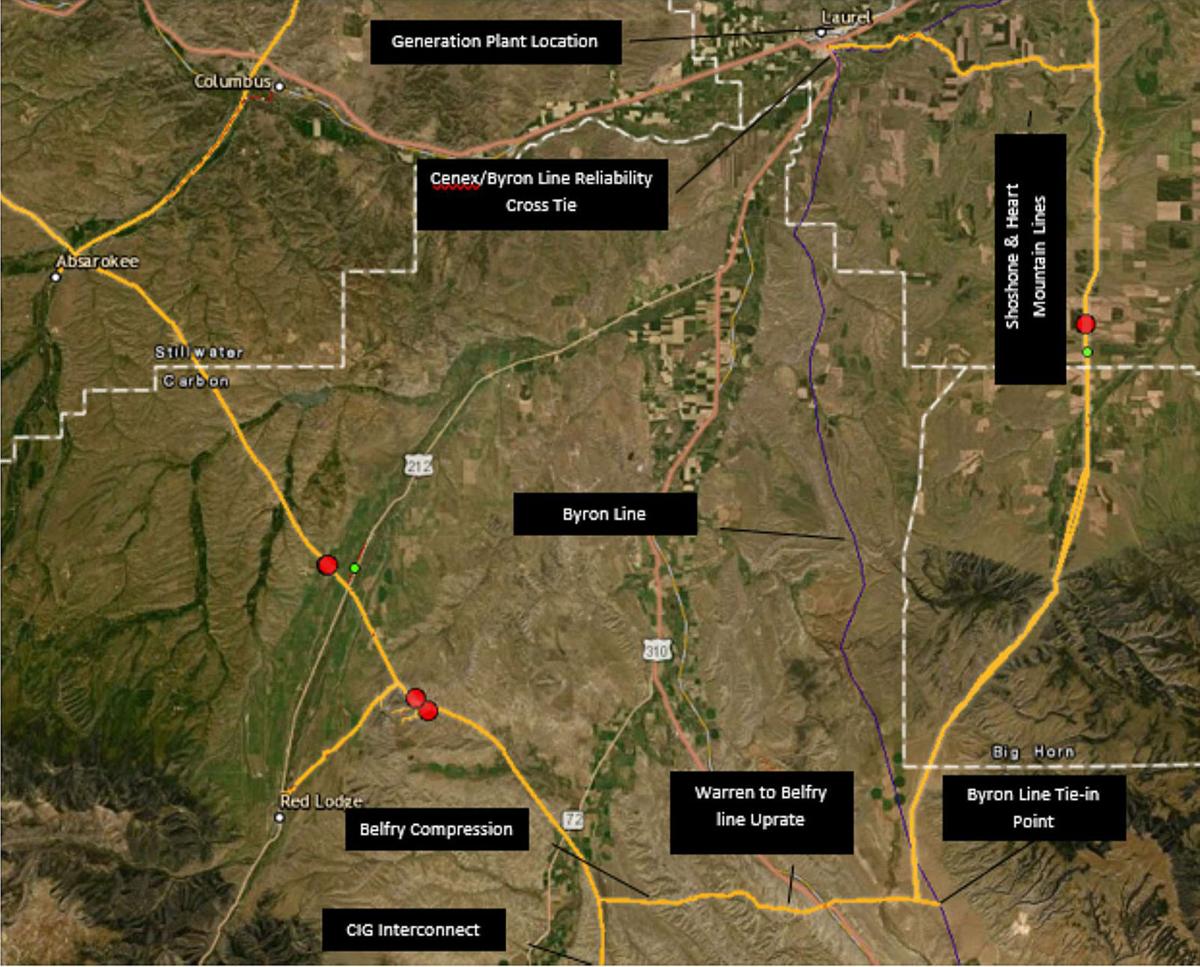 Once a crude oil pipeline for Phillips 66, the Bryon Pipeline has been sold to NorthWestern Energy and is being converted to carry natural gas to a proposed gas-fired power plant in Laurel. The pipeline will connect the power plant to gas fields in Wyoming, Colorado, Oklahoma and Kansas.

NorthWestern Energy has been ordered to stop construction of a natural gas pipeline under the Yellowstone River, following a county decision to withdraw a permit for the project.

Neighbors to the proposed pipeline won a court order Wednesday stopping the project because Yellowstone County permitted NorthWestern to drill in the floodplain without the county first informing the public or giving neighbors a chance to respond.

The pipeline is to serve a 175-megawatt gas-fired power plant that NorthWestern sited on the north side of the Yellowstone River near Laurel. The 18-stack power plant would be the utility's largest newly-constructed generation project in Montana by capacity. Prior to the order, boring equipment had been staged in the floodplain and trenching leading to the site was underway. Neighbors have raised concerns about the location of the power plant, as well.

Landowners adjacent to the project say they’re concerned about damage to their land and the floodplain.

“They owe the people who are adjacent to this project an apology, in writing,” neighbor Aaron Felder said of the county.

Yellowstone County insists that it’s done nothing wrong, but would follow the court order of District Judge Michael Moses, withdraw the permit, order NorthWestern to stop, and restart the permitting process, complete with public notice and participation.

“The Board of County Commissioners will be asked on Tuesday, Jan. 18, to set a Public Hearing regarding whether to issue a new floodplain permit to the applicant for Tuesday, Feb. 1,” Jeana Lervick, attorney for Yellowstone County, told the court. “At and prior to the public hearing, if approved, all members of the public, including petitioners, will have the opportunity to submit comments and concerns regarding the permit application.”

The county asked that the neighbors’ case be dismissed because the county was starting over.

"NorthWestern Energy’s installation design for the Byron Pipeline ensures the safety of the public and the environment, including the Yellowstone River, during construction and its use to deliver natural gas for our Montana customers.

"Although delaying work is costly, NorthWestern Energy has followed the permitting process and will continue to do so to secure approval, again."

The withdrawn floodplain permit isn’t the first obstacle the power plant has faced. NorthWestern had initially sought an easement to bore a natural gas pipeline beneath Riverside Park, which offers the community its best public access to the Yellowstone River.

After the easement effort stalled, the utility rerouted the pipeline downstream from the city park where approval of the Laurel City Council wasn’t needed. The Laurel City Council had delayed votes critical to the plant’s development and briefly formed a fact-finding mission to square NorthWestern’s claims about the project with neighborhood concerns about noise and pollution.

Last October, the state Department of Environmental Quality was sued for allegedly ignoring the state’s Constitution when issuing an air permit for the power plant.

In a lawsuit filed Oct. 21, the Montana Environmental Information Center and Sierra Club said DEQ ignored the power plant’s contribution to local air and water pollution. The area where the power plant would be located has already been dinged by the EPA for excessive sulfur dioxide levels, mainly emanating from a CHS oil refinery near the gas-fired power plant site. Carbon dioxide from the gas-fired plant, some 769,706 tons a year, is a climate change contributor.

NorthWestern hasn’t responded to questions about the status of the power plant for a few weeks, but told existing and potential investors in one-on-one meetings Dec. 8 that construction of the $275 million power plant is expected to begin this year, with the power plant operating by the winter of 2023-2024. The utility does disclose the air permit lawsuit against DEQ as an issue.

In September, NorthWestern withdrew its request to get the power plant preapproved by the Montana Public Service Commission for long-term customer billing. The utility informed the Montana Public Service Commission then that construction and supply chain challenges related to the COVID-19 pandemic forced the withdrawal because the project needed to start as soon as possible.

The preapproval process, which takes up to 270 days, is likely to continue until April.

Since candidate filing ends March 14, the judges set a fast timeline to decide how to handle Public Service Commission districts with unequal populations.

“While Montana’s desire to promote discourse in response to negative campaign advertisements is laudable, the First Amendment cannot be so easily overcome,” the judge wrote.

The CHS Refinery in Laurel is seen in the distance beyond a plot of land purchased by Northwestern Energy to become the future site of a new power plant.

Once a crude oil pipeline for Phillips 66, the Bryon Pipeline has been sold to NorthWestern Energy and is being converted to carry natural gas to a proposed gas-fired power plant in Laurel. The pipeline will connect the power plant to gas fields in Wyoming, Colorado, Oklahoma and Kansas.