POLSON — A legislatively mandated pilot program designed to enhance protection from invasive mussels in the Flathead Basin is facing challenges on two fronts.

As part of HB 622, the Legislature gave the Flathead Basin Commission authority to establish and manage the Upper Columbia pilot program. The program would add more certification stations, track vessels that require decontamination, and add the use of automated inspection and detection devices.

The commission also could petition the state’s Fish and Wildlife Commission to adopt rules for the Flathead Basin that would require inspection of all vessels before they launch; prohibit or restrict some vessels, including waterborne airplanes and aquatic weed harvesters; and close waters where invasive mussels have been detected until a containment strategy was implemented.

The pilot program would have been paid for by requiring boat owners launching boats in the basin to purchase a sticker. The sticker program was expected to raise between $1 million to $1.5 million.

But Montana Fish, Wildlife and Parks officials said the legislation did not provide that agency with the authority to write the rules that would require boat owners to purchase a sticker.

FWP Chief of Operations Mike Volesky said the bill’s language doesn’t include the word "mandatory." It also doesn’t provide for any penalties should boaters refuse to obtain the sticker.

“Our attorneys have looked at it and have determined the bill doesn’t provide the department with the legislative authority to create a mandatory program,” Volesky said.

The challenge for the pilot program only begins there.

The Montana Department of Natural Resources and Conservation recently recommended that the Flathead Basin Commission’s state-provided budget be cut to zero as part of the current round of budget cuts being proposed to the governor.

The commission is the linchpin to make the pilot work.

Don't be the boater who brings mussels into Montana

The Flathead Basin Commission was established in 1983 by the Legislature to protect water quality and the natural resources of the Flathead Basin. Its membership includes state, federal, tribal and local representatives, as well as representation from British Columbia.

Its accomplishments include helping to stop a proposed coal mine on the North Fork of the Flathead River in British Columbia, working to establish water quality targets for Flathead Lake, and passage of detergent phosphorus ban in the Flathead Basin. Since 2008, the commission has been a leader in the work to prevent the establishment of aquatic invasive species, including mussels.

The commission has one employee, and is administered through the DNRC. Tubbs recommended eliminating its state-allotted annual budget of $148,932.

Tubbs said while he appreciates all the good work the commission has accomplished over the last 30 years, the need to make additional cuts into his department’s budget required him to make difficult choices.

Tubbs was required to cut almost $3 million for the biennium. He said the DNRC already has fewer full time people working for it than when he took over as director in 2013.

“We were starting these cuts from an already deep hole,” he said.

In making his decision, Tubbs said he considered the commission’s current focus on aquatic invasive species and FWP’s opinion that it didn’t have the authority to create a new funding source through a boat sticker program. In addition, the Legislature passed a second bill that provided FWP with nearly $7 million a year over the biennium to beef up its efforts to control and prevent aquatic invasive species.

Before the passage of that legislation, Tubbs said the Flathead Basin Commission did a good job of filling the gaps not covered by FWP.

“Today I can stand and say that they (FWP) can fill that gap,” Tubbs said. “With a $6.5 million-a-year program coming out of the 2017 Legislature, they added up to something like 34 check stations, set up decontamination stations on Canyon Ferry and Tiber, added a new bureau chief focused on AIS, and created the Upper Columbia River Conservation Council focused just not on the Flathead but all of western Montana. That, all combined together, tells me we had resources for the fight against aquatic invasive species that we did not have before.”

With that in place, Tubbs said the state can provide the resources now being provided by the Flathead Basin Commission without requiring him to cut additional staff from other programs.

Flathead Lakers Executive Director Robin Steinkraus urged the state to reconsider its decision to eliminate funding for the commission. The nonprofit, grassroots organization dedicated to protecting the clean water, healthy ecosystems and quality of life in the Flathead Watershed has about 1,500 members.

The commission’s multi-jurisdictional membership is uniquely qualified for coordinating water quality protection and defending against invasive mussels in the Flathead Basin, Steinkraus said. The commission’s executive director and sole employee, Caryn Miske, has a long history of securing other funds that far exceed the state’s investment.

Eliminating that position would make “it virtually impossible for the FBC to function without dedicated staff to provide coordination, implement the commission’s decisions, write grants and work with partners in the watershed,” Steinkraus said. “Maintaining a functional FBC will continue to return abundant long-term natural and economic benefits for our watershed, the state and the entire Columbia River Basin.”

Without the base funding provided by the state, Miske said the commission’s future would be in doubt. While there have been suggestions made that the funding could be made up through a fundraising effort, she said that would likely prove difficult.

“People typically want to fund on-the-ground type of projects,” she said. “They don’t want to fund what they perceive as overhead.”

Tom McDonald believes the more boots on the ground the better for keeping aquatic invasive species out of the Flathead Basin.

The Confederated Salish and Kootenai Tribes’ fish, wildlife, recreation and conservation manager supports the measures that would be added through HB 622 and managed by an organization that has proven itself over the years.

McDonald said the Flathead Basin Commission already has a good track record on protecting the Flathead River Basin that plays such an important role for the tribes.

When mussels were first found in the state last year, McDonald said several months went by without very much communication to the tribes from the state.

“Unfortunately, they didn’t include us at first,” he said. “We generally didn’t know what was going on between December and February.”

Creating a redundant system of check stations through provisions found in HB 622 would help create the firewall needed to ensure that mussels don’t gain a foothold in the Flathead Basin.

“We want to see a more robust program,” McDonald said. “We know that people will sometimes make mistakes. Sometimes it’s good to have a program that’s redundant so those mistakes can be found. …This is going to have to be something that’s in place forever. We need to be collaborating to ensure that all entities are involved.”

Josh McCloud heard something pawing up by the rooftop, but it wasn’t reindeer. 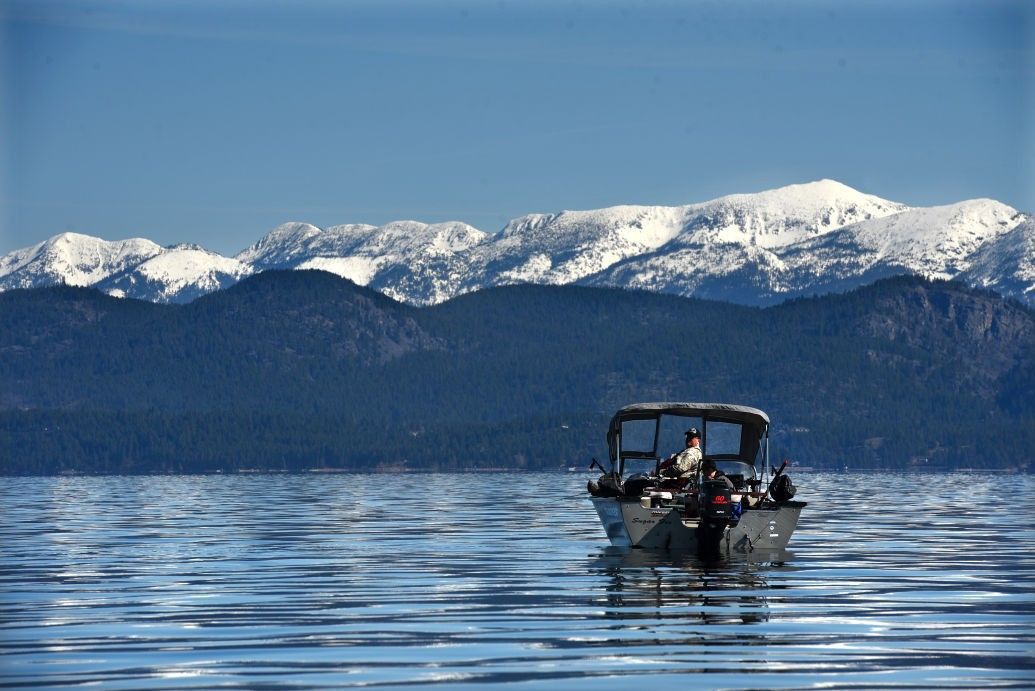 So far, no one has found any indication that invasive mussels have found their way into Flathead Lake. 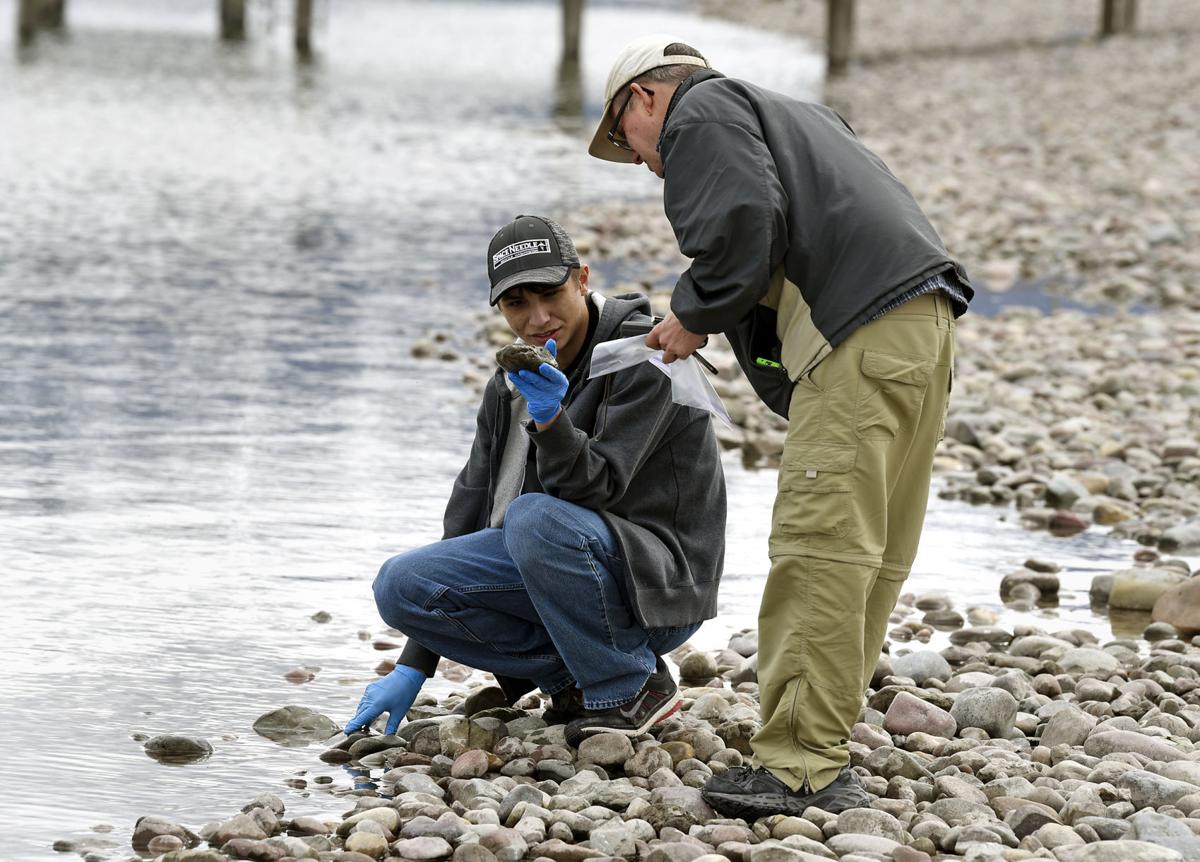 Donovin Hanken, a sophomore at Arlee, and Martin Zobel, right, of the CSKT Natural Resource Department, look for any signs of zebra or quagga mussels on a rock on the shore of Flathead Lake earlier this year. Students found mostly snails and other small animals but no invasive species.