President Joe Biden recently indicated support of further protections for gray wolves, although details on his position are not entirely clear.

Biden appeared with Dr. Anthony Fauci on "Brave Wilderness," an outdoors program for children that airs on YouTube with more than 18.7 million subscribers. The show typically focuses on wildlife and learning about different species and habitats.

The president and Fauci appeared as guests on the show to answer questions from hosts Coyote Peterson and Mark Vins about COVID-19 vaccines and the summer travel season. In the middle of the 12-minute clip, Biden praises the show for talking to kids about the importance of environmental protections before beginning the first of several comments on wolves.

“One of the things I’m getting from my grandkids, some of them are really little, calling me and saying, ‘Pop, they’re going to kill all the wolves, they’re killing the wolves, Pop,” Biden said. “Why’s that happening, Pop?’”

While the president did not specify what prompted the remarks, wolves have become a national issue in recent months after a hunt in Wisconsin far exceeded the pre-established quota and Montana and Idaho passed laws aimed at reducing wolf numbers.

Montana Gov. Greg Gianforte also made national news after he trapped and shot a wolf near Gardiner without taking a state-required certification class. The governor was issued a written warning by state game wardens but allowed to keep the hide and head.

Peterson later shared that one of his favorite shows featured the Colorado Wolf and Wildlife Center, which he felt was important to highlight “atrocities to wipe out wolves” and that the animals “need protections more than ever.”

“I’m in. I’m in with you,” he said, going on to request the hosts’ input on at-risk natural resources.

Biden also noted that he is a dog lover and that domestic dogs were bred originally from wild wolves. He also mentioned that he had spent time with wolves on two occasions, one being a wild wolf and another an apparent joke about politics. He did not elaborate on his experience with a wild wolf.

Attempts to contact the White House to ask if the president favored Endangered Species Act listing for wolves were not successful.

When asked about the president’s remarks, Republican Gov. Greg Gianforte’s office indicated that wolves in Montana should remain under state control.

“We look forward to learning what precisely the president means. That said, wolf populations are recovered in Montana, and accordingly, the state will continue to responsibly manage that population,” a Gianforte spokesperson said.

Ultimately, Biden does not have unilateral authority to invoke endangered species protections. That decision falls on the U.S. Fish and Wildlife Service under the Department of the Interior, which would launch a listing process that could last years.

Late last month a trio of environmental interest groups petitioned the administration in invoke an emergency order re-listing wolves in response to actions in Montana and Idaho. The federal government has not yet responded.

The administration said in January it would reconsider an order under former president Trump removing federal Endangered Species Act protections for wolves in the Lower 48. The delisting prompted Wisconsin to hold a wolf hunt, which officials halted after three days with hunters killing 216 wolves — far exceeding the quota of 119.

Montana and Idaho, which have had wolf hunting and trapping seasons dating back to 2009, also passed laws aiming to reduce wolf populations in each state, which combined have an estimated 2,700 wolves.

Another law allows wolf trappers and hunters to be privately reimbursed for their costs of killing a wolf.

The final law directs state officials to reduce wolf populations to “sustainable” numbers, including consideration of baiting, night hunting on private land and unlimited wolf take by an individual in areas with high wolf densities. The law does not define "sustainable" and state officials do not expect to identify a specific population target.

Idaho’s new law signed by Gov. Brad Little makes several changes for hunters and trappers as well as providing funding toward the hiring of private contractors to kill wolves. The law allows hunting and trapping of unlimited wolves on a single license, hunting at night and the use of snowmobiles, ATVs and helicopters.

Proponents of the laws have said wolf populations have grown extensively in many areas and are negatively impacting big game herds and livestock.

Opponents argue for the value of wolves as part of a natural ecosystem, also contending that some of the new hunting and trapping methods cross ethical lines.

Wolf populations surged in the 1990s in the Northern Rockies following transplants in Yellowstone National Park and Idaho as well as natural repopulation. Federal officials first delisted wolves in Montana and Idaho in 2009 — a decision overturned a year later in court. In 2011, Democratic Sen. Jon Tester of Montana and Republican Rep. Mike Simpson of Idaho added a rider to a budget bill delisting wolves in the region.

A law that passed with bipartisan support in 2005 allows the vote of an elector who returns their completed absentee ballot and then dies before Election Day to be counted.

The 50-year-old woman was imprisoned at the Montana Women's Prison when she died June 8.

The notice alleges that new laws expanding trapping could lead to unintentional injuries and killings of grizzlies and lynx, which are both listed as threatened under the Endangered Species Act. 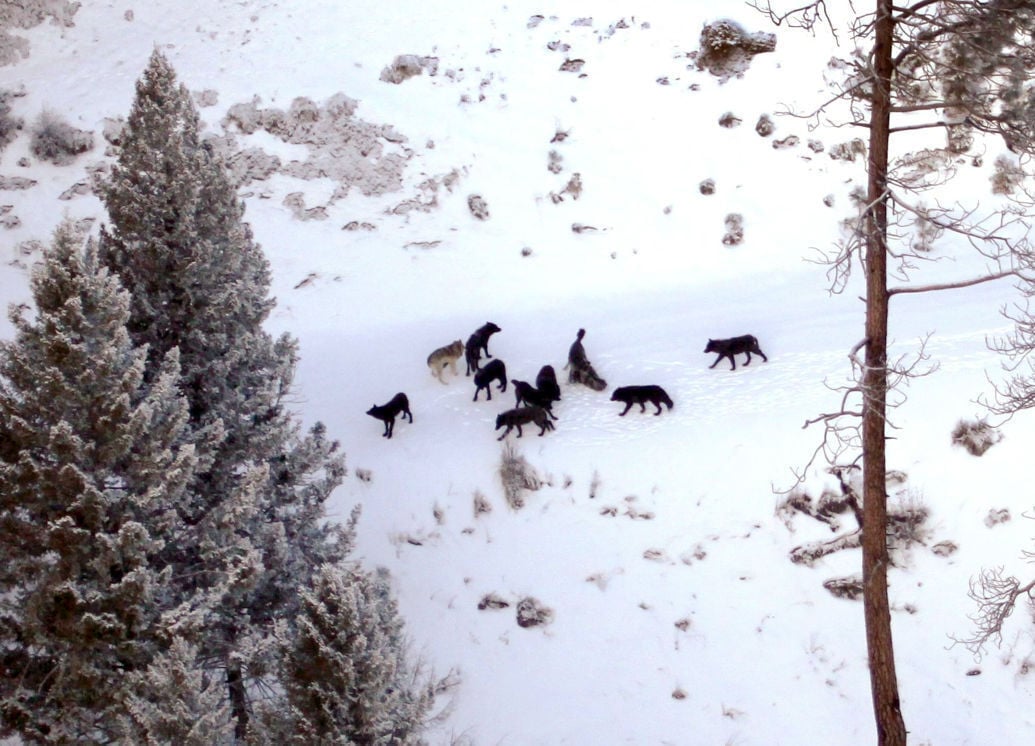 Wolves from the Welcome Creek pack prowl the Sapphire Mountains south of Missoula in 2011.

President Joe Biden speaks about the COVID-19 vaccination program Wednesday in the South Court Auditorium on the White House campus.