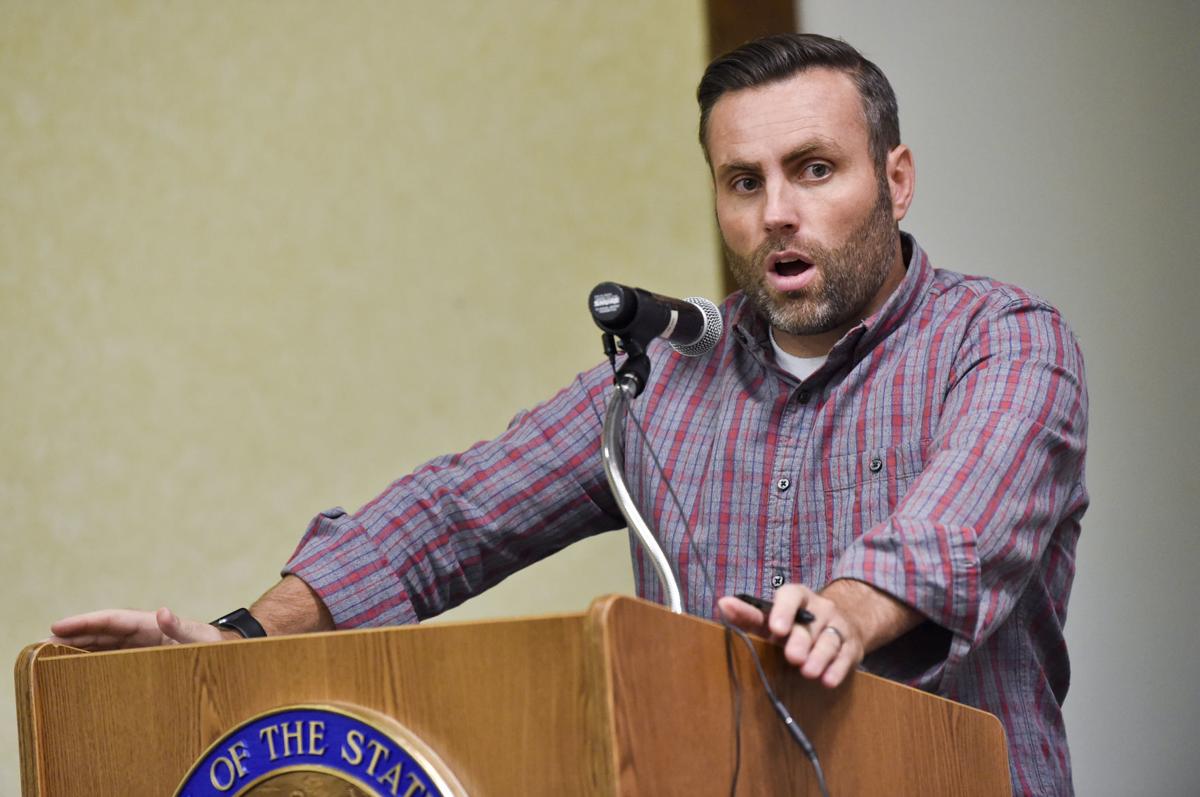 Corey Hickman of the Chrysalis Therapeutic Boarding School, comments on proposed rules pertaining to private alternative adolescent residential programs at the Department of Health and Human Services on Thursday. 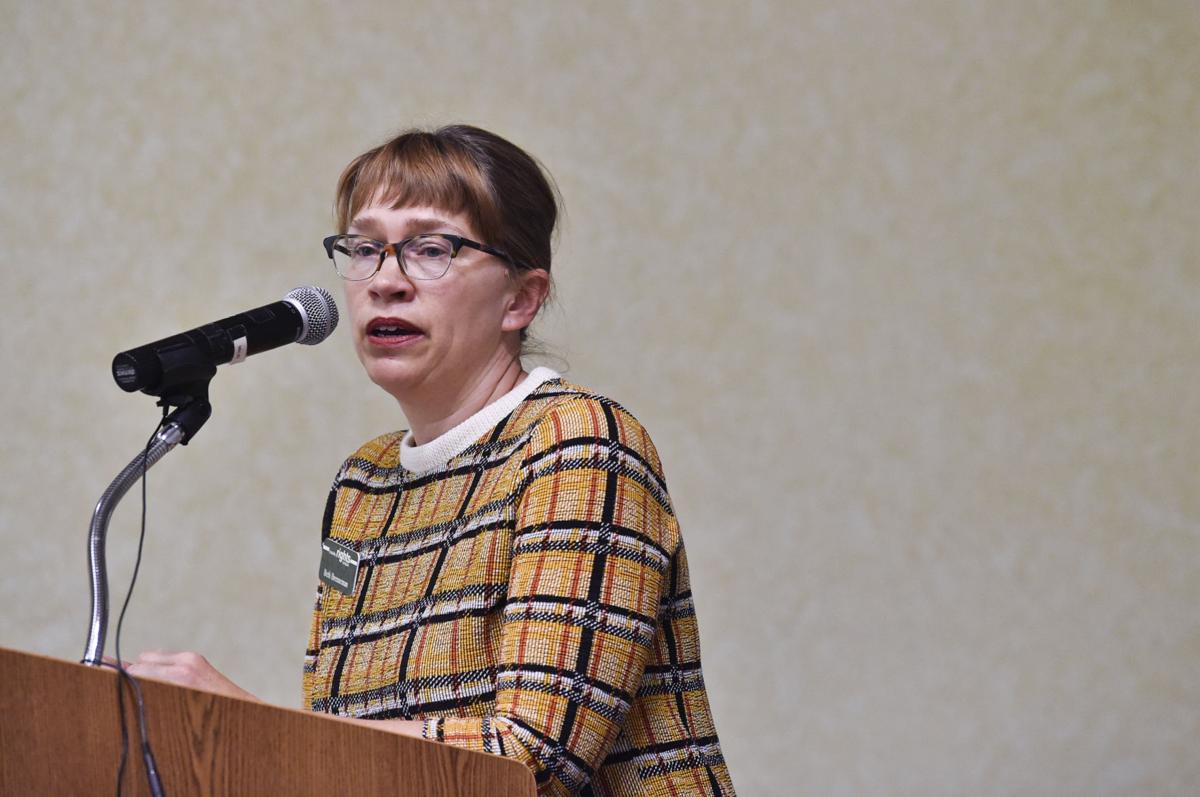 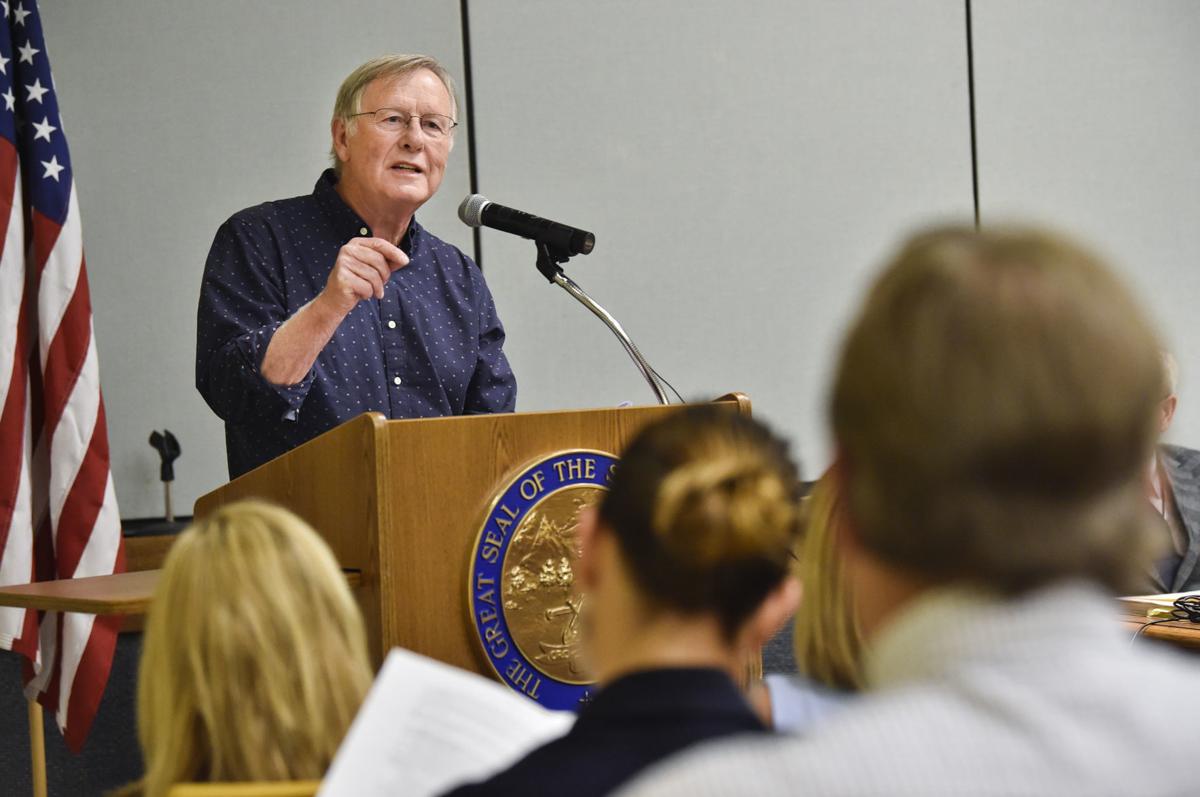 HELENA — Directors and operators of private teen treatment programs in Montana took more than two hours Thursday to air concerns with the new rules proposed by their new state overseers.

The Montana Department of Public Health and Human Services, which took oversight of the industry in July, held a public comment hearing in Helena to hear from program owners and others after releasing the proposed rules in August.

Many of those who spoke Thursday said they embrace the new regulations, as they offer accountability.

“It will raise the bar for programs in Montana, which will only help us,” said Corey Hickman of Chrysalis, a therapeutic boarding school for girls near Eureka.

A handful of conditions in the proposed rules, however, met with contention during the hearing. Most who objected to the new measures focused on staff-to-participant ratios, layers of background checks, and removing restrictions on when participants can call their parents during early stages of treatment.

A few argued against the requirement that any allegation of abuse and neglect from a participant be forwarded immediately to the health department to begin an investigation that could potentially lead to all the participants being removed.

Many students don’t want to be in the program in the first place, Hickman and others said, and so raising a false allegation could quickly become “their ticket out.”

“Every kid that comes into a program is going to be making some report of abuse,” said state Rep. Bob Brown, a Thompson Falls lawmaker and former staffer at a now-shuttered program in Sanders County.

Since the state began regulating the private teen treatment industry in 2005, program operators have pushed back on regulatory measures that would limit their ability to develop new practices for treating children with specific needs. This creative programming is the bread and butter for outfits that say they are the only ones to serve the needs of children coping with issues such as  fetal alcohol syndrome or reactive attachment disorder. And since 2005, the programs had essentially been operating under their own rules.

Before new laws were approved by the Legislature this year, the programs were regulated by a board whose majority comprised program owners and operators. Despite numerous complaints over the years, no significant sanctions were leveled against any programs.

Less than a month after DPHHS took over regulation of the programs, the agency suspended the license of Ranch for Kids in Rexford and removed all 27 children there, citing allegations of abuse and neglect. Ranch for Kids has challenged the suspension and contends its license should be reinstated.

Before Thursday’s public hearing, Erica Johnston, operations services branch manager at DPHHS, met with media members for a briefing on the proposed rules. She said the proposed rules aren’t made to restrict a program’s ability to develop its own treatment methods, but said the rules do bring clarity to what the department considers “minimum standards.”

“Certainly when you make some significant changes to how programs are regulated, there may be some providers that aren’t able to meet those minimum safety standards,” she said. “But I think we can all agree, given the recent situation with a facility that has been operating for a while in Montana, that we can’t take the safety and health of participants served here too seriously.”

Johnston said DPHHS would work with programs with less resources to ensure they can meet the department’s minimum standards, but that its main priority would be the safety and health of the facility. She said the department is not currently considering the suspension of any other program’s license, but declined to say whether any programs besides Ranch for Kids are currently under investigation.

The new rules give authority to the health department to conduct unannounced inspections, while previously the labor department’s board rules gave programs a seven-day notice before inspections. The proposed rules also lay out a clear process for revoking or suspending licenses and routes for programs to seek reinstatement, like Ranch for Kids.

Bill Sutley, executive director at Ranch for Kids, said after the hearing he has since lost a number of staff and relocated the facility out of an old school building in Rexford and is considering a new site while the process over his license is ongoing. A hearing to revoke or reinstate his license had not yet been set on Thursday.

Sutley said during the hearing that he looked forward to communicating with DPHHS in its final drafting of the new rules, but still issued a shot at the department.

Beth Brenneman, an attorney with Disability Rights Montana, who spoke as a proponent for the new rules, said the organization was “overall very happy,” with the rules, but asked for the department to expand on a few definitions. Brenneman said she had been involved in examining the programs in Montana since the first regulatory bill was written by Paul Clark, a Trout Creek Democrat who also runs a program.

While many who spoke as proponents or “other” still raised issue with the new rules, the only person who signed up to speak as an opponent during the hearing was Rep. Brown, who tied the success of the programs to their ability to create unique treatments.

During the legislative session in April, Brown told the Missoulian that program owners in his district had said extensive regulation could force them to shut down. Indeed, some of the new rules set limits on water temperature and square-footage per participant, although the staff-to-participant ratio seemed to stir the most concern.

On Thursday, he said he had not recently heard from program owners on the proposed rules, but he was still concerned about the structure of the measures offered by DPHHS.

“The individuality of each program is what makes it a success for one student or another, and that’s been my concern all along,” he said. “If it gets to be too generic or too clinical or too institutional, I think that’s where we start to cross that line.”

Still, Brown said in testimony that the “main objective” is the safety of troubled teens. He pointed out during testimony how one rule may in fact create risks for children: If a staff member is simply accused of abuse, operators are required to report that allegation to the health department, which in turn has the authority to suspend operations for the entire program. A program director might weigh their license over the allegations of participants and start hiding things from the department, he said.

“We have to have a set of rules that everybody can work under and work with,” he said. “The main objective is to keep these kids safe.”

Ranch for Kids fights license suspension after removal of 27 kids

The Ranch for Kids, a private program for troubled youth in Rexford, is contesting the suspension of its license.

In an apparently unprecedented action, the state of Montana removed 27 children from the Ranch for Kids in Lincoln County on Tuesday morning.

A new wing at Sentinel High School is nearly finished and already playing host to the next generation of engineers and computer scientists.

The Missoula Police Department on Friday named two officers who responded to a drug activity call in which the suspect was shot and killed. Officers Chris Proper and Eric Weber have been on administrative leave with pay since the shooting.

A lawsuit alleging abuse and neglect has been filed against Ranch for Kids, a private program where state officials removed all 27 children in July.

A new set of rules is in place for private alternative residential programs for troubled kids and teens in Montana.

Licensure for a troubled youth home in northwest Montana has been permanently revoked.

Corey Hickman of the Chrysalis Therapeutic Boarding School, comments on proposed rules pertaining to private alternative adolescent residential programs at the Department of Health and Human Services on Thursday.