DEER LODGE — Gathered in the Elks Lodge on Main Street in late September, Montana State Prison staff, city officials and community members assembled for a town hall to exhaust some frustration about a rumor that the prison may be relocated.

Deer Lodge Mayor James Jess quickly quashed the scuttlebutt, telling the crowd Gov. Greg Gianforte had assured him the prison would not leave.

The news quieted those concerns, but the meeting carried on. The tension on display at the town hall that night did not flare up in a single day over a stray bit of misinformation. For years employees have grown more vocal about their resentment toward the work culture at the prison, and that frustration spilled out into the public last year.

The prison has anchored Deer Lodge for more than 150 years, nearly 20 years longer than statehood. The Montana State Hospital just 16 miles down the road in Warm Springs has also been around since the 1870s in some form.

Generations of families have worked at the prison simultaneously, such as union president Cathy Clark and her 21-year-old son, a correctional officer there. The reliance on that kind of community-employer relationship is familiar in this valley, where down the road Anaconda was devastated in 1980 when the Atlantic Richfield Co. announced it would close the copper smelter, delivering an unquantifiable blow to a proud company town.

"I can tell you where I was standing, who I was talking to, what I was wearing the day they closed the smelter," Quint Nyman, deputy executive director of the state employees' union, told the crowd in September. "I know exactly where I was, I know which direction I was facing when we got the news.

The state prison and hospital have been fixtures in the news over the last year as staff exoduses threaten the ability of the state to meet its obligations.

Roughly a month before the town hall, a corrections officer had alleged a felony kidnapping charge against his supervisors who refused to let him off his post at the end of his shift, a symptom of the prison's thinning ranks (the county prosecutor declined to file the charge, saying it was likely a labor issue). A month later, prison staff held an informational picket outside the prison to raise awareness about what they called an “adversarial” relationship with management.

In response to the mounting problems, the 2023 Legislature has wasted little time diving into proposals to recruit and retain workers.

The Montana Department of Public Health and Human Services, for example, is asking legislators to approve $16 million in compliance upgrades. Several longtime employees told the Montana State News Bureau last year they had left their jobs there because the facility was so far from compliance that working there amounted to risking their nursing licenses.

Rep. John Fitzpatrick, a Republican from Anaconda, this year is sponsoring House Bill 13, which would deliver a $3 hourly raise or 8% pay hike, whichever is greater, to state employees over the next two years. Employees would also receive a one-time lump sum payment of up to $1,040.

Fitzpatrick is savvy to the legislative process as the former director of government affairs for NorthWestern Energy, headquartered in Butte and another company tied to the dynastic employers of the region's past. He was also a psychiatric technician at Montana State Hospital in 1966 at age 17.

“The state never bothered to check age (back then), whereas the smelter did and you had to be 18 to work on the Hill,” Fitzpatrick said in a recent interview.

Several state lawmakers have direct ties to the institutions of the Deer Lodge Valley. Rep. Greg Frazer, a second-term Republican, was raised in Deer Lodge and is a mental health technician at the state prison. Frazer was also at the September meeting and spoke about how the staff shortage and other frustrations have vexed his ability to deliver mental health services to inmates.

"When your wages are competitive with the fast food industry, people are going to go where it’s safer, where it makes more sense to them," Frazer said in an interview last week. "We have to get the wages up so we can attract more employees."

The raise applies to all state employees, but introducing the bill on the Legislature's first day in action, Fitzpatrick emphasized the prison and state hospital employees in his opening remarks. In an interview with the Montana State News Bureau, Fitzpatrick said the state hospital does not animate neighboring Anaconda as the state prison does to Deer Lodge; indeed, nearly half of the staff in Warm Springs are contracted, short-term employees.

“But Warm Springs is still a major employer in Anaconda,” he said. “The state payroll is undoubtedly the largest payroll in the county, as is Powell (County).”

According to data from the state human resources division, Powell and Deer Lodge counties combine for more than 800 state employees, a huge margin for rural counties that are typically in the double digits.

Butte has historically been a big contributor to the state's workforce in the Deer Lodge Valley, and Rep. Donavon Hawk, a Butte Democrat, said family names there have become associated with corrections work.

"Growing up in Butte it's a lot of families have had generations working at the state prison," he said.

Hawk said he has concerns about plans to expand the capacity for low-security housing at the prison considering the existing problems tied to low staffing, like the indefinite suspension of visitation implemented last year.

"Right now we got to worry about the workforce that we have there," he said.

Part of reason pay is so crucial is because the cost of housing, a problematic incline that's touched both the state's populous urban areas and its rural communities.

Terry Vermeire, a first-term Republican senator elected to the seat previously held by Democrat Mark Sweeney before his death last year, was a Deer Lodge County commissioner for a decade. He said Anaconda is taking opportunities to be proactive. The county has helped streamline the permit process for developers to build there, he said. Previously, the area's Superfund designation would scare developers off.

"Anaconda has really made the turn here in the last couple years," Vermeire said in an interview last year.

At the Elks Lodge meeting last year, Jess, the Deer Lodge mayor, said there's hope for the city to work with the state to develop some employee housing. But he also pointed to a local solution that's emerged in the state's more populous areas: changing zoning regulations to allow more multi-family housing.

"We can change zoning, we can assist development," Jess told the crowd.

Housing will be crucial in helping the prison stabilize its workforce, Frazer said. He said housing is an issue the Legislature can take up, although he hasn't seen anything in the works yet.

"Everywhere there’s a housing crisis, but in the Deer Lodge Valley we need to have affordable housing for folks who want to make a career working at the state prison," he said.

If the prison suffers, Frazer said, so does Deer Lodge.

"It’s comparable to a symbiotic relationship," he said. "If one isn't there, the other dies. The prison is absolutely integral to Deer Lodge and the Deer Lodge Valley."

Some issues that drove the Deer Lodge community into the Elks Lodge that night, however, can't be resolved with legislation. According to several staff who have spoken to the Montana State News Bureau, the prison's internal culture is the chief reason employees are leaving the prison, and those complaints about the facility spread fast and hang tightly in a small community like Deer Lodge.

"There has to be a change in culture where everybody is working together," Frazer said. "Until that culture shift happens, which, I don’t know where to begin, we’re going to continue having staffing issues."

Hamilton Sen. Theresa Manzella, who chairs the Montana Freedom Caucus, said Thursday’s event was “all about” trying to get the group’s message out.

The reforms come with some subtext as the state still faces litigation against bills the 2021 Legislature passed, which has featured some procedural maneuvers Republicans have rebutted as unfair. 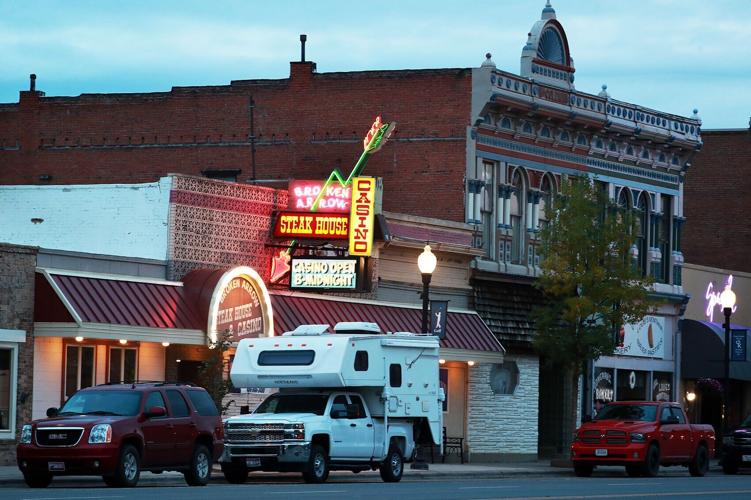 A neon sign above a restaurant in Deer Lodge welcomes customers on a Friday night in October 2022. 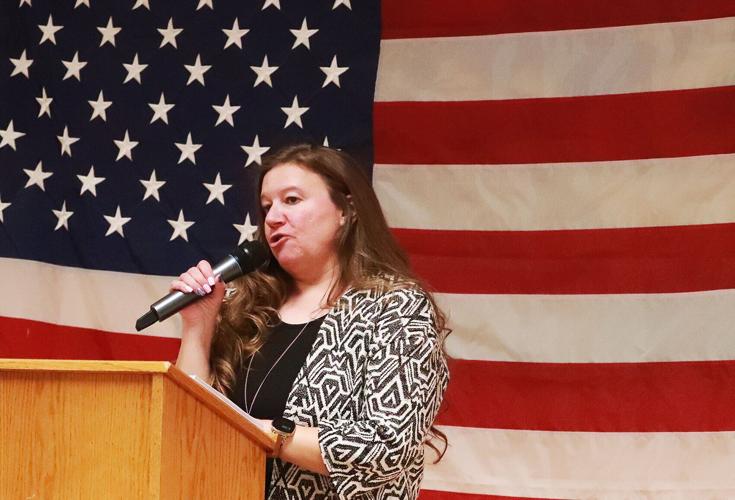 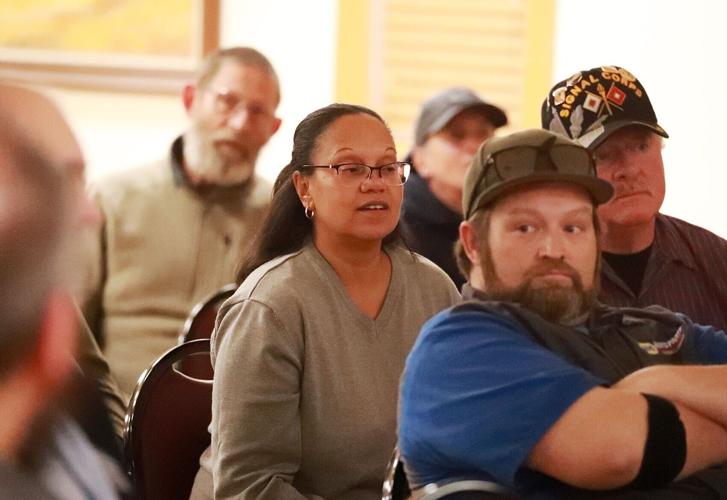 Wendy Zuber, a former prison employee, listens during a community meeting with union members on Sept. 30 in Deer Lodge. 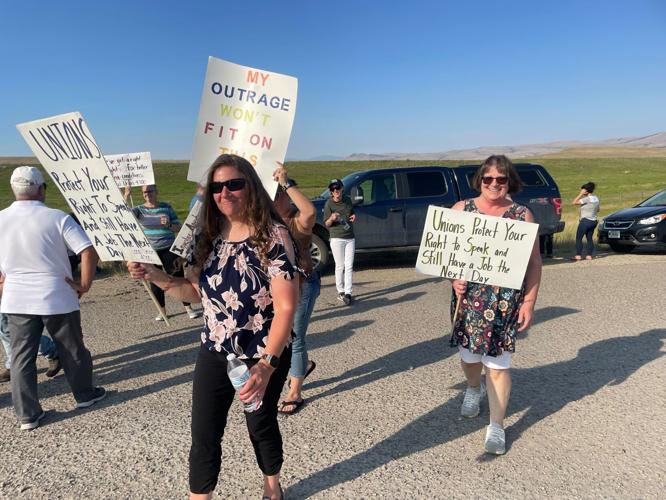 At an event outside the Montana State Prison in Deer Lodge in August 2022, Local 4700 President Cathy Clark, along with other prison employees and supporters, raised concerns about the treatment of workers by management. 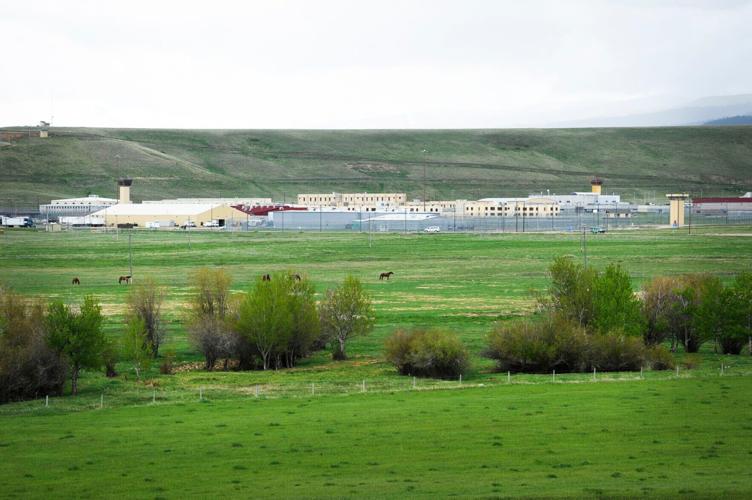 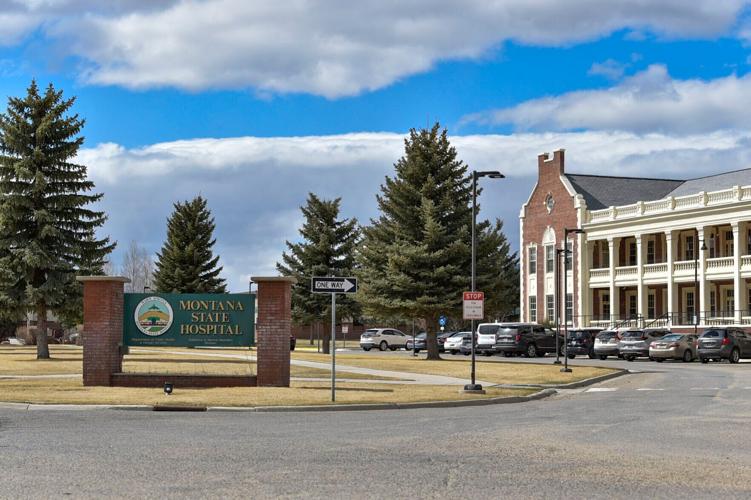 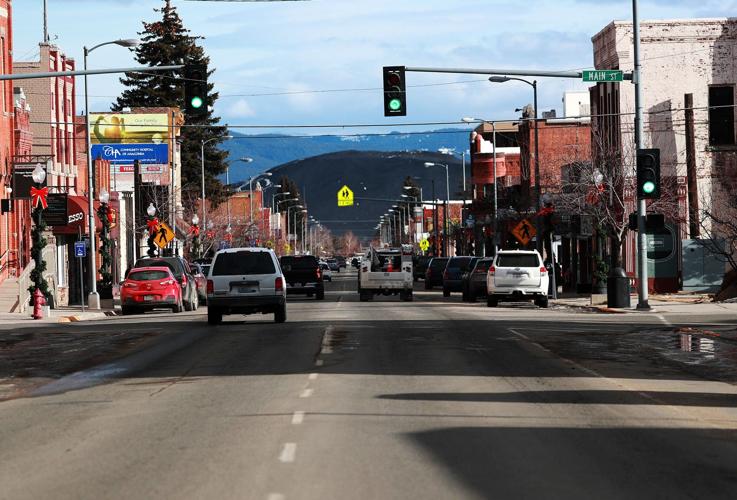 Long shadows stretch out across Montana Highway 1 in downtown Anaconda in this file photo.